A Year (Plus) of COVID-19: How the Pandemic Hit Food and Agriculture - Modern Farmer
Food & Drink, Health

A Year (Plus) of COVID-19: How the Pandemic Hit Food and Agriculture

A timeline of the most important dates and developments over the past year. 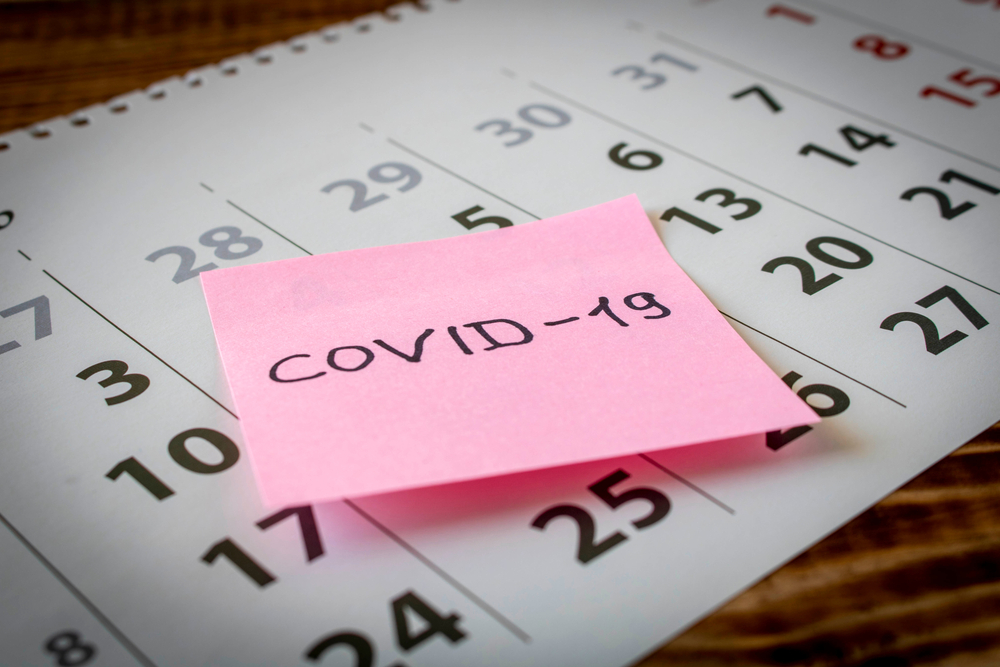 It’s been a truly wild year in food and agriculture.

To be fair, it’s been a truly wild year everywhere, one marked by massive societal and economic upheavals as a result of the COVID-19 pandemic—and, in the case of the United States, by the government’s response to the crisis. We’ve put together a timeline of some of the most important moments over the past year related to food and agriculture and its intersection with COVID-19.

January 20, 2020. The first official positive COVID-19 test in the United States is found in Washington state. It’s likely that there were other cases prior to this one.

January 31. On the same day that the WHO declared COVID-19 a public health emergency, we learned that American farmers had not been having a good year. Court documents revealed that the year before, in 2019, farm bankruptcies had reached their highest rate in eight years. Things were…not going to get better.

March 6. By this point, COVID-19 has begun to spread rapidly; many states have had a case, and those that haven’t yet are aware that they will soon. Schools have begun to close, but with that comes an added cost for millions of students who rely on free school meals. How will they get them if there’s no school? The USDA approved some waivers to try to get those meals to kids who qualify, but there were major gaps in the coverage. This would become a recurring theme.

March 11. The World Health Organization declares COVID-19 a pandemic. Tom Hanks announces he has tested positive; the NBA, after Utah Jazz center Rudy Gobert also tests positive, decides to shut down its entire season. Then-President Donald Trump gives an address, and directs the Small Business Administration to dramatically increase its funding. Some farms are included, but many aren’t.

March 15. The USDA’s first positive test is revealed, shutting down a wing of the agency. Some states, including Illinois and Ohio, announce that restaurants must either close or switch to an exclusively take-out or delivery system. In the following days, most other states would follow. This would prove to have massive implications for American agriculture: Many farmers, producers and other sectors of the industry sell mostly or exclusively to restaurants. Suddenly, a huge market was gone, and farmers and ranchers had no market for the food in their fields.

March 17. The USDA, in response to growing unemployment and hunger issues, announces a program to deliver shelf-stable meals to about a million Americans (this would be expanded later). The program was done in collaboration with PepsiCo and other corporations.

March 18. Farm labor, which had been scarce already, becomes much more unstable, as the State Department shuts down visa applications in Mexico—including for the much-needed H-2A foreign farmworker program. The fact that this happened right when much of the country was due to begin planting did not help matters.

March 23. Sanderson Farms makes the announcement that had seemed inevitable for weeks: a worker in the close quarters of a meatpacking plant had tested positive. This would mark the beginning of the meatpacking plant spread, which would soon force several plants to shut down.

April 1. It’s becoming clear by this point that consumer markets are doing some weird, unexpected things. Egg sales spike, owing to their utility and status as a panic essential. The market for seeds also goes nuts; it becomes increasingly difficult to buy seeds online, as folks begin stocking up for gardens.

April 2. Beef prices are going up, theoretically because of the pandemic. Yet ranchers are getting less money for their cattle than before. What’s the deal? Senator Chuck Grassley calls for an investigation into possible price fixing among the major beef producers.

April 7. The largest ethanol producer in the country, which also happens to be the largest in the world, announces that it’s shutting down several plants due to the pandemic. With most people working from home, there are fewer drivers on the road, and thus less market for ethanol. Some 40% of American corn is grown for ethanol; that market disappears.

Throughout April. Meatpacking plants find positive cases; with little way to stop them, they start shutting down. A gigantic one in South Dakota finds more than 400 positive cases. That plant, by itself, produces 5 percent of the country’s pork.

April 17. The USDA announces its big, $19-billion COVID-19 aid package. Most of that is straight-up cash to the agriculture industry; $3 billion purchases food for food banks. Later, investigation found that most of the money went to the biggest farms, rather than the farms in the most danger of shutting down. Also, USDA inspectors are getting sick, because the USDA hasn’t provided enough protection or guidance.

May 15. The House passes the HEROES Act, a huge new stimulus package. It includes vital money to keep the restaurant industry afloat, provide inspection services for even smaller meatpacking plants, aid to ethanol producers and a bump in SNAP funding. It would make a huge difference. It has absolutely no chance of passing the Republican-controlled Senate. It fails.

June 26. Alleging misconduct that resulted in negligent deaths, families of meatpacking plant workers sue Tyson Foods. Later, it would be revealed that Tyson managers bet on how many employees would contract the virus.

July. Drought hits big chunks of the country, especially in the Northeast, the West and in cattle country in and around Texas. Pasture land is looking grim. Also, the United States Postal Service has been crippled, and the effects are starting to show. Farmers, often in rural areas, rely on the mail service for equipment, inputs and all kinds of other things, including chicks, which don’t survive the delays.

August 11. The USDA expands CFAP, its COVID-19 aid program, to include all the crops that weren’t included last time for some reason, such as hemp and eggs.

Sept. 10. OSHA cites Smithfield and JBS plants for not protecting workers. The fines are technically the highest they can be, but only one citation is brought against each company, totaling around $30,000. This citation is widely understood to be so low as to be meaningless to the company and not effective as a punishment.

Sept. 18. The USDA announces its second round of funding, this time totaling $14 billion. Again, it primarily goes to row crop producers, who get a boost from newly high exports, but it is expanded to more specialty crops as well.

Nov. 9. The United States surpasses 10 million cases. It was already clear, but the US is by far the global leader in coronavirus cases.

Dec 21. The Trump administration announces a freeze in wages for H-2A workers, much to the outrage of labor advocates and workers. The workers are declared essential, are at extremely high risk and have little recourse for labor abuses, but they will be paid less. This will eventually be thrown out when President Joe Biden takes office, and it never goes into effect.

Jan 22, 2021. Shortly after President Joe Biden takes office, the USDA announces new food aid aimed at expanding access to and the quantity of food assistance. He also outlines a $1.9-trillion aid package, but it’s unclear if that will make it through Congress, and if it does, when that might be.

March 10. With millions vaccinated, albeit in a totally disjointed and confusing fashion, Congress passes a new COVID-19 aid package (over the objections of just about every Republican). It includes $23 billion in aid for food and farming, including some programs that had been needed for literal generations, such as debt relief for Black farmers and other groups that have been subject to systemic racism from the American government.

The past year has, for so much of American society, exposed the cracks that were already there, deepening them into chasms. The country reckoned with racism and privilege, with money and power, with corruption and incompetence. None of that was spared from the food and agriculture industries.

Major corporations profited off of dangerous labor, helped along by huge buyouts and insultingly low penalties for their behavior. Those who needed help the most—whether that was small vegetable farmers or those who qualified for the highest amount of SNAP benefits—were left out in the cold for months as Congress dithered over how much help was appropriate. When it arrived, it was often too late. The restaurant industry is crippled; it’s estimated that more than 110,000 restaurants and bars closed during 2020, and many will not come back. Farm income did okay, but as with the trade-war-infused 2018 and 2019 years, that was due to government payments, not sales.

Vaccinations are on their way at the time of writing. Biden recently announced that all American adults should be eligible by May to receive their first dose of a vaccine. We will begin the long and arduous process of reopening society. But the big question remains: Do we want this industry to look the way it did before coronavirus? Can we make it better, more fair, more sustainable and more equitable?

Popular
Alaskan Salmon Face a Stream of New MinesBecki Robins
7 Smokable Plants You Can Grow That Aren’t MarijuanaBrian Barth
Why Don’t We Eat Turkey Eggs?Dan Nosowitz
The Fertilizer Shortage Will Persist in 2023Shea Swenson
Goat Sex: Everything You Wanted to Know But Were Afraid to AskAndrew Amelinckx
Explore Modern Farmer
Related
Environment, Food & Drink
Where Has All the Mustard Gone?Chloe Faure
Animals, Environment, Technology
Alaskan Salmon Face a Stream of New MinesBecki Robins
Animals, Environment, Health
To Stop New Viruses Infecting Humans, We Must Protect Bat HabitatAlison Peel, Peggy Eby, Raina Plowright
Animals, Food & Drink, Lifestyle
The Great (Sticker Shock) ThanksgivingLindsay Campbell
wpDiscuz
We use cookies on our website to give you the most relevant experience by remembering your preferences and repeat visits. By clicking “Accept”, you consent to the use of ALL the cookies.
Cookie settings ACCEPT
Privacy & Cookies Policy