Seeds have been flying off the “shelves” of online stores. 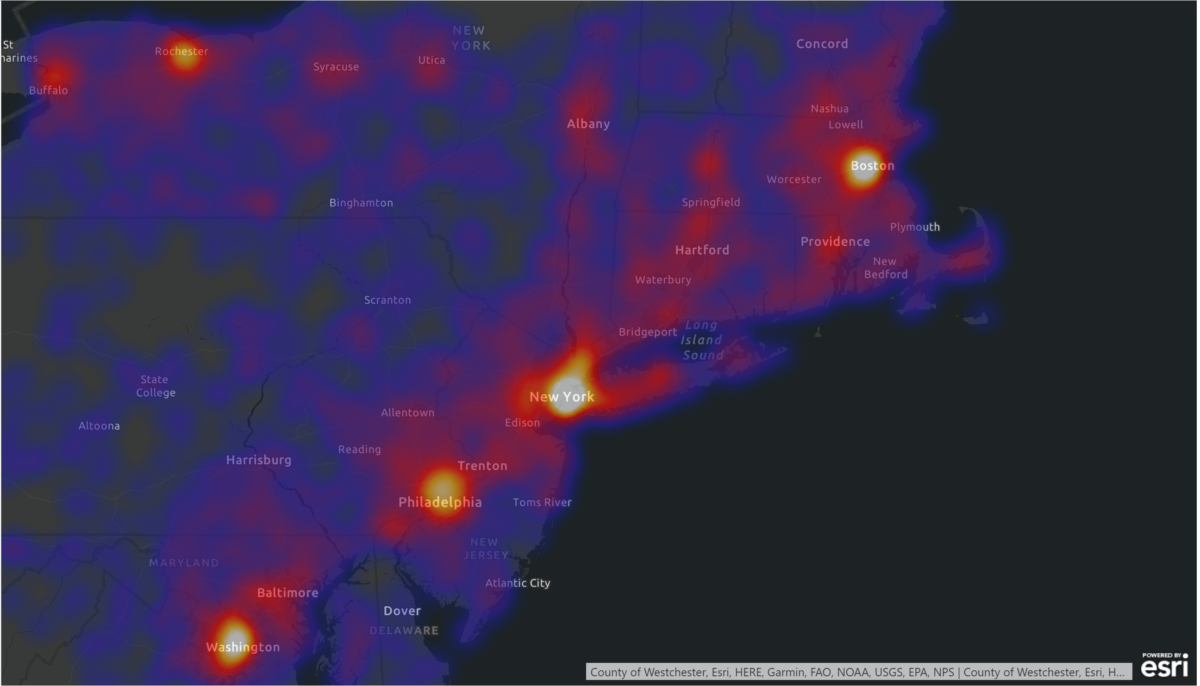 A heat map shows where Harris Seeds experienced a spike in sales in the northeast region from March 16 through to April 2.
Photography courtesy of Harris Seeds
Share
Tweet
Pin
Email
9K Shares

Seed sellers across North America have been overwhelmed by skyrocketing demand in recent weeks as home gardeners are preparing to grow their own vegetables in the face of the COVID-19 pandemic.

Starting around March 16, online seed stores saw a huge spike in orders for vegetable seeds, as fears emerged that the pandemic could threaten food security.

The increase in demand was so dramatic for Wayne Gale and his Canada-based business, Stokes Seeds, that they temporarily closed down their online store for home gardeners, in order to ensure they could fill all of their orders for commercial growers. Gale’s business received around 1,000 orders from home gardeners during the weekend before March 16, a period of time it would usually receive around 350 such orders. “And this is not our peak season. Usually our peak season is the second week of February,” Gale says.

Sellers say that many of their new customers are likely new to the world of gardening, and are cooped up in their homes with a lot of time on their hands. While seed growers think any time is a good time to start growing your own food, they say concerns over the food supply are probably driving a lot of the current interest.

Veseys Seeds, a mail-order seed company based in the Canadian province of Prince Edward Island, processed the same number of orders by the end of March than it would have completed by June in a normal year.  During that period, the company saw an average 335 percent increase over normal volume. One day last week it saw a 599 percent increase in demand.

“I think it’s a combination of factors, but it’s resulting in somewhat of a perfect storm here in little York, Prince Edward Island,” says John Barrett, the company’s director of sales, marketing and development.

The company, which prides itself on being able to turn around orders promptly, was running around 10 days behind near the end of March with around 12,000 orders.

The spike has created operational challenges for seed sellers, as keeping up with demand has been hard. Some were already short staffed, as employees were quarantined due to travel, or had to stay home with their children as schools closed. And some sellers would usually be winding down at this time of year and laying off their seasonal workers.

Seed companies have been largely unable to bring new employees into their warehouses to help with the backlogs, due to social distancing guidelines they are following. As has been the case with other industries, they have had to weigh efficiency with safety and do the best they can. 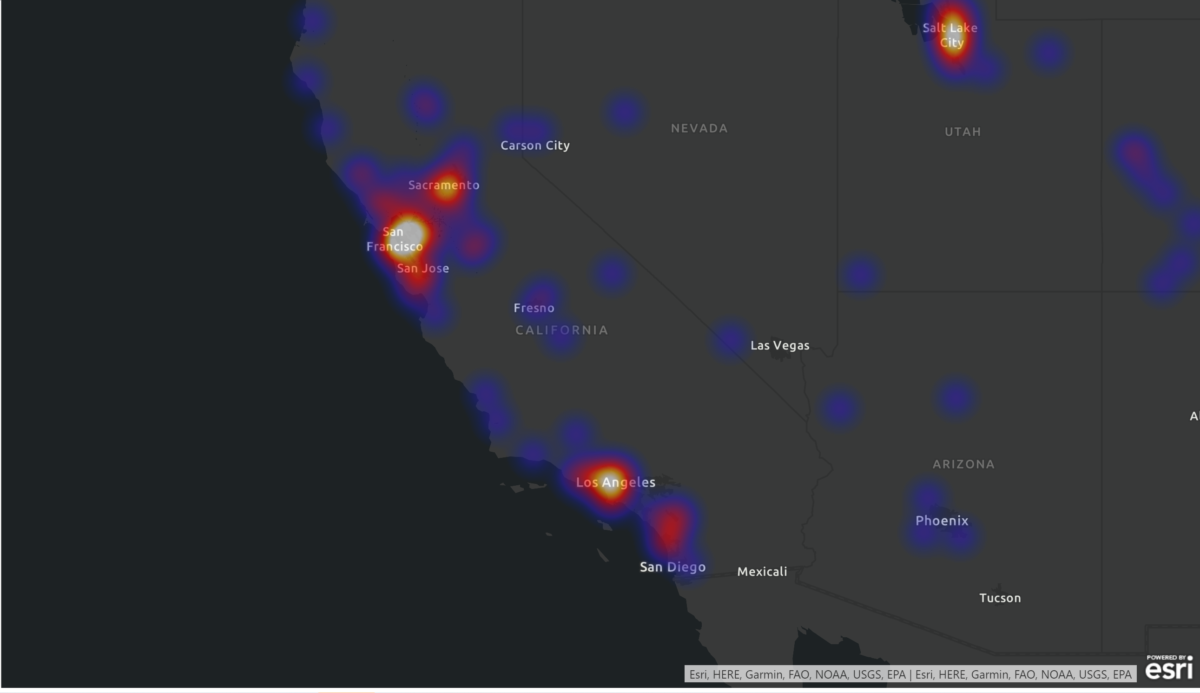 A heat map showing where Harris Seeds has experienced its spike in sales in California between March 16 and April 2. Image courtesy of Harris Seeds.

Ken Wasnock, the CEO of Harris Seeds, says that the majority of his company’s new demand has come from urban areas. The company has seen high volumes of sales to neighborhoods in New York City, where historically it hasn’t sold much seed.

Harris Seeds, which is based in New York, has experienced a 50 percent uptick in the home gardener part of its business, and like others, saw its volume of orders spike three-fold on March 16. The company also sells to commercial growers, and wholesale to other sellers. 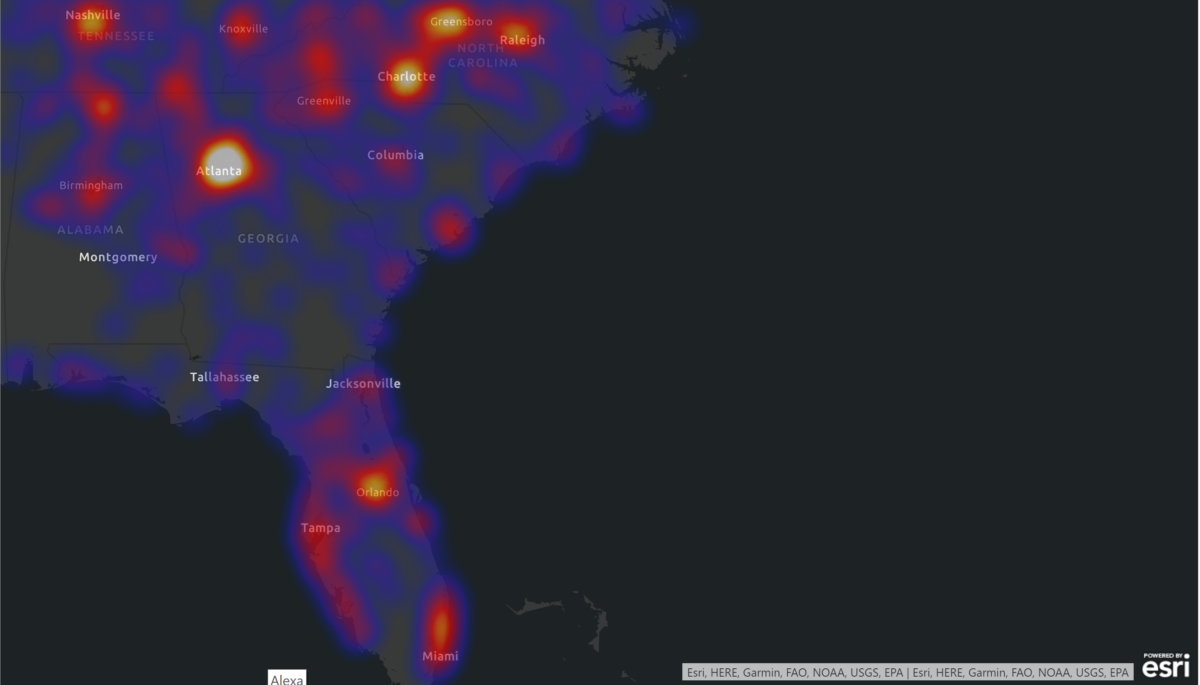 A heat map showing where Harris Seeds has experienced its spike in sales in the Southeast between March 16 and April 2. Image courtesy of Harris Seeds.

Wasnock says earlier in the spike, a lot of the orders were coming from doomsday preppers, who purchased sprouting kits that don’t require natural light. In the weeks since, he’s seen an increase in children’s gardening products, as parents try to plan activities and projects. Wasnock says that a high percentage of seeds people are buying are organic. Some of the more popular types of vegetable seeds ordered have included squash, zucchini, tomatoes and beans.

He says that what seems to be top of mind for many new gardeners is food security. From a seed seller’s perspective, it never hurts to start growing your own food, especially while governments across the world are struggling to figure out how the necessary number of workers will be available for the coming growing season. “I think it’s always good for people to grow their own food. I think that’s something we’ve largely lost as a society over the last 30 years or so,” Wasnock says. “So I do think that it’s always wise to do that.”

My client SandiaSeed.com has been selling out of many of their seeds, too!
If more gardens are born from this, that’s one good thing to celebrate! 🙂

Most veggies at the grocery store can be propagated from the leftover cutoff end simply put into a glass with shallow water.

No home grower seeds. What happens when the big boys can’t deliver food, and we can’t get seeds to grow at home? May want to ration some for the individual people who grow… Stay safe everyone.

I am a market gardener who learned decades ago to order seed in December or January to avoid backorders and sell-outs. I was happy to see some seed houses reserving their seed to commercial growers only, like Johnny’s Selected Seeds.

Been organic vegetable gardening for 20 years. I was lucky to acquire my seeds before the virus hit!