The lawsuit alleges that the company knowingly put employees at risk. 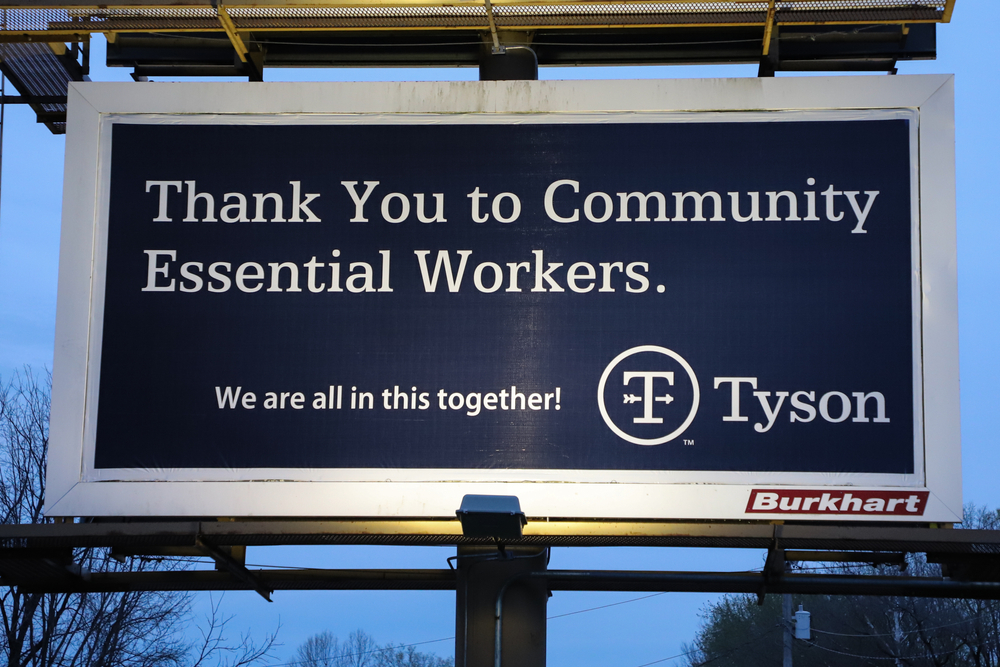 Meatpacking plants have become a focus of the fight against COVID-19. Working in one of these facilities is an inherently dangerous profession, especially during an airborne pandemic.

Amid plant shutdowns and reopenings, confused messaging on safety precautions and whether workers are actually allowed to stay home out of fear for their lives, meatpacking plants have been the site of tens of thousands of infections. Last week, reports the Des Moines Register, the families of three deceased meatpacking plant workers sued the plant’s owners, Tyson Foods, alleging reckless, unsafe, and fraudulent behaviors which led to those deaths.

At least 20,000 meatpacking plant employees have tested positive for COVID-19, and at least 74 have died. These plants, which require workers to engage in physical labor in tight quarters, have been recognized as extremely dangerous places since the COVID-19 outbreak hit the United States. But the plants, encouraged by the Trump administration, have been determined to stay open (or reopen, in many cases).

The owners of the plants—a small selection of gigantic corporations including Tyson, Smithfield Foods, JBS USA, and Cargill—announced that they would institute safety measures during the pandemic. Those included masks, gloves, clear plastic partitions, temperature checks, and physical distancing when possible. Those measures have not eliminated outbreaks of COVID-19 at meatpacking plants; individual locations continue to report hundreds of positive test results to this day.

The lawsuit, filed in Black Hawk County in Iowa, was filed by the families of three workers at Tyson’s Waterloo, Iowa plant, all of whom died from COVID-19. The Waterloo plant is Tyson’s largest pork processing facility in the state. The lawsuit accuses Tyson of moving far too slowly to implement safety measures, and operating without those safety measures while knowing how dangerous that could be. It also accuses the company of telling employees they would be safe at work despite knowing otherwise, of encouraging workers to come to work despite these dangers, of allowing sick or exposed workers to remain on the line, and of relying on measures (like temperature-taking) known to not be effective. (A fever can be an indicator of COVID-19, but isn’t always.)

A potential roadblock to the lawsuit gaining traction is, as The Counter notes, a lack of proper guidelines and restrictions from the federal government. In fact, even after multiple deaths at this location, an investigation found no violations at the Waterloo plant. This is not because the plant did everything it could to prevent the spread of the virus among its workers; it’s because the actual rules in place are likely too lenient and, somehow, optional. Tyson and other meatpackers have come under fire for mounting pressure to reopen during the pandemic, repeatedly stating the likelihood of a meat shortage if plants remain closed.

At the end of April, President Donald Trump signed an executive order compelling meat meatpacking plants to stay open as critical infrastructure, effectively shielding them from litigation as long as they followed the federal guidelines.

The families’ lawsuit will therefore have to find that Tyson broke these rules. One accusation within the lawsuit, according to the Des Moines Register, claims that Tyson shipped in workers to Waterloo from a different plant that had closed due to the pandemic, which Tyson had previously denied. Tyson, for its part, said it was saddened by the deaths, but that the plant had followed federal guidelines.

If they all closed down the world would be healthier. Smithfield and Tyson are both China. There is no police for the pork and chicken industry; they are their own police, so I don’t buy anything but organic. China exports chicken pieces to us, nothing with bone in, so don’t buy nuggets or boneless.

Related
Labor
California Farmworkers Embark on 335-Mile March for Voting RightsShea Swenson
Technology
Biden Aims to Bring More Farmers OnlineShea Swenson
Plants
Cultivating Crops, No Sun RequiredShea Swenson
Food & Drink, Labor
The CEO Who Wants Us to Care More About the Humanity Behind...Emily Baron Cadloff
wpDiscuz
We use cookies on our website to give you the most relevant experience by remembering your preferences and repeat visits. By clicking “Accept”, you consent to the use of ALL the cookies.
Cookie settings ACCEPT
Privacy & Cookies Policy