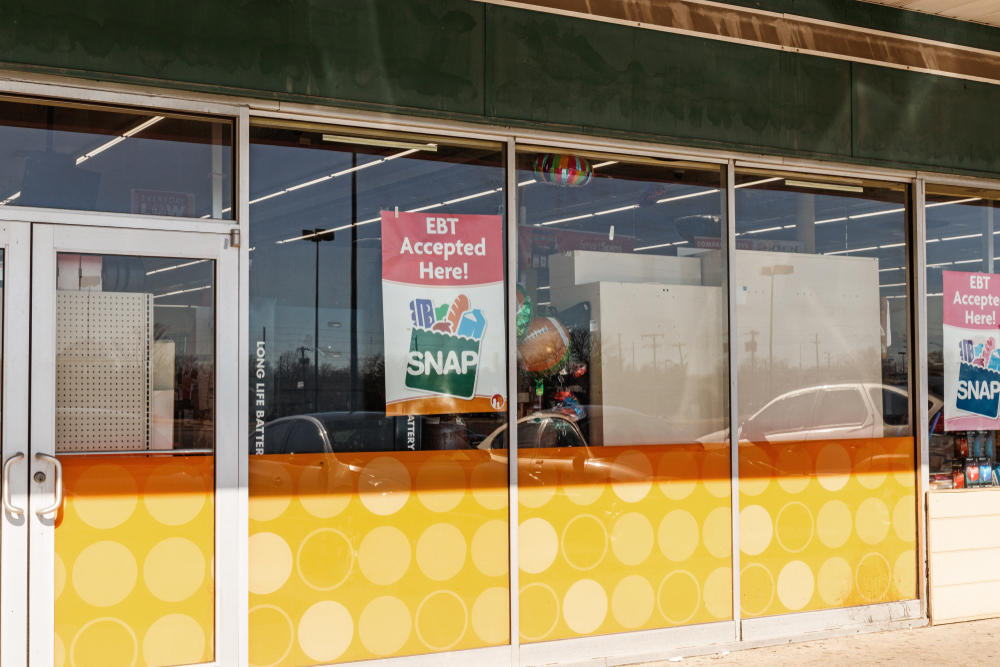 Since taking office, the Trump administration has attempted various times to slash SNAP, the program better known as food stamps.

The latest proposal would involve cutting off eligibility for households with certain assets, including home ownership and savings, reports the Washington Post. The new proposal, if approved, would cut out about three million SNAP recipients.

SNAP, which stands for the Supplemental Nutrition Assistance Program, has long been a target for Republican administrations, who routinely allege fraud and laziness among its recipients. In a call announcing the proposal, USDA officials specifically said the proposal was designed to close a fraud loophole exploited by Rob Undersander, a wealthy, conservative Minnesotan who perpetrated the fraud in order to show it could be done.

In fact, SNAP fraud is laughably low; the USDA’s own information finds that SNAP has one of the lowest fraud rates of any federal program, and that fraud is actually declining over time, thanks in part to digital EBT cards. It’s also one of the most efficient federal programs, with about 95 percent of funds going directly to SNAP recipients—meaning, only 5 percent is kept for administrative fees. SNAP is, by modern standards, a model program.

Yet the Trump administration has continuously attacked it. It has tried to propose a box of canned goods, a punishing work requirement (most SNAP recipients do work), and even broke the system that allows SNAP recipients to get fresh, healthy food (and support farmers!) at farmers markets.

The newest proposal would cut certain options in the current rules. There’s something called “broad-based categorical eligibility,” or BBCE, which essentially allows states to modify the federal rules, which were created in the 1950s and have not been adequately updated since. Conservatives paint these as “loopholes,” but in fact they’re modifications designed to modernize and localize the federal rules.

Under the current rules, states are allowed to automatically enroll people in SNAP who are receiving other benefits, including welfare. Most states take advantage of that rule; SNAP participation is lower than it should be, with many people who should be enrolled remaining outside the program due to disability, misunderstandings, or other problems. If the point of the program is to ensure people who need food get it, this automatic enrollment program is a great thing: it streamlines the process to ensure hungry people get these benefits.

Another one of the old options, like the automatic enrollment, allows states to suspend certain “asset tests.” Essentially, people aren’t eligible for food stamps if they have a certain amount of assets, like savings, bank accounts, and property. But states, at their discretion, can ignore that rule. Many have, because a blanket rule like this interferes with the primary goal of the program—to feed the food-insecure. An elderly, disabled person (most SNAP recipients are children, disabled, or elderly) might own a house, but due to a fixed income be unable to afford food. The fact that they own a house doesn’t make them capable of selling and moving, nor does it make them rich and properly fed.

There’s also the problem of geographic differences. The blanket federal rule caps the income limit for eligibility at 130 percent of the poverty line, but that’s a federal poverty line. For the urban poor in America’s most expensive cities, like New York, Los Angeles, and San Francisco, 130 percent of the poverty line is desperately, unsustainably poor. States have previously been allowed to waive that rule based on local needs; the cost of living for someone in New York City is simply not the same as it is for someone living in rural Oklahoma. The new proposals want to level that out, essentially removing another one of these options.

Here’s another problem: if states stick with that 130 percent rule, what happens if you’re making 129 percent of the poverty line, and then you get a small raise, taking you to 131 percent? Under BBCE, that change is smoothed: there’s a reduction in benefits, but it’s designed so that you’re still taking home more in benefits plus salary than you were before the raise. Under the new proposals? As soon as you hit that 130 number, you’re cut off. In many cases, that’ll mean that getting a raise will literally mean you make less money than before. (For more on this, check out this thread.)

There will be a 60-day comment period for SNAP, and this is expected to be vicious; the last proposal received over 100,000 comments. Food security policy folks say this proposal would overwhelmingly hurt the disabled, the elderly, and working families. With any luck, it will be defeated before it ever becomes law.

I used to be opposed to limiting SNAP until I had a conversation with my postal carrier. They still walk mail door to door here so you interact a good bit. They deliver the mail so tend to witness the abuse first hand. New Mercedes purchased by recipients or rich families cheating benefits so the 20 something living in the basement gets benefits. I once worked with a guy who refused raises because he knew exactly what $ amount would cause his family to lose a benefit in some way. He requested a lump sum instead and when the company… Read more »

I’ve been on both sides of the table. As a child, when my parents divorced my dad wouldn’t pay child support and Food Stamps meant the difference between me & my sister eating supper or going hungry. As an adult I worked for years as a caseworker, administering money grant programs like AFDC and Food Stamps. My clients mostly were barely scraping by and the causes they were on assistance were the same as they’d been since the 1960s; the death, disability, unemployment or desertion of the family’s main wage-earner. Was there fraud? Yes, I found precisely two, out of… Read more »

ive refused snap benefits because i do not need the garbage sold in the grocery stores when i can raise good nutritious food. i collect and redeem plastic bottles that have a deposit on them and a family that gets snap gives me their empty bottles. not only do they drink mountain dew like it is being taken off the market next week, but i have to pour out the liquid inside the bottles, they waste at least 1 gallon of it every week. i personally know of a store in iowa that the owner would sell hard liquor ,… Read more »

It doesn’t have to hurt the disabled, elderly or the young. It’s these people who have full grown adult children living with them paying their bills yet these people get SNAP and buy steaks and lobster with it. They also trade the cards for drugs, cigarettes and alcohol, and having the EBT card makes this easier! Stores don’t check ID on everyone that uses these EBT cards so they don’t know if the person using the card is the correct recipient of the program funds! There should be a time limit for these programs, unless it’s the elderly or disabled,… Read more »

Keto Rash
There’s no actual scientific reasoning/clarification in the back of why a few human beings start to itch when they begin keto.