Yes, the Government Really Does Stash Billions of Pounds of Cheese in Missouri Caves

The USDA has kept cheese and other dairy products in cold-storage caves for decades. But their purpose has shifted over the years. 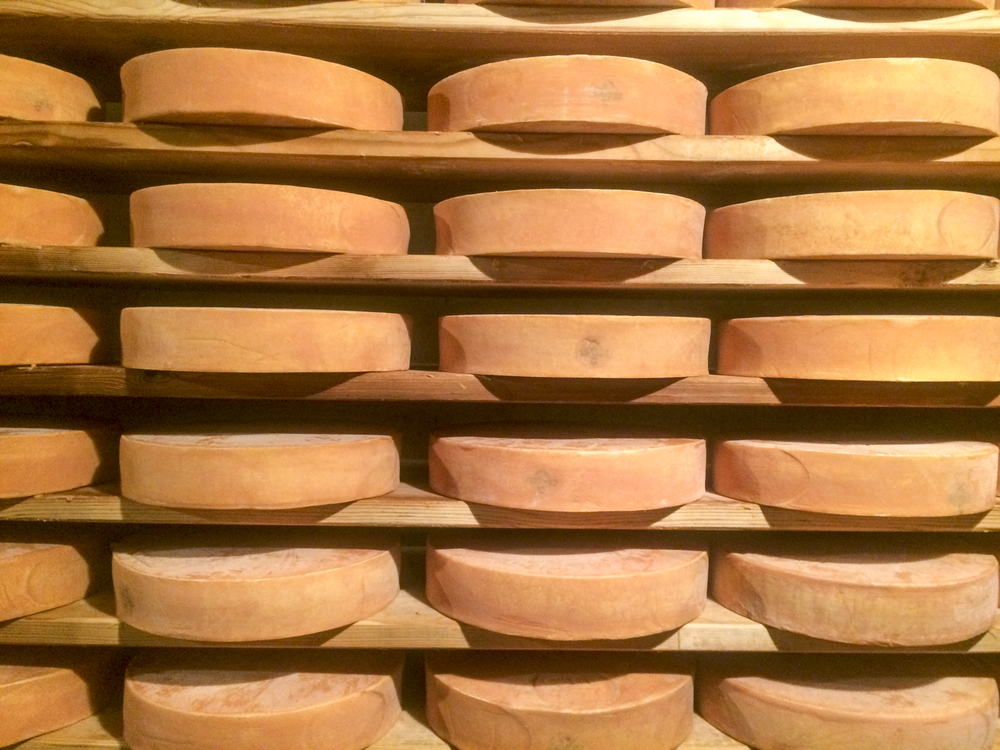 Why is the government in the habit of hoarding cheese?
Photography by dibettadifino, Shutterstock.
Share
Tweet
Pin
Email

If you had millions of pounds of cheese—along with butter and dry-milk powders—where would you keep it? If you’re the United States Department of Agriculture (USDA), the answer is obvious: in a series of caves outside Springfield, Missouri.

It’s not as wacky as it sounds. The USDA has a large presence in Kansas City, Missouri, and when it found itself with millions of pounds of surplus dairy and needed a safe, climate-controlled place to put it all, it started to search locally. A set of caves along Interstate 435 offered a convenient cold-storage option.

But still, caves aside, why is the government in the decades-long habit of hoarding cheese in the first place?

The answer to that question has two parts: why it started; and why it’s still doing it.

It all starts with milk. The price of milk has always been volatile, jumping up and down based on limited supply and fluctuating demand. It also doesn’t help that milk production naturally rises in the spring calving season, but demand for milk is generally at its highest in the fall, when the school year starts again. To help, the government looked for ways to step in and calm the market. But because milk has a pretty short shelf life, it couldn’t do much with the actual liquid product.

So, the government turned to cheese.

In 1949, the USDA introduced the Dairy Product Price Support Program, later known as the Milk Price Support Program. When the price of dairy products sunk too low for farmers, the USDA would offer to buy up the excess at a stable rate. It bought millions of pounds of cheese, butter and dry milk from producers who would otherwise have lost a lot of money if they only relied on their regular retailers. The result? The dairy market would stabilize, producers would have steady income and prices for the products would eventually rise. Then, once the prices of dairy products hit 125 percent of the support price, the USDA would start selling off its stash in bulk.

That wasn’t so great either. The USDA buying up cheese prevented the prices from dipping too low—but the department also put a ceiling on how high the prices could climb. “This is especially true during the 1980s. You ended up with prices not able to move out of either end of the spectrum,” explains Scott Brown, an agricultural economist at the University of Missouri. “It did create very stable prices. But most folks weren’t very happy with that kind of operation, and it was costly [for the government].”

RELATED: Why Seasonality Matters for Cheese

Now, the USDA had to pivot. It started reducing the support prices and buying less stock, but that didn’t have a huge impact. So it moved to the next phase: getting rid of the automatic sell triggers. Instead of selling out its stores of dairy products when market prices climbed to 125 percent of the support price, it would leave it up to the secretary of agriculture to decide when to release the product. “That became a political football, how to handle the release of stocks,” Brown says. Not only that, but if the secretary of agriculture decided to hold on to stores past the previous 125-percent cutoff, stocks would keep accumulating. The cheese and butter and dry milk would pile up, and then the USDA would have to scramble to deal with them before they spoiled.

It was a tricky balance to strike. Eventually, the USDA decided it had had enough, ending the price support program in 2014. But it kept hoarding cheese and still does so to this day. Only now, it’s for use in food assistance programs. In the latest cold storage report, the USDA shows a little less than 1.5 billion pounds of cheese in storage, along with 355 million pounds of butter, 211 million pounds of pecans and just less than a billion pounds of french fries (it stores a lot of stuff!).

Although the current iteration of cold storage isn’t intended to stabilize market prices, it can still have that effect. First, there’s the theory of displacement. If the USDA purchases cheese to give out to Americans in need via food banks and food assistance programs, does that replace a purchase of cheese someone might have otherwise made?

Brown argues that it’s not a one-to-one equivalence but that there might be a spectrum of displacement. For instance, if a person with a lower income were to receive a pound of cheese for free, that might not have any impact on their planned grocery purchase, as they might not have been able to afford cheese at all without help. “Maybe the next person comes along, and they could have afforded half a pound. But they didn’t buy that half a pound because the government gave them a whole pound,” Brown explains. The commercial displacement with government cheese is somewhere between zero and one. “The less it displaces, the more it helps market prices. Dairy farmers do get help from today’s government purchases; it’s just hard to quantify that help.”

And as with calming market prices, government cheese can also shoot prices up. During the worst of the COVID-19 pandemic, beginning in May 2020 and running over the next year, the USDA created food boxes to distribute to families struggling in a tight economy. A portion of those boxes included—you guessed it—cheese and other dairy products. As a result, the government “spent billions of dollars,” says Brown. “It was a significant enough purchase that it drove cheese prices higher.” The wholesale prices of cheese jumped dramatically, which Brown calls an “unintended consequence” of the government’s food assistance efforts.

So, yes, the government really does hoard billions of wheels of cheese in caves underneath Missouri. And, at least for now, the goal is to help people—both farmers and low-income consumers—with that stash.

Should the government ever need to get rid of its stores quickly, perhaps stocking up on some sourdough bread and nice butter would help. Grilled cheese party in Missouri, anyone?

So Biden’s tapping the strategic oil reserve and doing nothing with the strategic CHEESE reserve? I think it’s time for the rest of the country to get introduced to (deep-fried) cheese curds! (and beer-cheese soup!)

As a Louisiana foodie, all I know about the topic is that if anyone got t heir hands on government cheese, it was a celebration, because it was so tasty.!!

I remember the British egg marketing board years ago when the same thing happened with eggs. All eggs produced by private farms etc, had to be sold to the government who stockpiled them. They ink stamped a lion on each egg they sold. Unscrupulous people bleached the eggs to remove the lion and sold them on the black market. The gov. finally dumped millions of eggs in the landfill. Check it out and report on it Dr Mercola.

Why would the U.S. government starve the people that they’re supposed to be protecting and helping. With the COVID shit still going on and gas going through the roof people can’t make ends meat. Why can’t they stop trying to sell the stuff for a profit… dam money hungry bastard’s…. Can’t they give it to needy families and homeless people. Have a heart and stop ripping The hearts outta lower income families and homeless… Honestly the government needs to get get a solvent to get the glue off there wallet and crow bar to Open it… Help your people and… Read more »