Driving through rural northwest Ohio, the first thing you notice is how flat it is — flat as a griddle cake, with narrow roads slicing through endless fields of soybeans and corn. 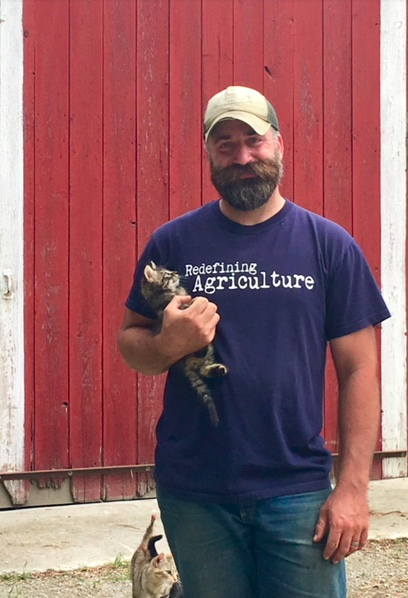 Occasional cattails line a ditch, and red-winged blackbirds roost nearby.

A bucolic farm appears that can be reached by a two-lane gravel driveway. To the left is a peaceful pond, and straight ahead are a couple of red barns and a big white farmhouse. Two black-spotted dogs wait, tails awagging, while kittens tumble in the dust.

This pastoral setting – complete with a lazy herd of cattle, happy hogs exploring a sloppy mud puddle and a large flock of light-brown laying hens – is Weber Ranch, home of Tony Weber and his wife, Michelle, both first-generation farmers. Their farm sells grass-fed beef and raises farrow-to-finish hogs, along with eggs, chickens and Thanksgiving turkeys. Everything is free range, and all the animals are moved around constantly to graze in different areas to keep the pasture healthy.

“We are stewards of the land,” says Weber, “and there are no concessions on how our animals are raised. We believe in fresh air, green grass and sunshine.”

Life wasn’t always this tranquil for Weber. A veteran of the United States Marines Corps, he enlisted at age 17, leaving his high school sweetheart, Michelle, back in Ohio. As a U.S. Marine, he served with the elite and demanding White House Military Office, providing security for the U.S. president during his travels at home and abroad. “Anywhere the president went, we went,” he says. 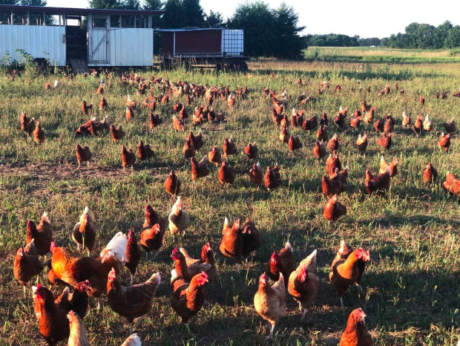 Following his military service, he earned a degree in forestry and worked out west for a few years before he and Michelle settled back in Ohio. He is one of a growing number of military veterans who are transitioning to careers in agriculture when they return to civilian life.

And that’s a good match, says Evan Eagan, a former U.S. Marine who served in Iraq and is now communications manager at Farmer Veteran Coalition, the first and largest nonprofit organization to assist military veterans who are transitioning to careers in agriculture. “They come back and wonder what their next steps will be,” he explains, “and a lot of them are returning to the farm.”

Eagan sees similarities between farming and the military. “They’re both professions that earn a lot of respect,” he says. “Both instill discipline and character, which enables veterans to be well suited to the hard work, challenges and problem-solving that are also part of the job in agriculture.”

Veteran Sarah Robbins agrees. “There are a lot of transferable skills,” says the Michigan beekeeper. “In the military, you’re taught to be a problem-solver, to have determination and to have a certain stick-to-itiveness. Those skills are valuable in farming, too.”

Robbins was on active duty in the U.S. Army until early 2015, most recently serving as a judge advocate general (JAG) officer. She still serves in the Army Reserve and works as an attorney in state government.

Robbins and her husband, Christopher, own Nature’s Harvest Honey & Produce, where their hives house hundreds of thousands of bees. The couple produces honey, honeycomb, lotions and lip balms, as well as vegetables and produce. “We don’t use artificial anything,” she says.

Farmer Veteran Coalition, based in Davis, California, has more than 12,000 members from all 50 U.S. states, Guam and Puerto Rico. About half of the members are active in agriculture, ranging from huge U.S. Midwest farms to urban rooftop food producers and everything in between.

The organization offers a wide range of support, including a veterans’ outreach team to help veterans explore opportunities and connect them with resources, a small-grant fellowship program, business planning assistance, a national network of veteran mentors and information on education and resources. “We’re always ready to assist veterans if they have questions or need advice,” says Eagan.

It also oversees Homegrown By Heroes, an agricultural label that distinguishes products that are made and sold by U.S. military veterans. Currently about 1,500 veterans, including Weber and Robbins, are certified with the Homegrown by Heroes label.

The U.S. Department of Agriculture (USDA) offers support to veterans, too, and focuses on “employment, education and entrepreneurship.” With agencies throughout the country, the USDA offers information about financial, educational, funding and training resources and can connect veterans with farmers and agriculture extensions in their local areas.

Eagan believes now is a great time for returning veterans to dig into careers in agriculture. “It’s an exciting time for farming,” he says. “It’s a profession that’s getting on the radar of more and more younger people in the United States. They really want to know where their food comes from.”

The Webers say the same thing. The couple strategically analyzed demographics to find out what people are buying and why. “Most people are now a third generation away from farming,” says Weber, “but the key is, they want to know the story behind their food. At our ranch, you can always come out and visit. We have an open-door policy.”

Eagan also sees a certain serenity to a career in agriculture. “A lot of veterans report a healing aspect to farming,” he says. “It brings purpose to their lives.”

Weber agrees. “There’s a very noble aspect in the work we do, just like in the military,” he says. “Our model of farming is very near and dear to me. When I see a litter of pigs from day one and treat them the way I think they should be treated as they grow, it gives me a real sense of accomplishment. And one of the biggest perks is being able to play with the little piglets.”

Im an agriculture extension officer so interest your published.