Farming a Future for Veterans

The military taught Evan Premer not to waste time fixing a problem. So he's been quick to start up his own high-tech farm operation in Denver. 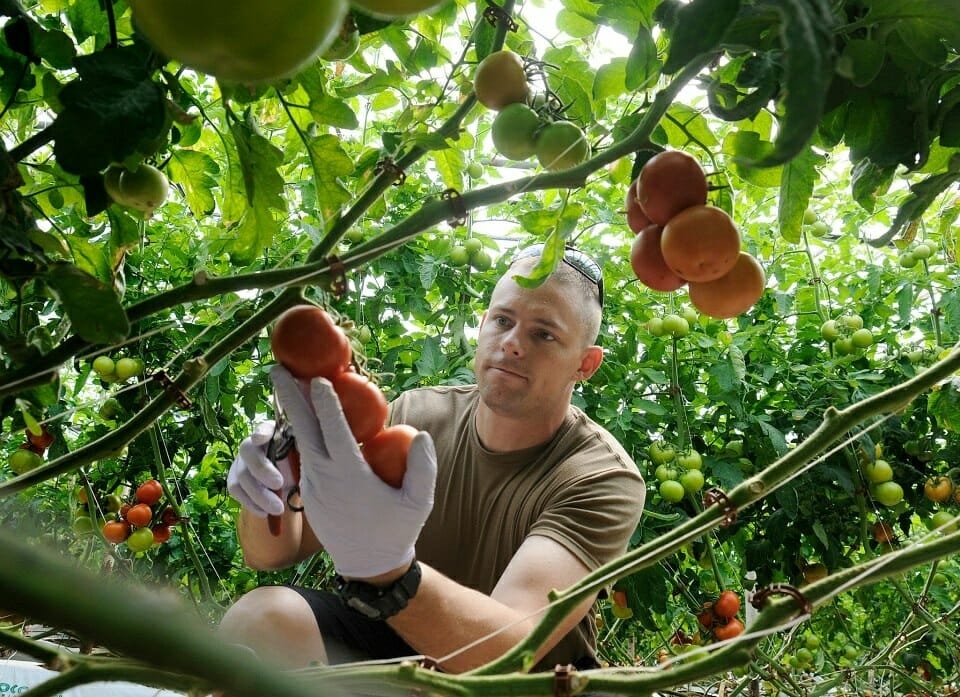 If Steve Jobs had added a gardening section to the Apple Store, it might look something like Premer’s farm. Bunches of watercress, arugula, romaine and other greens spill from the sides of 24 sleek, white towers. Streams of nutrient-laced water trickle over the exposed roots inside each tower, giving the plants all they need to grow. There are no raised beds or piles of compost at Aero Farm Co. There isn’t a single grain of soil.

Premer uses aeroponic technology to grow baby lettuce and microgreens for restaurants in the Denver area. He is also working on setting up a community-supported agriculture program (CSA) for the neighborhood around the farm. “It’ll be the first year-round CSA in the state,” he says proudly, explaining that he could control the greenhouse environment throughout the winter.

Premer grew up in Denver, far from an agricultural lifestyle, but after losing a job maintaining rental properties, he got a call from Buck Adams, the founder of an organization called Veterans to Farmers (V2F). Adams offered Premer the chance to join an intensive eight-month program that trained former soldiers in the methods and business of controlled-environment agriculture (CEA), the broad term for technology that creates a growing environment.

After a year of toying with the possibility, looking for odd jobs, and trying for an associate’s degree in photography (all of the photos in this story are his), Premer jumped on board.

For the most part, Premer keeps mum about his military service. “I gunned out of the side of a Blackhawk helicopter,” he says. After a long pause, he added, “That’s all I am willing to say.”

He is much keener to discuss the future, which includes plans to develop a new veteran training facility with Adams in downtown Denver. Premer’s wife, Heather, plans to join him as the Director of Administration as soon as Aero Farm shows a profit, meaning his daughter Alana will visit the greenhouse more often.

“I am so excited to show other veteran families what’s possible,” Premer say. The new breeze ruffled the towers. “This is just the tip of the iceberg.”

From Protector to Provider

Soldiers returning from Iraq and Afghanistan face a daunting transition to civilian life. According to Iraq and Afghanistan Veterans of America, veteran unemployment is three points higher than the national average. Those who can’t work face a nine-month wait for disability benefits. The psychological challenges of the battlefield are even more widespread. Over 50 percent of veterans suffer from Post-Traumatic Stress Disorder (PTSD) upon their return, which can include nightmares, anxiety, flashbacks and depression. About every 80 minutes, a former warrior takes his or her own life. As Buck Adams puts it, these psychological effects can make veterans “a little twitchy” when they first return home to the United States.

Buck believes that part of this twitchiness stems from a feeling that, as a veteran, one lacks a sense of purpose in the civilian workforce. For years, veterans have awoken every morning with a mission and a team. Once home, they might lack both. “Listen, I am not a therapist,” says Adams, “but I’ve seen farming work. My guys fall in love with the growing process, taking it to market, and being thanked for what they’ve done.”

After leaving the service, Adams walked a serpentine path to his current venture with V2F. He tried acting and modeling in California. He twice went under the knife to beat back a brain tumor. He decided to move to Colorado for a fresh start. Initial plans to build a geothermal power plant fizzled out after he discovered the idea was a few hundred million dollars outside of his price range, but as soon as he began talking to people about sustainability, he realized that there wasn’t enough conversation about food and farming.

Adams’ parents farmed chickens on contract for Tyson Farms in Arkansas. He wondered if he could apply that business model to the local food movement. In 2009, Buck started Circle Fresh Farms with John Nichols, a friend from Pueblo who already owned a 12,000 sq. ft. greenhouse. They expanded under the Tyson model, establishing a central production and marketing company to assist a number of independently owned farms. While searching for ideal candidates to run those farms, Buck thought of veterans.

“Veterans are used to environments that require a high level of detail,” he explained. “They notice the pitch of fan being just a little bit off, or a few plants looking different before they find a nozzle being turned around. And they are go-getters. They see what needs to be done and do it.”

So far, V2F has successfully trained and graduated a dozen veterans. But Adams is far from satisfied. He wants the new training facility in downtown Denver to not only supply the neighborhood with a steady stream of fresh veggies, but to also become the national epicenter of the V2F movement. Veterans can visit the facility, learn the business, and bring it back to their home communities.

Adams also hopes that the work brings a measure of peace to those who need it most. “You can forget about your own troubles when you have a thousand plants with troubles of their own,” he says.

Hydroponics and aeroponics are far from new. But only recently have farmers like Premer begun to turn the tables on these technologies – literally – by using vertical towers to grow fruits and vegetables.

Premer’s farm uses a set of towers built and engineered by a company called Future Grow. “At first I thought I could save some money by making these things out of PVC piping,” says Premer, “but then I learned how dummy-proof [Future Grow’s towers] are.”

The towers are aeroponic as opposed to hydroponic, meaning they use mist instead of liquid water to deliver nutrients and hydration to the plant roots. Premer carefully monitors the reservoir at the bottom of each tower to make sure every plant receives the proper amount of nitrates and minerals. Because the towers recirculate their water supplies, he only needs to flush and replenish the reservoirs every two to four weeks.

Due to the constant recycling of water, the towers only use one-tenth of the water it would take to grow the same yield on a soil-based farm. Where a traditional farmer would use about 100 gallons of water to grow a single head of lettuce, Premer can use 10. Additionally, Premer’s farm does not produce any agricultural runoff. As a result, vertical aeroponics have caught on in locations where water comes at a high premium – places like Israel, Spain and drought-stricken Colorado.

The other obvious argument for vertical farming is that it consumes far less space than traditional agriculture. Adams estimates that his 10,000 sq. ft. training facility will have the capacity to produce the same yield as 2.2 acres of traditionally farmed land. That’s a two football field-sized crop grown in the same amount of space as a four single-family homes. This advantage has designers and architects imagining farms that grow atop apartment high rises or in the middle of housing developments.

Critics of controlled-environment agriculture claim that it will never reach the scale of traditional methods, which may be true. Still, many fail to recognize the amount of produce – in the United States and abroad – that already comes from greenhouses. The USDA claims that the United States imports nearly half of the Mexican tomato crop. Almost all of Mexico’s tomatoes are grown in climate-controlled greenhouses with hydroponics.

As climate scientists continue to predict that drought is “the new normal” in certain regions, farmers must begin taking CEA seriously as a substantial contributor to our future food supply. Already the United States lags behind every other industrialized nation in CEA, according to a study by the University of Arizona’s Controlled Environment Agriculture Center. China leads the pack, committing over 2,700,000 hectares of land to greenhouse food production.

“China’s building greenhouses like it’s going out of style,” says Adams, “but now labor in Mexico is cheaper than in China and it’s closer. Didn’t we learn our lesson [about] outsourcing our manufacturing?”

Until greenhouses catch on in the United States, Premer has plenty of sources for aeroponic supplies – and it’s all thanks to Colorado’s near-legal marijuana industry. On our way to the farm, Evan and I stopped at a hydroponic supply store. The manager sold him on a new solid pH leveler, which cost half the price of the liquid leveler Evan had been using.

“Those guys don’t grow food,” Premer says, “but they sure know what they are talking about.”

The Fruits of Their Labor

Daniel Asher buys most of Premers produce for his two restaurants in Denver – Root Down and Linger, both of which specialize in serving local food. He knew he wanted greens from Aero Farm from the moment he tasted them. “The exceptional flavor profiles are just amazing,” Asher says. “We would have been doing a disservice to our customers not to serve it.”

Asher likes it when his customers can see where their food comes from, so he asked Premer to install a vertical tower in a dining area of the restaurant. This living sculpture makes a clear point to customers: here is your food, and here is where it comes from.

For Premer and his family, the success of Aero Farm has served a similar purpose. He can see the connection between his hard work and the customers who enjoy it. Over the next few years, millions of veterans will return to the United States. Training them to find purpose and community in farming may be the most sensible gift we can offer soldiers searching for a way home.