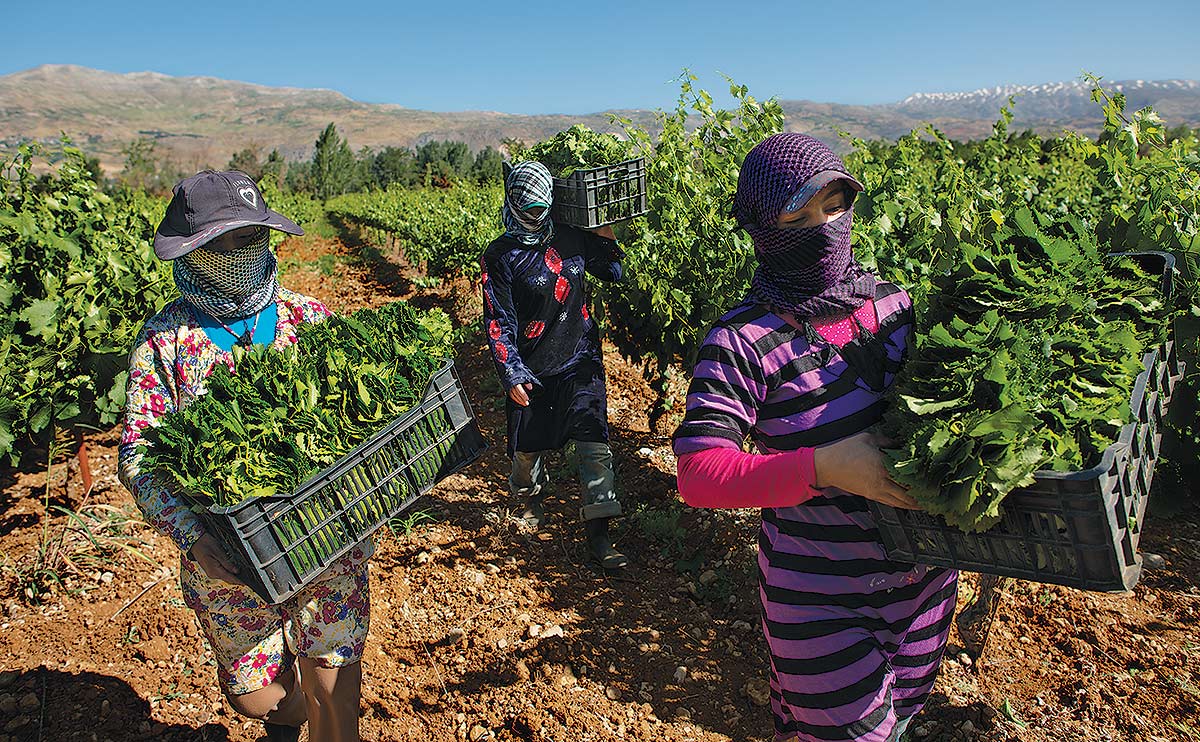 Abu Ali Al-Hallak, a Lebanese farmer for over four decades, watches five Syrian farmhands place eggplant seedlings in the rich, cocoa-colored earth of his farm. He stands in the shade of a dilapidated old sawmill that hasn’t served its original purpose since 1975, when it was used as a Syrian army outpost at the start of the 15-year Lebanese civil war.

Conflict has been a constant for Hallak. “The Syrians were here,” the gray-haired mustachioed farmer says, waving his hand across the flat fields around him, “and the Israelis were up there.”

Now, as Syrian refugees and their families take up residence on the property, a new yet familiar intersection between war and agriculture is once again emerging.

Hallak’s 19-acre farm is nestled in the fertile western part of the Bekaa Valley, an inland plateau some 3,200 feet above sea level. He has been planting cauliflower, eggplants, tomatoes, potatoes, garlic and other staples for 46 years. He’s had a harvest every year, he says proudly, except three years in the ’80s when Israeli military occupied the area. “This was a front line between the Israelis and Syrians,” Hallak says. “But after the Israelis left, we paid the Syrian soldiers small bribes, you know, and used to plant in front of their tanks.”

The tanks are now gone, but trouble is once again brewing near the farm – and once again it’s tied to events in a neighboring country. The deepening Syrian civil war is creeping into Lebanon in several ways. The Syrian military has shelled Syrian rebels and their local sympathizers in areas like the Bekaa. Lebanese men, munitions and money have also moved in the other direction to factions inside Syria, and then, there is the flood of refugees.

As of this summer, some 530,000 Syrians are now registered as refugees, although the United Nations now puts the number at 2 million. It’s a massive influx into a country of only 4 million people.

And it shows, even on Hallak’s farm. Typically, Syrians work as seasonal farmhands in the Bekaa, returning home after the harvests. These days, many like Abu Hady, a 20-year veteran of the farm, are staying on and bringing their families. It’s now common in farms across the area to see many more women doing chores like laundry, as well as gaggles of children playing in the fields around the temporary tents used by seasonal workers.

Now, few refugees here expect to go home anytime soon. Some of the tents, like worker Em Thair’s, have taken on a semblance of permanence. Four neat rows of flower seedlings are planted in a crudely fenced-off area in front of the tent she shares with her dozen family members. “I used to have a garden at home and I miss it,” she says, staring down at the plants as she cradles her 6-month-old grandson. “I guess I’m trying to make up for what I lost, to remember.” She had never been to Lebanon before she fled here last winter.

Abu Hady’s home was destroyed in a government air raid, he says, playing a video on his Nokia phone that shows a street full of rubble. “I think I’ll be here for a long time.”

A short drive away, in a garlic plantation in another part of the farm, some 50 or so workers – mainly women and children – stand in a row waiting for a tractor to pass alongside the garlic to soften and upturn the earth. “They’re all first years,” Abu Hady, says, meaning it is their first time working there. Many of the new farm workers are not pleased about this situation, either. “I wanted to be a teacher, now I pick garlic,” a 14-year-old girl named Amal says bitterly, shaking the dirt off several heads of garlic before placing them on a pile, where they will dry for 15 days before being taken to market. “I wish I could have brought my books with me.”

The new workers are making some of the older workers nervous. Old hands like Abu Hady fear that their day rates will eventually be undercut. Men’s rates are the equivalent of $10 per shift; a female’s wages are a little over half of that. Children can make $4 a shift, but many farms refuse to employ them.

Apart from the refugees, another impact of the Syrian war is that the land route through Syria to Jordan and then on to the Persian Gulf has become too dangerous for many. Hallak says he exports about half of his annual harvest to the Gulf, but for the past two years, it hasn’t made financial sense. Before the Syrian uprising kicked off in March 2011, it cost him between $1,000 and $1,500 to ferry a truckload of produce from Lebanon through Syria. “Now, it’s three times that,” Hallak says, “and that’s if you can find a driver who’ll do it.”

Still, he remains optimistic. “We’ve passed through worse,” he says, poking his walking stick into the earth. “This is Lebanon; when did we have it easy?”