Check Out This Big Steer

We’d say “holy cow” if it wasn’t inaccurate due to gender misidentification. 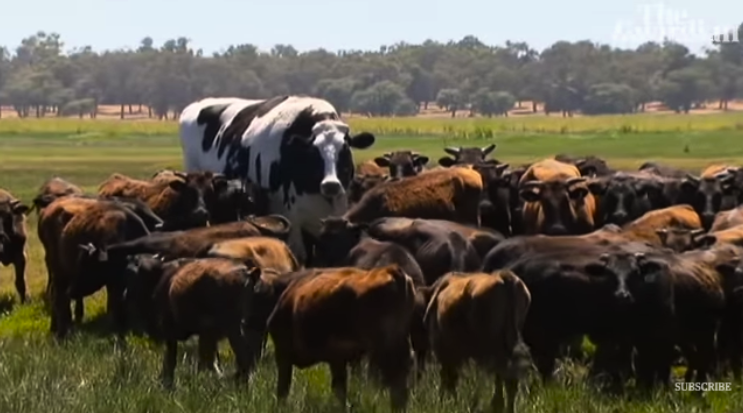 People are very excited about this Australian big steer, even though some sources misidentify the animal as a cow (which refers specifically to a female animal) rather than accurately as a steer (a neutered male). The steer is big, much bigger than other cattle. He is named Knickers and has been covered in many news publications. Everyone loves him.

Knickers is photographed with Wagyu cattle, which average a much smaller size than Knickers’s breed, Holstein-Friesian. Knickers is measured at six feet, four inches to the withers, or shoulder, and weighs somewhere in the range of 1.5 tons. This is very big, about the size of world-record holders like Danniel (from California) and Blossom (from Illinois), both also of the Holstein breed. Holsteins are the classic black-and-white patterned breed, originally from the Netherlands, and when fully grown are very big indeed. They are not the largest cattle breed in the world—that would be, probably, the Chianina—but are quite big.

Knickers is seven years old, which explains his size; he is not really abnormally big, but is abnormally old. Holsteins can live to around 20, but hardly ever do. Their large size makes them difficult to slaughter, and in ranching and dairy settings they typically only live to around four years old. This is why Knickers is so big; for whatever reason, he wasn’t slaughtered when it would have made sense, and now it doesn’t really make sense, and his owner, Geoff Pearson, seems to like having him around anyway.

Pearson told the Guardian that Knickers “just hangs around,” showing other cattle where to eat. Sounds fun! Big steer.

I want information about farm animals