Name That Orange! The Modern Farmer Guide to Orange Varieties

Valencia! Clementines! Heirlooms? There are so many orange varieties to try. Here's a guide to some of the more common options. 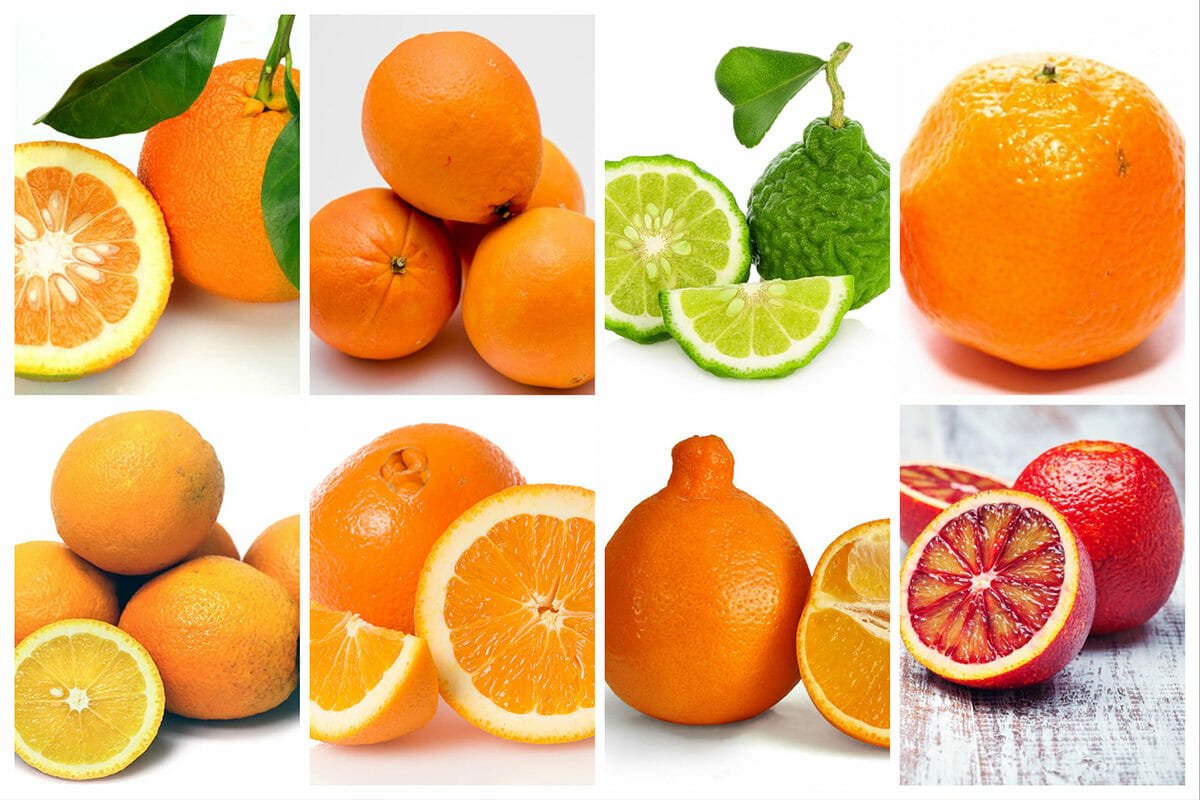 Oranges are one of the best parts of winter. Can you tell the difference between these varieties?
Share
Tweet
Pin
Email
560 Shares

For much of the U.S., the phrase “winter crops” brings to mind only a few options: daikon radishes, Jerusalem artichokes, turnips, maybe some of the hardier brassicas, like cabbage or broccoli.

But elsewhere, especially in South Florida and California, winter is a joyful time, because citrus is back in season. This year has been a difficult one for citrus growers. Hurricane Irma, in Florida, is estimated to have reduced the citrus crop by about 21 percent, which would make this the worst season for Florida citrus in decades. In California, a slightly light crop is expected as well, which means citrus may be priced a bit higher than usual this year. But, look, so few things bring us joy in the middle of winter; we’ll ready to pay a bit more for a bite of sunshine.

With all that noted, you might be confused by the dozens of different oranges varieties – not citrus as a whole, just oranges – that pop up this time of year. And while the orange may have a reputation as one of the U.S.’s most common and basic fruits (right up there with the apple and banana), it’s actually very special! The orange as we know it is a hybrid of two other citrus trees: the pomelo (which is like a slightly less bitter grapefruit) and the mandarin (which is flat, small, sweet, and orange in color) – it’s not believed to have ever existed in the wild.

(Important! Despite being commonly called the “mandarin orange,” the mandarin is not an orange. The mandarin is one of the two parents of the orange, but to be classified as an orange, a citrus fruit must include a mandarin and a pomelo as parents. That disqualifies tangerines (which are a type of mandarin, probably) and satsumas.)

Oranges were likely first cultivated in southern China (references to the fruit can be found in region’s literature as far back as 314 BC). They’ve since been hybridized, re-hybridized, and altered so much that there are hundreds of orange varieties throughout the world. This is a guide simply to the most common orange varieties, but trust us, that’s complicated enough. 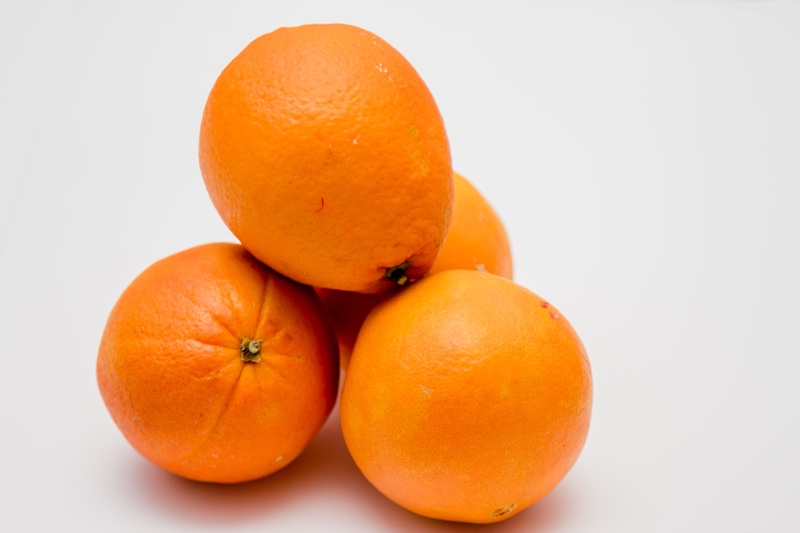 Oddly enough, the valencia orange is not from the city in Spain, but was created in southern California sometime in the mid-19th century. Though it is among the most common oranges in the U.S., it’s also the only major variety to be harvested in the summer; the season runs from March to July. Very sweet, with low acidity and a bright orange color, the valencia is the most common juicing orange, though it’s also eaten. 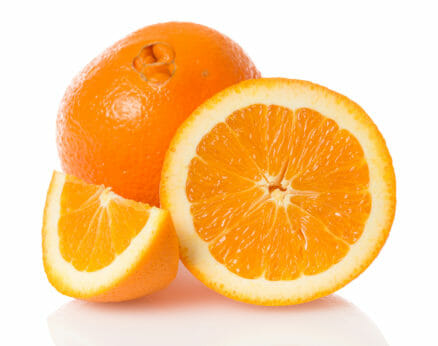 It’s not totally clear where the navel orange is from – some say Brazil, some say Portugal – but it’s the most popular orange for eating in the U.S. The navel orange gets its name from the fact that it tries to grow a second orange at its base, which produces an effect somewhat like a human bellybutton. They are often seedless and thus sterile; new navel trees come from cuttings rather than plantings. In flavor, a navel is a bit more bitter than a valencia, but also hardier, with a thicker peel. 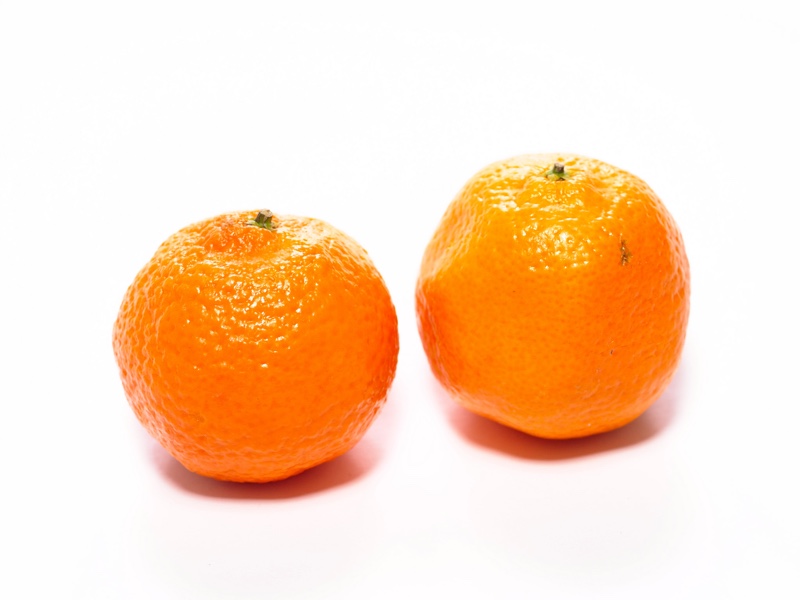 Aha! The adorable little nephew of the orange family. The clementine, named after a French missionary who supposedly discovered the variety in Algeria, is actually a hybrid of a sweet orange (something like a valencia or navel, though we don’t know exactly which one) and the mandarin. Clementines are very tiny, very sweet, seedless, and have a fantastically loose skin and minimal pith, making them easy to peel (no tools required, besides maybe a sharp fingernail to get started), and ideal for eating. 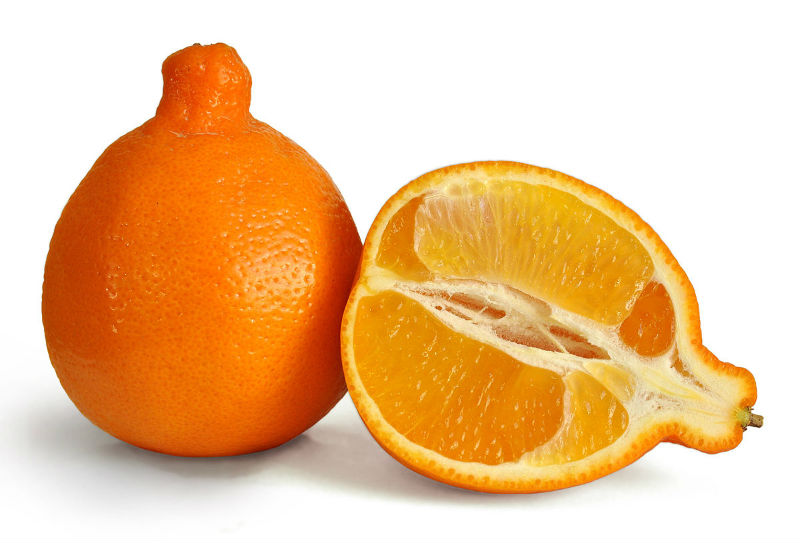 This is a controversial one, but hear me out. The tangelo is, as its name suggests, a hybrid of the tangerine and the pomelo. And the tangerine is (probably) a type of mandarin. (Or a fruit similar to a mandarin. Nobody really knows, but it’s in the mandarin orbit.) The definition of an “orange” is a hybrid of mandarin and pomelo, so, well, okay, this counts. (And to take it even further, the minneola tangelo is a cross between a tangerine and a grapefruit, but since the grapefruit is a descendent of the pomelo, it still counts.)

The tangelo is most easily identified by its reddish skin and the protruding nipple-like thing on the stem end. It’s extremely juicy and sweet, with a very low amount of acid, which makes it an excellent juicing fruit, but the skin is very tight and hard to peel, which makes it trickier to eat raw. 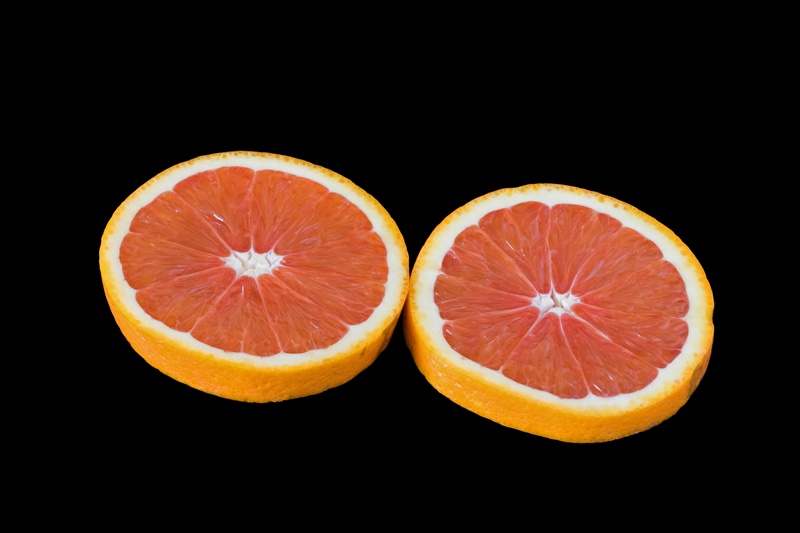 The prettiest of all oranges is the cara cara. It’s a type of navel orange – it’s sometimes labeled “pink navel” or “red navel” – and was discovered in Venezuela in 1976. It is an all-time great orange, extremely sweet but with a complex sort of berry flavor behind it. And best of all is the color: a luscious pink. 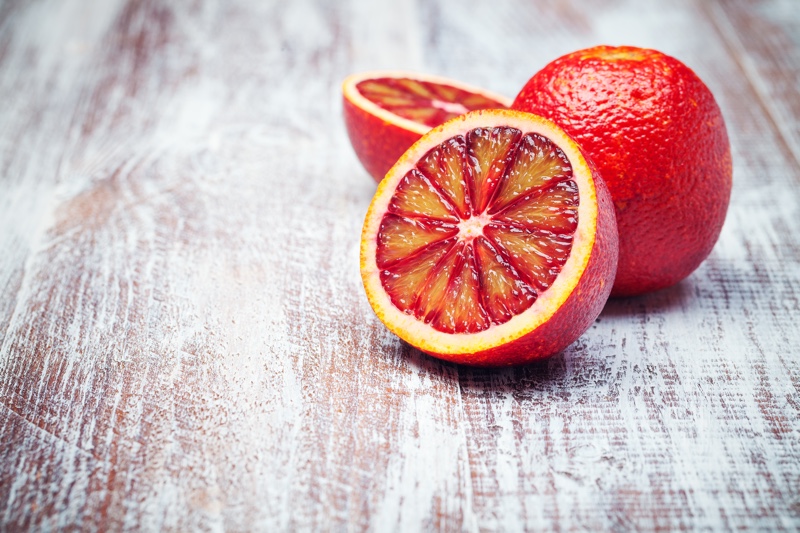 The blood orange is probably a natural mutation of the regular orange; it has a deep, sinister red flesh which indicates a high level of antioxidants known as anthocyanins. (Most oranges do not have these.) There are a few different types of blood oranges, the most common of which are the moro and sanguinello. Sometimes you’ll be able to see dark blotches on the skin that indicate the deep red within, sometimes not. Blood oranges are not as sweet as the cara cara, but they do have an appealing sort of raspberry flavor to them. Also, their juice is very pretty. 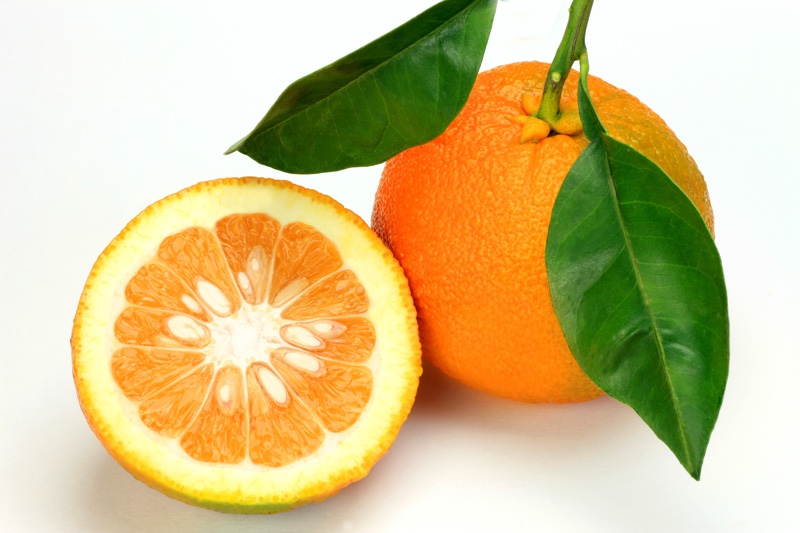 An entirely different lineage, but also derived from a hybrid of the pomelo and the mandarin, the bitter orange is sometimes known as a Seville orange or sour orange. Because it’s completely lacking in sweetness, it’s not generally eaten or juiced for standalone drinking. Bitter orange’s peel is extraordinarily fragrant and is often used as a flavoring or spice in its own right; in the UK, it’s common to see it in marmalade. In Europe, this orange is often used to flavor beers, like the Belgian witbier, or as a dessert spice along with clove and cinnamon. The juice is used as a flavoring or marinating ingredient throughout Latin America, especially with pork, as in the Mexican cochinita pibil. 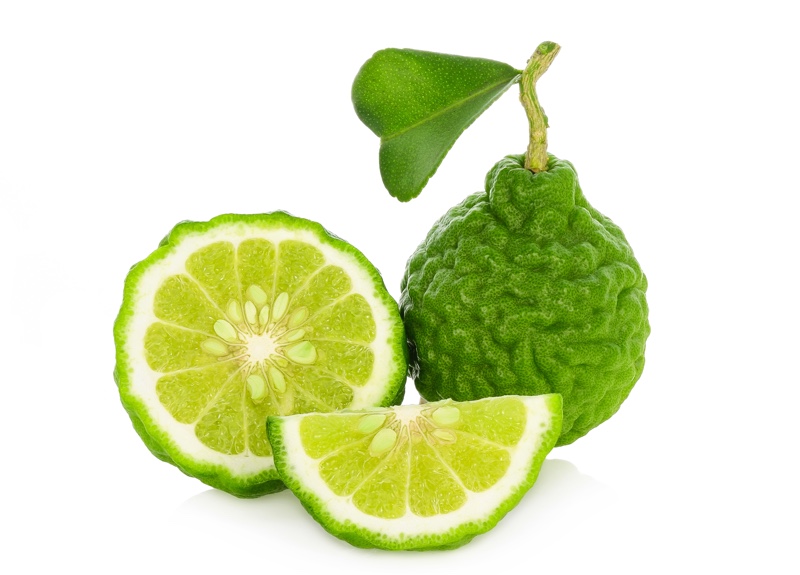 What? This is an orange? Sure is. The bergamot orange, an extract of which is used in Earl Grey tea, is actually a hybrid of the lemon and the bitter orange. It’s usually lime-green or yellowish in color, sometimes smooth and sometimes sort of lumpy, and as with the bitter orange, it’s chock full of seeds. The juice is very, very sour. 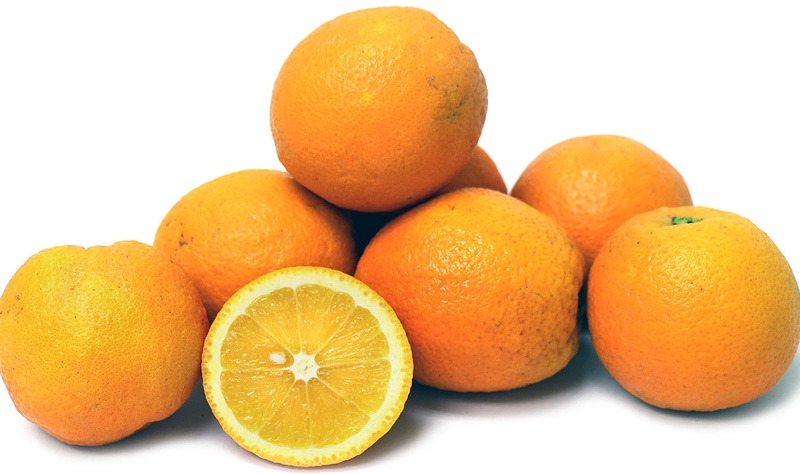 One of the more common examples of what’s called an “acidless orange,” the lima is grown extensively in Brazil. It does not, of course, completely lack acid, but the levels are very low, making this one of the sweeter oranges out there. The flesh is fairly light in color, and it has a thick peel along with some seeds. 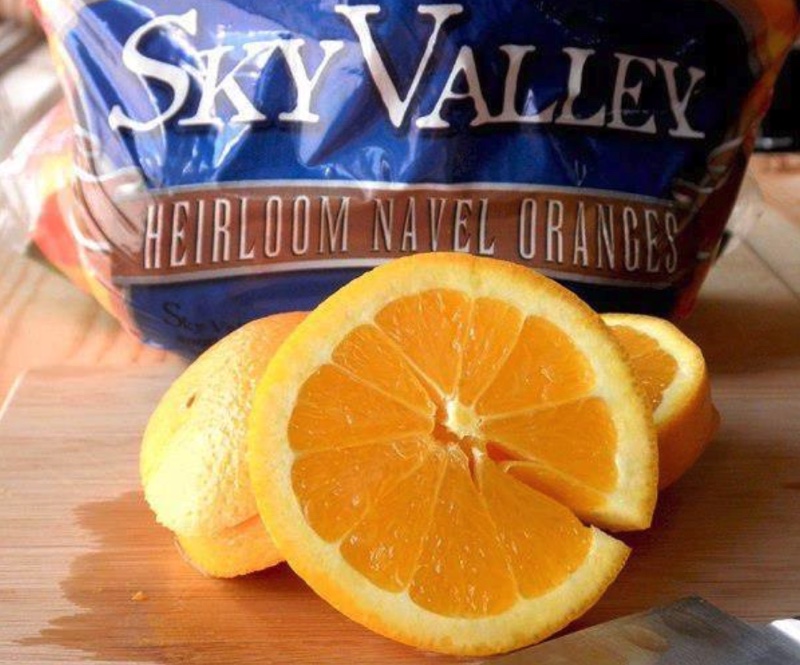 So, this is a weird one. When you hear “heirloom navel,” you’d expect an old variety of the navel orange, perhaps long forgotten. That isn’t really the case; a New York Times article showed that, mostly, heirloom navels are Washington navels, the same variety as other ordinary navels. Because there isn’t really a rule about what is qualifies an orange as “heirloom,” the label isn’t necessarily reliable. But some growers take the name seriously, only using rootstock from sour orange trees, the same way they were grown in the early years of California citrus. This produces a lower yield than using a sweet orange rootstock, but the flavor can be superior. Heirloom navels, at their best, are superbly flavorful; not really different in profile from a regular navel, but with higher sweetness and acidity levels.

The “Bergamot orange” pictured above is actually a Kaffir or Makrut lime that is used mostly for its leaves in Thai cooking. Bergamot is actually a nondescript looking greenish-yellow smooth-skinned fruit about the size of a common bitter orange. Unfortunately, stock photography sites like Shutterstock are full of these mislabeled images.

Superficial. I was looking for more info on the many varieties of navels.

In the 1940s -50s my great grandmother made marmalade from a very thin skinned tart orange. She sliced them paper thin with a sharp knife, added sugar and cooked up a delicacy. Is that orange available to the public now and what is it?

[…] go-to the Cara Cara. You can get some basic info about the many different types of oranges in this article from Modern […]

Is there a variety called Havlin orange

None of these oranges are what my tree bears. These are very very small with big seeds and thin peel but almost no pith. Most are the size of an olive with some as big as a walnut.
What is it called? It does make a very good marmalade.

Are Lima Oranges available to grow in the US? My husband is from Brazil, and his mom only bought Lima oranges because of their low acid. I would love to grow one alongside my other citrus.

Whatever became of Temple oranges? They used to appear in NE grocery stores in Feb but have not been around in recent years.

What the foto describes “tangelo”, I see it as the beloved ” honeybell”. It is only available for a few wks in Fl Jan and early Feb.

I am looking for information about Tupelo oranges.

Popular
7 Smokable Plants You Can Grow That Aren’t MarijuanaBrian Barth
New Solar Panels Allow Farmers to See the LightNaoki Nitta
6 Differences Between Llamas and AlpacasAndrew Amelinckx
The Cold Swim HomeMarcie Callewaert
Goat Sex: Everything You Wanted to Know But Were Afraid to AskAndrew Amelinckx
Explore Modern Farmer
Related
Food Security, news
Record-Breaking Egg Profits Prompt Accusation of Price GougingClaire Carlson, The Daily Yonder
Features, Personal Essay, Water
The Cold Swim HomeMarcie Callewaert
Books, How-To, Lifestyle
How to Turn Your Garden Into a Business, No Matter the SizeEmily Baron Cadloff
Food Waste, Opinion, Politics, Technology
How Solar-Powered Refrigerators Could Cool Down Climate ChangeAbay Yimere
wpDiscuz
We use cookies on our website to give you the most relevant experience by remembering your preferences and repeat visits. By clicking “Accept”, you consent to the use of ALL the cookies.
Cookie settings ACCEPT
Privacy & Cookies Policy