Welcome to the (Ag)gregator, where you'll find a daily offering of food and farm related stories from around the Web. Today, we hold our nose at the thousands of gallons of manure that spilled across a rural community in Kalamazoo County, Michigan; gawk at a two-headed bull that was recently sold at auction in Australia; look into a standoff between a British millionaire and a group of activist farmers who are squatting on his land; and learn about vigilantes in India freeing cattle headed for slaughter in Bangladesh. 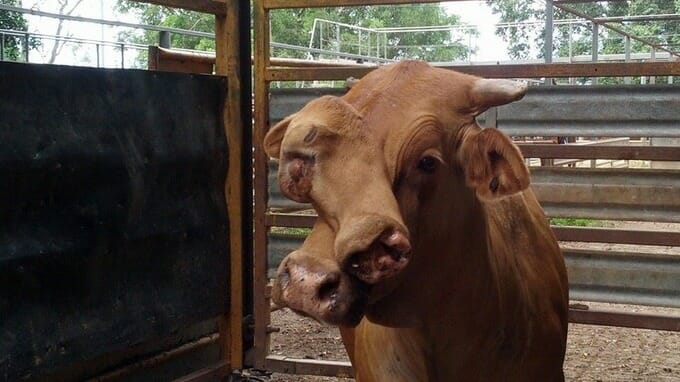 They say two heads are better than one. “Two Face,” a two-headed steer, was sold at auction this week in Queensland for a little more than $400 U.S. Unfortunately for the reportedly healthy animal whose second head has an eye, one tooth and working nostrils, he was sold to a slaughterhouse.

That’s what we call a stinky situation. After a load of manure was spread on a farmer’s field near Fulton, in rural Kalamazoo County, Michigan, a warm up in the weather created a river of poo and snowmelt measuring in the thousands of gallons that has spread on to neighboring residential properties. The state’s Department of Environmental Quality is on the case.

They even built a fort! The Yorkley Court Community Farm, a group of eco-warriors who have been squatting, and farming, on the land of a millionaire in the western part Gloucestershire County, England, have barricaded themselves, and their crops, to stave off eviction. They have also built a watchtower from recycled materials in order to keep vigil against police.

They’re on the bandwagon to ban the burger. In the of wake of a ban on cattle slaughter in the Indian state of Maharashtra and with the state of Jharkhand set to do the same, groups of young men tied to a Hindu nationalist political party have taken it upon themselves to stop tractor-trailers carrying cattle to neighboring Bangladesh for slaughter. In at least one case, a truckload of cattle was released by one of these groups.