This Gnarly, Mutant Corn Plant Could Have Serious Implications on Yields

In case you missed the recent paper on maize organ primordia in the journal Nature Genetics, here's why this is a pretty big deal. 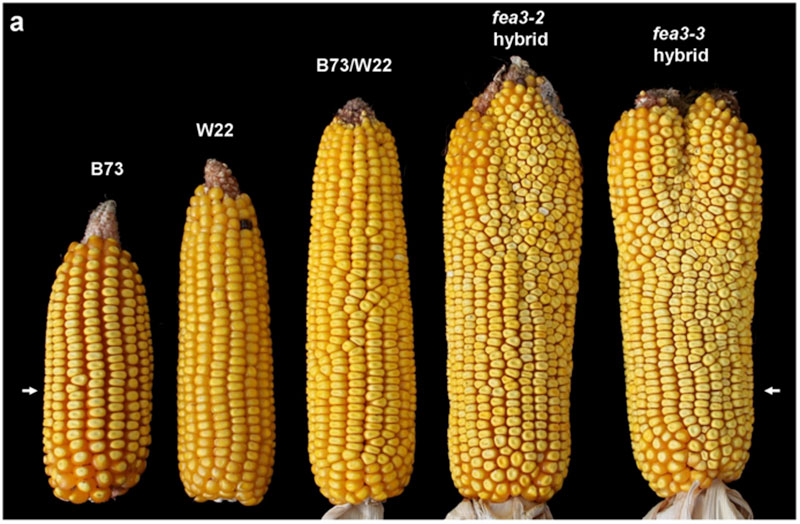 After Jackson’s presentation, a Russian corn breeder who’d been in the audience sought Jackson out and told of a strange corn plant he’d stumbled across in a test plot back home. The plant had small ears with disorganized, chaotic rows of kernels, suggesting a stem cell problem of some sort. Might it be relevant to Jackson’s research?

Eventually, a sample of this strange Russian corn found its way to Jackson, who later joined the faculty of Cold Spring Harbor Laboratory (CSHL) just outside of New York City. He held onto the Russian corn, but, occupied with other genetics research, left it on the back Bunsen burner for years.

And there it sat until a few years ago, when Jackson and his lab staff were able to turn their attention to it. Soon enough, they had discovered that the Russian corn was missing a previously unknown gene, which they named FEA3. Moreover, the discovery of this new gene led to the discovery of a new signaling pathway that regulates stem-cell production and has a direct bearing on how much corn a corn plant gives you.

The research, which Jackson has described as the most exciting he’s been a part of in well over 20 years in the laboratory, was published Monday in the journal Nature Genetics. If you’re a plant geneticist, the science itself is enthralling. Previous research had suggested the existence of this new signaling pathway, for example, but no one had ever found it before. And, unlike the other major plant stem cell signaling pathway, the newly-discovered one involves signals sent from outside, not inside, the stem cell population. (Jackson’s analogy: Imagine that as a house is built, the bricks and mortar send suggestions and advice back to the architects and builders.)

For the roughly 7.4 billion people on earth who aren’t geneticists but do eat food, the relevance of this research lies in the fact that Jackson and his colleagues used their new discovery to breed corn plants with bigger ears and more kernels that showed yield increases of nearly 50 percent compared to control plants.

“It is extremely exciting that this may have a real-world application,” Jackson tells Modern Farmer in a phone interview.

Just a little bit more science here: The strange Russian corn that led Jackson et al. to this discovery had deformed ears and a paltry yield. Its FEA3 gene wasn’t working at all, due to a natural mutation, and as a result, the plant grew way too many stem cells for its own good. In the lab, however, Jackson and his colleagues were able to develop corn plants with “weak alleles” of the FEA3 gene. In these plants, the FEA3 control system regulates stem cell production with a lighter touch, resulting in a stem cell boost that means bigger ears and bigger yields without the ill effects – like disorderly, less-efficient kernel arrangement on the cob – caused by stem cells gone amok.

Jackson calls the research the most exciting he’s been a part of in well over 20 years.

This doesn’t mean that corn farmers will be boosting yields by 50 percent next season using this weak FEA3 corn, however.

“We can’t guarantee that when they go into an agricultural setting they’ll have the same increase,” Jackson says.

For one, the control plants used in CSHL’s test fields aren’t the same varieties used for commercial production. Secondly, the process of moving scientific discovery from the laboratory to the cornfield is a long and rigorous one.

Meeley – one of Jackson’s 13 co-authors on the paper – declined to predict how long it could take before weak FEA3 corn varieties hit the market. He explained that the process of developing a commercial variety involves backcrossing weak FEA3 corn into multiple different lines, followed by at least two consecutive years of detailed testing in different locations.

Meeley added that the company has “no expectations for as dramatic an increase” as was observed in the academic research, but expressed optimism about its potential.

“Given the uniqueness of [Jackson’s discovery], I share his excitement that we can do more research to test many hypotheses about reproductive potential and yield,” Meeley adds.

Finally, Jackson and his colleagues also showed that the FEA3 is present and performs the same function in Arabidopsis, a small, fast-growing plant he described as the “fruit fly of plant genetics.” This suggests that selectively breeding weak alleles of FEA3 could allow farmers to realize yield increases in all staple food crops, not just corn. And that could, theoretically, allow them to feed more people from the same amount of land under cultivation.

For Jackson, potentially helping increase the global food supply is a rewarding side benefit of his work but isn’t necessarily what gets him out of bed in the morning.

“My primary motivation is to figure out how these genes work,” he says.