Scientists Figured Out Why Beefsteak Tomatoes are So Huge

Here's what that could mean for giant Pumpkins - and the global food supply. 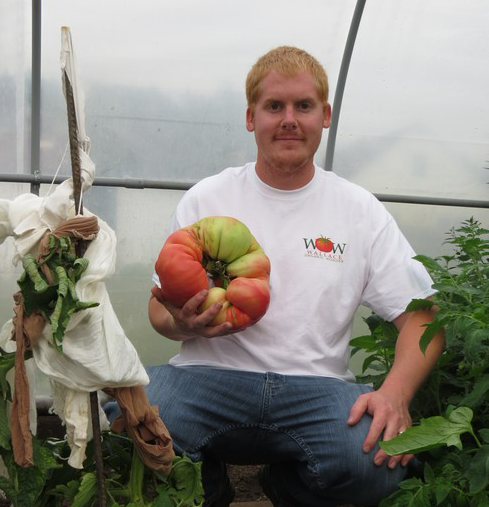 Although this was centuries before people knew anything about genes, mutation and heredity, farmers in Mesoamerica (where tomatoes likely were first cultivated) knew that planting seeds from this particular plant might give them larger tomatoes. And that’s exactly what they did.

By the early 16th century, the Spanish brought what we now know as the beefsteak tomato to Europe, and from there, the plant soon spread around the world. It wasn’t until last month, though, when a team of scientists published a paper in Nature Genetics, that we learned how the original beefsteak got so big in the first place.

“We’ve found a series of genes and a control mechanism for determining how many stem cells are produced in the plant,” says Dr. Zach Lippman, associate professor at the Cold Spring Harbor Laboratory and the corresponding author on the study. “[Now] we understand the fundamental parts of the control system.”

In the simplest terms, tomatoes and all other flowering plants have sets of genes that regulate stem cell production. One of these genes encourages stem cell production, while the other, known as CLAVATA, inhibits it. The two generally strike a happy balance, resulting in a “just-right” amount of stem cells. With too few, the plant wouldn’t grow enough; with too many, it would grow into a chaotic mess.

According to Lippman, this genetic mechanism regulating stem cells works like a dial rather than a light switch. Repress the CLAVATA gene a bit and you get more stem cells; repress it a bit further, and you get even more stem cells. In the case of the beefsteak tomato, the genetic mutation that caught the eye of the Mesoamericans randomly turned this stem cell dial so that the plants grew larger tomatoes but didn’t otherwise suffer ill effects.

Be aware that we’re in a Golden Age of giant pumpkins. The world record has been broken every single year but one since 1998, during which time it went rocketing from 1,061 pounds to last year’s astounding 2,323-pound specimen from Switzerland.

Because all flowering plants use this same stem cell regulation mechanism, these findings have Lippman and his colleagues wondering if this genetic stem cell dial could be adjusted in other plants. As in, will knowing why beefsteak tomatoes are so huge help breeders and scientists boost yields in other important food crops?

In the case of something like corn, the answer seems to be maybe – though other factors complicate things.

CLAVATA does regulate stem cells in the corn plant’s “ear meristem,” which is the tissue that eventually develops into an ear of corn. Suppressing CLAVATA’s influence would indeed increase the number of stem cells in this ear meristem and potentially result in a bigger ear of corn, says Dr. David Holding, an associate professor at the University of Nebraska-Lincoln who is familiar with Lippman’s research. But the main driver of corn’s huge yield, he says, is the tight, efficient arrangement of rows and kernels on the ear, not the ear’s overall size.

Increasing stem cells in the meristem, Holding speculated, would probably “introduce morphological differences that result in abnormal ear shape, which reduces the ability of the ear to pack the kernels so tightly.”

At the same time, one of Lippman’s colleagues at the Cold Spring Harbor Laboratory, Dr. Dave Jackson, has also published research showing that changes to stem cell-regulating genes in corn can give us the best of both worlds: bigger ears with regular, straight rows. (Jackson and Lippman both emphasize the importance of fine-tuning when it comes to increasing stem cells in the meristem. While a heavy hand is certainly bad for the plant, the right, light touch seems to boost fruit size and yield.)

“The knowledge of these pathways is very relevant to all crops,” says Jackson, who thinks that this unfolding understanding of plant stem cell regulation could indeed help boost food production in the future. 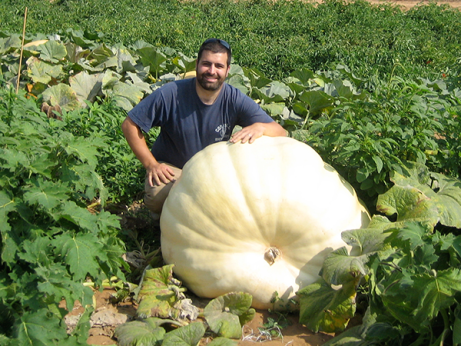 No discussion of large vegetables would be complete, though, without talking about REALLY large vegetables. And interestingly, if it weren’t for the sport of giant pumpkin growing, humankind might still be in the dark about the CLAVATA mechanism Lippman and his colleagues just described.

“I wouldn’t be sitting here right now doing this research that I do if I hadn’t started growing giant pumpkins when I was 13,” says Lippman, who was introduced to it by a Boy Scout leader.

Be aware that we’re in a Golden Age of giant pumpkins. The world record has been broken every single year but one since 1998, during which time it went rocketing from 1,061 pounds to last year’s astounding 2,323-pound specimen from Switzerland.

As far as Lippman knows, no one has investigated whether giant pumpkins owe some of their great size to the same CLAVATA mutation that gave us beefsteak tomatoes. But because giant pumpkins also use the CLAVATA gene to regulate stem cell production, it seems possible that manipulating it could make pumpkins even bigger.

One way to turn the CLAVATA dial would be to use the same cutting-edge gene editing technique that was controversially used earlier this year by Chinese scientists to modify non-viable human embryos. That’s purely hypothetical at this point. Lippman, whose future research will continue to look at other aspects of stem cell regulation in tomatoes, chuckled at the notion of seeking research funding to genetically engineer an even bigger pumpkin. But if he could wrangle the money, it would be fun, he says.

“I think it [would be] an interesting experiment, just as a proof of principle,” says Lippman, while acknowledging the public’s leeriness around genetic modification. “[But] it would probably rub people the wrong way, and I would understand that.”

“I think it would be pretty cool,” says Andy Wolf, president of Great Pumpkin Commonwealth, which sanctions world records for giant pumpkins and other vegetables. “Most guys are experimenting with something… trying to get an edge on everybody else.”

If that edge were to come through genetic engineering, Wolf wouldn’t have a personal quibble with it. In the open-source culture of giant pumpkins, he adds, growers regularly exchange seeds, tips and information. If a CLAVATA-adjusted giant pumpkin were to burst onto the scene and smash the world record, the next year, growers all over the world would be using its seeds. And thus would the steady march of giant pumpkin progress continue.

MacCoy has 11 more Big Zac plants already growing this season. He thinks a new pruning technique he pioneered last year might be the key to shattering the tomato world’s daunting 10-pound barrier. But if scientists turned the stem cell dial just so in a Big Zac tomato plant, MacCoy would “for sure” be game to try it out.

“I’m a pretty simple backyard gardener,” he says. “I don’t really get into the scientific part of it too much… Whatever gets the largest fruits works for me.”

That approach worked for that now-forgotten farmer in Mesoamerica, too – to whom the entire world owes a great debt of thanks.