Hellman’s Vs. Best Foods: Will the Real Mayo Please Stand Up? 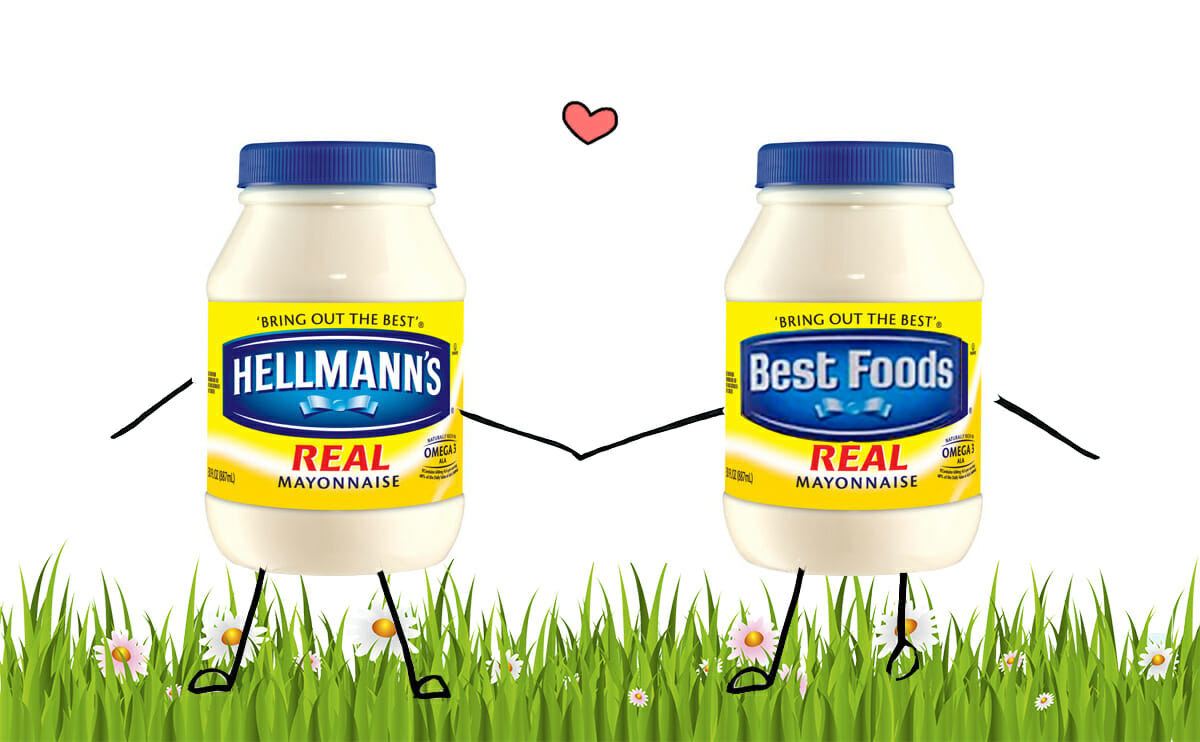 Let’s say you’re craving the potato salad of your dreams, but you’re fresh out of mayo. When perusing the condiment aisle at the grocery store, you throw a blue and yellow container of creamy goodness into your cart. But is this mayo called Hellmann’s or Best Foods? Turns out, they’re both the exact same brand — same logo and everything — but you’ll only be able to find one or the other, depending upon which side of the country you live.

If you live on the West Coast, you’re likely a Best Foods aficionado: it comes with a yellow and blue label with the slogan “Bring out the best” followed by the phrase real mayonnaise (with the word “real” highlighted in red) below the brand’s name.

But travel east, and perhaps you haven’t even heard of Best Foods. Your grocery stores are probably stocked with rows and rows of Hellmann’s, wearing the same baby blue bow and festooned with the same tall, blockish font: the exact same mayonnaise, logo and all.

This is no coincidence. In fact, today Hellmann’s and Best Foods are essentially one and the same.

The most significant day in the friendship between the two took place in the late 1960’s, when Best Foods finally adopted Hellman’s signature blue ribbon as part of their own logo.

Richard Hellmann, a German immigrant, began selling his wife’s homemade mayonnaise from the storefront of his Manhattan deli in 1905. As his mayo grew in popularity, he sold the deli and opened a factory to begin mass-producing a perfected version of this tasty, creamy condiment just a couple of years later.

Meanwhile, Best Foods owned and operated a successful mayonnaise plant out of San Francisco. When they bought Hellmann’s in 1932, they were wary of changing the brand’s name, worrying it would cost them devout Hellmann’s customers. Thus, the origins of the Best Foods-Hellmann’s reign: one mayonnaise recipe, one mayonnaise brand, two unique names.

This isn’t the only tale of two food companies living happily under the same brand image. Think of Dreyer’s and Edy’s, another example of different names, same aesthetic and an East Coast-West Coast schism.

Perhaps the most significant day in the friendship between the two mayos took place in the late 1960s, when Best Foods finally adopted Hellman’s signature blue ribbon as part of their own logo. Today, both brands are owned by multinational Unilever. Still, the company claims both the recipe and the aesthetic has barely wavered in many decades.

That’s not to say there are no issues arising from having a dual identity: They use the same marketing campaigns but are obliged to make separate but identical ads. Also, none of their campaigns can run in nationwide publications (say, mayo-friendly Modern Farmer magazine).

The recipes are alleged to be slightly different, though the exact combinations are top-secret proprietary information. Though nearly identical, some still argue that they taste slightly different (Best Foods supposedly uses a touch more lemon juice).

One thing’s for certain: One will always be completely and unarguably better than the other. You know which one it is.

I live in Laughlin, NV. If I shop at a major grocery chain, it’s Best Foods, but if I shop at Family Dollar, it’s Hellmann’s. I can’t tell the difference (if there is any).

I thought I was loosing my mind came from Michigan to Arizona and couldn’t find Hellman’s first I thought it was the store so I kept looking no was only finding this Best Foods the label looks close so I bought it thinking it was a off brand until I seen this article Omg I have only been here a month ??

NO COMMENT. ALL I CAN SAY THAT ONCE A SINGLE MOTHER OF 6 AND ON A BUDGET I BOUGHT MAYO ON SALE. SOME WERE TO SWEET SOME TASTED TO VINAGERISH. THOUGH ON A VERY TIGHT BUDGET AND NO CHILD SUPPORT I TOOK IN IRONING AN BOUGHT BEST FOODS MAYONNAISE. MY MOM AND SISTERS USED IT. NOW MY GRANDCHILDREN ALSO USE IT FOR SANDWICHES.
THE TASTE IS SO DIFFERENT AND FABULOUSLY DELICIOUS.
THANK YOU AND PLEASE DON’T CHANGE THE INGREDIENTS LIKE HOSTESS DID TO MY FAVORITE TWINKIES IT SEEMED THEY SCHRINKED THEM.
THANKS AGAIN AND I LOVE BEST FOODS MAYONNAISE.??

That’s funny here in Virginia Best foods is at Dollar tree. After all Richard Hellmann’s wife invented the recipe.

Nope, it’s not one or the other. In Texas, both labels are side by side on the grocery shelf with a different price for each. How’s that for incompetent marketing and distribution?

Honestly, I’m so happy this article exists. The explanation all made sense and I’ve been thinking I must be crazy, all over mayonnaise. Thank you for connecting all the dots.

Why is it best foods is from new jersey and hellmans is from California….explain that

My mother always said some things you shouldn’t buy generic. Hellmann’s Mayonnaise and Scott Toilet Paper were 2 of them. I’ve added Comet and/or Ajax. Spicy brown mustard and ketchup can be generic. My parents raised 7 kids, so they knew about saving money!