How does one make enough potato salad for thousands of people around the world ”“ and then send it? 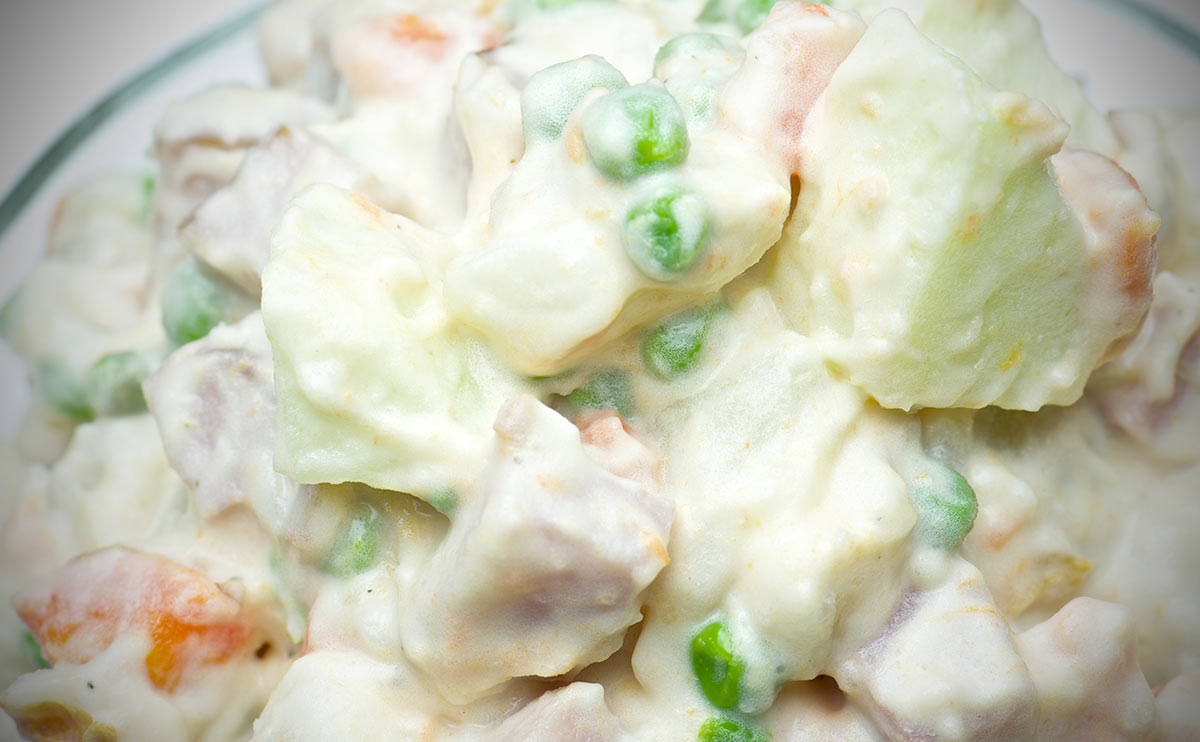 As of Tuesday afternoon, Brown’s project has already raised more than $63,000 with 24 fundraising days to go. In the two hours we spent writing and researching this story, the amount had increased by more than $20,000, and is no doubt growing as we speak. We imagine Brown is both bewildered and thrilled by his surprise success, but there is one niggling detail that may come to haunt him: The promise of a bite of potato salad to all those hungry backers.

Yes, of the more than 4,000 donors, any who pledged $3 or more ”“ that’s nearly 2,000 of them ”“ will receive a bite of potato salad. Barring the logistical postal nightmare of shipping tiny bitefuls across the Earth’s four corners, there are a whole host of kitchen concerns that will need to be addressed. Here are answers to some of the very important questions that you might be wondering about how this project might actually come to fruition.

Is it dangerous to make that much potato salad?

In its simplest form, potato salad is a harmless dish, best enjoyed fresh on a grassy knoll. But when you’re mass-producing pounds upon pounds of the stuff to be shipped, a few health and safety concerns creep into the picture. A basic potato salad is bound to include the following ingredients: potatoes, salt, chopped celery and red onion (right?), mustard (probably), and, in many cases, mayonnaise. (Brown says he will make both a mayo and vinegar version.) We can rightfully assume that there will be mayonnaise involved in Brown’s batches because the $250 stretch goal is for “better mayonnaise (from the natural foods section).”

According to Hellmann’s official site, its “Real Mayonnaise” is made from the expected ingredients (whole eggs and egg yolks, vinegar) and a few fun surprises (natural flavors), but the key addition is calcium disodium EDTA, which is “used to protect quality.” Now, this chemical is commonly used as a preservative where it helps extend the shelf life of decomposing fats and oils. EDTA has been criticized because it can be toxic at high doses, although the FDA has approved the small amounts used in foods.

Instead, Brown might select a Whole Foods favorite, like Spectrum Natural’s organic mayonnaise with cage free eggs. This fancy mayo is made with similar ingredients to Hellmann’s, but with organic versions (organic distilled white vinegar, organic whole eggs and egg yolks) and is completely lacking in preservatives. It is still, however, a commercial mayonnaise, and therefore its full of acids (and likely, pasteurized eggs) to prevent spoilage.

Brown should be fine, as long as he avoids homemade, artisanal mayos, which are generally made with raw egg yolks and need to be eaten or refrigerated promptly. It would not be advisable to use such risky concoctions in large quantities. Generally, potato salad lasts for about three or four days when stored properly; without refrigeration, it can go bad in a matter of hours. Once he begins cooking, Brown will have to make sure he has ample fridge space to store completed batches and ship them out in a timely fashion.

Can a home kitchen handle this?

Short answer: no. As explained above, the fridge space alone is incredibly important, and the average home kitchen would be quickly overwhelmed by the workload. Which is why Brown’s $3,000 stretch goal read as follows: “My kitchen is too small! I will rent out a party hall and invite the whole internet to the potato salad party.”

This, however, is troubling. A party hall? Such halls may come equipped with large kitchens for wedding caterers, but it would be wiser to look into a large commercial kitchen space, equipped with enough stovetops and refrigerators for maximum potato salad-making efficiency. Perhaps Brown is more focused on accommodating the donors who will be allowed to witness the process. Only those who contributed $10 or more will be invited, but that means nearly 900 people ”“ and counting ”“ may potentially show up. Good luck with that.

How does one safely ship potato salad?

An excellent question. Potato salad is best stored in an airtight, moisture-proof container, and must be refrigerated. Brown’s best option would likely be to purchase enough small, airtight containers ”“ hermetically sealed jars would be a nice, though pricy, touch ”“ and then follow FedEx’s advice for shipping perishable items. First, insulate the product carefully with about one-inch thick walls of foam or reflective materials to reduce heat transfer. Then, surround the container with gel coolants, which are sold in perfect tiny packs, and protect the potato salad receptacle with bubble wrap or packing peanuts. The salad should be shipped by overnight or one-day mail, so that it arrives in a timely fashion. This may sound like a lot of work for a single bite, and you would be right. Here’s where those thousands of dollars come in handy.

Will it be safe for human consumption?