How to Surrender an Illegal Milk Crate

How to earn the praise of strangers and boost your self-esteem for about $10: surrender an illegal milk crate. 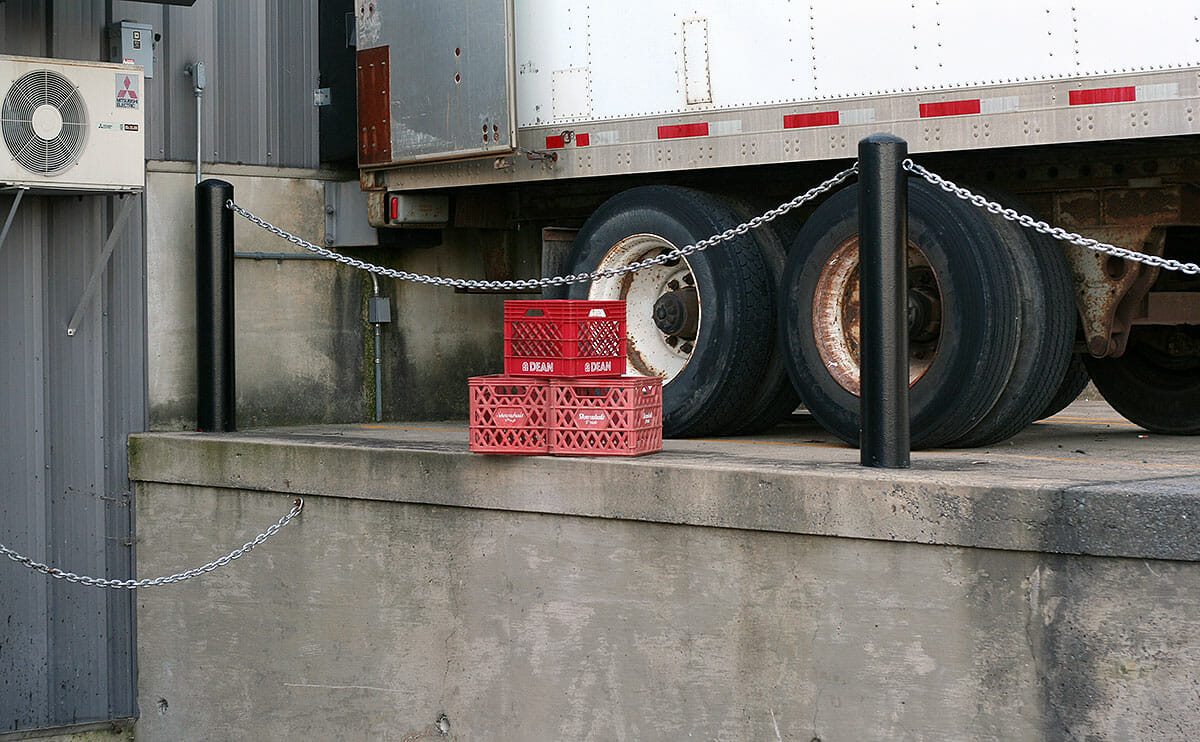 After doing some intensive journalistic work, I discovered the dairy industry is indeed serious about cracking down on milk crate theft, and, was prompted by a Modern Farmer editor to address, in print, my own illegal milk crate situation in light of what I’d uncovered. [Ed note: This was mainly done out of self-interest — we did not want to see one of our freelancers serve jail time, as we need him writing for us.]

So I publicly vowed to return my crates, and, a few days later, made a similar assurance in private to the International Dairy Foods Association, which inquired about the status of my crates by email after my article was published. I was compelled to follow through.

First things first: I had to get some replacement crates. After a little Googling, it appeared that my best option was going to be FarmPlast LLC, a New Jersey company that sells sets of three milk crates for $17.25 and lets you pick out your colors. (At the very end of checkout, they sprung an additional $15 shipping fee on me, bringing total cost up to $32.25.)

Next, I called up the dairies whose crates I’d been using without authorization. Two of the crates were marked “Shenandoah’s Pride” – a label owned by Dallas-based Dean Foods until it was phased out earlier this year. Shenandoah’s Pride still has an active phone number, though, and I left a rambling message with them about my desire to return two milk crates that were in my possession. I expected (and hoped, to be honest) not to hear back, but within five minutes, my phone rang.

I explained my situation again – clearly, this was not the kind of call Shenandoah’s Pride was used to getting – to the woman who called me back.

“I really appreciate that,” she said in a very friendly, sincere way. “Not many people are as honest as you are.”

I pointedly neglected to fill her in on the backstory and let her continue thanking me several times for being such a paragon of personal integrity. She asked where I live, and told me to leave the milk crates on the back loading dock of Red Front, a grocery store a few blocks from my house. The delivery driver would pick them them up, she said.

My third milk crate was marked “Dean” and was the one emblazoned with the truly extreme warnings about violating of Pennsylvania Act No. 37 of 1987. Back to Google I went, and turned up a Dean Dairy (also owned by Dean Foods) up in Sharpsville, Pa., just over the line from Youngstown, Ohio.

“It’s just one crate?” asked the woman who took my call, in a tone that led me to believe she might let the whole thing slide. “Hold on, OK?”

She returned to the line a minute or so later, and after we’d established that I wouldn’t be able to drop the crate off in Sharpsville, she pulled up a list of sister companies in Virginia that, conveniently, included Shenandoah’s Pride. Corporate agglomeration of regional brands to the rescue! I told her about the other Shenandoah’s Pride crates I had already arranged to return, and she said to just throw the Dean crate in with those.

She also thanked me for my incredible honesty. I again pretended that my incredible honesty was my sole motivation for returning the crates, and hung up the phone feeling downright proud of my own goodness and decency – all mine for just over $10 a crate, shipping included. 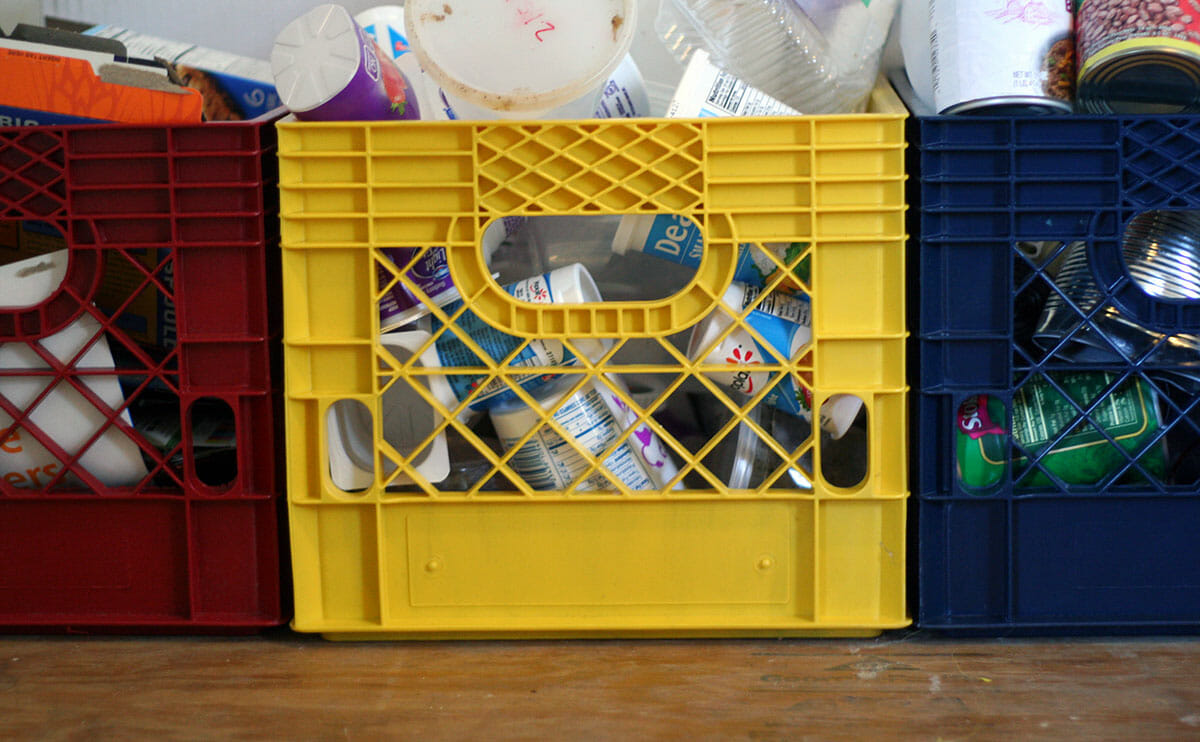 A few days later, my FarmPlast crates arrived and proved themselves perfectly adequate replacements. While some commenters in the first Modern Farmer article suggested that these legally procured crates simply aren’t as strong and durable as stolen ones, FarmPlast seems to be the real deal.

Suppose I was feeling particularly peppy for some reason, and decided not to just place my empty yogurt container in the crate reserved for #3-and-up plastics, but to slam-dunk it home into the middle crate (the yellow one)? FarmPlast is more than up to the challenge, as determined by personal field testing. Or suppose the Dairy Powers That Be don’t read this article and send a goon squad to recover their crates? These FarmPlast crates would serve well as either projectiles or bludgeons to defend my hearth and home (this assertion is a good educated guess and has not been field tested).

Last but not least, I headed out to Red Front with my three illegal milk crates, and left them piled in a lonely little pyramid on a back loading dock, as instructed by Shenandoah’s Pride. I went inside to pick up a few things, and swung by the manager’s station to announce my good deed. The manager seemed a little confused – returning milk crates is certainly not an everyday occurrence – and she made sure that I hadn’t left them such that they’d obstruct the trucks or people unloading them. I promised her they were out of the way, and she just shrugged: “Someone’ll find ’em.”

My crates were still there when I left the grocery store, and they were still there later in the evening when I took a stroll past the store to check back in. But by mid-morning the following day, they were gone – returned, I suppose (and hope), to the milk delivery cycle by a truly upstanding and concerned member of the community.

We have a Food Pantry and lately we received milk, what can I do with the milk crates

I bet there all 3 being used by a local homeless folks for seats, in case they get tired of standing and asking for money.