From Braille on boxes to QR codes for screen readers, producers are finding ways to make their goods more accessible. 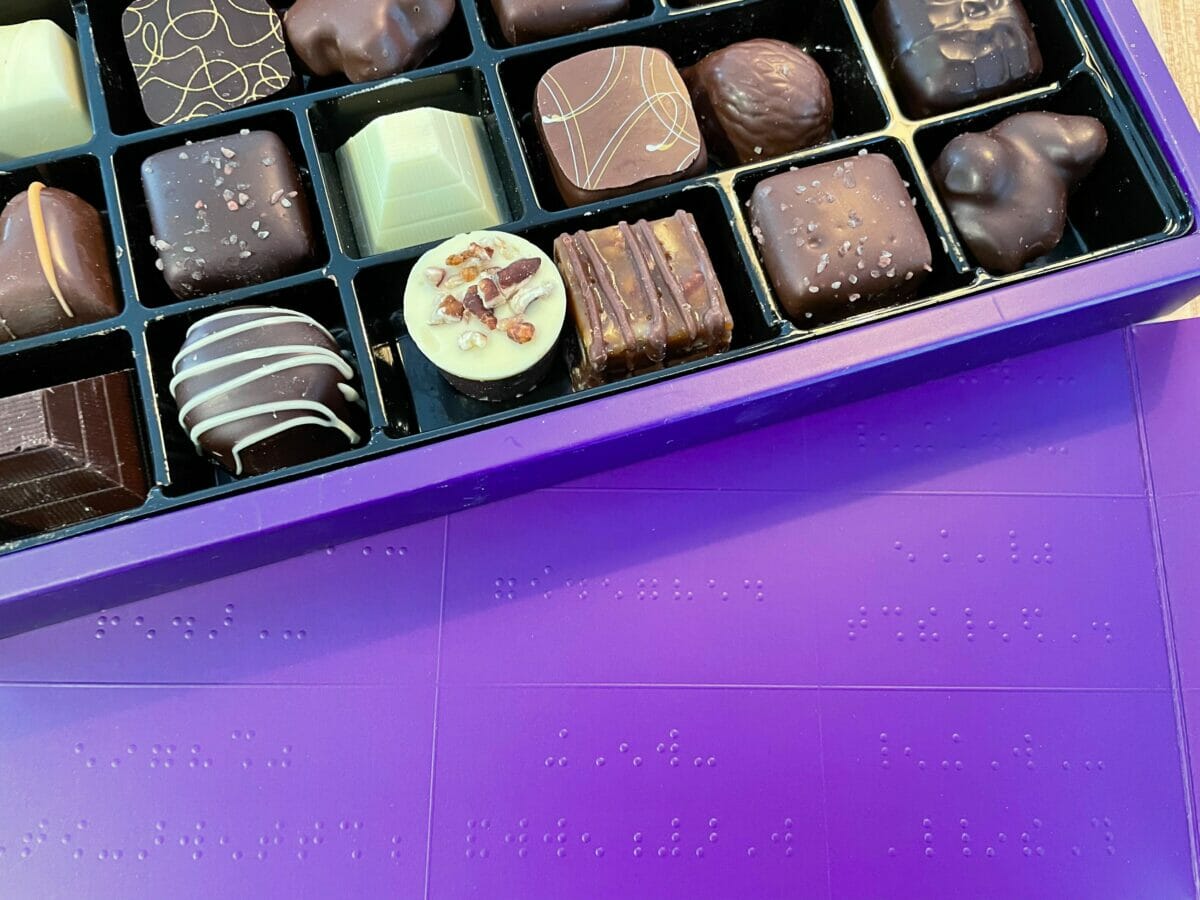 It all started with a classic box of holiday chocolates. You know the kind: a molded plastic tray filled with chocolates of different shapes and designs. What’s the first thing you do when the box makes its way around the room to you? You grab the legend to look at all the flavors, so you can pick your favorite.

Except, what if you can’t?

“It’s such an exciting moment, especially during the holidays, like fighting with your family or friends to look at the ledger and the chocolates,” says Julia Cho, content and marketing manager for Purdys Chocolatier, a Canadian chocolate company that offers all kinds of gift boxes. “It’s such a visual experience, which means that if you’re partially sighted or if you’re blind, you don’t get to enjoy that same experience.”

Purdys sought to rectify that. Working closely with an accessibility consultant, it created its first Braille Box in 2021, which was a huge holiday success, selling out two rounds of orders. It features a collection of 18 chocolates, beautifully laid out in the signature purple box, with a Braille chocolate legend. The company worked for months to ensure everything was perfect, from the weight of the paper (if the paper is too thin or scratchy, the Braille will be hard to read) to the little details, such as putting a raised L and R on the box to indicate how it should be positioned. There’s also a QR code that brings customers to an accessible screen-reader version of the legend for folks who don’t read Braille.

Putting screen-reader options on labels is growing more popular among other companies as well. At the beginning of this year, Kellogg Europe began adapting all cereal boxes in the region with NaviLens, an app designed to help with labeling and navigation, which can be read by a customer’s phone from up to three meters away. From there, the customer will be able to have information such as ingredients or recycling information read aloud to them.

The company began offering NaviLens on boxes of CocoPops as part of a trial two years ago, and it received a positive response. According to the Royal National Institute of Blind People, which evaluated the pilot project, 97 percent of participants wanted to see more features like this on products. When asked why Kellogg moved forward with an audio technology, rather than focusing its efforts on Braille or a similar tactile change, a spokesperson for the company wrote in an email that it discovered that “only 10 percent of blind or partially sighted people in the UK can read Braille so naturally, it didn’t make sense for us to invest in that route.”

That figure is accurate, and it tracks across North America as well. The low fluency in Braille can be attributed to many factors, one being that people with even partial sight can be directed away from learning to read it.

However, Chris Danielson, director of public relations for the National Federation of the Blind, says that Braille on packaging can still be helpful. “Even if they’re not super proficient Braille readers, a lot of people can read enough to find the information on a package useful.” That might be ingredients or serving sizes on food or dosages on medicine. It could be quickly differentiating which is the shampoo and which is the conditioner on bottles, making the labels easier to read in the shower. Those types of accessibility features help a lot at home, for when a blind or partially sighted person is organizing their pantry or putting things away in their own space. But in an environment like the grocery store, the product packaging is just the beginning.

[RELATED: Opinion: The Case for Putting Climate Labels on Meat]

“A lot of stores have these talking scanners now, and they talk, but they’re not fully accessible. In other words, a blind person can’t use them completely independently. But they can, for example, identify the price,” Danielson says. “Some stores are contracting with visual interpreter services. So, when you go into this store, you connect with an agent who is able to guide you around the store, without physically being there with you.”

Those types of services and accessible features can be game-changing for blind or partially sighted shoppers. And Danielson says, the sky’s the limit when it comes to innovation in this space. Adding Braille to a cardboard box is comparatively straightforward. What about shopping for cans, bakery items or produce? “It just may take some creativity,” Danielson says.

But there are already solutions out there, such as magnetic labels customers can stick on cans to notify them of things such as expiration dates. “If there’s a standardized manufacturing process, where you can create some kind of stamp that is able to stamp the Braille on each item in some way or some kind of mold bed does it, it could be possible,” says Danielson. “The trick is always going to be finding that scalable solution.”

You missed mentioning White Cane Coffee. They are the only company in the U.S. that has braille on all its packaging. They have led in innovation of using braille in all facets of its products to include adding braille to single use k-cups. whitecanecoffee.com