These companies and programs specialize in modifying farming equipment to make it usable and comfortable for all bodies. 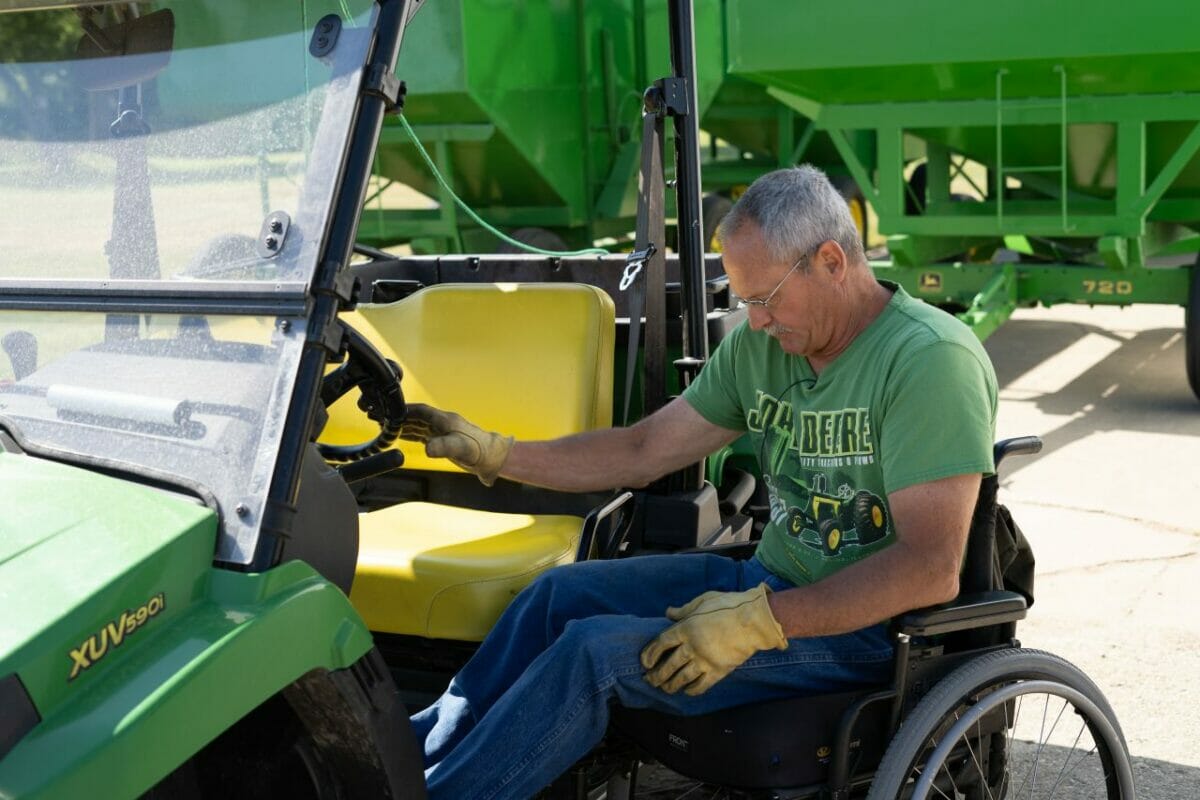 On most combine harvesters, the ladder runs straight up and down, with no curvature over the wheel. On some, the first step to that ladder is 33 inches up, more than two-and-a-half feet off the ground. That’s a hefty hike up and a big drop down, especially when you’re climbing in and out of the machine multiple times a day.

For some farmers, that’s not a comfortable maneuver. Although the cultural image of a farmer that persists in the media is often a rugged, fit and able-bodied man in his 40s, the reality is often quite different. The average age of a farmer in America is close to 60, according to the most recent Census of Agriculture. More female farmers are getting into the business. In addition, a career in agriculture comes with inherent risk. The job is highly physical, involving working alongside heavy machinery and specialized tools. Accidents and injuries on farms happen all too often, with about 100 agricultural workers injured per day. And farmers with mobility issues, disabilities or injuries may still want—and often need—to work. A one-size fits all approach to farming equipment just doesn’t work.

To help make agriculture more accessible for users, dozens of companies around the country specialize in making adaptations for tractors, lawn mowers, ATVs, gates and most other farm equipment.

One of those companies is Life Essentials, which adapts equipment to fit farmers’ individual needs. The business dates to the 1980s, when it was founded by Hubert Von Holten, who had polio as a child and wore braces on his legs. That didn’t stop him from pursuing a career in farming, even as he had difficulty getting in and out of his combine. Instead, he built himself a lift to help him do so. That lift gained some attention, so he built some more.

Seat lifts can be attached to the outside of a tractor or combine, allowing for easier access to the driver’s seat. Photo courtesy of Life Essentials

In 2002, Von Holten’s wife, Kathleen Smith, purchased Life Essentials and took over his duties, giving her husband the chance to retire. Since then, she’s grown the business’s offerings to include all sorts of customized mobility equipment. “We make lifts that mount [to the equipment], people can swing around, get on a lawnmower, and we put hand controls on tractors to be able to operate the pedals,” says Smith. “But the biggest request is a lift that mounts on the back of a flatbed pickup truck.”

Smith explains that the lift attaches to the bed of the truck, swinging around to help hoist individuals in and out of the vehicle, as well as into and out of any other equipment. The arm of the hydraulic lift raises up 12 feet high and 14 feet out to the side. “We have a guy that works on a road crew. He drives it to work and he gets into his bulldozer or whatever he has to use that day, and he can get into anything with that,” says Smith.

Many companies like Life Essentials are connected with groups such as AgrAbility, a national program that works to support farmers and agricultural workers with disabilities. Although it is headquartered in Indiana, AgrAbility has chapters in 21 states. Each chapter operates independently, funded by grants from the USDA, helping people find gainful employment, sharing information about treatment of rehabilitation programs and connecting folks with assistive technologies. 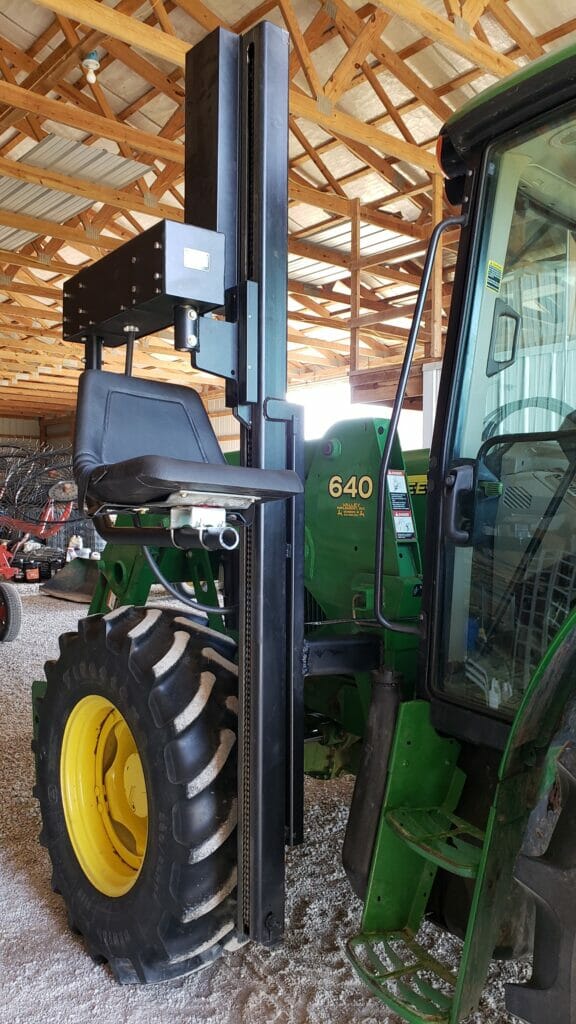 With so many options available, AgrAbility has developed an online database it calls the Assistive Technology Toolbox, which gives users access to hundreds of mobility aids and helpful gadgets. “Take the outdoor mobility section,” says Paul Jones, manager of the national AgrAbility project. “Within that, we’ve got outdoor walking and navigation, and then we’ve got eligible wheelchairs and accessories. And within that, it’s divided between wheeled wheelchairs and trek wheelchairs.”

This versatility of adaptable options helps users hone in on their specific needs. “If you’re going to be in a greenhouse, [the wheelchair you want] will depend on how wide your rows are, that type of thing,” says Jones.

AgrAbility also focuses on a specific group of farmers with a unique set of needs: veterans. Existing programs, such as the Farmer Veteran Coalition, help vets transition to agricultural work after their military service. They’ve found that, for many veterans, the new career path is a good fit. However, veterans may also need specific help and resources, as they have “more incidents of PTSD or other kinds of mental and behavioral health issues,” says Jones. “In that population, there might be more incidents of traumatic brain injury from some type of explosion.” Additionally, many vets are new to farming and need general guidance in the business. 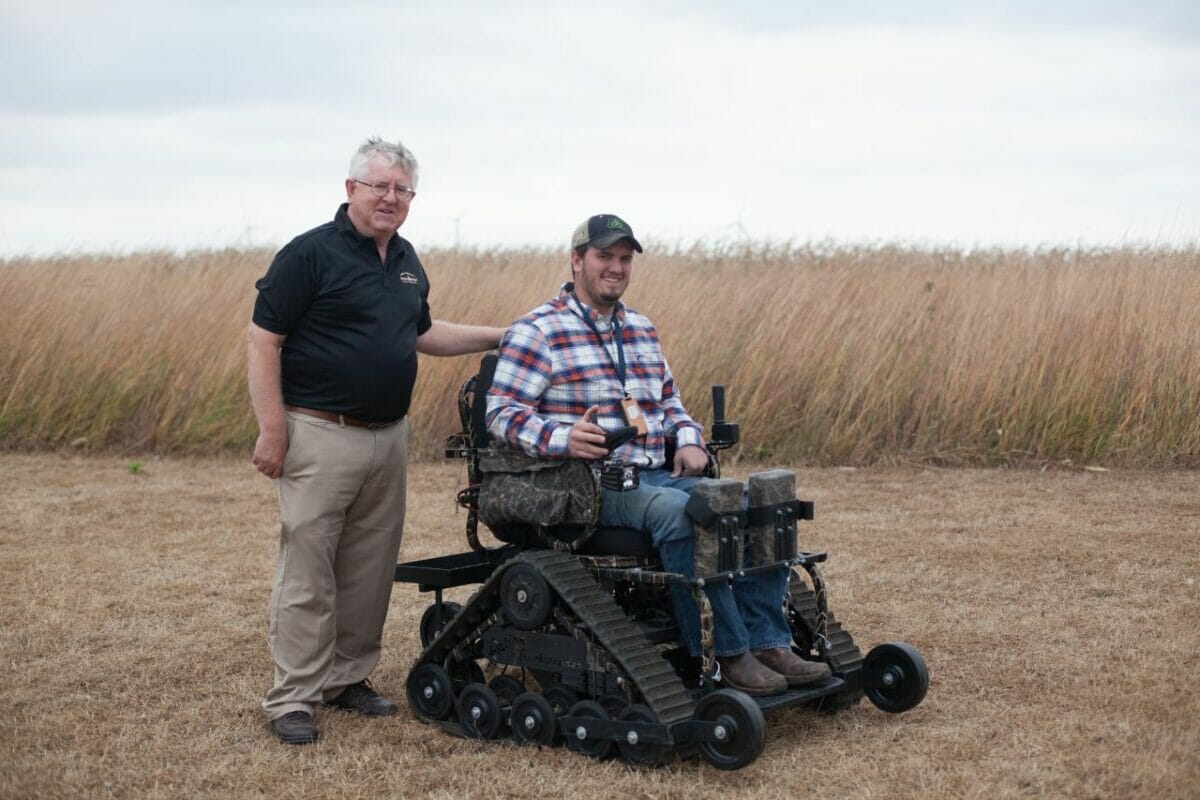 While AgrAbility doesn’t have a chapter in every state, Jones says it does provide some assistance to similar organizations and groups around the country. He’d like to grow the project’s reach. Of course, that would require funding, which isn’t always easy to come by, even when it’s laid out in the Farm Bill.

And while Jones notes that there are always worthwhile programs that need funding, it can be difficult to showcase why efforts like theirs are so necessary. “Unless you’ve got a disability, you don’t really think about things like assistive technology or what kinds of social services might be available,” he says. “The people we work with never had a clue until they got injured.” With more funding, Jones says, he hopes that AgrAbility could expand its reach and support more beginning farmer efforts across the country, including programs focused on BIPOC farmers.

Even if some of these equipment modifications and custom builds seem like fringe accessories to some people now, they’re bound to become more common in the coming years. Many new farmers joining the industry need accommodations. And as farmers age, they’re going to need to change how they work and how they access their equipment.

“People get arthritis working on the farm…They jump off trailers, they jump off the back of their trucks and hurt their knees,” Smith says. “As they’re getting older, these things just don’t work as well as they did when they were young.” Despite the toll farming can take on one’s body, Smith says most of the farmers she meets wouldn’t dream of changing careers or retiring early. There’s a reason that these companies work with farmers to adapt equipment and offer support, rather than retraining them for other careers.

“That’s what they love,” says Smith, who recalls a farmer with whom she worked in Illinois. The farmer had recently bought a new combine and had trouble climbing up into it. Life Essentials added a lift to the side, so he would be able to raise himself up to the cab. “He was 95 years old, and it was his birthday. That was his birthday present to himself, to get into this brand new combine. I think he did maybe two more seasons before he passed, but that was where he wanted to be. That’s what he loved.”

Rather than get discouraged, Smith encourages aging farmers to look into succession planning and think about how their routines will change as they age or if they get injured. “We’re here to help them continue farming,” she says. “They don’t have to suffer.”

Great idea. Need to get the manufacturers involved, too. If they think about it, providing the aids is more money for them.

As Otis said below, need to get the equipment manufacturers involved. And not just for farm equipment and differently abled people. I can tell you as a 5’2” tall person that EVERYTHING in this country is designed and built for 6’ tall people. I have issues just using our riding mower to do the lawn— if I sit far enough forward on the seat to reach the pedals, I don’t have enough weight on the back of the seat to deactivate the kill switch. Handles and hand controls are spaced to widely apart for people with small hands to operate… Read more »