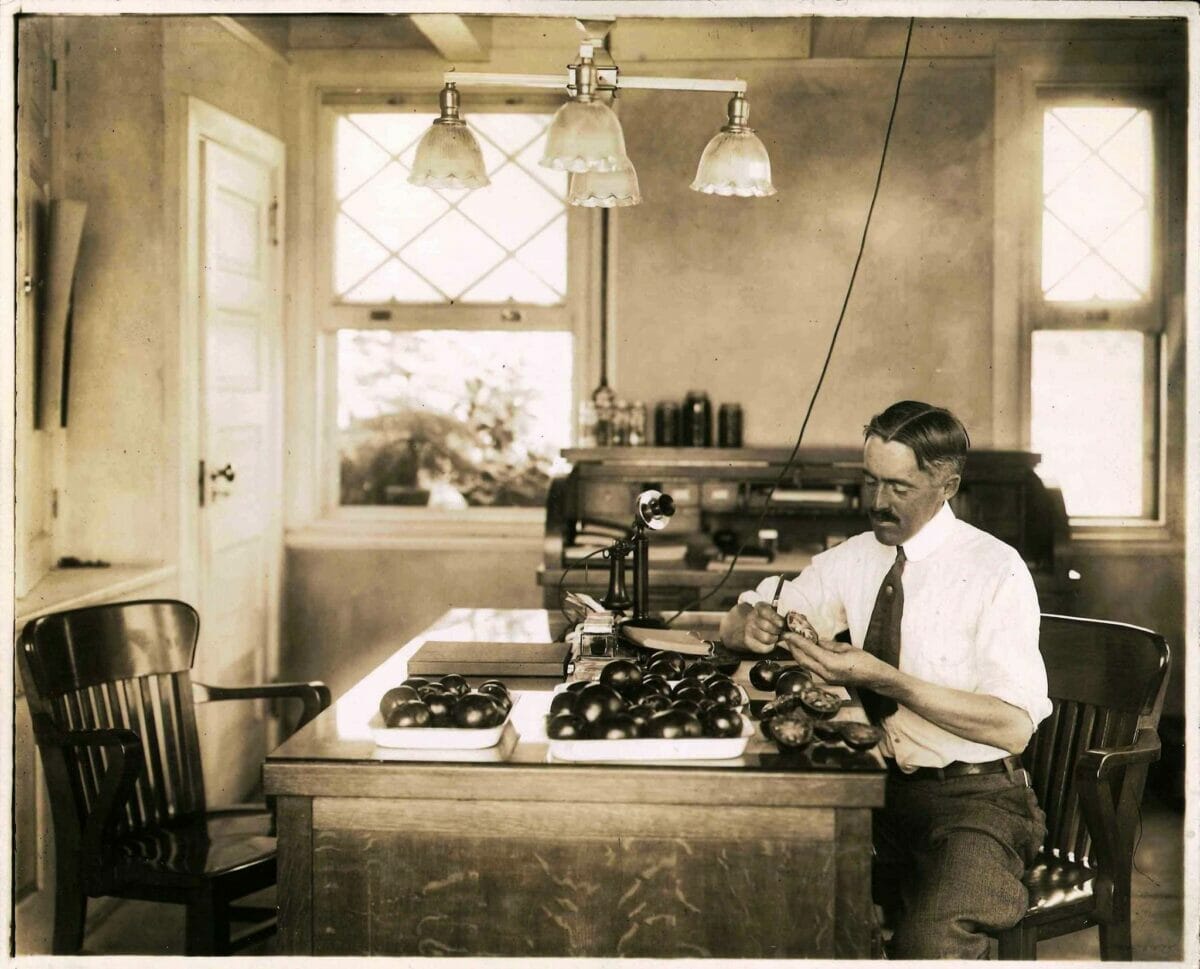 What comes to mind when you think of Campbell Soup? You might picture cans of tomato soup or perhaps an iconic Andy Warhol print of them. You probably don’t think much about the ingredients that went into those cans.

But Campbell’s did, and it bet big and early on agriculture research to grow its product offerings. One of the company’s biggest contributions to the agricultural space was its tomato breeding program, launched in 1910 in Cinnaminson, New Jersey, which involved conducting field experiments in an effort to breed different varieties for taste, production and disease resistance. A tomato research facility, added in 1937, was responsible for developing notable varieties such as the J.T.D., the Garden State and Rutgers tomato—and helped put New Jersey on the map as an important tomato-growing state.

Headquartered in Camden, New Jersey, Campbell’s once sourced most of its tomatoes from local farms. The Garden State has 24 different soil types, and most of them are good for farming. The prime growing area for Jersey tomatoes is a region now known as the Inner Coastal Plain, which covers more than 1,000 square miles in southern New Jersey, bordering the Delaware River to the west. The soil here consists of loams and sandy loam and is ideal for truck farms and high production of crops. Located within this prime growing area, Campbell’s was positioned well enough to double down on its bet that agricultural research would fuel its condensed soup products. 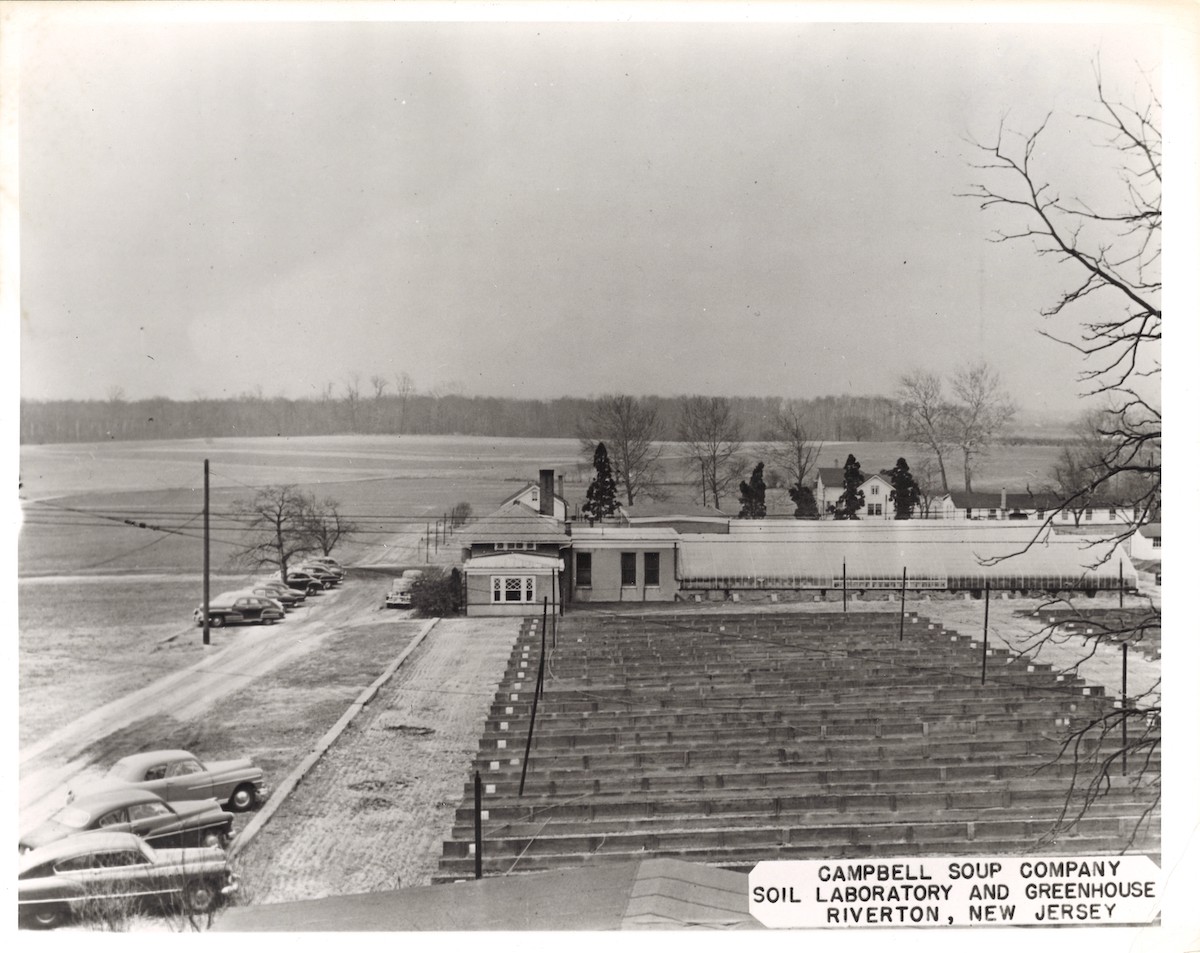 Tomato production in New Jersey can be traced to 1812, when tomato grower John Loper farmed on land owned by Ephraim Buck in Cumberland County. Tomatoes at that time were still feared by some—a nickname for the fruit was “poisonous apple.” There’s a story about how Robert Johnson of Salem, New Jersey stood on the town’s courthouse steps and publicly ate a tomato to prove that it was safe; however, there’s no actual documentation it actually happened. (Don’t tell the residents of Salem though, who, in 2021, revived an annual tomato festival that at one time was named for Johnson and includes a reenactment of the local legend eating a tomato.)

[RELATED: From Poison to Passion: The Secret History of the Tomato]

As the 1800s rolled on, and people overcame their fear of tomatoes, the savory red fruit started to catch on as a commercial crop. The canning industry was growing in New Jersey, with tomatoes making up a part of the mix of crops canned. In the 1860s, the rapid commercialization of tomato ketchup as a consumer product propelled the farming of tomatoes, especially in South Jersey, a core ketchup production area. The Campbell Soup Company was originally founded as the Joseph A. Campbell Preserve Company in 1869. In the 1870s, the company started to market its new Beefsteak Tomato Ketchup.

By 1910, when the company launched its tomato breeding program, Campbell’s had undergone a name change and released its signature ready-to-eat Beefsteak Tomato soup. The following year, the company achieved national distribution, and it needed more tomatoes to meet the demand.

One of the tomatoes Campbell’s bred was the Rutgers tomato, which traces its lineage back to the man who invented the condensed soup process, John Thompson Dorrance, when he was an employee of Campbell’s. He would later go on to become president of the company. The J.T.D. tomato, named after him, was released in 1918 and was likely bred on the farm where Dorrance lived. The J.T.D. tomato is a medium-sized red tomato averaging in the eight-to-12-ounce range. It’s uniform in shape, tasty and doesn’t crack. Campbell’s was looking to standardize its harvest with tomatoes that were a consistent size and shape, as well as taste- and blemish-free, as its production needs increased.

The J.T.D. tomato, while important to New Jersey, was even recognized on the national level. In the 1937 USDA Yearbook of Agriculture, it was described as “an interesting example of a local type developed for adaptation to a specific set of conditions and needs. It was developed by the Campbell Soup Co. for growing in New Jersey, mainly for its own factory use. It has not become widely grown elsewhere.” This work is a big contributor to the iconic status of the Jersey tomato.

An Aannual meeting of farmers at Dorrance’s home in Cinnaminson, New Jersey in 1920. Photo courtesy of Campbell Soup Company.

In 1928, the J.T.D. tomato was used in a breeding program for what has become the most popular Jersey heirloom tomato, the Rutgers. To create it, the J.T.D. was crossed with the Marglobe, a disease-resistant and historic tomato developed by Frederick John Pritchard while at the USDA’s Plant Industry Bureau. The Marglobe has a strong disease resistance to Fusarium wilt and Nailhead rust, which plagued Florida tomato growers. Once the Marglobe was introduced, it just about saved the Florida tomato industry.

[RELATED: Scientists Try to Build a Tomato That Grows 24 Hours a Day]

Once Campbell’s crossed the Rutgers tomato, the company handed it off to professor Lyman Schermerhorn of the Rutgers New Jersey Agricultural Experiment Station (NJAES). Schermerhorn did field trials for the next six years, making selections of the best plants. The Rutgers tomato was released in 1934, and it soon proved its worth as a processing tomato and one of adaptability.

As Andrew Smith details in his book Souper Tomatoes, 72 percent of commercial growers in the United States once planted the Rutgers tomato. That’s a significant share of the market. It was used by Hunt’s and Heinz, as well as the Jersey-based PJ Ritter Company, a national food processor and tomato seed company in the 1950s. 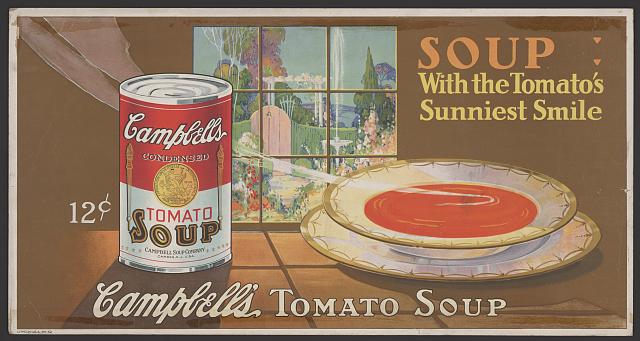 A 1920 ad. Photo courtesy of the Library of Congress.

But not long after the Rutgers tomato was introduced, tomato farming practices started to change. As harvesting became more mechanized, the thin-skinned Rutgers tomato plummeted in popularity with farmers, who were looking for heartier tomatoes that would last longer. When that happened, the Rutgers tomato lost favor as a canning tomato.

“The significance of the original Rutgers to the history of the modern tomato was mostly lost during the 1950s and 1960s as the industry moved to F1 hybrid cultivars and mechanical harvesting of processing types that are currently used in prepared soups and sauces,” says Tom Orton, a professor in the department of plant biology and pathology at Rutgers University who retired last year. “The original developer of Rutgers, Lyman Schermerhorn, also retired during the 1950s and most of the germplasm he developed during his career, including Rutgers breeding lines, was lost.”

In 2010, Orton and a team of researchers started working on the Jersey Tomato Project in an effort to revive the Rutgers variety, which was believed to be lost to history. They soon learned, however, that Campbell’s still had some original seed stocks used to develop the original Rutgers variety stored away in a vault. In 2016, the researchers were able to debut a re-bred version: the Rutgers 250, which coincided with the 250th anniversary of Rutgers University. 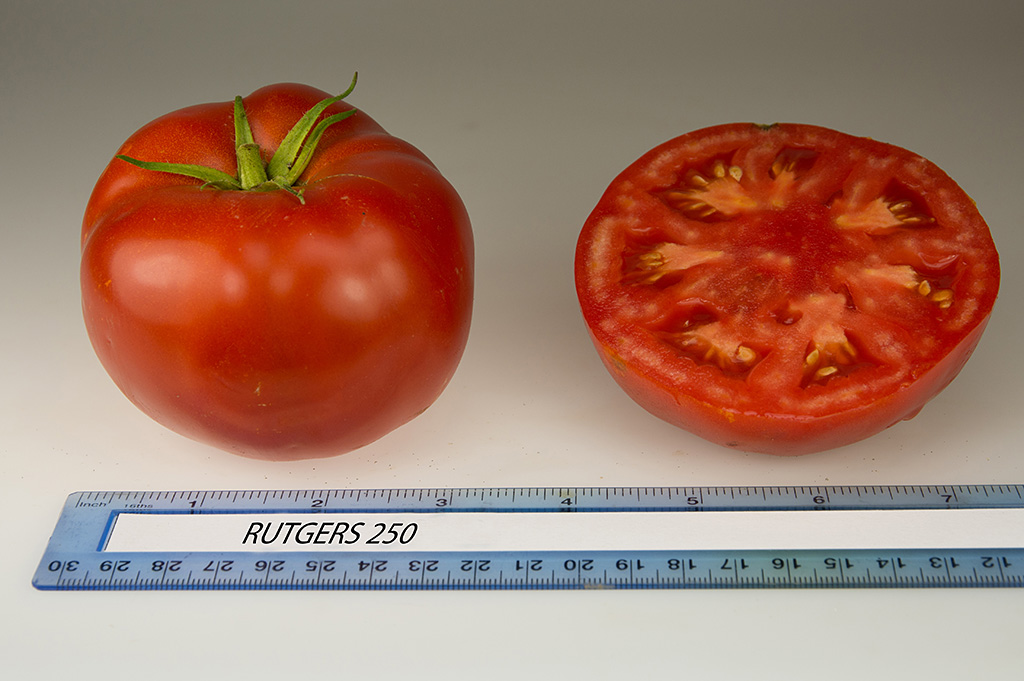 It’s great that Campbell’s had preserved the original seeds so this historic tomato could be reintroduced. Other tomato seeds were discovered, too, which the Rutgers researchers grew out as well. One of those was the KC-146, which, according to Cindy Rovins of NJAES, was developed by Campbell’s for the production of tomato juice and later used as a flavor standard as it continued to develop newer varieties.

Another Campbell’s tomato, the Garden State, was introduced by Campbell’s in 1947. In the Campbell’s naming convention, it’s also known as Campbell’s 37 or KC-37. Bred from Pink Topper, Marvel and Pritchard, the seeds are not easy to find, although they were donated to the USDA Germaplasm Bank in 1960.

[RELATED: How to Grow Your Own Tomatoes]

It’s ironic that the seeds of a tomato named for the nickname of a state known for its Jersey tomatoes, which was part of a historic breeding program, are not more widely available. Campbell’s was in the food production business, not the seed business, so seeds were not released to commercial seed companies. As the USDA noted in its evaluation of the J.T.D., Campbell’s tomatoes were mainly for their factory use—not for backyard gardeners or tomato enthusiasts.

The Garden State tomato, like many other varieties that Campbell’s was responsible for developing, is a fine-tasting tomato. It’s no wonder that Campbell’s tomato soup took its storied place in American culture, cementing itself even further when Andy Warhol painted his iconic Campbell’s Soup Can series that debuted in 1962.

Warhol once said of Campbell’s soup: “I used to drink it. I used to have the same lunch every day, for 20 years, I guess, the same thing over and over again.” In the two decades that he drank his lunch, Warhol tasted iconic Jersey tomatoes like everyone else did. Unbeknownst to any of them, they were consuming the fruits of a historic and innovative tomato breeding program.

Jeff Quattrone is the founder of Library Seed Bank, an artist and seed activist who is working to preserve local food biodiversity through seed libraries.

Noted environmental analyst Lester Brown of the Worldwatch and Earth Policy Institutes writes about his days of farming tomatoes in New Jersey. There are still many farmers in Southern Appalachia growing tomatoes. But one wonders how long these farmers will be able to farm with the onset of industrial tomatoes being raised within factory walls by people like Jonathon Webb and his team of New York City investors.

What comes to mind when I think of Campbell’s Tomato Soup? Sugar. It’s the number three ingredient (behind water and tomatoes). There’s no place for sugar in my soup.

I grew up in Salem, two blocks from the Heinz factory that produced the ketchup that perfumed our town all summer long. The trucks bearing stacked baskets full of the warm, ripe fruit would drop some of their bounty when stopping and starting at the traffic light by my family home. There were nearly always some children waiting for this treasure to fall, salt shakers at the ready. No tomato has ever tasted better!

my step father was a ob/gyn doctor in Wilmington, DE. He had patients who crossed the Delaware Memorial Bridge from southern NJ and would bring him Campbell’s tomatoes as grateful patient gifts. I remember occasionally tasting them at the end of the summer. Delicious.

Great article! BTW Loved writing Souper Tomatoes: The Story of America’s Favorite Food (Rutgers University Press, 2000). It was the final book in my tomato trilogy — the other two being The Tomato in America: Early History, Culture and Cookery (University of South Carolina Press, 1994) and Pure Ketchup: A History of America’s National Condiment (University of South Carolina Press, 1996).