How Vermont Became an Unlikely Hotbed for Saffron

A chance meeting of minds led to the discovery that growing and harvesting the spice suits the climate while also providing farmers extra income in the off-season. 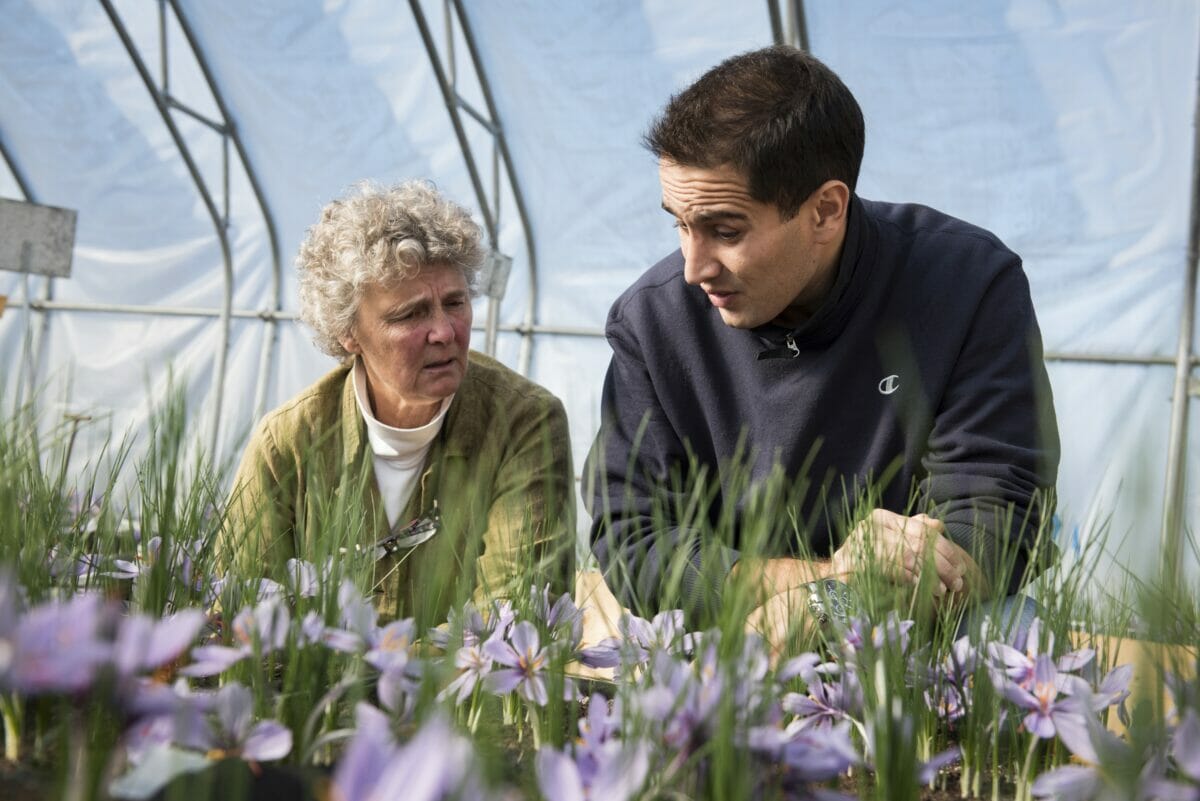 It’s autumn in Stowe, Vermont. Fire-hued leaves are reaching their peak and the growing season is drawing to a close for most local farmers. But not for saffron grower Brian Leven.

“I’m just starting to see the tips of the foliage of the flower poking through,” says Leven, owner of Golden Thread Farm, who’s waiting eagerly for bright purple flowers to burst through the soil. Once they do, he will spend a few weeks harvesting Crocus sativus, commonly known as saffron crocus, and then pluck delicate red stigmas from inside the blooms and dry them in his oven.

Renowned for its flavor, aroma and brilliant red-gold color for centuries, saffron is one of the world’s most prized—and expensive—spices, regularly selling for thousands of dollars per pound. And while the vast majority of the world’s saffron is grown in Iran and Spain, a burgeoning community of Vermont farmers are finding that the crop grows extraordinarily well in their climate, too.

Surprised? So was Margaret Skinner, a research professor and extension entomologist at the University of Vermont (UVM). Skinner, who’s worked at UVM since 1984, is always on the lookout for new ways for small farmers to diversify their income and stay competitive. But it wasn’t until she met Arash Ghalehgolabbehbahani, an agroecologist specializing in sustainable agriculture and crop diversification, that she considered saffron in a new light.

The two happened to cross paths because Ghalehgolabbehbahani’s wife was pursuing a degree in Skinner’s entomology lab. “It was just serendipity, an offhand comment that he made. He didn’t have experience with agricultural production in Vermont,” she says. But Ghalehgolabbehbahani thought the new crop could work there, and as a native of Iran, where the spice is integral to the cuisine, culture and economy, he did have experience with saffron. 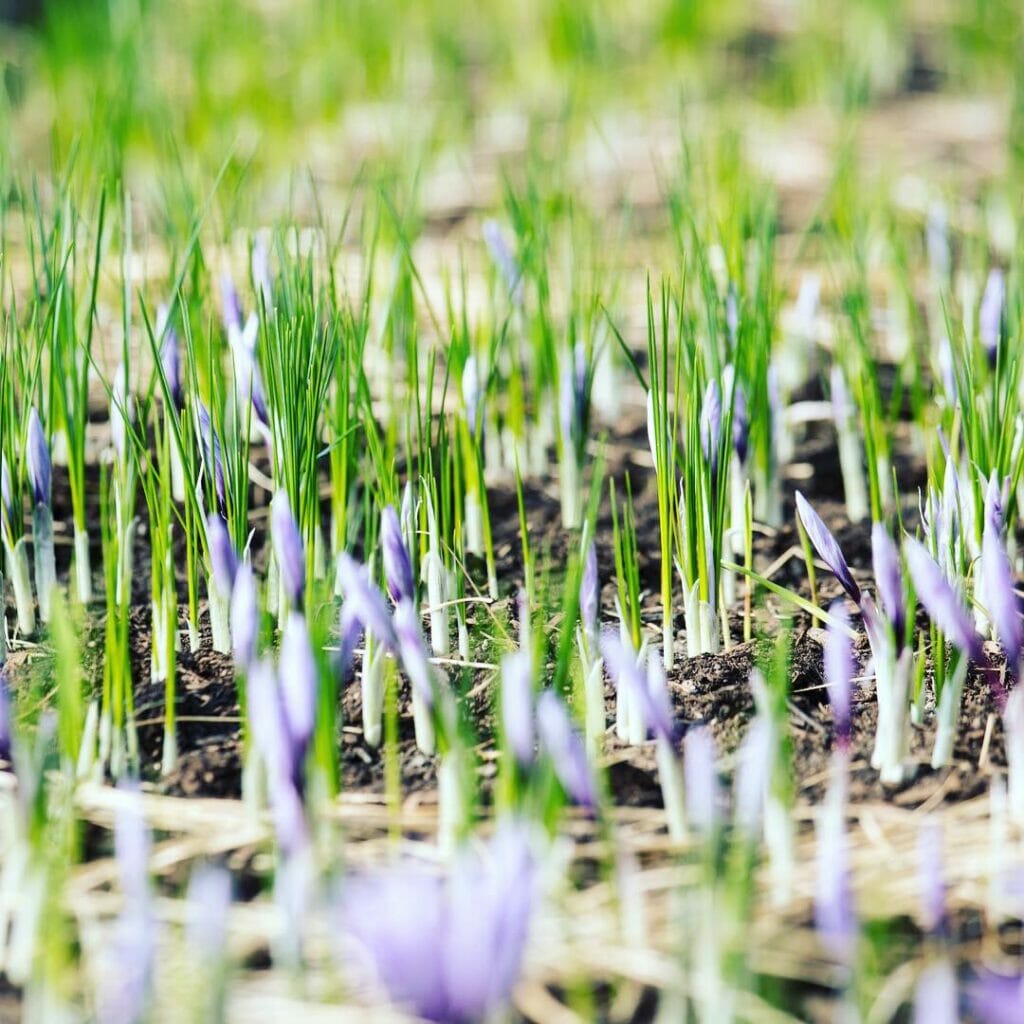 Crocuses pushing through the earth. Photo by Tasha Wallis.

The pair decided to give it a try, using a donated high tunnel for their first planting. The tunnel was “rudimentary,” Skinner recalls, without working doors, meaning the saffron they planted in the late summer/early fall of 2015 was “essentially growing outside” through a cold, snowy Vermont winter. Still, to their delight, the corms (bulb-like underground stems), nestled in plastic milk crates and raised beds, survived just fine. More than fine, in fact. The scientists found that their Vermont-grown stigmas held up in quality and yield to samples from Iran, Spain and Italy.

Two years later, in 2017, Skinner and Ghalehgolabbehbahani held their first saffron-growing workshop at UVM. They shared their initial findings with the public, involving everything from planting methods to how to harvest and dry the spice. Things took off, with intense interest from established farmers, aspiring farmers and the press. These findings, and their workshops, helped establish the North American Center for Saffron Research & Development at UVM. The Center offers a plethora of resources, from fact sheets, demos, webinars, to in-person events.

The USDA doesn’t collect data on saffron farmers, but Skinner estimates there are now 200 or so in Vermont. And word has spread far beyond the Green Mountain State. Reviewing the list for an upcoming webinar, Skinner counts attendees from 18 states, from neighboring New Englanders in Massachusetts and Rhode Island to people in Texas, Missouri, South Carolina, Michigan and Washington. At another online event, there were also attendees from three countries outside the US—India, Germany and Canada. The Center’s rapidly growing listserv, Saffronnet, includes almost 800 saffron-growing enthusiasts, researchers and marketers, from beginners and home gardeners to those, like Brian Leven, who have been cultivating corms for several years.

The Pennsylvania Dutch have been growing saffron in America for 300 years, Skinner points out, so cultivating the brilliant purple, red gold-filled flowers isn’t new to the US, or to the East Coast. “But commercially, it is,” she says, and it’s a good fit in many ways. Saffron blooms in late fall, after most other crops are done for the year in the Northeast, providing farmers extra income in the off-season. “It lends itself to really being able to supplement another larger agricultural business,” adds Leven, who, in addition to his two tunnels of saffron, also grows mushrooms and horseradish.

Saffron harvesting is “fast and furious,” says Leven. “I’ll pick flowers early in the morning and a few hours later, more flowers are ready to pick.” But it only lasts a couple weeks, requiring little work throughout the rest of the year besides watering and weeding.

Then comes the time-consuming part: plucking the filaments, the vivid crimson threads that hold saffron’s sweet, floral flavor. It’s slow work, and must be done by hand. This is one of the reasons for its great cost; it takes an estimated 75,000 flowers to yield a pound of saffron. Leven has friends and family come help; sometimes he’ll tackle a pile of crocuses while watching a movie at night. 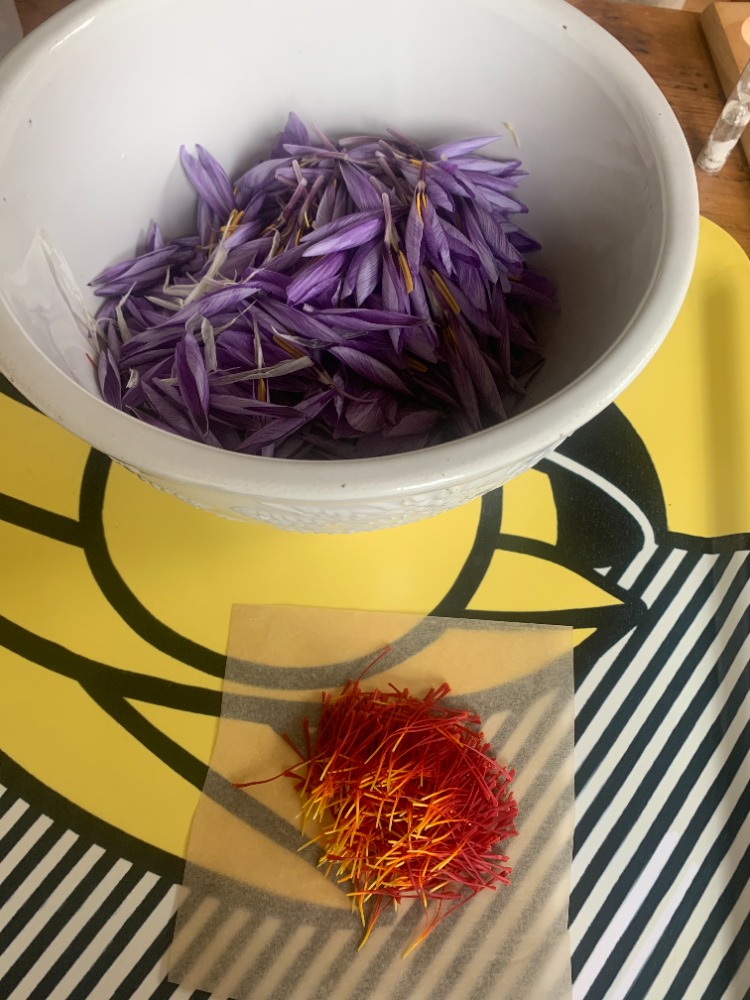 An operation can grow quickly—and naturally. “One corm in 2021 will produce five to eight secondary corms the following spring,” Skinner explains. And once saffron’s picked, dried and stored properly, it lasts for at least two years. So if it doesn’t sell at a farmers’ market, there’s no need to toss it on the compost heap, as a farmer might have to with unsold spinach or berries.

And when it does sell, it’s a potentially golden opportunity. The North American Center for Saffron Research & Development estimates saffron, based on a retail price of $19 per gram for organic saffron, could generate $100,000 per acre. But it often goes for more. Leven sells a gram for $50, while Lemonfair Saffron Co., which carries saffron from five small Vermont growers, sells a half gram for $28.

Now that UVM and farmers have proven they can grow it successfully, making those sales and growing the demand for local saffron is the next hurdle. There’s a clear demand for the spice: In 2019, the United States was the six largest importer of saffron in the world, bringing in $16.3 million worth of it. But saffron fraud remains an issue, with researchers finding that the imported spice is often adulterated, dyed or mixed with other parts of the plant or other plants.

Those growing saffron in Vermont, and elsewhere in the US, hope the fact that consumers are increasingly focused on supporting small and local food businesses, who can offer them a true and certified product, will help build on this appetite.

Parker Shorey, co-owner of Lemonfair Saffron and a Vermont native, is focused on this part of the fledgling local saffron industry. Selling mostly online and to a small number of specialty food shops in Vermont, he and his partner Hannah Marks are focused on creating more demand in the New York City area, where they both reside.

It’s going well. Since starting Lemonfair in 2017, says Shorey, “every year we’re making more of a name for Vermont saffron, and it’s really resonated. It’s a product that’s compelling.” To potential customers, he stresses that the high price tag means fair wages for Vermont farmers, including Calabash Gardens, a Black- and woman-owned regenerative agriculture saffron farm in Wells River that Lemonfair sources saffron from to dry, package and market themselves. Their little gilded jars make a great gift, Shorey tells customers, and that a little bit goes a long way in cooking. (Farmers and food producers may soon be able to share saffron’s potential health benefits, too; early research suggests there may be some, from eye health to depression.) 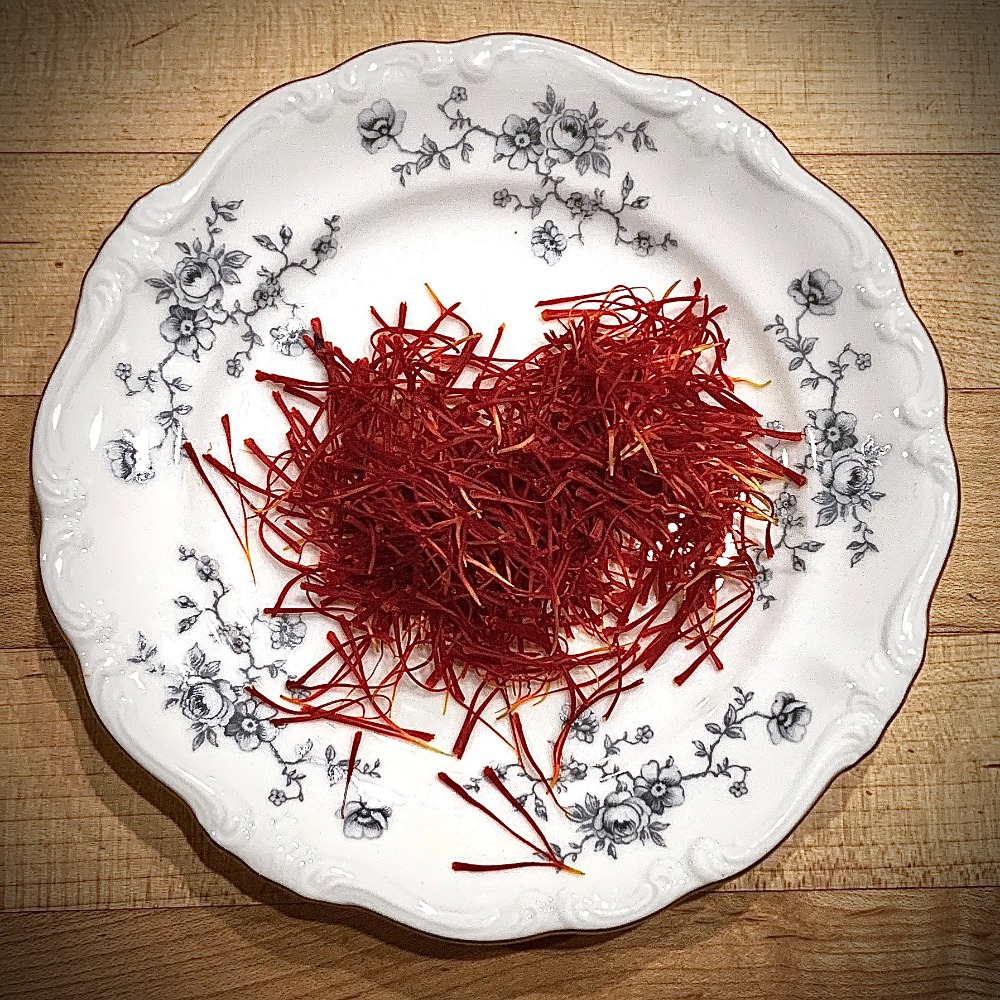 Discovering more ways to use saffron, including the petals and other parts besides the stigma, may help to expand the market, too. Beyond adding a rich bloom of saffron to paella, risotto, baked goods and sweets it’s traditionally used in, farmers and purveyors are getting creative with additional applications. Skinner has seen saffron infused and added to honey, gin, vodka and cheese; Lemonfair’s made saffron sea salt and is developing a saffron candle.

From sharing these new uses to growing techniques, the community that’s sprouted from the UVM Center is a supportive one. “People are very cooperative, they want to share their enthusiasm,” what’s working for them, and what isn’t, at the workshops or via the listserv, Skinner says. “They have fun.”

Despite this excitement over Vermont-grown, and US-grown saffron in general, producers and other experts warn that it’s not a gold rush. Shorey is concerned about how climate change may affect soil conditions for the crop in Vermont, while UVM’s Skinner wants to avoid what’s happened with hemp, when too many growers flooded the market and farmers who expected a big profit suffered as a result. She advises people to start small. “Slow and steady wins the race. We don’t want growers to lose hundreds of thousands of dollars,” she says.

For Leven, Golden Thread Farm has done well enough that his saffron pays for the annual expenses of the farm. He still hopes to make back all the money he put into his 20 acres, and coupled with income from selling saffron online, has made some inroads getting there by selling the spice to restaurants. “Chefs that have bought it from me have all said that it’s amazing,” he says. “Not all saffron is created equal, and this is absolutely pure, fresh, and grown in amazing Vermont soil.”

Yay for the Vermont farmers! Without them Vermont is New Hampshire without an ocean.

And saffron ice cream! Read the marvelous recent picture book by Rashin to discover in the author/illustrator’s story and rich playful pictures her own experience moving from Iran to Brooklyn of missing her fav ice cream flavor when going to the beach with her family. I’d like to try some : ) https://shop.scholastic.com/teachers-ecommerce/teacher/books/saffron-ice-cream-9781338150520.html

I am also growing a very small plot of saffron in Lebanon, NH. Had our first harvest this October from a planting in Oct. 2020. Looks like it does fine in our climate in an unprotected raised bed.

I live in Alberta and am wondering if this could be grown here?

American Meadows, a Shelburne based company, sells the bulbs