The evidence against cow tipping is immense, and backed up by both farmers and the laws of physics (more on that later), but the simplest bit of proof we can point to: YouTube. 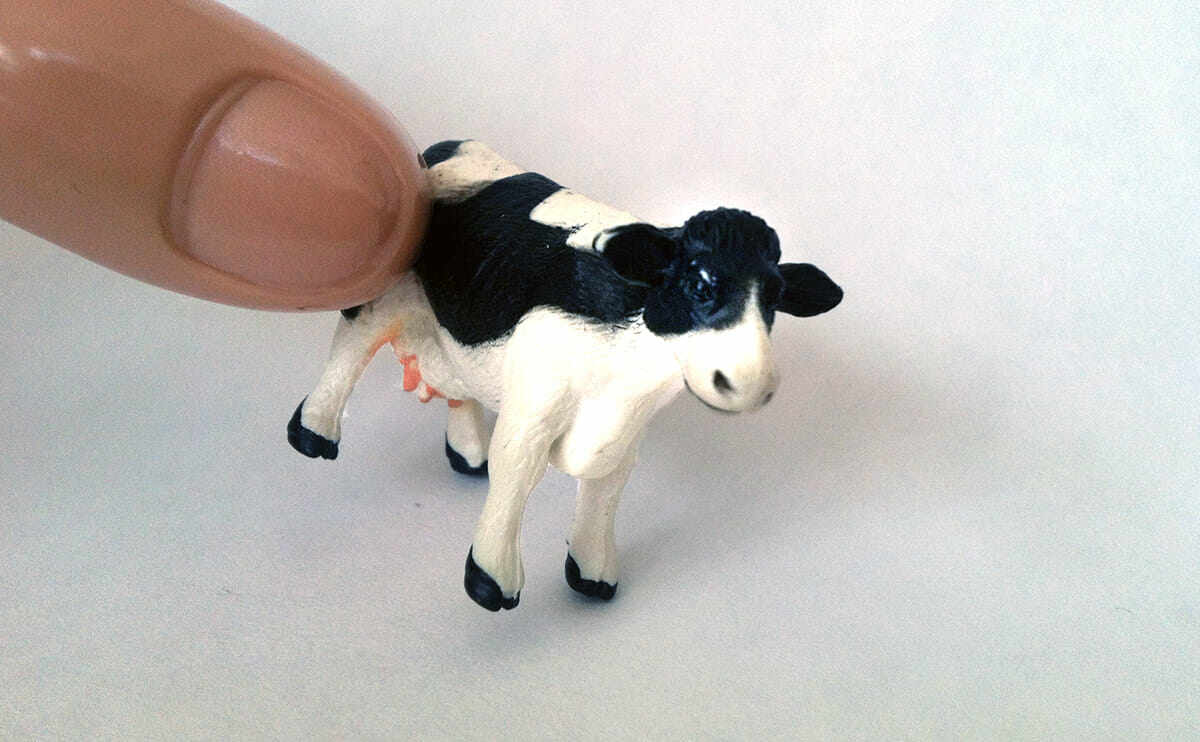 While in the history of the world there have surely been a few unlucky cows shoved to their side by boozed-up morons, we feel confident in saying this happens at a rate roughly equivalent to the Chicago Cubs winning the World Series.

The evidence against cow tipping is immense, and backed up by both farmers and the laws of physics (more on that later), but the simplest bit of proof we can point to: YouTube.

YouTube, the largest clearinghouse of human stupidity the world has ever known – where you can watch hours of kids taking the cinnamon challenge, teens jumping off rooftops onto trampolines, or the explosive results of fireworks set off indoors – fails to deliver one single actual cow-tipping video. (The one exception is a Russian dashcam video, which shows a semitruck full of cattle overturning – and cows shaking themselves off and walking away.)

And yet, ask a room full of non-farmers about cow tipping and you’ll still find plenty of believers. Despite reams and reams of articles debunking the idea, cow tipping, like crop circles, continues to exist as a strange rural legend – the difference being there’s at least photographic proof of crop circles.

So why does the myth of cow tipping persist?

A 1,400-pound dairy heifer is a broad, squarely built animal – there’s a reason the adjective “beefy” exists. You’d have more luck trying to tip over a Camry than a cow.

Part of this, of course, is that the closest many people come to a cow is seeing a Holstein along the interstate. Glimpsed at 65 miles per hour, it’s possible to imagine a docile bovine easily overturned by a blacked-out college bro. Approach a cow on foot and you’ll quickly realize how difficult the task of tipping would be. A 1,400-pound dairy heifer is a broad, squarely built animal – there’s a reason the adjective “beefy” exists. You’d have more luck trying to tip over a Camry than a cow.

Nate Wilson, 66, grew up around cows, began milking cows in 1970 and recently retired after selling his dairy farm in Sinclairville, New York. “I think I know a thing or two about cattle,” he says. And for him, the whole notion of cow tipping is, to put it politely, bullcrap. “There’s more cows that have been tipped in people’s imaginations,” says Wilson, “than in the real world.”

The Non-Fake Way to Tip a Cow

Wilson points out several factors. First off, cows don’t sleep standing up – that’s what horses do. Cows actually spend a great deal of time on their bellies, digesting food, as well as dozing on their stomachs. Secondly, cows are naturally wary animals. Observe a group of cows laying down in a pasture, Wilson says, and you’ll see that no two of them point in the same direction – part of their instinct for protecting the herd against the many natural predators cows once faced. Beef, as Wilson jokes, has been what’s for dinner for as long as cattle have existed. As a result, they have “incredibly well developed senses of smell and hearing.”

Wilson says that even after years of working closely with his cattle, they would remain apprehensive when he approached at night. “A group of strangers walking up on them?” he says with a laugh. “I don’t think that’s going to be possible.” In his many decades of dairy farming, Wilson says he never heard of cow tipping occurring in his own fields, or in the fields of any fellow dairy farmers.

But say our hypothetical cow tippers got lucky enough to get close to a cow at night. There’s still the matter of the brute force needed to get the cow over. In 2005, University of British Columbia student Tracy Boechler and doctor of zoology Margo Lillie ran the numbers on cow tipping. Their findings? There’s no way one person could tip a cow. Two people? Maybe – but not in real world conditions.

“Two could do it in theory,” says Dr. Lillie. “But it’s not going to be easy, and as soon as the cow responds by bracing herself or leaning into you – which she will do – it will be even harder.” Cows, after all, stand on four legs and will quickly shift their weight to a wider, more stable stance if pushed against. And Lillie and Boechler’s calculations are based on an unmoving cow in equilibrium in which slow, steady force could be applied without pushback – an optimum (and unrealistic) state for cow tipping. Pull out your high-school text book and look up Newton’s Second Law: Force equals mass times acceleration. A cow has a lot of mass, and you’ll want to move that mass quite quickly, before the cow can react. Which means you’ll need to generate a lot more force. Per her calculations, that would require at least five, and probably more like six pushers. “It just makes the physics of it all, in my opinion, impossible,” says Dr. Lillie.

The paper, which poured cold water over cow tipping, drew a fair amount of attention online. “I couldn’t believe the number of people responding to one article,” she says, with the weariness of a doctor of zoology who now gets regular phone calls about cow tipping. “Someone, I think he was in Texas, said you can do it if take you take a run at the cow and got somebody [down low] on the other side of the cow,” in effect taking away the cow’s ability to brace itself. “So that’s cheating, but that’s a way of doing it,” says Dr. Lillie. “Of course, the guy on the other side of the cow has to move very quickly to get out of the way, which is a stupid thing to do. But the whole thing is just a stupid thing to do from the get-go.”

So, then, here is our working theory on the persistence of the myth of cow tipping: First, the idea itself is funny. Sabina Magliocco, professor of Anthropology and Folklore at California State University, points out that a good myth or legend has the same element as a good joke. “They involve ‘symbolic inversion,'” she says. “You’re putting the world – or in this case a cow – on its side.” A dozing cow being knocked over has a certain Jackass-esque appeal to it, the wham-bam brutality of something large and seemingly immobile suddenly going ass over teakettle.

Second, starting in the mid-’80s, cow tipping became something of a pop culture phenomena. Two meatheads spend a drunken evening cow tipping in the ’80s classic Heathers. Beavis and Butthead unsuccessfully went cow tipping. Chris Farley ends up with a face full of cow pie after going a failed cow tipping expedition with Rob Lowe in Tommy Boy. Dairy farmer Nate Wilson says he never heard of cow tipping until the late ’70s or early ’80s and wonders if the infamous sequence in Animal House, in which a horse is snuck into the dean’s office, had something to do with it. “Maybe that got the wheels rolling on this,” he muses. That cow tipping plays into certain preconceptions about the paltry entertainment options available to those in rural areas doesn’t hurt either.

Third, cow tipping is essentially a muddier, drunker, and more dangerous version of the snipe hunt. You take a wet-behind-the-ears kid out into the field, feed them a few brews, and tell him to go find Bessie and give a good shove. You, meanwhile, spend some quality time listening to someone slipping and sliding in a dark and muddy field.

In other words, as long as there’s booze, gullibility and a pasture nearby, cow tipping will live on. Luckily for the cows, there’s very little chance they’ll ever end up actually on their sides.

I love this article! I grew up in a “dairy town” and I had never heard of this until I moved away for college (in a city). If you grow up in an area full of farmers — the area is knowledgeable enough to realize that any cow tipping story is just that … a story. Yet … I have been assailed with many a tall-tale teller insisting of the time they went cow tipping <insert eye roll here>. First, we know you’re a liar; second, if the stories were true … why would animal cruelty be funny? What kind… Read more »

Went cow-tipping once with my cousins when I was a teenager, and my experience confirms about everything here. The vast majority of cows were laying down, making them untipable. That said there were still a handful upright that were sleeping or at least dosing off as far as I could tell (but it was pitch black so I am perhaps wrong on the state of their awakeness) but we never got anywhere close to them. We weren’t especially loud, but we weren’t perfectly silent, either, and just brushing over the grass was enough to startle those standing and laying down… Read more »

We tipped over young cows in my Bavarian dialect called “Schumpen” when I was young and little more stupid than today.
They tipped over like chopped trees. It was pitch dark and a single person could manage that with a hard push from the side. Funny how the experts are coming up with reasons why it shouldn´t work. Just try it. Cheers.

It looks like it’s been over a year since anyone has commented on this, and maybe it’s best to let it die, but I want to point out that I graduated from high school in 1961 and there were many cow tipping stories back then, so your supposition about Animal House is not correct. I never personally did any cow tipping, and I never knew anyone personally who did, but I always marveled the stories told to me by friends who never did it either. Snipe hunts and campfire stories and prosthetic hooks left on your car’s door handle while… Read more »

For the unenlightened among us – specifically those who have never heard of ‘cow tipping’, you neglected one important piece of information. What the heck is it? I mean, April Fool’s day is still months away!

Anyone idiotic enough that is unproductive enough with nothing better to do with their time then run around sneaking up on productive livestock and risk injuring THEM and make fools out of themselves are generally a waste of human flesh. Grow the hell up

The trick is to tie the hooves together… tightly… then easy peasy. One person can easily tip a cow, if it doesn’t go down on its own!!!

I just read this article and had a giggle. I grew up in farm country and never heard about cow tipping until I was out of college in the early 80s. At first, I wondered if it could really be true, then I put a modicum of common sense behind it and realized it was total fantasy. Cows are freaking heavy. They don’t sleep standing up. They awake very easily if approach, even from a distance at night. If you do get up close to them and they are standing, soundly asleep, if you wake them in any way, one… Read more »