Mike Fortune has a plan to save the planet from corporate corn with a strange botanical goo. 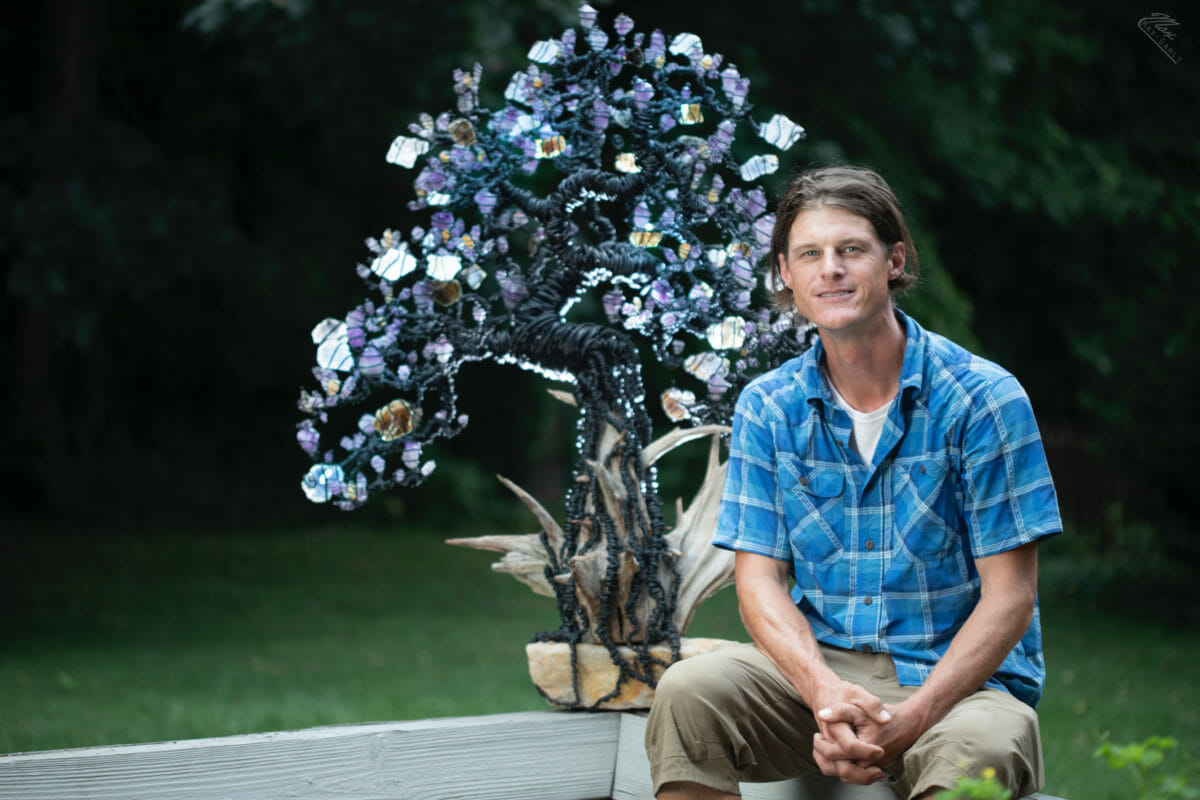 In 2003, Mike Fortune left a budding career as a stockbroker and moved to Asheville to start an urban farm. He eventually found a willing landowner on Greenhill Avenue, in the city’s west end, with a large backyard that slopes down to railroad tracks. Several adjacent neighbors volunteered their backyards and soon Fortune had nearly four acres under cultivation, spanning the slope behind the houses on one side and a used car dealership, bowling alley and Rocky’s Hot Chicken Shack on the other.

Amid vegetable plots and an orchard of 500 trees at Green Hill Urban Farm is a stage where he hosts intimate concerts and theatrical performances; an adjacent bank lends its parking lot for weekend events so the neighbors don’t complain. It’s a hub for “neo-agrarian culture,” says the 40-year-old.

Green Hill Farm quickly became an institution among Asheville foodies. Fortune leased several acres outside the city to keep up with demand for his produce. He also managed two additional farms that supplied local restaurants, as well as the market gardens of a nearby estate. But he’s now scaled back his operation to focus on a new endeavor.

Fortune had a life-changing experience several years ago when his friend Hector Diaz, an Asheville restaurateur who was one of his biggest clients, invited him on a trip to Lima, Peru to experience the Mistura Festival, the largest annual food event on the continent. Amid an encyclopedic array of South American foods—stalls of strange Amazonian fruits and spices and earthen pit fires for roasting exotic game—Fortune discovered what has become a consuming passion: high-altitude Andean corn.

Among these ancient varieties is Cuzco Gigante, which produces two-foot ears on stalks up to 25 feet tall; kernels can be up to one inch in diameter. Another is the deep purple Maiz Morado, which is used to produce chicha, a fermented corn drink popular throughout the Andes. Few North American growers have had success with these varieties, which have evolved on farms at up to 15,000 feet in elevation, but Fortune found they did quite well on his southern Appalachian farms. They need a long growing season, he says, but cool temperatures. “Asheville’s latitude and altitude seemed to be the right combination,” he says.

Fortune was already producing North American heirloom corn for beer—the owner of Asheville’s Bhramari Brewing Company is a close friend and client—and selling it to chefs who used it for grits and cornbread. He thought the enormous, vividly colored South American varieties would be an interesting novelty to add to the mix. But then he learned something that blew him away: Some of those corns excrete a mucus-like goo that feeds microbes, which in turn excrete nitrogen fertilizer for the plants. 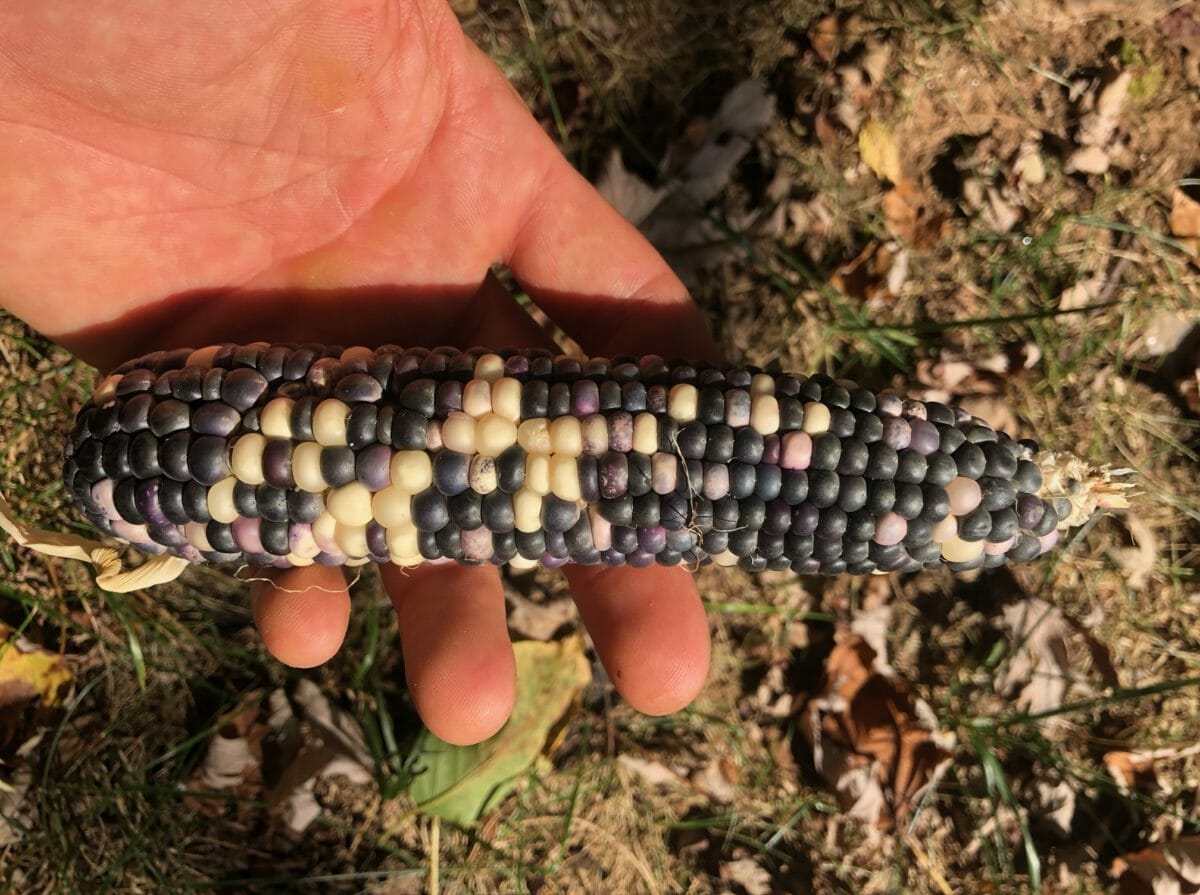 Scientists have long known that legumes produce their own nitrogen in collaboration with microbes that live on their roots, but the process is scarcely known in other plants. In 1980, a botanist named Howard-Yana Shapiro (who later founded the heirloom seed supplier Seeds of Change) discovered the corn goo while on an expedition in a remote area of southern Mexico. He hypothesized that nitrogen production was somehow involved, but he could not prove it. Scientists have only recently taken an interest in this obscure botanical mystery, and, last year, a group of researchers released a paper confirming Shapiro’s hunch: With the help of bacteria, the plants were producing up to 80 percent of the nitrogen they required.

Fortune saw news reports of the findings and was surprised to see that what they described matched the strange behavior he’d observed in his Andean corn plants: Unlike legumes, which produce the nitrogen underground, the nitrogen goo on corn is plainly visible oozing from the tips of “aerial roots” that sprout from the stalks and grow toward the ground.

“It’s these octopus-looking roots that eventually reach the soil and provide stability for the tall plants,” says Fortune. When he began posting about it on Facebook, South American farmers he had been in touch with “were like, oh yeah, we harvest that gel and make a fertilizer tea to spray on our other crops. This has been common knowledge to them for eons, but somehow, in North America, we’re just now learning about it.”

Fortune’s corn project took on a new urgency. It’s surprising that microbial nitrogen production in corn had not been previously documented, as the Andean varieties grow to their enormous proportions in rocky, infertile mountain soil, without the use of supplemental nitrogen (the same is true of the Mexican variety Shapiro discovered, which also grows to gigantic proportions). The modern corn varieties that now blanket much of the world’s agricultural land have extremely high nitrogen requirements, and the synthetic, fossil fuel-based fertilizer used on them is a major pollutant, contributing to catastrophes such as toxic algae blooms in Lake Erie and the Gulf of Mexico dead zone.

“Creating a corn that can feed itself is like the Holy Grail of sustainable agriculture,” says Fortune. 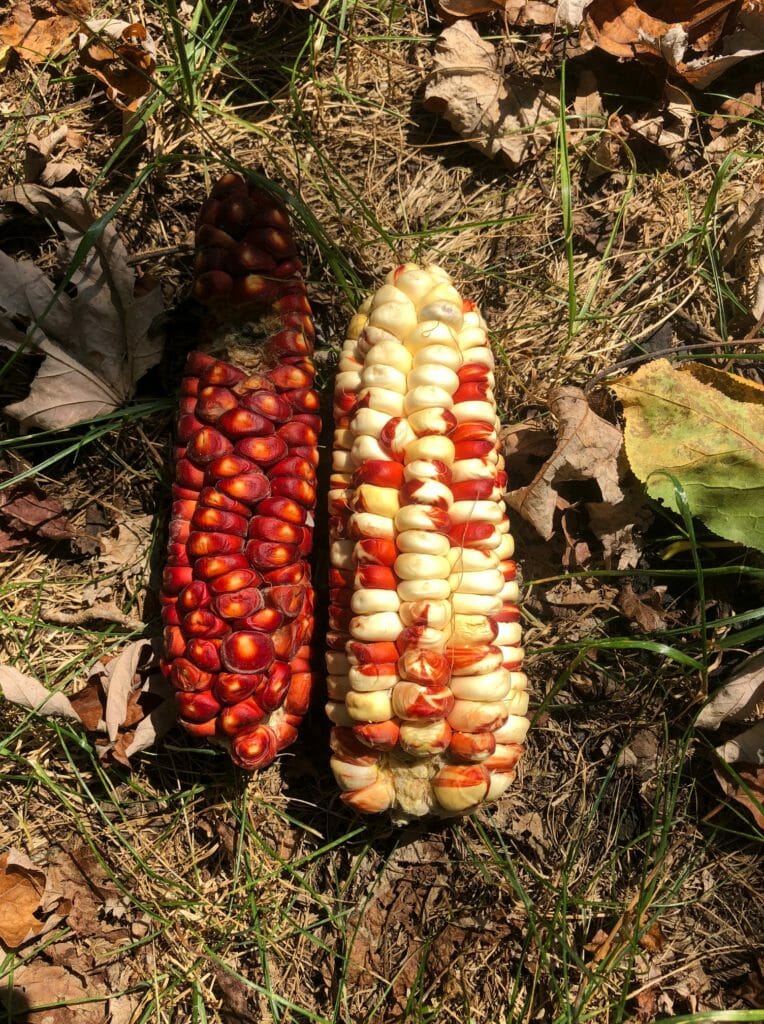 The self-feeding Latin American corn varieties, with their house-high stalks and predilection for mountain climes, are not well suited to commercial-scale agriculture in North America. Various bioengineering firms are currently working on breeding the nitrogen-fixing trait into modern GMO corn varieties, but Fortune wonders how much backing such efforts will find in the agribusiness world. “The big seed companies are owned by chemical companies that also sell fertilizer, and they don’t want a corn out there feeding itself,” he says.

Fortune would like to see nitrogen-producing corn grown on a large scale in the U.S. as well, but he’s pursuing a different path for getting there. Using old-fashioned breeding techniques, he’s begun to hybridize self-feeding Latin American corn varieties with North American heirlooms, such as Painted Mountain corn, a strain developed over thousands of years by tribes in the Great Plains region, in hopes of producing a new nitrogen-producing variety suitable for large-scale organic production in the American corn belt. He does the hybridizing at his farm in Asheville, but he grows out the seed on a large farm in Illinois in order to select offspring that perform well in traditional corn-growing country.

It typically takes seven “generations” of hybridization to produce a variety in which the new traits reliably appear, says Fortune. “I think it’s only a matter of time until I’ll have not just interesting and colorful new corn varieties available but a new type of environmentally beneficial corn that revolutionizes American agriculture,” he says.

In the meantime, you can enjoy the products of his experimentation in Asheville at the Bhramari Brewing Company where they’re being made into beer.

Amazing story. A triue pioneer. He should probably hire a security detail before he’s taken out like so many of the holistic doctors have been.

I would hope that another project for Mr. Fortune would be to figure out a way that we in Louisiana could enjoy what was known in the 60’s as “horse corn”. It made the best corn soups and stewed corn. There was flavor in it, not just sweetness as in today’s corn.

In the 1970’s William Denevan, now an emeritus professor of geography at the University of Wisconsin discovered a perennial species of maize (corn) in Mexico.
Efforts to promote it were, I understand, stifled by U.S. seed companies.
You folks at Modern Farmer, or elsewhere, may want to explore this story…

Thank you to all the knowledge sharers and to the people who have tended this corn ? in balance and scared relationship with Mother Earth ever since the beginning.
✨ thank you Mamma Maiz for nourishing us all.
Deep gratitude for all my neighbors here doing such important work.❤️

I have a small garden area on a mountain in Tennessee. I would love to see if this corn would grow good here. Is there any way I could acquire a few of these corn seeds to try here?

Id like to save this article this guy can save my farmland with this new corn id like to work for him.

With the onset of the modern eras super grand solar minimum, cooler growing season temperatures will be common. The Latin American variety would likely grow as is, with no hybridization required.

We are growing an interesting variety of corn from Guatemala. Very tall and wind resistant, with extensive root system. No bugs.