And how supporting small, diversified dairies can lead to peace. 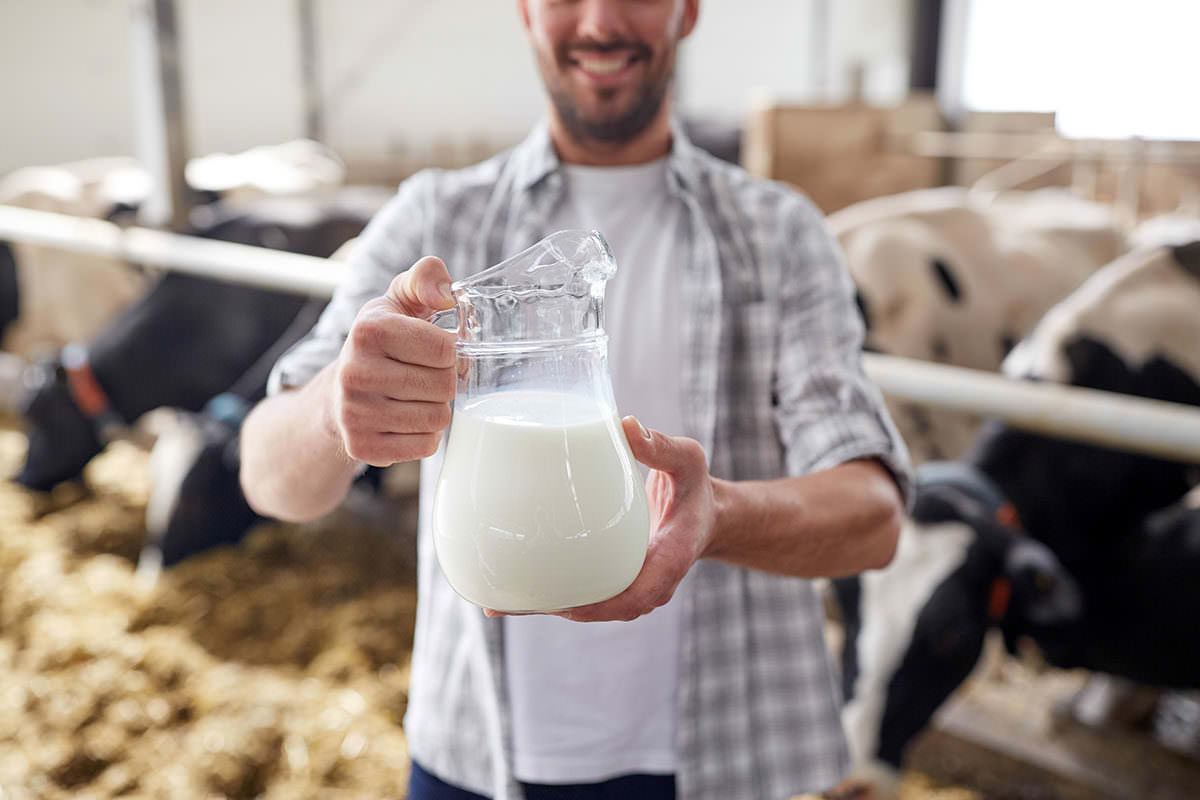 U.S. dairy farmers don't have much to smile about in regards to Canada's new dairy pricing schemes...but whose fault is it?
Photography Shutterstock/Syda Productions
Share
Tweet
Pin
Email
3K Shares

Canada has made business for our dairy farmers in Wisconsin and other border states very difficult. We will not stand for this. Watch!

The President was referring to an on-going dispute between American dairy producers and their Canadian counterparts over ultra-filtered milk, a concentrated dairy commodity often used in industrial cheese- and yogurt-making.

U.S. producers, particularly in Wisconsin and New York, have exported large quantities of ultra-filtered milk to Canada in recent years, but last year several Canadian provinces made changes to their dairy pricing schemes, which suddenly made domestic ultra-filtered milk cheaper on the Canadian market, effectively undercutting U.S. milk and forcing American dairy companies out of the Canadian market.

Why would Americans think that another country should bend the rules to favor imports over domestic products?

In early April, the situation came to a head when 75 dairy farmers in Wisconsin learned they’d lost their contracts to supply Greenland Dairy Products, a U.S company that exports $100 million ultra-filtered milk to Canada annually but was being forced to stop because of the low prices. A New York company made a similar announcement around the same time.

In a rare show of bipartisanship, a number of Democratic lawmakers, including Senators Bernie Sanders, Patrick Leahy, Chuck Schumer, and Kirsten Gillibrand joined their Republican counterparts over the last year to implore Canadian officials to back off from the new rules.

But the Canadians aren’t having it.

The Canadian ambassador to the U.S. David McNaughton pointed out in a letter to the governors of New York and Wisconsin that Canada’s dairy industry is actually “less protectionist than the U.S., which has employed technical barriers to keep Canadian dairy out of the U.S. market.”

Even Prime Minister Justin Trudeau waded into the fracas, reminding American dairy producers that they enjoy a 5 to 1 trade surplus with his country: “The U.S. has a $400 million dairy surplus with Canada, so it’s not Canada that’s the challenge here,” he said in an interview with Bloomberg.

What’s NAFTA Got to Do with It?

Trump’s oft-cited pledge to renegotiate the North American Free Trade Agreement – which he has called “the worst trade deal ever” – figures heavily in the brewing milk war. Numerous American politicians and dairy industry groups have argued that Canada is skirting its obligations under NAFTA to not impose regulations that restrict the free flow of goods across the border. But most trade experts on both sides of the border agree that that argument is a non-starter: NAFTA prohibits restrictive import taxes, but it doesn’t prevent policies deemed necessary to support domestic industries.

Canadian lawmakers assert that the policy changes regarding ultra-filtered milk were necessary to protect their own producers. Isn’t that to be expected? Why would Americans think that another country should bend the rules to favor imports over domestic products? Is a nation’s sovereignty over their own food supply not sacred?

The answers to these questions paint the American dairy industry as unabashedly selfish. In short, American dairies produce way more milk than the country needs, and they want other countries to buy it. For decades, American food policy has been designed to incentivize commodity farmers (including corn, soy, cotton, beef, dairy, and others) to produce more than they can sell domestically, based largely on the notion of America as the breadbasket of the world: if we can outcompete other countries in food production, the thinking goes, America’s prosperity will rise even higher.

The problem with this notion is that agricultural commodities are very sensitive to supply and demand dynamics. A drought in one place and a bumper crop in another can set off chain reactions in global markets that suddenly leave farmers with products that nobody wants to buy. This has been the case for past several years with American dairy products.

Last October, the U.S. dairy glut grew so great that farmers were forced to dump 43 million gallons of milk down the drain. Around the same time, the USDA offered to purchase $20 million worth of cheese to help “bail out” the dairy industry after revenue fell by 36 percent over a two-year period. Such surpluses help keep grocery store prices low, which Americans have come to expect, but they keep farmer incomes so low that taxpayers end up paying the difference anyways in the form of agricultural subsidies.

Why Canada Doesn’t Have a Glut

The Canadian government takes a different approach. Instead of subsidizing a perpetually high level of dairy production, they use a supply management system that endeavors to match production with consumer demand, thus reducing price volatility and ensuring a stable, livable income for Canadian dairy farmers. Canadian consumers pay a bit more for milk, but not exorbitantly so.

After Trump’s harsh remarks in April, the president of Canada’s National Farmer’s Union Jan Slomp had a bit of advice for the U.S. president, which he shared in an open letter posted on Twitter:

“We have compassion for American family farmers who are experiencing record low milk prices… In President Trump’s speech, he said he wasn’t just looking for answers, he is looking for a solution… [so] we decided to share with the President the principles of a system that will work for dairy farmers, rural communities, processors, workers, consumers, and governments… This solution [is called] supply management… When everyone tries to make up for low prices by producing more of a perishable product, it just makes the problem worse. The USA cannot solve its dairy crisis by taking over the Canadian dairy market and putting our farmers out of business. But if it adopts its own supply management system, it could begin to restore prosperity to rural America… Instead of exporting milk, we would be pleased to export this unique and successful dairy policy innovation.”

Industrial Dairy: The Elephant in the Room

Like Trump, Trudeau is not known for being agriculturally savvy, but he hit the nail on the head recently when defending his nation’s dairy policies: “[Americans] choose to subsidize to the tune of hundreds of millions, if not billions of dollars, their agricultural industries, including their dairy.” Those subsidies not only encourage excess production, they encourage consolidation in agriculture.

And as Mother Jones recently pointed out, the “boom-and-bust cycles” that are inherent in the U.S. subsidy system “driv[e] small farms out of business… forcing survivors to scale up. As recently as 1950, around 3.5 million US farms kept dairy cows; by 2012, that number had dwindled to 58,000, even as overall production surged. The shakeout continues.” Indeed, industrial-scale agriculture has methodically replaced small family farms since agricultural subsidies were first introduced in the 1930s.

Another downside to overproduction: wasted resources. The 43 million gallons of milk dumped down the drain last year required a lot of water, fertilizer, feed, and land to produce. Meanwhile, many Americans don’t know where their next meal is going to come from. And fruits and vegetables, which are not subsidized by the government, cost more than low income families can afford to pay, steering them toward less healthy food choices. Something is not right in that equation.

No one wants to see a farmer go bankrupt, but instead of blaming Canada, perhaps it’s time to take a look in the mirror. Instead of subsidizing milk production to the point that farmers are swimming in it, yet unable to pay their bills, why not offer incentives for diversification and local, direct-to-consumer markets for farmers? A farmer with a small dairy herd as part of a larger mixed operation of vegetables, fruits, grains, and other livestock is much more resilient to price fluctuations – and likely much gentler on the land – than one with 10,000 cows and nowhere to sell their milk.

My great-grandfather had a large farm in North Louisiana near the Arkansas border. His youngest son ran a dairy farm on his share of the ancestral acres, as did many of his siblings and cousins. Dairy farming ceased to pay. Grandfather became a pest control operator, working from the farm. Daddy became a builder and planted pines for pulpwood. That market is gone. Market for wholesale farming of chickens is gone. My brother lives on the place and watches it return to wilderness while he, his wife, and his children work out of town, or out of state.

There is so much that the typical America citizen does not know about our argriculture. Information, as long as it is fact based and not politically motivated, is so important. Thanks for the article and information.