Bonus points if your OKCupid profile pic is just a dirty radish. 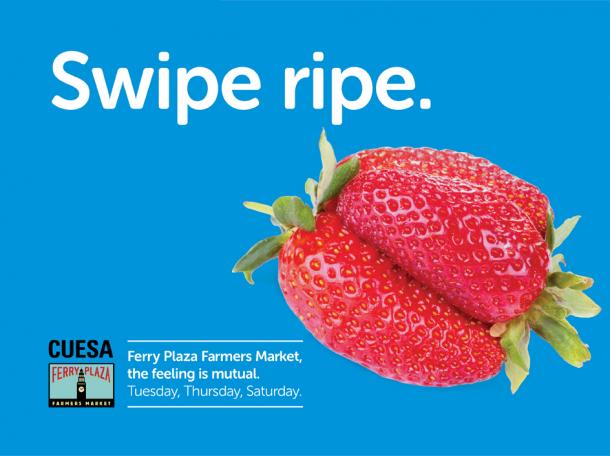 CUESA (the Center for Urban Education about Sustainable Agriculture) is trying something new – or very old, depending on how you look at it. The nonprofit operates farmers markets and hosts educational programming in the San Francisco Bay Area. It’s probably best known for operating the Ferry Plaza Farmers Market in San Francisco, one of the biggest in the country. And its new ad campaign, running on San Francisco’s buses since May, are making a splash.

“We were playing around with wanting to highlight all those vegetables but also thinking about the farmers market as a counterpoint to industrial food systems and waste,” says Marcy Coburn, CUESA’s executive director. Industrial produce has the gift of consistency, but tends to lack the powerful colors and unique shapes of produce grown in smaller batches, so CUESA decided to embrace the irregularity rather than run away from it.

The ads showcase a single “irregular” item – an eggplant with a protruding bulge, two carrots that have somehow intertwined, a strawberry that seems to be two strawberries smushed together – with a brief tagline referencing online dating, or sex, or both. “We’re in the heart of Silicon Valley, and dating apps are extremely popular, and a lot of that technology is based here, so it’s a tongue-in-cheek joke,” says Coburn. The apps reference Tinder (“swipe ripe”), Craigslist (“casual encounters”), and the renowned phallic usage of the eggplant emoji (“eggplant envy”).

CUESA’s press release for the campaign stresses the importance of so-called “ugly produce,” meaning irregular or slightly damaged produce that most of the American public tends to ignore – and which thus ends up in landfills, to the tune of almost half of all produce. It’s a bit of a stretch to get all of that information from the ads, but that’s not really their job: Coburn says CUESA’s speaking engagements and educational outreach can handle the more nuanced elements of ugly produce. In the meantime, the message is clear: These are funny and slightly inappropriate fruits and vegetables, and can be found only at the farmers market.