The United States Grows Massive Amounts Of Soy. So Why Is Our Edamame Imported? - Modern Farmer
Food & Drink, Plants

The United States Grows Massive Amounts Of Soy. So Why Is Our Edamame Imported?

We just want to eat local edamame. Is that so much to ask? 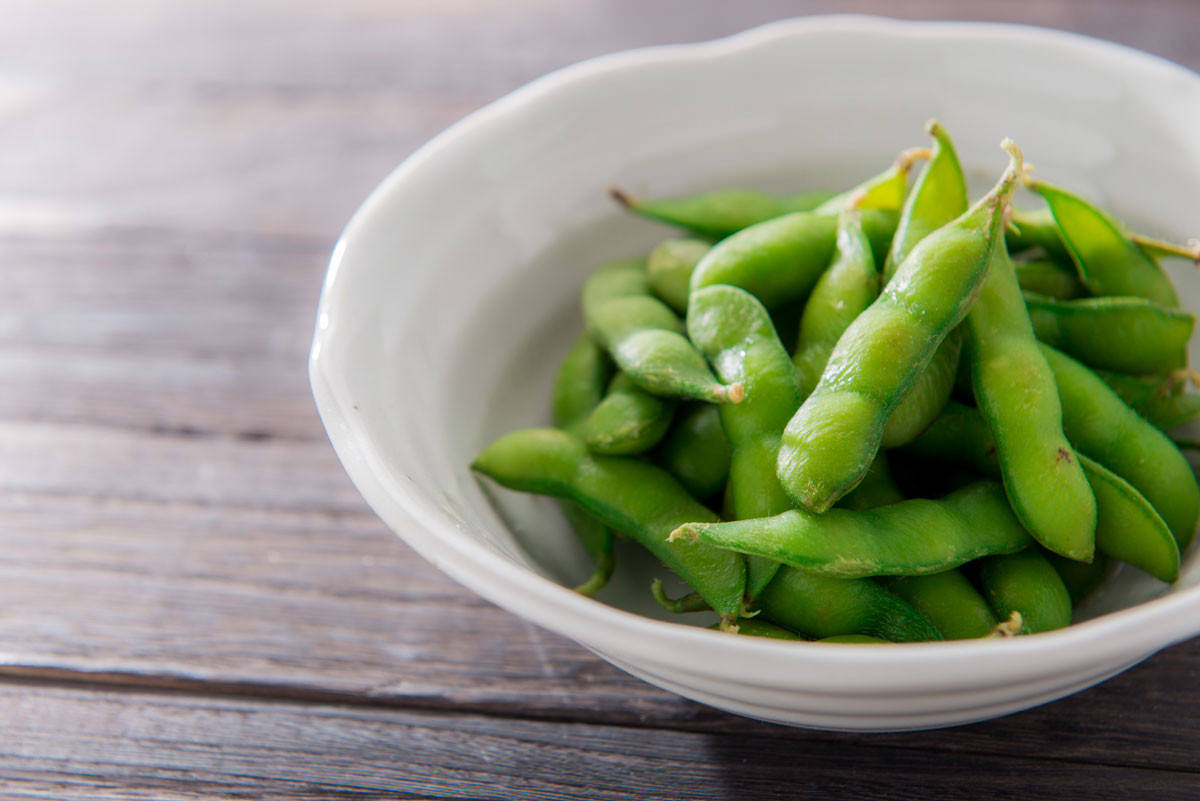 Soy is the second-biggest crop in the US, just after corn. We grow $40 billion worth of soybeans in this country every year. But we eat hardly any of that, at least not directly: The vast majority of domestic soybeans are processed into oil and soy protein. A whopping 98 percent of domestic soybean production goes to animal feed, with the remainder largely focused on soy oil, which is used sometimes in edible oils (like margarine) and sometimes in industry.

The common foods made from soy, including tofu, soymilk, and edamame, are almost all made from imported soybeans, despite the fact that we have absurd amounts of soy right here. Why?

First off, we have to talk about the different types of soy. All soy is the same species, Glycine max, but there are dozens of different breeds with different uses, and in fact, harvesting the plant at different ages gives a totally different product. American soy, the kind that ends up in animal feed, is mature, allowed to grow to its adult stage. At that point the pods are hard and water-resistant, and the beans are basically dried and hard, which makes them cheaper and easier to process into oil and soymeal for animal feed. While soymilk (and tofu, which is made from soymilk) is made from rehydrated and pulverized mature beans, edamame is made from the young, tender, green beans. And we mostly just don’t bother harvesting immature beans here.

Within the past few years, certain places in the US have begun producing edamame on a higher scale. Arkansas has emerged as the first and leading producer of domestic edamame; Arkansan growers eventually want edamame to be as associated with their home state as apples in New York (or Minnesota, or Washington – but look, we’re from New York and we will vouch for our state’s apples) or corn in Iowa. It’s not just a lark; edamame, in the right climate, is very easy to grow and incredibly healthful.

On the other hand, those Arkansans still represent a very minor movement. A new study from the University of Illinois tries to figure out the solution to one possible obstacle in growing more edamame here. Edamame is the same species as the soybeans grown elsewhere in the country, but specific breeds are grown to produce the most tender, best-tasting immature beans, and American farmers have basically no experience with those. That means farmers have little experience figuring out some of the problems that have long been ironed out with other soybean varieties.

“Vegetable processors identify weed interference as a major limitation to domestic edamame production on a commercial scale,” writes a University of Illinois crop scientist in the study’s release. But there’s very little data on exactly how much difference there is between weed vulnerability to edamame and to other kinds of soy. At long last, this study tried normal kinds of herbicides on a few kinds of edamame plants to figure out whether they worked, and which kind of edamame grows best with which herbicide. Sounds really basic, but nobody had bothered to do that before.

The findings won’t mean much to anyone who isn’t invested in soybean growing (for the record, the study found that the variety Gardensoy 43 coupled with “S-metolachlor with a follow-up application of imazamox” herbicides had the best results), but could mean a lot to potential edamame farmers. Those Arkansas farmers estimate that soon enough, edamame could be a $200 million a year crop in the US – and now farmers have some more information to go out and grow it.

What if you only want to eat organic and do not want pesticides?

Aren’t there other countries besides Mexico & China that farmers could trade with that aren’t effected by the tarrifs?

…(for the record, the study found that the variety Gardensoy 43 coupled with “S-metolachlor with a follow-up application of imazamox” herbicides had the best results)… No wonder they taste so good!

Believe there is evidence that ingestion of soy lowers testosterone in males, among other issues, so why is almost everything on the American market shelves has the addition of soy oil. Please do not fill my email with argument, just check out the ingredients on the products you buy at the supermarket.

Hello Dan and All, I grew up in Indiana and I have REALLY been mulling over this question as, on ONE hand, corn, and on the other, Soy, were ubiquitous of the fields in every direction in which my early life experience could take me! Please bear with me, but I have been doing so–mulling this inexplicable absence of directly accessible whole and ready-to-eat soybeans–in the context of my passion for our broken “Food” Policy in general. I am a Licensed Clinical Social Worker, an Education and Biology double major with a minor in Chemistry, and an artist (painter and… Read more »