Tangerines have gone from overlooked oddity to overnight success story, thanks to seedless varieties and savvy marketing. Now if they could all just get along. 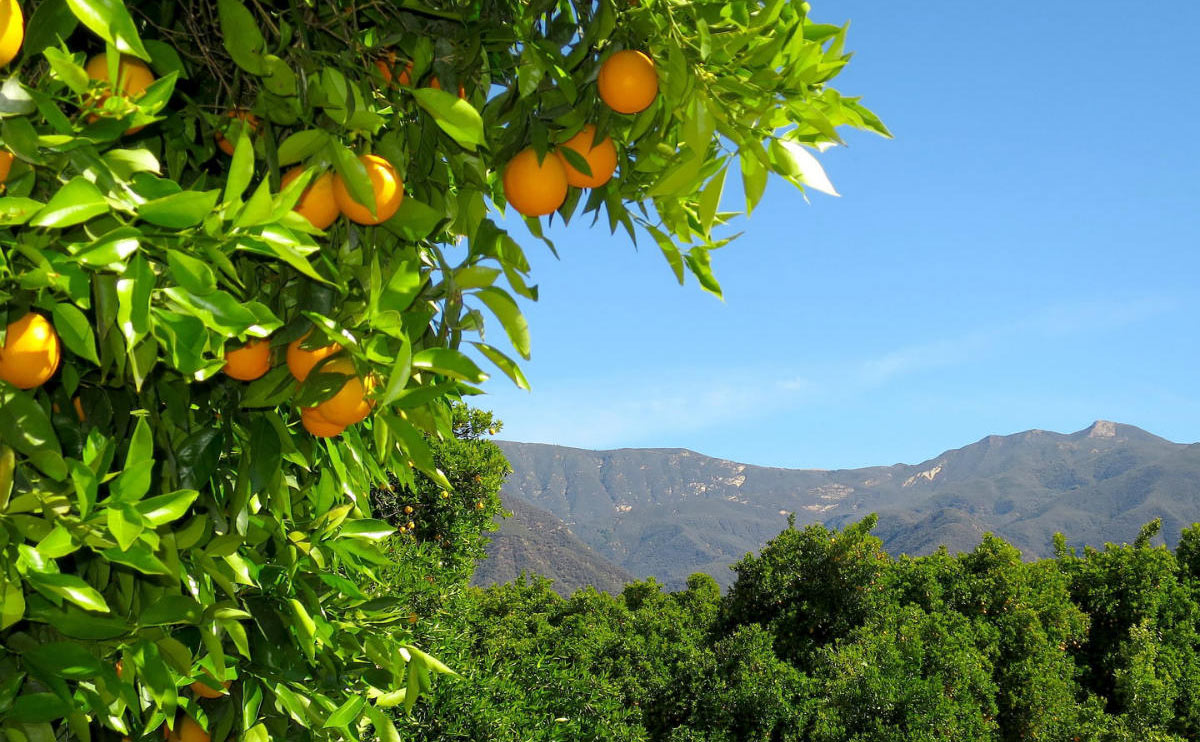 “My grandfather started growing tangerines here back in the ’20s. But it was just a niche market in those days,” she explains. “Customers mostly wanted oranges instead. Oranges were dominant in the 20th century.” More segments passed around. More happy groaning. “But these days people are tired of oranges. Tangerines have arrived.”

She’s not kidding. Between 2000 and 2012, tangerine groves in California skyrocketed from 8,800 acres to 38,000 acres, while over the same timespan orange groves slipped from 199,000 acres down to 177,000. That’s an astonishingly swift reversal of fortunes in the nation’s leading tangerine-growing state.

This preference cascade toward tangerines didn’t happen by accident. It took concerted marketing campaigns from business-savvy citrus farmers who brought a new idea to the world of tangerines: product branding.

For over a century in the U.S., tangerines were mostly ignored, seen merely as smaller, seedier cousins to the ubiquitous orange.

It’s pure economics: A 2005 study revealed that customers would be willing to pay up to four times as much for a seedless tangerine as they would for one of the old-fashioned seedy varieties. So tangerine growers gave shoppers what they wanted: new seedless varieties have created a 21st-century tangerine gold rush.

Those damn seeds were the problem. The natural plethora of seeds in most varieties made tangerines more problematic than the seedless and effortless navel orange. Citrus researchers have been hard at work for decades in a quest for seedlessness.

It’s not that farmers have an eccentric personal phobia of seeds. It’s pure economics: A 2005 study revealed that customers would be willing to pay up to four times as much for a seedless tangerine as they would for one of the old-fashioned seedy varieties. So tangerine growers gave shoppers what they wanted: New seedless varieties have created a 21st-century tangerine gold rush. An acre of seedless mandarins is now much more profitable than an acre of any other citrus.

But dethroning Big Orange took something more: an awareness of how customers behave.

“The concept of ‘branding’ tangerines was pioneered by Tom Mullholland,” says Ayala.

Mullholland is a Central Valley citrus farmer who in the early ’90s stumbled across an outlandishly sweet type of easy-to-peel tangerine that was nonetheless seedless – the holy grail for tangerine growers. He learned to his amazement that the variety was grown only in Morocco, but would soon become available in California. So he fatefully decided to devote his entire farm to this new miracle citrus. But there was one problem: The tastebud-friendly fruit already had an ungainly official name “W. Murcott Afourer” – a marketer’s nightmare. Solution: Just ignore the official name. Mulholland trademarked the brand name “Delite” and bestowed it on his crops. Immediately customers began snapping up the easy-to-eat (and pronounce) “Delites.” So he planted more acres, and then extended the growing season by planting other seedless mandarin varieties which he also called “Delites,” eventually making the brand a reliable year-round product.

It’s not clear whether most customers even noticed that the contents of the box changed from month to month. It didn’t matter. Mulholland had proven that “brand loyalty” – the American consumers’ tendency to swear allegiance to a corporate logo – worked even with a natural product such as fruit, and even when you switched fruits.

Success breeds imitators. And so the big boys moved in.

Two large corporate-style citrus firms, Sun-Pacific and Paramount Citrus, joined forces and emulated the Mulholland strategy. With much more Central Valley acreage to play with, they started planting vast clementine groves in 1997, followed shortly afterward by W. Murcott Afourers, and in 2001 trademarked their shape-shifting product – which was actually the exact same product Mulholland was already selling – as “Cuties.”

Cuties were aggressively marketed nationwide, and consumers fell in love with the (what else?) cute logo. Delites still hold ten percent of the tangerine market, but since Cuties first hit the shelves of big box retailers in 2004 they have become dominant, a household word.

Customer confusion over terminology may have contributed to the variety’s long-term also-ran status compared to oranges. What, after all, is the proper name for these sweet little citruses? Tangerines? Mandarins? Or perhaps clementines?

Technically, all of these fruits are indeed “mandarins,” which is their official botanical nomenclature. “Tangerines” do not exist, scientifically speaking. But popular vernacular trumps science every time, and for nearly two centuries the term “tangerine” – a word derived from the Moroccan port Tangiers, from whence the fruit was first exported to England – has been the default name in common speech. But branding the fruit with a new moniker seems to have rendered the question moot. No more confusion: they’re just Cuties.

After a contentious two-decade partnership, Paramount Citrus parted ways last year with Sun-Pacific and its maverick owner Berne Evans III, who retained the Cuties brand name. (Paramount kept half the orchards and has since launched a rival new tangerine brand, “Wonderful Halos.”) Evans has been unable to grow enough tangerines to satiate the national yearning for Cuties, so he’s been signing up independent citrus growers to join the Cuties label and leave the marketing to him.

After the corporate divorce, Evans’ volume was cut nearly in half, but he doesn’t merely want to get back up to 100 million boxes – he’s playing the long game and is looking to make tangerines America’s default fruit.

As Evans recently told The Packer, a citrus industry newsletter, “Last year we sold about 100 million 5-pound boxes [of Cuties]. It’s going to be a billion-dollar industry before it’s over, probably bigger than the navel orange industry.”

Down in Ojai’s citrus country, things are more low-key. Ayala’s family-run “Friend’s Ranches” along with Jim Churchill and Lisa Brenneis of nearby Churchill Orchards pioneered a different seedless tangerine, the Pixie, which seems to thrive in Ojai and nowhere else. They teamed with 40 other small tangerine farmers to form the Ojai Pixie Growers Association, a farming cooperative that’s so laid-back “we don’t even have contracts – it’s all done with a handshake,” Ayala says, laughing. “We all combine our crop and market them as Ojai Pixies. That’s our brand: We always say ‘Ojai’ in front of ‘Pixies.'”

Unlike other tangerine growers, Pixie farmers didn’t have to devise and trademark a cutesy brand name, because “Pixie” was already the official botanical title for this unique variety.

“When they’re fully ripe, Pixies have the lowest acid of any commercially grown citrus in the United States,” notes Ayala.

That makes Pixies especially popular with young children whose palates can’t yet handle the stinging tang of most citrus. But they’re also sought out by connoisseurs who cherish the unusual.

Renowned not as a farming area but instead as a health resort and alleged spiritual vortex, Ojai recently launched what is probably the world’s only tangerine-themed agritourism campaign. During Pixie season (sorry, you’ll have to wait until next April), visitors can take guided tours of tangerine orchards, get Pixie body scrubs, and taste tangerine recipes at local bistros. It’s all part of the branding strategy, positioning Ojai Pixies as the tangerine for the cognoscenti.

As much as we want face-time with the growers themselves at farmer’s markets and farm-to-table restaurants, selling directly to consumers and individual businesses is hard work for them – and it’s not the soil-and-sunshine type of work that produces actual food. “It takes a huge amount of time and effort to retail the fruit yourself,” says Ayala, who sells as much as she can through mail order and one-on-one customer interactions, and only the remainder to a local wholesaler. “I can’t deny that I’m tempted to just sell our entire crop wholesale to some big outfit; I could finally take a vacation.”

“I don’t subscribe to the Hayride Theory of small farming,” insists Lisa Brenneis. She might seem at first the poster child for California’s hipster locavore foodie scene: She grows rare and exotic fruit, sells it herself at farmers’ markets, is part of an agricultural cooperative, and along with her husband bootstrapped their small farm to sustainable success. But she laughs at those who think modern farming should be some kind of historical re-enactment to entertain urban connoisseurs.

“The word ‘hayride’ is just my shorthand for the contemporary fad of people turning farmers into pets. In order to look cool, we’re supposed to pretend we’re still in the 19th century. You can’t survive that way; I’m a 21st-century farmer. Access to distribution, shipping, markets – it’s essential for small farms like us.”

Citrus farmers may have accidentally solved the conundrum of how to wean youngsters off factory-made snacks: Don’t mention that tangerines are healthier than candy.

Thanks largely to the marketing and branding of Cuties, Delites, Pixies, and other contenders like Sweethearts, Smiles, Sumos, Sweet2Eat, Clem’N Tina’s and Bee Sweet, tangerines have been trending ever upward since the ’90s.

Tangerine farmers may succeed where decades of government nagging have failed: improving the diet of the American child. For years the FDA has tried to cajole kids to cut back on processed junk foods. Didn’t work. Obesity rates rose as children continued to gobble candy and soda. Yet citrus farmers may have accidentally solved the conundrum of how to wean youngsters off factory-made snacks: Don’t mention that tangerines are healthier than candy. Simply convince the kids that tangerines are more delicious than candy. In 2013, consumption of California tangerines topped one billion pounds for the first year ever, more than dectupling the mere 100 million pounds eaten in 2000.

The slogan for Cuties’ 2011 national advertising roll-out was “Kids love Cuties. Because Cuties are made for kids.” The marketing director at the time, Mark Seguin, told The Shelby Report, a food industry publication, that “We know how much parents love sharing Cuties Clementines with their kids on the West Coast and we are excited to now offer this popular fruit to families across the country.” One glance at the new official Facebook photo stream for Cuties reveals precisely where marketing efforts are targeted: Every single picture shows smiling children and Cuties, a campaign that’s aimed not just at the kids but their parents who do the buying.

There are as yet no official stats about what age group is eating that one billion pounds of tangerines, but the anecdotal evidence suggests many are youngsters.

love this!! was wondering abt cuties