A geneticist heads south of the equator to find chickens that can survive climate change. 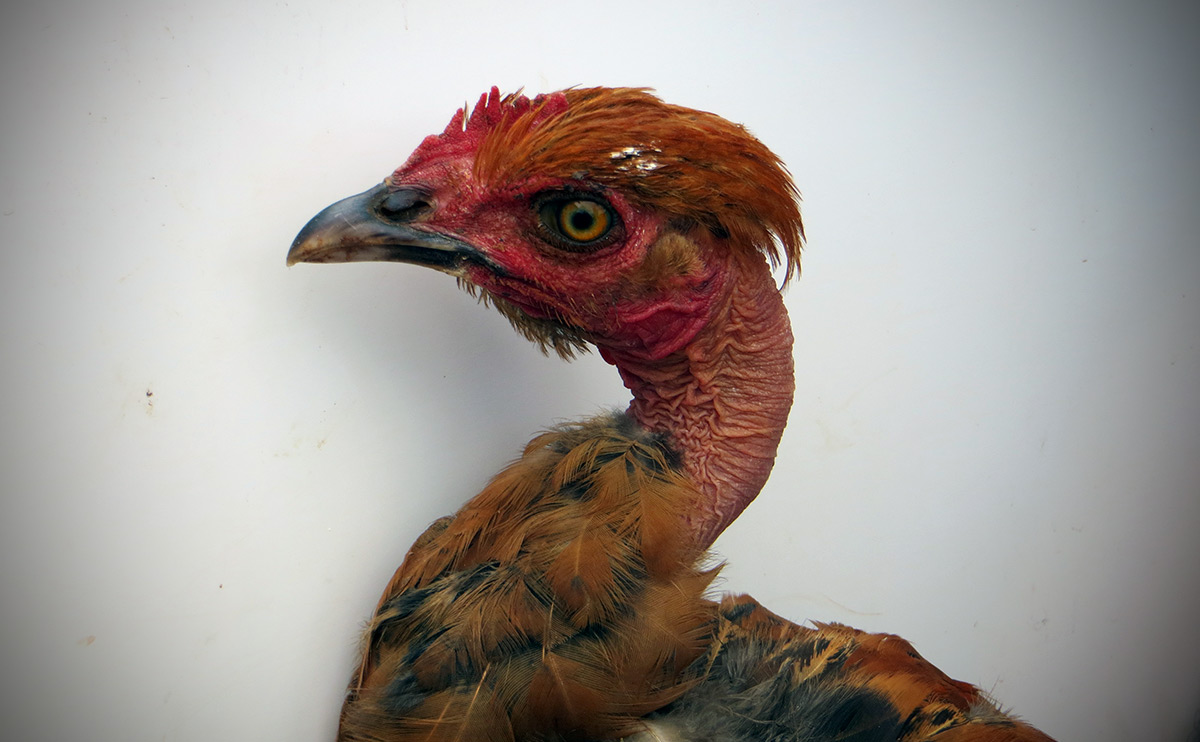 That’s the theory behind the work of geneticist Carl Schmidt and his team at the University of Delaware, where for the past three years the group of scientists has been busy mapping birds’ genetic code with one goal in mind: figuring out how to breed heat-resistant chickens.

Getting rid of feathers would help.

Schmidt’s team, in collaboration with researchers from Iowa State University and North Carolina State University, traveled to both Uganda and Brazil to study birds with featherless necks and heads, an adaptation that allows the south-of-the-equator poultry to throw off additional body heat and stay cool in their scorching native climes. By decoding the bald chickens’ DNA, Schmidt and his colleagues hope to someday have the information needed to crossbreed the bareheaded birds with U.S. poultry, creating a chicken that’s better able to adapt to the warmer American climate of the near future.

By decoding the bald chickens’ DNA, Schmidt and his colleagues hope to someday have the information needed to crossbreed the bareheaded birds with U.S. poultry, creating a chicken that’s better able to adapt to the warmer American climate of the near future.

“We’re going to be seeing heat waves that are both hotter and longer,” Schmidt said. “And we need to learn how to mitigate the effect of climate change on animals – we need to figure out how to help them adapt to it.”

As the planet warms, farmers that raise both meat chickens and egg layers will soon have to deal with the crippling effects of heat stress, and might find the traditional North American breeds – birds like Jersey Giants and Rhode Island Reds – newly susceptible to complications such as higher mortality rates, lower appetite and an increased risk of disease. And with demand for chicken on the rise – in 2015, the Food and Agriculture Organization projects, global production of poultry will top 100 million tons per year and by 2030 will rise to 143 million tons – sick birds are simply not an option on a planet that’s already having trouble raising enough food for its population. 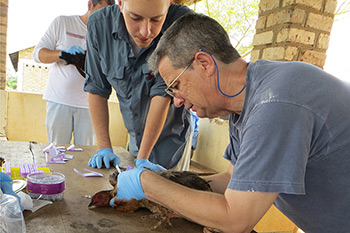 Schmidt samples the DNA of a chicken in Uganda.

“My concern is feeding nine billion people in 2050,” Schmidt said. “That’s going to be a challenge. And it’s going to be made worse if the climate does continue to change.”

In addition to sporting insta-cool featherless heads, the African and South American birds Schmidt is working with are an overall hardy lot whose resistance to other environmental stressors besides heat could also benefit American chickens.

“These are backyard flocks that are exposed to the elements – in Africa, you literally see chickens crossing the street,” Schmidt said. “These birds are under constant selection pressure. What we’re doing is isolating the genetic variants that have allowed them to survive.”

Schmidt’s team’s work is part of a five-year, $4.7 million climate change grant from the National Institute of Food and Agriculture. Three years into the project, the geneticists have gathered just about all the data they’ll need and will spend the next two years analyzing it: mapping the birds’ gene sequences in order to determine the best approach for getting those good, heat-resistant genes into American chickens without taking along all the genetic “baggage,” as Schmidt calls it, that’s unnecessary to duplicate in the hybrid chickens. And although the tools Schmidt’s team utilizes are modern, high-tech and very expensive, the mechanism for creating the heat-resistant birds will be a simple and age-old one: selective breeding.

“I want to make clear that we are not dealing with anything genetically modified here,” Schmidt said. “This is an approach that humans have taken for over 10,000 years.”

“I want to make clear that we are not dealing with anything genetically modified here. This is an approach that humans have taken for over 10,000 years.’

Any breeding of heat-resistant chickens that will take place in the future will be beyond the scope of the University of Delaware’s project, which is responsible only for the gene sequencing and data crunching. But in Schmidt’s projections, naked-necked birds would be bred with American production birds in successive generations, introducing heat-resistant adaptations gradually until, at about ten generations in, the new breed would be “done” and ready to reproduce all on its own. But the process is delicate – and won’t happen overnight.

“Doing this is going to take time,” Schmidt explained. “It could take two decades of research before resulting in any actual chickens.”

Not that the poultry industry – despite strong evidence that climate change is already underway – is in any rush to change things up.

“You talk to farmers today and they’re not concerned,” Schmidt said. “These people are thinking one flock, one generation at a time. But that’s the reason this kind of work needs to take place in an academic environment. Is it important for next year? Probably not. But is it important a decade or so down the line? Absolutely.”

we need to send lasagna to space. Lasagna is a very important staple in human history and culture. Like garfiled. The aliens would take the Lasagna and study the ingredients to make and to send a token of graditude and befriend us so then we can live in Harmony and we will like happily ever after. I want an article after this.

I would still like a aricle about my theory

I love eatung chicken so would this affect the taste?

Chris can you see me

Your mom likes my chicken…
hmmmm