Why Some Jews Don’t Feel Guilty About Eating Pork

While many observant Jews still refrain from eating pork, more and more cultural - and even practicing Jews - Jews freely indulge. What was once an illicit meat consumed with shame is now no longer treif (Yiddish for non-kosher) for these Jews, particularly ones who congregate at farmers' markets instead of synagogues come Saturday morning. 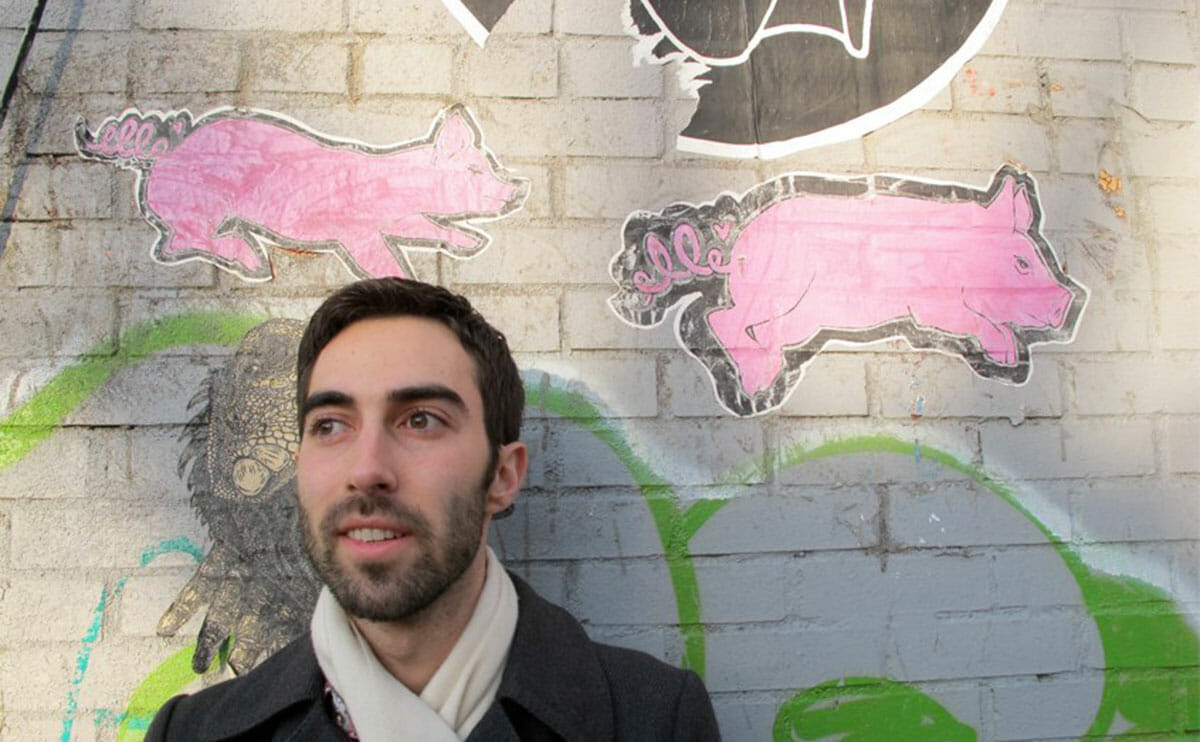 Today the writer and chef takes that love even further.

“I think milk-braised pork is just God’s food,” Adler says of her favorite preparation, a combination that at first glance seems “radically unkosher” to even a Jewish pork lover like Michael Pollan. “Pork is just such an ecologically and financially smart thing for us to eat,” she says. “It is the most generous of animals. You can use it all, and it is all good.”

Adler and Pollan act as standard-bearers for a growing tribe of progressive American — not to mention Israeli — Jews now unburdened by the ancient pork prohibition that so dogged their ancestors. While many observant Jews still refrain from eating pork, more and more cultural – and even practicing Jews – freely indulge. What was once an illicit meat consumed with shame is now no longer treif (Yiddish for non-kosher) for these Jews, particularly ones who congregate at farmers’ markets instead of synagogues come Saturday morning.

“It reflects a confidence in American Jewry today,” says writer Jeffrey Yoskowitz, aka the Semitic Swinologist behind the funny yet poignant Pork Memoirs. “There are formerly Orthodox Jews who get together for Treif Tuesdays as a way of affirming their Jewishness.”

A good reason to eat pork: the taste. But it’s not only gluttony that draws in these Jews. Many find pork to be the most sustainable and economical meat ”“ one that’s easy to raise on start-up farms that lack access to land and money for feed. For this tribe, consuming such virtuous pork co-exists with and even informs their inherent sense of Jewish values, particularly the social justice concept of tikkun olam. Even pork from animals free to root on small organic farms became preferable to certified-kosher for many, especially in the wake of a 2008 immigration raid that revealed abhorrent practices at the nation’s largest kosher beef slaughterhouse. (As the principle of kashrut gets reinterpreted through the lens of good stewardship, kosher-certified grass-fed beef, lamb and goat, and free-range chicken are increasingly available.)

“Is your food healing the world or harming it? If it heals, you’re keeping kosher, my kind of kosher,” chef David Levi, who features house lardo and capocollo on the menu of his new hyper-local Portland, Maine restaurant, wrote in a blog manifesto. “If it harms, you’re eating treif . . . Industrial food is never kosher.”

Pigs are by far the most efficient meat animal to husband year-round in New England, says nose-to-tail butcher and artist Jake Levin, who had a leftist, anti-religious Jewish upbringing in the Berkshires. Since pigs don’t chew the cud — the very characteristic that makes the otherwise cloven-hooved beast not kosher in Deuteronomy — they don’t require the acreage that herbivores like cows and sheep do. They’re also more cold-hardy than chickens, which must be housed indoors come winter. Finally, omnivorous pigs thrive on post-consumer food scraps and agricultural waste products — think rotting apples on an orchard or the whey generated by a dairy making cheese — a cheap and often free source of feed that only enhances the deliciousness of the resulting meat.

For Levin, in fact, an irreverent joke about the “kosher pork” he cut with other Jewish butchers at Fleisher’s Grassfed Meats in Kingston, N.Y., morphed into art. The process of creating this experimental documentary for a larger installation called the “Messianic Pig” ironically gave Levin newfound respect for the cultural, historical and spiritual reasons Jews still maintain the traditional dietary laws.

“It was this paradox of a kosher ham… a meat product that could never be kosher but was the ultimate example of well-raised, healthy and considered meat,” Levin said in a library talk on the project, which also includes Shabbos candles made of lard. “While I knew I would never keep kosher in a halachic sense [according to the religious law], I began to think of my own eating rules as a form of kosher.”

Adler still cautions against fetishizing a Jewish love of barbecue and bacon. Yet both she and writer Jeffrey Yoskowitz felt right at home giving talks at the Camp Bacon Zingerman’s Deli annually hosts in Ann Arbor (itself homage to co-founder Ari Weinzweig’s memories of Jewish summer camp). “As opposed to a slavish tribute or a desire-ridden bacchanal, it was a fun, earnest celebration of a really important food,” Adler says. Still, Yoskowitz makes a good case for why choosing pork should remain “a transgressive act” for those who self-identify as Jews. Or, as the late David Rakoff put it in his essay “Dark Meat”: “I almost never feel more Jewish than in that moment just before I am about to eat pork.”

So while many Jews may be redefining their relationship with kosher eating ”“ and especially pork ”“ there are of course plenty of forward-thinking ones still holding fast. That’s true for Yoskowitz, the grandson of Holocaust survivors, who worked on a pig farm in Israel after college in 2007 and is writing a book navigating the rise of an Israeli pork industry amid the persistence of the Jewish — and Muslim — taboo. (He can now find pork on the menu of all the fine-dining restaurants in Tel Aviv, where there was next to none just 20 years ago.) Even Reform Jews who grew up in ham-eating households are reconsidering their relationship with pork, sometimes choosing to abstain as adults, to renew their connection and commitment to Judaism.

So potato latkes fried in lard, “pigstrami” (pastrami-style pork belly) and bacon-wrapped matzo balls still aren’t your thing? No worries. Levin, for one, recommends trying a surprisingly ham-like “sham,” a brined and smoked leg of mutton. Dry-aged meat from mature sheep, he says, is his latest obsession — second only to pork.

Pork shoulder braised in milk with garlic, sage, and lemon

This signature dish appears near the end of Tamar Adler’s inspiring An Everlasting Meal: Cooking with Economy and Grace (Scribner, 2011). She writes: “This slow-cooked meat dish must be one of the most delicious things ever made from any of the ingredients in it. The cooked milk separates into golden curds, which look strange and taste divine.” After just trying the recipe, I concur.

The pork shoulder will probably come tied. Leave it tied for cooking. The day before you plan to cook it, salt the roast five times as heavily as you want. Heat the oven to 325 degrees. Heat a deep oven-safe pot, then add the olive oil and half the butter. When the butter stops foaming, add the pork and let it get brown on all sides. It can take up to 5 minutes per side. Remove the pork from the pan. Warm the garlic, savory, sage, bay leaf, and lemon zest in the remaining butter in the same pot for a few minutes. Return the pork to the pan, add 1½ cups milk, and bring to a boil. Reduce it to a simmer, partially cover, and put the pot in the oven. Check the pork every half hour, turning it occasionally.

As the milk evaporates, add more by the ladleful. As the pork cooks and the milk reduces, the milk will start to caramelize into golden curds. Let it cook for 4 to 5 hours until it is tender and the liquid is a golden tan, reduced juice.

Unimaginable amounts of fat will rise to the top of this while it cooks – there is fat in the pig and fat in the milk. Skim it off if you’re eating this immediately. If you’re cooking it ahead, cool the pork in the refrigerator covered with the layer of fat until the day you want to serve it, then remove the fat in pieces.

Reheat the pork at 300 degrees until warm. If the curds of milk aren’t richly brown, remove the pork and set it aside, then let the milk continue cooking over low heat on the stove, letting the curds caramelize further. Turn off the heat and return the pork to the pot.

To serve, cut the strings off the pork and slice it against the grain into thick pieces. Serve in its golden sauce on polenta or smashed or puréed vegetables. ”“Tamar Adler

But YHWH Himself said “do not eat the pig”, Leviticus 11:4&7. Who are you or any modern Jew to say this no longer applies?

Shame on the Jews that, disregard God’s law, and indulge in a forbidden meat; swine! It is definitely an unclean animal; no sweat glands; consumes EVERYTHING, including their own dead. Remember: If you love the world, you are an enemy of Jehovah God.

In embracing pork, these Jews are coming closer to realizing that the admonition of Jesus was true, that it is not that that goes in that corrupts, but it is what comes out of the mouth in words that corrupts. Then the Apostle Paul, under the direction of Jesus wrote what he did in Colossians 2 about judging a person for what he eats or drinks. Jews are ever coming closer to a knowledge that Jesus was indeed the Messiah and the Savior of mankind.