Two idealistic young urban farmers inspired a community and failed as a business. 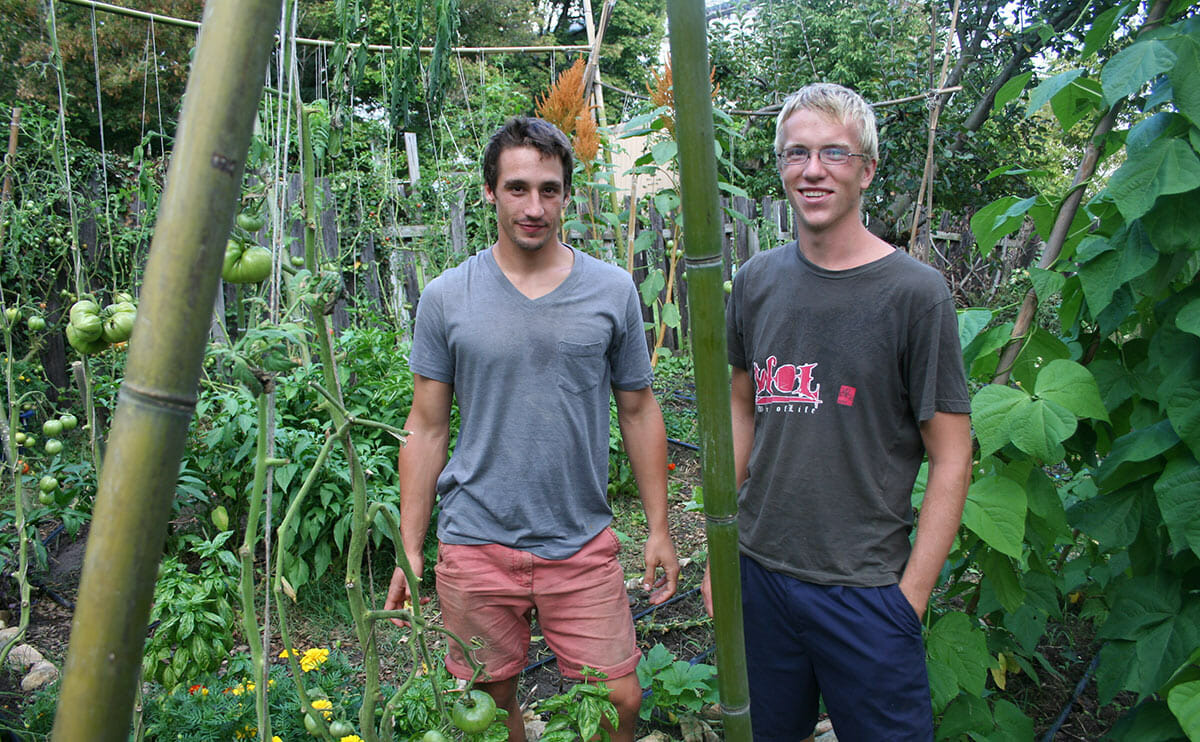 When their landlord OK’d the idea, they moved ahead full-throttle with their scheme. Before long, the bedraggled patch of grass out front erupted into a forest of sunflowers, kale, basil and melons. Around the side, their tomatoes went berserk on a regimen of vermicompost that Frere and Warren harvested from their worm colony in the basement. They had onions, carrots, pole beans, squash and much, much more, with big ambitions to match. The two had bonded as freshmen over an intense interest in innovative horticulture and planned to earn full-time livings farming less than a tenth of an acre.

Frere and Warren named their farm Collicello Gardens after their street (I live a few blocks down; I got to know them after the farm caught my attention and I started writing about it on my own blog). They began selling their produce through a CSA, and in their first year, got up to 11 customers. They also claimed confidently that, with succession planting, clever use of vertical space and other bio-intensive techniques, they’d be able to supply several dozen customers with weekly produce deliveries and be raking in a handsome amount of money.

When they applied for a business license, however, they hit a major speedbump. City ordinances, which often aspire to an antiseptic Leave it to Beaver-ish ideal for neighborhood life, prohibited farming. Their business license was denied, and Warren and Frere were informed that Collicello Gardens was an outlaw operation. (This occurred late in the summer, and to the city’s non-draconian credit, it didn’t try to prevent them from finishing out the CSA season.)

Through the following fall and winter, Frere and Warren channeled their energies into leading an effort to change that problematic section of city code. Proposals were drafted, public hearings were held, amended proposals were re-drafted, more hearings were held, Frere and Warren appeared repeatedly before the city’s rule-makers to plead their case. While a few opponents came forward to defend white picket fences and emerald lawns, many more folks in town, myself included, spoke up and signed petitions in their support. In March, a new ordinance was approved that legalized plant farming (livestock are still forbidden) in Harrisonburg, to the delight of many in a city that’s developed a thriving local food scene in recent years.

“Enacting change is possible,” remarked Warren, brimming with the irrepressible optimism of a college senior who’d fought the law and won, immediately after the vote.

This past spring, Frere and Warren hit the ground running, with a reworked plot layout that made their micro-farm even more efficient. They crunched the numbers and figured that with 30 customers paying $95 a month, or $350 for four months ”“ middle of the local CSA-cost pack ”“ they’d be set.

Though a cold, snowy spring put their production schedule several weeks behind, a flurry of early signups got their hopes soaring. A dozen customers were soon on board, raining down a lot of cash on the Collicello gardeners. In May, they quit the jobs they’d held through the winter and began farming their yard full-time.

“It felt really good. It felt right. We thought we were going to get more customers,” says Warren.

From a production standpoint, things continued to live up to the pair’s high expectations. When weekly deliveries began in June, the farm was yielding plenty to fill the 30 shares they were shooting for. Trouble was brewing, though, in a stagnating customer base. After the quick, early run on CSA shares, they’d leveled off at around 15 customers.

On a post-college, shoestring farming budget, things can change quickly. A few grand all at once can send expectations and morale through the roof. But after a few subsequent weeks of approximately $0 revenue, the outlook begins to sour fast. Looking back on it all, Frere says they simply neglected the business and marketing bits of successful farming. But that’s hindsight. At the time, it just felt like Collicello Gardens entered a gradual, frustrating tailspin. In an attempt to cut their losses, they went to Plan B: selling their extra produce at the local farmers market. Business there was pretty slow too, especially at the beginning.

“We were loving what we were doing, but when [we weren’t] able to get the money coming in … it kind of killed our energy, motivation and drive,” says Frere.

The garden itself soon caught the blues. More pests, more weeds ”“ the kinds of things that can quickly get out of hand and are hard to rein back in. Their flagging confidence didn’t give Warren and Frere much inspiration to revitalize their promotional efforts, either.

By mid-July, they were both on the job hunt. They kept filling what CSA orders they had, and soldiered on at the weekly farmers market. Sales picked up somewhat as the summer wore on, but a sort of fundamental disenchantment had set in.

Warren began working at the local food co-op in mid-August. Later that month, Frere headed back home to eastern Virginia, where he got a job monitoring wells. Warren finished up the last few weeks of the CSA by himself, through the end of September, and that was that. Collicello Gardens’ two-year run as an urban CSA in Harrisonburg had sputtered out.

In a strict business sense, the whole affair might be called a failure, and Warren and Frere, who have both since graduated from college, admit they were disappointed that their stint as full-time urban farmers lasted just a few months. But neither of them focuses too much on that detail. There are plenty of other things to feel good about.

They changed the city’s laws to create opportunity for themselves and future urban farmers in Harrisonburg. And Collicello Gardens itself was a remarkable proof-of-concept of the sheer amount of produce that motivated and creative farmers can harvest off a tenth of an acre. Add in a bit more business savvy and who knows what could happen.

“The whole thing was worth more than being poor for a few months,” says Warren.

And that term “poor” only refers to their bank accounts. When it came to their fridge and pantry, Warren and Frere were kings for a summer. They ate to their hearts’ contents out of their own yard, and bartered their excess at the farmers market for all the eggs, meat, milk and whatever else struck their fancy.

They’re glad they did it and they’re glad it’s done. Warren’s still living in the same house and working at the food co-op. He’s been talking a bit with others in town who are considering their own attempts at urban farming ”“ something that’s possible thanks to Collicello Gardens’ pioneering effort. He’d like to get into some sort of horticultural consulting, maybe teach some gardening classes soon.

Frere is gearing up for the grad school application process ”“ landscape management or environmental forestry are the kinds of things he has in mind. He ends his Modern Farmer phone interview with an energetic tirade about things like restorative agriculture and bio-intensive perennial polyculture. That Collicello Gardens didn’t work out in the financial sense has done nothing at all to dampen their enthusiasm for these sorts of things. Hard-knock lessons are part of farming, and they’re looking to the next thing.