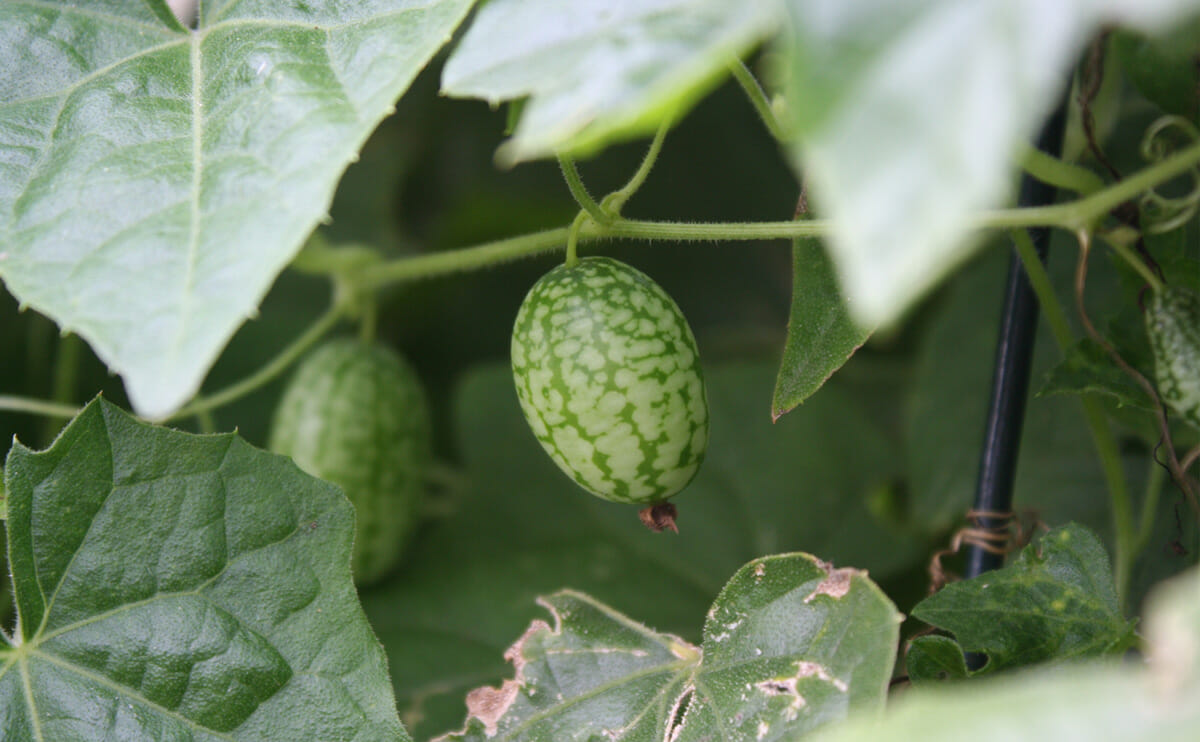 “We love them,” says Pete Klein, a farmer in South Haven, Michigan. “Some people know them, some don’t. I sell all that I grow.”

To confuse matters further, the sour gherkin has many names, including “cucamelon,” “mouse melon” and, in Spanish, “sandita” or “little watermelon.” (There’s even a gummy German candy called Saure Gurken.)

Cucumbers (both real and honorary) are such a large, diverse family of crops that, until lately, the Mexican sour gherkin has had trouble standing out. Hanno Schaefer, a curcubit expert and professor of plant biodiversity at Munich Technical University, for example, is unenthusiastic about Mexican sour gherkin. “It is a nice little plant with beautiful, small flowers, but it is a more or less typical,” he writes in an email. “It has yellow petals, insect pollinated flowers, fleshy fruits and a climbing habit, so there’s nothing very special about it.”

Given its odd appearance and elusive history, why is the Mexican sour gherkin popping up in foodie blogs and drink recipes by gardener-mixologist Amy Stewart? Because it is adorable, delicious, and easy to grow.

The sour gherkin has many names, including “cucamelon,” “mouse melon” and, in Spanish, “sandita” or “little watermelon.”

I have been growing the gherkin for five years. The first year, I planted it from seed. Every year since, it has self-seeded. The stems are thin and twiney, not at all like the awkward, hairy vines of conventional cucumbers. The fruit dangle under the leaves like bulbs on a Christmas tree. Because of its dark green stripes on a light background and diminutive size, I often introduce it as a “Barbie watermelon” during tours at the educational garden where I work. Recently, one young girl actually took a gherkin home to serve to Barbie herself.

The gherkin tastes even better than it looks, mildly and lemony, and is eaten without peeling. I’ve found salad recipes built around the gherkin. “Pickles are their primary use, but they’re great fresh and salted, too,” writes Jack Staub, the noted horticulturalist and author, in an email interview. “You could also sautee them briefly with oil and garlic and serve them as a vegetable.”

Moreover, Mexican sour gherkins are precisely the sort of niche product that’s impractical for Big Ag but essential to small and urban farmers.

“Financially, this crop does nothing for us,” explains Dave Dyrek of Leaning Shed Farm in Berrien Springs, Michigan. “But it draws interest. We look for crazy things to grow, and this is one of them. We sell to a lot of restaurants, and they go crazy for the gherkins.”

How much do you sell your gherkins per pound to the restaurants?

Are these cucumber seeds for sale? What are the advantages in maintenance and also how long does it take to harvest?