Lighter than a horse, swifter footed than a mule - in praise of a very fine beast of burden indeed. 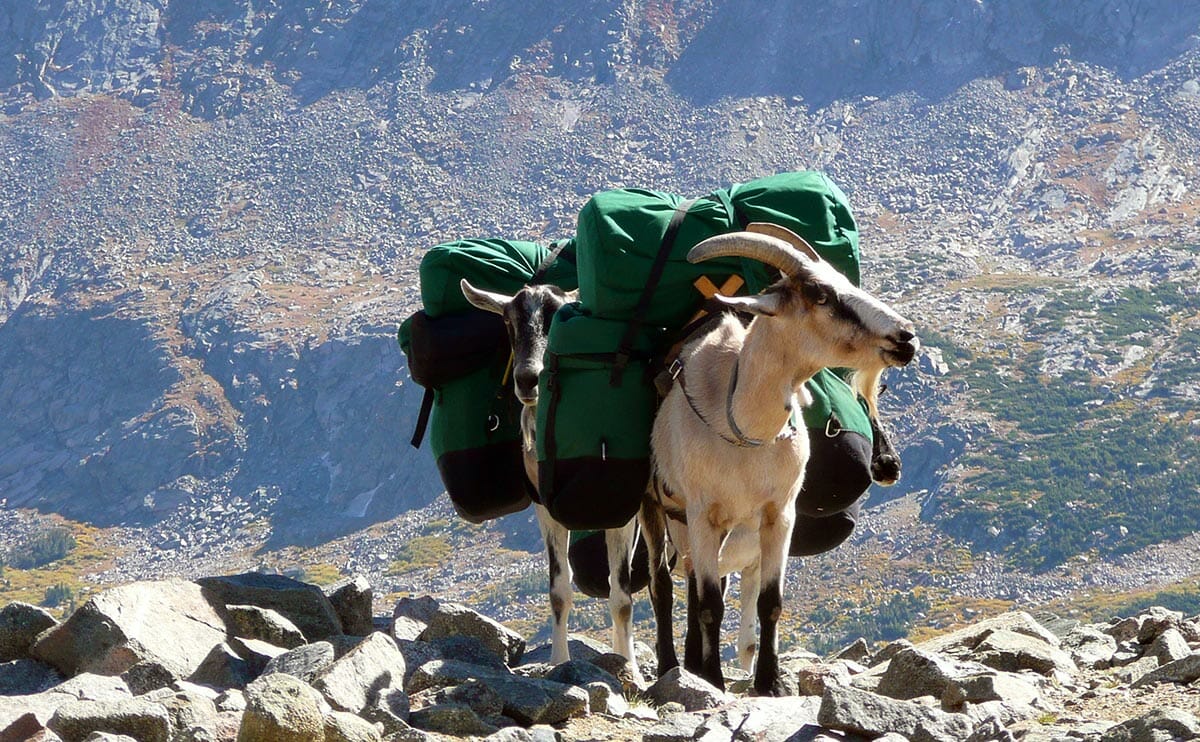 With packgoats you’re part of the herd, one of their own, an honorary goat.

Packgoats are made young – quite young. Get a baby goat, no more than four months old, one that’s imprinted on humans within 48 hours of birth. Then raise it, feed it goat milk from a bottle, keep it close and soon enough your goat will gaze upon you with its weird little slit-shaped pupils and see in you the Alpha Goat. You are now the leader of its goatherd. Congratulations, you have a packgoat.

Now, wait four years so the packgoat’s bones are fully developed before fitting it with a halter and panniers (that’s a pack), which will put you back about $200 to $300. A goat looks rather handsome dressed in a pack – at work but casual, unperturbed, like it was born to wear it. Which of course it wasn’t. See above.

Your packgoat will follow you everywhere, especially when you’re out on the trail. You will not be able to go to the bathroom alone. The only time you will sort of be alone is when you tuck in for the night and zip up your tent. Even then, you have to make sure you have tied up your packgoats close by, so that they can maybe hear you, or at least be aware of you, somehow. You’ll have to tie them up, too. Because if they aren’t aware of you, then the packgoats will panic and bleat and run away. Another important reason to keep packgoats close: They could get eaten by coyotes or (less likely) something bigger, like a mountain lion. As the Alpha Goat, you must protect your herd.

Do not overload your packgoats. Twenty to 25 percent of their body weight is suitable, which is plenty for a 180 pound goat. You aren’t using your packgoats to haul televisions! You are using them to lighten your backpacking load. There is no such thing as a movergoat.

You don’t have to carry food for your packgoats. You shouldn’t, in fact. They graze. The ideal diet for a packgoat, or really any goat, is, scientifically speaking here, “brushy stuff.” This is what Larry Robinson, president of the North American Packgoat Association (NAPgA) recommends. “They have a little of this and a little of that and smell a lot of plants and ignore ’em,” Larry says. “They do not eat everything. Contrary to the myth, they do not eat everything.” Things Larry’s packgoats will not eat in Larry’s garden: weeds. Things Larry’s packgoats will eat in Larry’s garden: his maple trees, and pretty much anything else he’d like to grow. Despite this, Larry loves his packgoats all the same. What packgoats, or any goat, will eat is individual to the goat. For example, Larry’s goats will not eat juniper, but Jeff Ross, a fellow packgoat enthusiast, says his goats just love juniper. 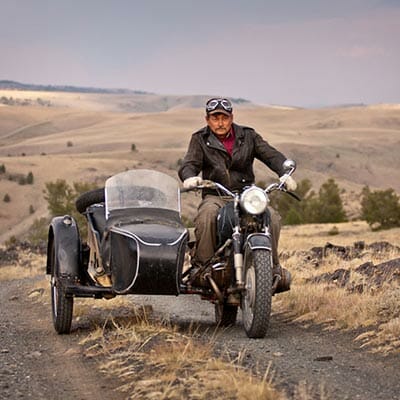 John Mionczynski on his motorocycle with sidecar, sans goat.

Larry traces the modern American enthusiasm for packgoats back to John Mionczynski, a wildlife biologist. Of course, goats have been used to carry things people needed carrying for millennia, but backpacking with goats – packgoating – likely begins with Mionczynski, who wrote a how-to called “The Pack Goat” in 1992. A decade earlier, he started a company called Wind River Pack Goats, hauling gear mostly for backcountry research trips and National Outdoor Leadership School courses. A decade before that, he claims to have had one of the more intimate and lengthy encounters with Bigfoot in recorded history. (Basically, Bigfoot tripped over Mionczynski’s tent and then threw pinecones at him from the darkness beyond his campsite.) Mionczynski also custom builds 1950s BMW motorcycles and, when he raised packgoats, drove his goats around in a sidecar to the cycle. He got his start on packgoats when he was in the field trying to follow bighorn sheep around, which are more cagey than you’d believe. This is ironic because bighorn sheep are the reason packgoating is now under attack.

The problem begins with the fact that bighorn sheep populations are way, way down to something like 10% of historical figures. This is probably because people hunted bighorns and still do. At the same time, human development means sheep have far less range than they used to. But also contributing is sickness, respiratory sickness in particular, which bighorn sheep maybe get from goats both domestic and wild — as well as from other sheep, both domestic and wild.

“We’re in a battle to stay alive here,” says Larry. “And goats are being specifically targeted.”

The problem is that if packgoats maybe get lost or escape or something, then they might infect the bighorn sheep. “If you’ve ever been around a sick goat,” Larry says, “they’ve got a lot of snot and stuff in their mouth and they’re flinging it around.”

But Larry doesn’t buy this. He doesn’t claim to be an expert in disease transmission, either. “What I do know is it’s real easy to lose a horse or a llama, but not goats,” he says. Plus, when he got to within about an eighth of a mile of some bighorns his goats got real nervous and started hopping around. “They were spooked, and stuck close to the Alpha Goat.” That’s Larry, he’s the Alpha Goat.

So Larry doesn’t think packgoats want to go after bighorn sheep. If any goat was going after bighorns, it would be wild mountain goats, which do tend to be more aggressive and push into sheep territory. Just a few years ago a man was gored to death in Olympic National Park. The mountain goat stood over his dead body and stared down onlookers. (We should likely amend our earlier statement, that any goat would make a good packgoat. Mountain goats would not make a good packgoats because they are wild and cannot be tamed.)

So the bighorn problem is a real problem for NAPgA and other goatpackers. National parks are canceling permits for packgoats, and national forests are too. The packgoaters aren’t taking this lying down, and plan to fight the closures and the claims that their goats are the reason for bighorns respiratory illnesses. But organizing is tough. NAPgA has about 100 members, and one packgoat equipment supplier has a national database of more than 2,000 people. As one lady once said to Larry, “getting goat-interested folks to sing from the same sheet of music is like trying to herd cats.”

The reason to fight is simple: what’s better than being on the trail with goats on your tail? Nothing.

The packgoats are low key, environmentally friendly and generally delightful. Larry has hiked about 1,000 miles with his goats, and only really started five years ago. That’s 200 miles a year, on average. Larry is 72. He also runs Goat Tracks magazine (“The Journal of the Working Goat”) and fields calls from those curious about packgoating all the time.

The thing he loves most about packgoats? How they just follow you everywhere. When he goes out in a group, even with just one other person, and someone falls behind, his goats will bleat at him, turn around, and try and get the person back. All goats are very concerned with keeping the group intact. With packgoats you’re part of the herd, one of their own, an honorary goat.

Popular
The Potential of Propolis for BeekeepersHolly Regan
Yes, the Government Really Does Stash Billions of Pounds of Cheese in...Emily Baron Cadloff
7 Smokable Plants You Can Grow That Aren’t MarijuanaBrian Barth
How to (Actually) Get Rid of Fruit FliesEmily Baron Cadloff
What to Do With an Abundance of PeppersShelby Vittek
Explore Modern Farmer
Related
Plants
Why You Should Grow Almonds and Thyme TogetherShea Swenson
Environment, Plants
Making the Case for IntercroppingShea Swenson
MTMF
Meet the Modern Farmer Helping Immigrant Farmers Sell Their ProduceBridget Shirvell
Animals, MTMF
Paddleboarding Goats Make a Splash on Prince Edward IslandNoah Lederman
wpDiscuz
We use cookies on our website to give you the most relevant experience by remembering your preferences and repeat visits. By clicking “Accept”, you consent to the use of ALL the cookies.
Cookie settings ACCEPT
Privacy & Cookies Policy