No, Goats Do Not Eat Tin Cans

There's an idea about goats that is firmly entrenched in the popular imagination: Goats will eat anything that isn't bolted down. They'll eat shoes, books, McRibs, even tin cans. Except, that's not really true at all. 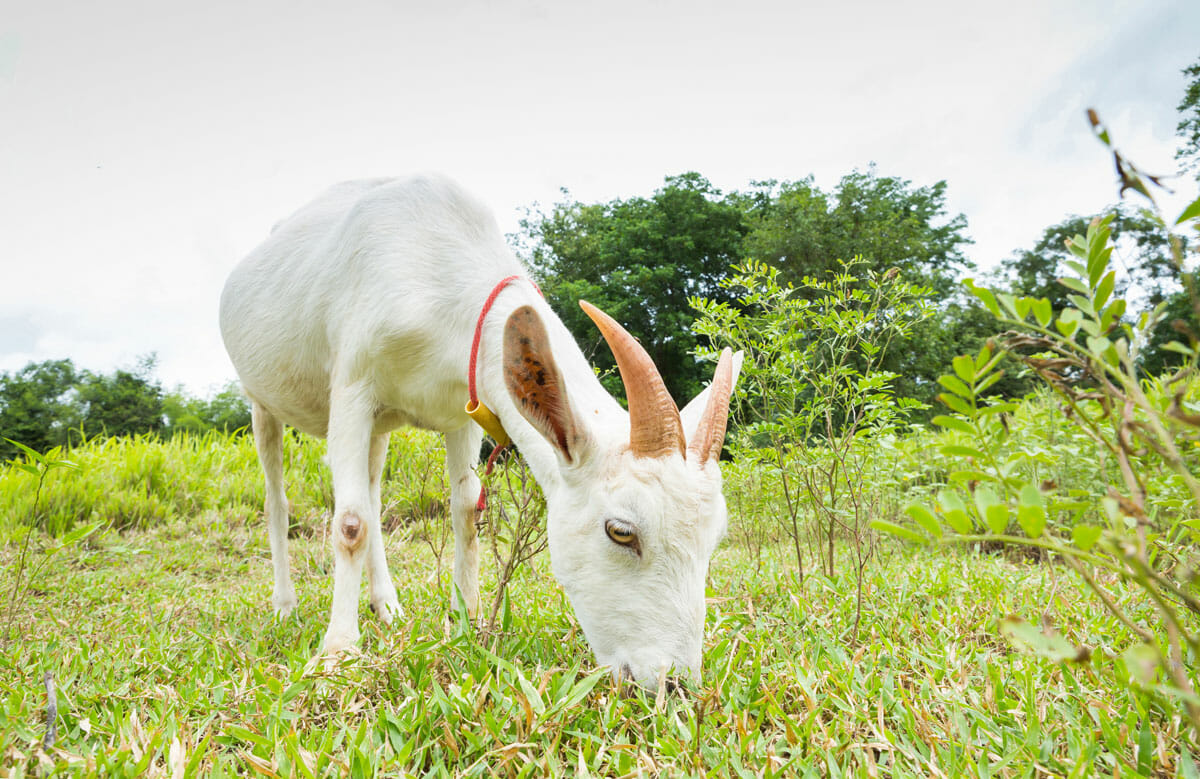 In some versions of the song, the goat gets out of this scrape. In many, he does not. Anger management issues aside, the song illustrates an idea about goats that is firmly entrenched in the popular imagination: Goats will eat anything that isn’t bolted down. They’ll eat shoes, books, McRibs, even tin cans.

Except, that’s not really true at all.

“They can’t eat a tin can or the shirt off your back,” says Sandra G. Solaiman, Affiliate Professor of Animal Nutrition at Auburn University. “They are very curious creatures. I’ve worked with sheep, I’ve worked with cattle, and what I realized is that with goats they are much more personable. They can be pets, they are curious. That’s why they get into everything.”

In fact, goats are actually extremely picky eaters who go after only the most nutritious options available to them.

“They are the survivors because they are very good at finding the most nutritious stuff,” Solaiman says, “They don’t eat tin cans but they will look inside a container and find something and get something out of it.” In other words, goats are resourceful when it comes to finding something to eat. “You’ll see cattle skeletons on the ground in the desert, but [goats] are running around.”

Solaiman says that goats are browsers who go after whatever in their environment will benefit them most. She’s seen them eat the bark off trees, because bark is a good source of tannin which supplies the goats with antioxidants to help ward off parasites and fungi.

One thing goats aren’t crazy about? Hay. While livestock like cattle can get by on the feed, goats need a more varied, nutrient-rich diet.

But what about when you wade into a goat pen and every mischievous little mouth is tugging at your shirt? Solaiman says this is just the curious nature of the goat. They do not want to eat your new Brooks Brothers, they’re just checking it out.

The FDA even addresses the myth of goat-with-a-trash-compactor-for-a-stomach in a primer covering the ins-and-outs of keeping goats as pets. In a section emphatically labeled “Goats Do Not Eat Tin Cans” they caution that goats “like small children have a propensity for mouthing or ‘tasting’ any new object they encounter.”

And to hear Solaiman expound on her research subjects is to believe that a bit of saliva on your sleeve is a small price to pay for keeping company with a goat.

“Goats are the most interesting, cutest, entertaining domesticated livestock,” she says. “They are characters.”

I have to disagree on nearly all of this article. My goats eat hay, plastic, roofi g shingles and plywood. When i say eaten, i mean digested it all!

Totally. My little goat family (mom and her 2 half grown babies) only really eat things a person would eat if they really had to (+ grasses and weeds). I’m talking FRESH peeling/cuts that have barely touched the ground. Aside from goat feed and grazing, the only things they eat would fall closer to a day old salad rather than the whole slop bucket + everything in sight they are “known” for.

Must be a lot of nutrition in old wooden fences then…
I’m not a professor of anything but I’ve owned a few goats! They are picky eaters when they have choices to pick from. Tin cans may be an exaggeration but they will eat some weird shit!

I’ve seen a goat eat a can with my own eyes, professor; it chewed it up and swallowed it down right in front of me…

Sure, it’s only anecdotal, but why tf would I lie about something like that!?

They ate the year sticker off of my father-in-law’s license plate – it would have resulted in a citation, but the officer laughed so hard he got away with a warning. DMV must be loading those stickers up with nutrients…