Will Hops Save This Family Farm? - Modern Farmer
Plants

Will Hops Save This Family Farm?

A fourth-generation family farm hopes that hops can help it survive. 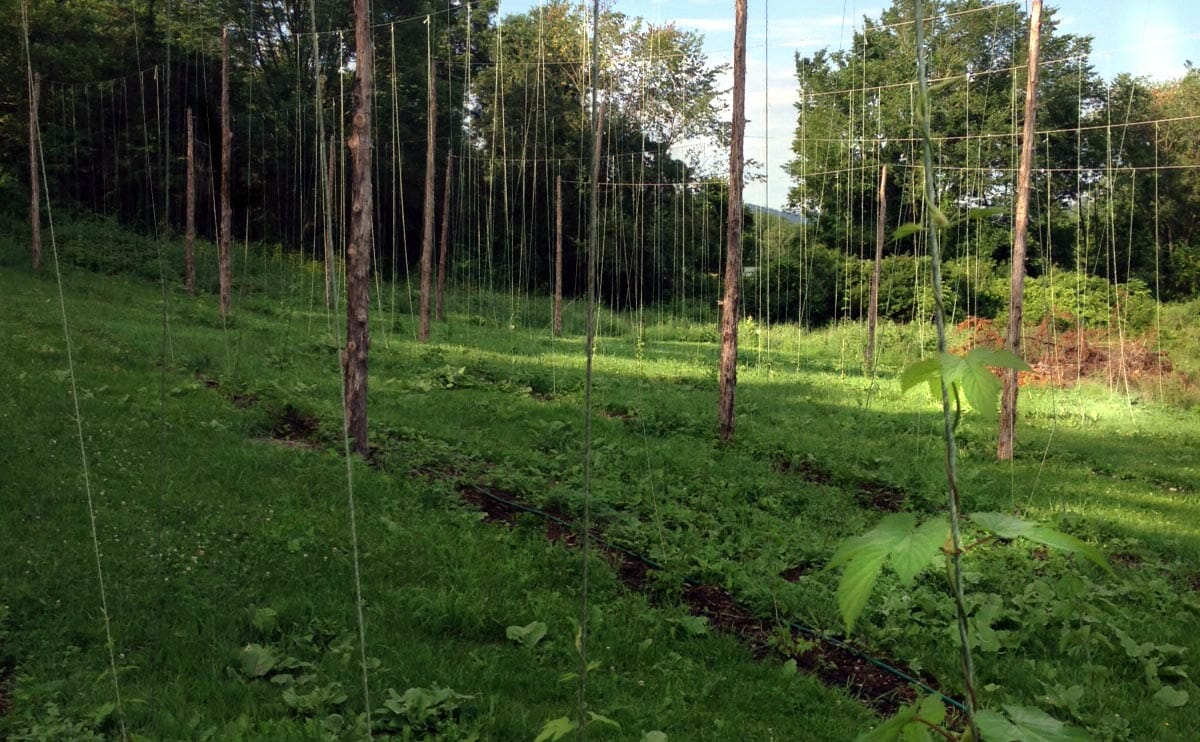 The 300 hop hills Erica Goodman planted on a half acre of her family’s farm are growing. They’re pushing up, twig-like through the dirt, climbing runners of twine attached to large wooden posts. Even though they’re only a few weeks old, these hops have gotten a lot of attention. They may even be enough to help save her family farm.

The 440-acre Goodmanor dairy farm in Fort Ann, New York, has been in the Goodman family for 160 years. These days, her oldest uncle runs it, and her dad, who is a teacher, and his two other brothers, who work at the local paper mill, help out part time. They’re ready to retire, and none of the current generation has taken up dairy farming. Like thousands of family-owned farms before them, the children decided to sell the farm.

Erica, who moved away from upstate and works for the American Farmland Trust, a farm conservation organization in Washington D.C. was devastated. She didn’t want to see the land divided and sold for condos, which seemed like the inevitable result, so she started looking at ways to keep the farm intact. The only problem? She needed a crop she could help farm from 450 miles away.

“I looked a long time at what would make sense, because I’m not there,” she says. “It’s not financially feasible to do something like vegetables or beef cattle, that you get rid of in the winter. The market was saturated, and it’s too time intensive.”

Hops seemed like the easiest, highest return crop. They’re hardy and they’re valuable – there’s a strong market for locally-grown hops. With some help from family and friends she could plant, then come back every few weeks to maintain the crop. She brought it up to her family, well aware that she was the one that hadn’t worked full-time on the farm, and was living in a city. She didn’t want to force the idea, but she wanted the option to try to keep the land.

“Working at the American Farmland Trust, I see that disconnect between different generations a lot,” she says. “I didn’t want to take away from what they’re doing.” Her uncles weren’t willing to compromise on their plans to retire, but they didn’t want to see the farm cut up either. So they gave her the go ahead to use a little bit of land for hops, and chipped in on the work and the fundraising.

With her family on board, Goodman launched an Indiegogo campaign to raise enough cash to buy the supplies, promising to send hops to people who donated. Facebook helped spread the word, and then the local news and NPR took notice. As the buzz grew, Goodman realized her farm’s story was enough to help.

“The funding campaign was really helpful to get the exposure. People have been asking what they can do to help,” she says.

With help from her dad and other family members and friends she planted a half-acre of Nugget and Centennial Hops in April. 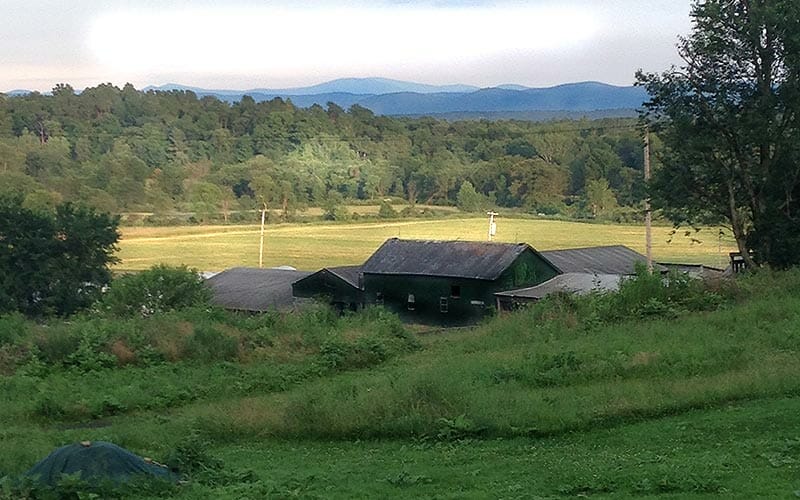 Goodmanor Farm, where an acre of hops now grows.

“From talking to breweries they recommended getting something with high alpha acid,” she says. “A lot of the big hop farms in the Northwest do a Cascade Hop that’s neutral, so ours is unique.” The smaller, more distinctive strains of hops are appealing to microbrewers because alpha acid contributes bitterness to beer – Nugget, a strain of hops developed in the ’80s is found in a lot of imperial IPAs. Alpha acids are unnecessary for, say, a Budweiser, but key to a flavorful pale ale.

Origin Hops, named after Origin White Goodman, the first person in the family to farm the land, are gaining steam. Adirondack Pub and Brewery in Lake George signed up to buy the crop, and Erica says currently they’re planning to purchase the wet hops for three times the going rate for dry hops.

She’s not the only one in New York who’s pushing hop production. Other famers in the area have switched to hops. According to Steve Miller, Cornell Cooperative Extension’s hops specialist, there are 130 acres of hops growing in New York this year, up from just 15 three years ago. Last October, at New York’s first Wine, Beer and Spirits Summit, Governor Cuomo announced legislation to bolster the state’s beer economy, including reforms that makes it easier for farm breweries to get permits. Locally, there are economic development groups trying to build infrastructure to support small growers. They’re looking into equipment like a community harvester or pelleter, both of which are prohibitively expensive for one small famer to buy, but would make the process scalable.

Meanwhile, Goodman and the Origin Hops crew is still doing everything by hand. This year, Goodman, her dad, and whoever else they can find to help will be harvesting 24 hours a day over the three-day window when the hops are ready. They’re not sure exactly who they’ll find to help, and next year, if and when they scale up production, those questions will be harder to answer. Erica is looking for jobs closer to home. “I’ve been gone, and I didn’t really expect to come back, but at some point I’ll probably have to be there 100 percent of the time. There’s definitely opportunities to kind of live in both worlds,” she says.

Her family still may be forced to sell some of the farm. Erica wants to hold on to 20 acres, but a half-acre of hops isn’t enough to justify 330 acres of land. But she’s hoping that the buzz that the hops have garnered will convince someone to buy the land for agriculture, instead of condos. With any luck, Goodmanor Farm will host more hops hills – not more houses.