Meet the Maine Teenager-Turned-Landscaper Thanks to Grazing Goats

A love of both animals and cheese inspired the Grazy Goat Girls. 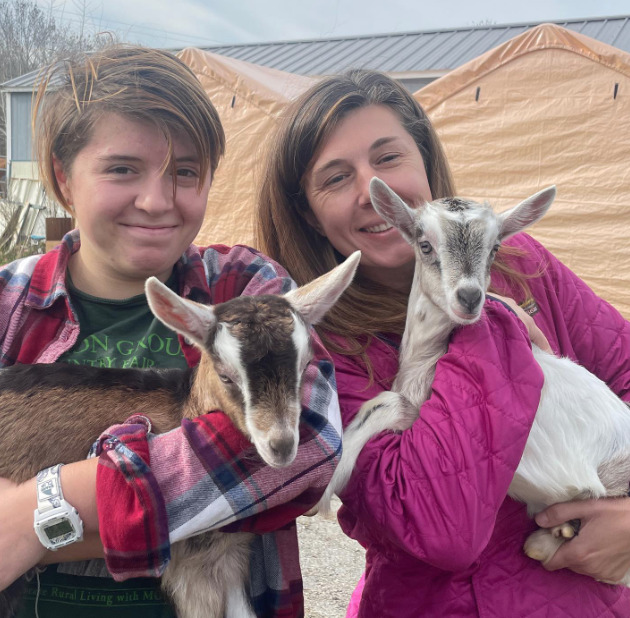 Anna and Kimberly Zlotkowski with Liza and Luna, two of their five goats.
Photography by @grazygoatgirls
Share
Tweet
Pin
Email

Anna Zlotkowski has found an unusual–but fitting–afterschool job. Along with finishing her last two years of high school and playing on the basketball team, the 17-year-old has a deep passion for animals. So, rather than walk dogs or volunteer at the SPCA, she’s started her own landscaping business—using rescued goats.

Zlotkowski, who lives on Isleboro Island, off of Maine’s midcoast, spent her summer helping her mom Kimberly and sister Gaby sell oysters at the local farmers market. It was there that they  met another vendor selling homemade goat cheese. A quick taste and the family became obsessed with the cheese.

“I was like, ‘Mom, let’s get some goats so we can have some goat cheese,'” says Zlotkowski.  Understandably, her mom wasn’t entirely sold on the idea, but it happened that Kimberly was looking to clear some land. Zlotkowski saw her opening.

Goats eat a lot of vegetation that other livestock won’t touch, including invasive plants such as multiflora rose, sumac, barberry and more. They’re also able to access brushy areas that are inaccessible to some larger equipment, and they naturally fertilize while they work.  Zlotkowski dove into the research on goats, looking at everything from how to trim goat hooves to the vitamins and supplements they would need. She pitched the idea to her mother: Why not get some goats to clear the land, and they would also benefit from their milk and cheese? Kimberly got on board, and Grazy Goat Girls was born. 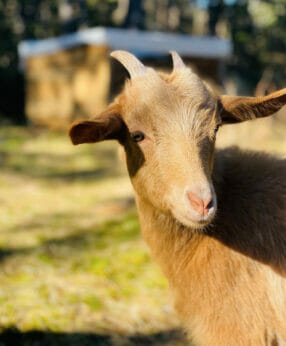 Peaches the goat. Photography by @GrazyGoatGirls

Over the fall, Zlotkowski acquired five goats, and she has been getting the animals acclimated to their new environment. She has let the goats clear some of her mom’s land, inspecting their progress and timing, to help her handle inquiries from people throughout the region about clearing their properties in a safe and eco-friendly manner.

“We’ve had quite a few people email us and text us on Instagram wondering if [the goats] could come clear and when. Even people on other islands ask about having them come over,” says Zlotkowski.

While she builds up the landscaping business, Zlotkowski is also hoping to make goat cheese, her initial motivation for the project. Of the five goats now in their herd, they suspect one—they’ve named her Karen—is already pregnant. Zlotkowski hopes the upcoming pregnancy test reveals a positive result. “Karen would give birth at the end of January, and I’m hoping I’ll be able to milk her and try to make cheese.”

Even though there are only five goats, they’re a lot of work. Each day, depending on the weather, Zlotkowski will put the goats out in their pen, give them fresh water and hay and check to make sure they’re all happily adjusting. Two of the goats are still babies and need to be bottle-fed. The others need vitamins and other supplements, along with hoof trims and other grooming.

With two years left of high school, Zlotkowski is growing her burgeoning business slowly, balancing the goats with seeing her friends and attending basketball practice. She wants to see how big she can make Grazy Goat Girls before leaving for college. When she’s not there, Zlotkowski will have to find someone to care for her goats, before she can come back. “After college, I’m hoping I can come back and start a farm,” says Zlotkowski.

Although Zlotkowski has embraced her new herd, her mom has been slower to adjust to the goats. “When we first got them, she was like ‘these aren’t my goats, I don’t like them,’ but now she loves bottle feeding the babies and just loves them, but still doesn’t admit it,” says Zlotkowski.

Maybe her mom will even take over as caretaker when Zlotkowski is away at school. Until then, she’s happy to lead her herd through fields and pastures, keeping an eye on her goat-cheese-filled future.

Both goat girls are cutie!