Officials are fighting infestations of the cannibalistic insect. 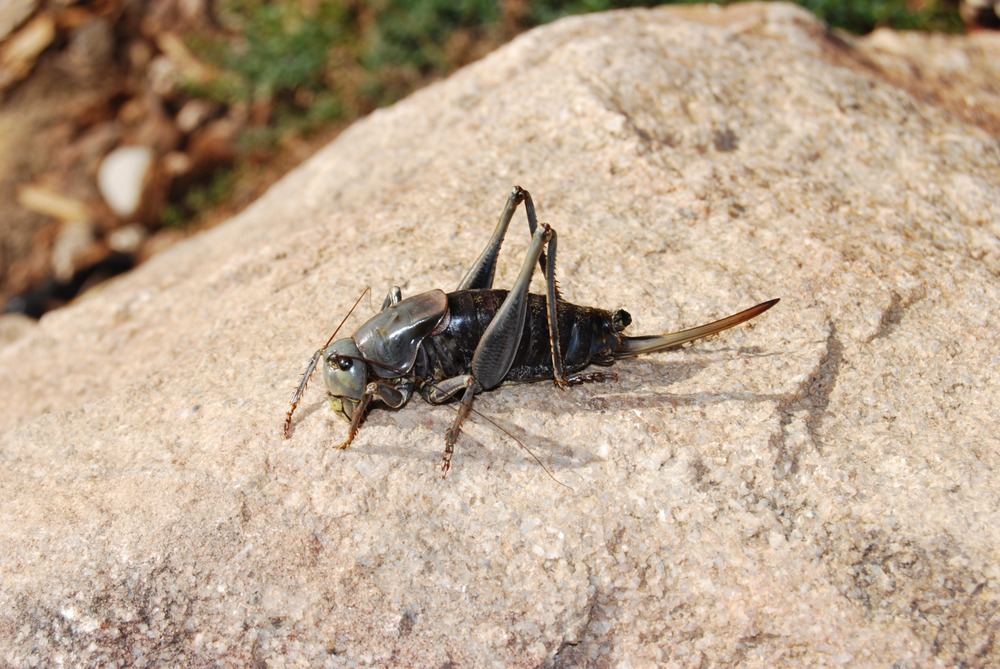 The chirps of crickets heard among grasslands isn’t necessarily a relaxing summer night sound for ranchers and farmers. For those located in the West, it could be a sign of a disastrous infestation of Mormon crickets, a pest currently ransacking crops and grasslands of Oregon in record-breaking numbers.

Mormon crickets are not truly crickets—and certainly not Mormon—but instead are flightless, short-winged katydids with shield-backs that got their name when swarms of them decimated crop fields of Mormon settlers in Utah in the 1800s.

The ravenous insects, which can devastate cultivated crops such as wheat, barley, corn and alfalfa, can also cause huge monetary setbacks to livestock producers by rendering grassland barren for their herd and forcing the farmers to buy supplemental feed.

Populations bolstered by years of ongoing drought coupled with mild winters in the western United States have allowed for an abundance of the insect’s eggs to thrive and hatch. Now, Mormon crickets are all but overtaking massive acreage of farmland in Oregon. In 2021 alone, the crickets led to the damage of a record-breaking 10 million acres of Oregon farmland, the worst outbreak in 50 years.

According to the Associated Press, the Oregon Legislature spent $5 million on a suppression program for the pests in 2021, a fund to which it added $1.2 million this month in the face of the continued outbreak.

The bugs can grow to be larger than two inches long. Despite being unable to fly, the crickets are still capable of traveling long distances and instead move by walking or jumping in huge swarms—think millions or billions of insects. As if the size and spread of the crawlers isn’t creepy enough, their behavior is just as alarming. The crickets are cannibalistic and will eat members of their own species—dead or alive—if they need the extra protein intake.

Existing programs to mitigate the infestations of the crickets along with grasshoppers rely on chemical sprays to kill the bugs off. The programs operate at both state and federal levels, with the USDA’s Animal and Plant Health Inspection Service (APHIS) supporting grasshopper and Mormon cricket suppression in Arizona, Idaho, Montana, Nevada, Utah and Wyoming, in addition to Oregon.

Oregon’s current program allows farmers and ranchers to request a land survey. If surveyors from the Oregon Department of Agriculture find more than three of the crickets per square yard or land, they recommend treatment with a spray of diflubenzuron—an insecticide that inhibits growth and causes bugs to die during molting. This means, however, that once the bugs reach maturity, they are no longer treatable with the chemical spray.

Through the Oregon program, landowners of the treated property are eligible for upwards of 75 percent reimbursement for the cost of the treatment. APHIS also offers payment assistance programs for treatment spray of private lands and covers 100 percent of the cost on federal owned acreage.

But not everyone agrees with the spraying. In fact, environmentalist groups are suing the Biden administration for sprays across western states including Oregon, Montana, Idaho and Wyoming, reports Herald and News, on the basis that the chemicals can harm other wildlife and the government failed to follow proper procedures surrounding the land treatment.

Andrew Missel, staff attorney at Advocates for the West, which is representing the Center for Biological Diversity and the Portland-based Xerces Society in the federal lawsuit, told Herald and News: “In APHIS‘s telling, its program magically affects only grasshoppers [and crickets], and only as much as necessary. But that’s not how pesticides work; blanketing hundreds of thousands or even millions of acres of rangelands with broad-scale pesticides kills bees, butterflies, moths, beetles and other vital species, and threatens to further impair ecosystems already suffering from the effects of drought and climate change.”

Around HELIX Oregon, there are no Mormon crickets here. It is an insult to say Oregon, if this is only Western Oregon. I plan to see 100 bushels an acre wheat in Umatilla County, Oregon, this year. Our wheat goes to Japan for pastry products mostly. Give me the counties of this infestation of bugs, please. I am contacting, Dan Ball, doctor of weed and bug science, retired, from OSU. I am sorry, but preppernurse1 on youtube said Oregon crops are at risk from these Mormon crickets: I intend to disprove this for my town.

I have definitely heard more crickets than usual lately (Lane and Douglas Co areas) but haven’t seen swarms. There HAS to be another solution other than the spray that is likely to harm other wildlife. Other cultures catch, roast, and eat crickets and cicadas, or feed them to their animals.