Getting to the Root of Ginseng Farming’s Impact on Native Plant Populations - Modern Farmer
Environment, Plants

A recent study attempts to understand an industry that’s been ridden with secrets. 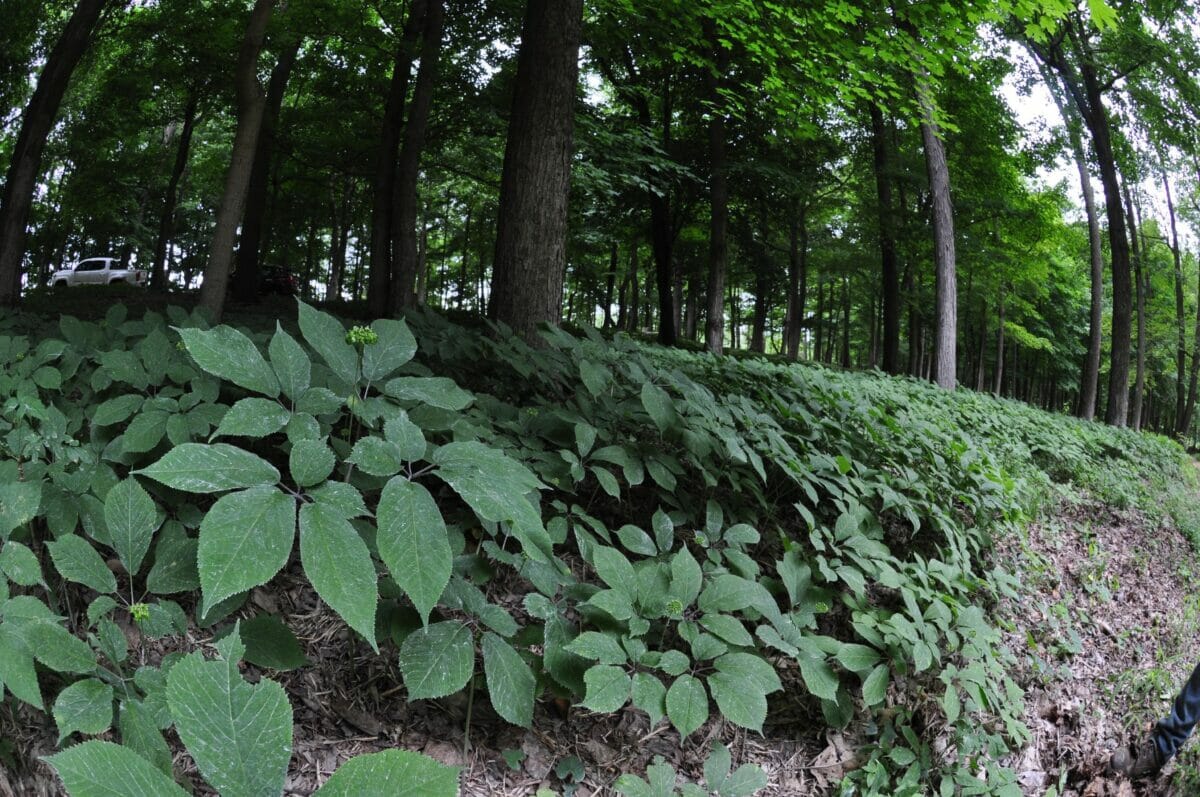 It’s an endangered herb, routinely yanked from Pennsylvania’s forest floors due to a soaring demand in Asia, but the impact of ginseng production on the plant’s wild populations has been something of an enigma in the state.

American ginseng has been gathered commercially in the northeastern United States for nearly three centuries. Each year, roughly 1,000 pounds of dried ginseng root are exported from Pennsylvania. Much of that is sold as wild ginseng, which has been listed in the Convention on International Trade in Endangered Species of Wild Fauna and Flora agreement since 1975. But a new study finds that it might not be so wild after all—and may have negative repercussions for native populations of the plant.

The study, published in Economic Botany, examined statewide ginseng forest farming in Pennsylvania. To better understand the growing industry, researchers from Penn State University sent an annual survey to ginseng harvesters over eight years, looking at how many people are planting the crop, where the seeds are sourced from and how those seeds might contribute to wild ginseng harvest amounts

Their findings highlight a concern that non-native, commercially farmed material could threaten at-risk wild populations of the plant. While many Pennsylvania ginseng harvesters are planting seeds in forests in an effort to conserve and supplement native populations, they often use non-native seeds purchased online from locations such as Wisconsin while doing so.

The study found that three in 10 retailers that sell “wild” ginseng actually planted it by scattering seeds in the forest. Meanwhile, one in four ginseng growers reported using commercially available stock that’s often adapted to different regions and farmed with inputs of fertilizer.

Eric Burkhart, the botanist and Penn State associate teaching professor who led the study, says this data is necessary to build better policy to ensure the survival of the native species. “We have a plant that is arguably one of the most regulated, most valuable plants from the wild of North America and yet we just can’t seem to conserve it through traditional means like laws and regulations,” he says. “It’s really like the Wild West out here. There’s no real understanding by people in the supply chain of what’s going on in the other parts of the supply chain.”

Burkhart says secrecy exists because landowners and ginseng diggers who plant seed have concerns over government tracking when submitting buyer paperwork to the state each year. This comes from a fear of price devaluation, theft and taxation. Diggers also often disagree about what should be classified as wild plant material, as market price for wild-appearing ginseng roots is as much as 100 times greater than for artificially shaded field-cultivated roots. The result has been that many producers will not fess up to planting seed for a crop they may eventually sell as wild.

The researchers presented a possible roadmap forward that looks at promoting forest farming while preserving wild stocks. First, they say product value chains should be mapped out to increase transparency. Feasibility analysis and looking at alternative value chains to drive forest farmer profits could be one way to create incentive, they note.

They also recommend the creation of a mechanism that will allow remaining wild stock to be conserved. This might involve encouraging and teaching farmers to preserve heirloom stock while developing ginseng nurseries to produce wild stock. They also see an opportunity to have forest-farmed ginseng marketed as a green alternative to a wild product, with increased interest around sustainability in food.

Despite the fact that the research looks at the conservation of ginseng, Burkhart says he hopes it might inform policymakers in food and agriculture to think differently about their approach to deal with at-risk species.

“This illustrates our capacity as a society to conserve a species in a scenario that is rapidly evolving on many fronts,” he says. “ Nobody wants to see a species go extinct, and I think this is an opportunity to look at how rural America can better work with government to do conservation in the 21st century.”

Popular
Could Dissolvable Cranberry Film Replace Plastic Packaging Someday?Emily Baron Cadloff
Alaskan Salmon Face a Stream of New MinesBecki Robins
7 Smokable Plants You Can Grow That Aren’t MarijuanaBrian Barth
Why Don’t We Eat Turkey Eggs?Dan Nosowitz
Goat Sex: Everything You Wanted to Know But Were Afraid to AskAndrew Amelinckx
Explore Modern Farmer
Related
Animals, Environment, Technology
Alaskan Salmon Face a Stream of New MinesBecki Robins
Animals, MTMF
Meet the Maine Teenager-Turned-Landscaper Thanks to Grazing GoatsBridget Shirvell
Animals, Environment, Health
To Stop New Viruses Infecting Humans, We Must Protect Bat HabitatAlison Peel, Peggy Eby, Raina Plowright
Labor, Politics
For Young Farmers, Land Access Will Make or Break the 2023 Farm...Emily Baron Cadloff
wpDiscuz
We use cookies on our website to give you the most relevant experience by remembering your preferences and repeat visits. By clicking “Accept”, you consent to the use of ALL the cookies.
Cookie settings ACCEPT
Privacy & Cookies Policy