These nurseries are looking to revegetate wildlife habitats with native plants. 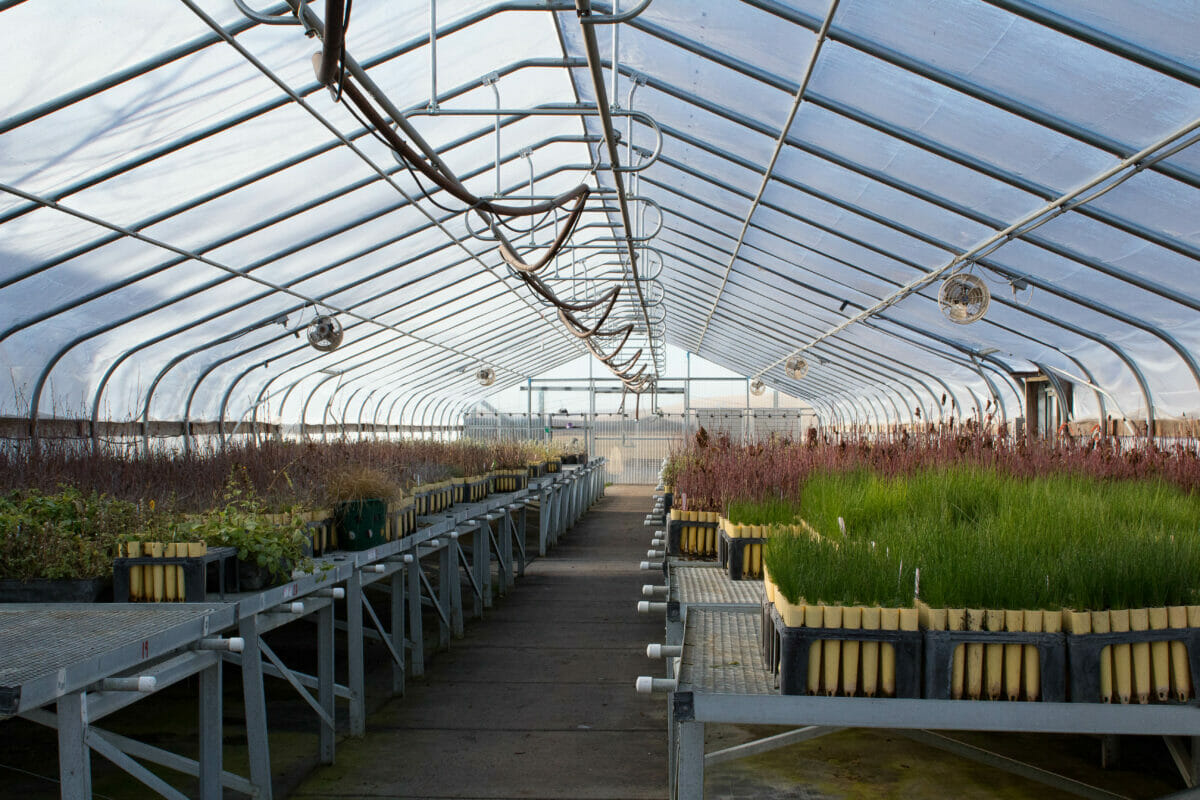 The nursery at the Confederated Tribes of the Umatilla Indian Reservation (CTUIR) is not your typical nursery.

CTUIR grows only native plants—defined as indigenous species that evolved naturally in an ecosystem—and its sales to landscapers and home gardeners make up only a small portion of its business. The nursery’s main mission is to grow native plants that will go towards revegetating natural wildlife habitats in the high desert, upland and wetland areas of eastern Oregon and southeastern Washington.

Most of the plants the nursery grows from seeds are collected in the wild, then returned there for habitat restoration projects. Plants such as red osier dogwood and common snowberry are used to restore stream habitats in attempts to replenish populations of threatened native salmon species and other endangered fish, such as lampreys.

These fish are not only important to the ecology of this region, they have cultural significance to the tribe in restoring one of their First Foods. In the tribe’s creation story, foods such as clear cold water, salmon, other meats, roots and berries were gifts from the creator and came with the responsibility of protecting them, says CTUIR manager Gail Redberg.

“It’s at the core of who they are—that they’re stewards to the land,” says Redberg, a retired science teacher, who, although not a member of the tribe, has worked for the nursery for almost a decade. “The land is not just a place you pass through or your little piece of it. It’s much bigger. It has shaped them into the kind of people that they are, so it’s important to give back to the land.”

The staff of five grow about 70 plant varieties, which fluctuates depending on the restoration projects on which they are working. Leftovers are available to landscapers and home gardeners interested in introducing more native plants to their yards. And the nursery participates in the tribal summer youth program, teaching any interested youth about its work.

Jeremiah Pinto, a research plant physiologist for the US Forest Service’s Rocky Mountain Service Station, estimates that before an organization called the Intertribal Nursery Council was started in 2001, there were around 10 Indigenous plant nurseries in the US. Since then, dozens more have popped up, and there are currently up to around 100 tribal native plant nurseries in operation, says Pinto. Many are small scale and funded by grants, which often means they are in operation for only a short time to fulfill the needs of specific habitat restoration projects, then they may close when funding runs out. 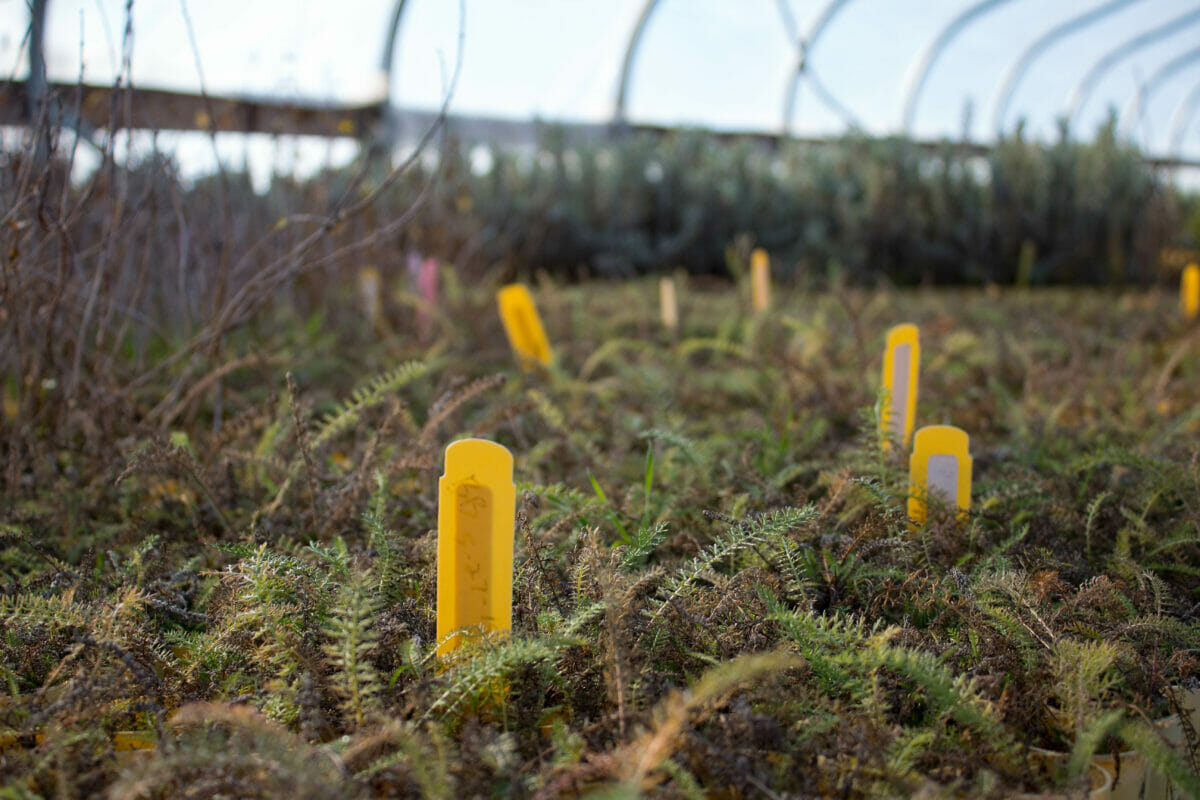 For several years, CTUIR’s nursery has been working on an important project to restore sagebrush and bitterbrush to the landscape of eastern Oregon after fires destroyed it. These plants are crucial to the threatened greater sage-grouse in providing protection for the birds’ mating grounds, which they return to year after year.

The greater sage-grouse project was also part of a study, headed by Pinto, which looked at different growing techniques to increase these plants’ chances of survival when re-planted in the wild. Unlike most nursery plants, which get a lot of post-nursery care either on farms or lawns, native plants that return to the wild face extra growing challenges.

Aside from his research work, Pinto’s other role is as a tribal nursery specialist for the Forest Service. Working with tribal native plant nurseries around the United States, he answers questions, offers technical support and runs the annual meetings for the Intertribal Nursery Council. These meetings cover new research and technical topics as well as cultural topics, says Pinto, a registered member of the Navajo Nation, or Diné.

In this role, Pinto stays connected to a variety of native plant nurseries, such as one in Cherokee, North Carolina called the Jessie Owle Dugan Native Plant Greenhouse Facility. Begun in 2014, this nursery’s purpose started as growing native and culturally significant plants for habitat restoration and has since expanded into growing crops for Cherokee farmers and seed saving.

Collaborative educational projects are sprouting up all the time, says David Anderson,  a horticulture operations supervisor for the nursery, such as hosting Cherokee language lessons in the gardens for elementary school students, in which they can use original names to talk about the traditional plants around them. This month, the nursery is doing a hickory tree planting with the reservation’s five stickball teams, giving them hickory trees to plant on their possessory holdings (the equivalent of privately owned land) to help repopulate the declining plant and to harvest the wood to make the traditional stickball sticks. Team members can harvest and share the hickory nuts, a traditional food source, or donate them back to the nursery.

“The goal from my point of view is to provide important plants for wildlife, ecology, traditional foods and artisans,” says Anderson, who realized his passion for plants in college and, after working in Wyoming for the federal government, was excited to return to his home for this job four years ago.

The nursery, which has become a community hub, selects what it will grow by surveying the tribal community to see what plants members are having trouble finding. They grow about 30 different species at a time, such as bloodroot and river cane. Both these plants do double duty as essential components in stream restoration projects.

There are less than 100 tribal native plant nurseries around the country involved in similar projects, such as providing plants for forestry and superfund sites at the Confederated Salish and Kootenai Tribal Native Plant Nursery in Pablo, Montana or raising butterflies and conserving critical pollinator habitats in Tulsa, Oklahoma for the Muscogee (Creek) Nation’s Natives Raising Natives Project. Pinto, who appreciates being able to have a job that utilizes his forestry knowledge and connects him to his tribe, says that, while each tribal nursery is involved in a diverse range of projects, the goal is all the same—to grow plants that serve a purpose.

Beautiful article, Catie. Thank you for honoring the People of the Land who work so hard to give back to the earth.