Surviving COVID-19: How US Farmers Are Coping In Uncertain Times

Producers are coming up with creative ways to sell their produce, as farmers’ markets shut down across the country. 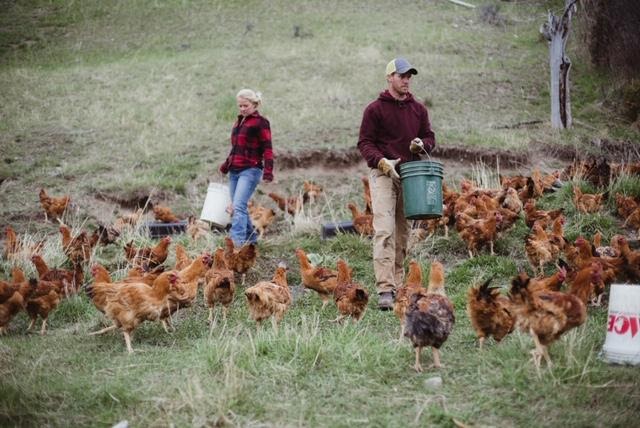 Kira Jarosz was watching the news unfold in mid-March when she realized she needed to be prepared for the arrival of COVID-19 in her community.

Jarosz, a farmer based in Livingston, Montana, relies on the consumers who attend their local farmers’ in Bozeman to buy her pasture-raised pork, poultry and eggs. Their purchases cover more than 50 percent of her farm’s total revenue, she says. But as confirmed cases of COVID-19 started to pop up within her state, she thought it would just be a matter of time before farmers’ markets in her area would be shut down.

In an attempt to get ahead, Jarosz and her husband decided they would create an online order form for their customers and implement free home deliveries the following week. They notified followers of their transition over social media and the Bozeman Winter Farmers’ Market was cancelled the next day.

“As farmers, especially small farmers catering to a local market, we always need to be creative,” Jarosz says. “When normal or established marketing routes disappear, you’d better be proactive or your sales will disappear, too.”

The Montana farmer says she has experienced record sales since putting out an online order form. However, she’s also aware that a lot of people are stockpiling right now over the panic that the virus has created.

In an attempt to address the climbing confirmed number of cases, state governments are encouraging measures such as social distancing, avoiding non-essential gatherings and closing businesses such as shopping malls, bars, restaurants and farmers’ markets. Such demands have so far disrupted the daily routines of Americans, and economists have predicted the US GDP will shrink by 14 percent in the second quarter of 2020.

Despite not knowing how long the pandemic will last, Brady Brewer, an agriculture economist and assistant professor at Purdue University, says the virus will impact producers of various sizes across the agriculture sector.

“You will see some farmers exit,” he says. “There’s always economic hardship whenever things like this happen. You’ve got to find new channels to sell your product and that’s costly.”

A recently published guide from Purdue University offers a number of tips to navigate new markets while limiting exposure to COVID-19. Suggestions include utilizing phone and online platforms for sales, managing inventory based on long term needs, adjusting crop scheduling and making use of social media as a means to connect with customers.

Brewer estimates the financial blow experienced by farmers will be short term as they attempt to adjust. He adds that although people will always be in need of food, there are a number of looming issues that could be detrimental to farmers.

Closing borders could have an impact on farmers whose goods are shipped elsewhere, and the virus could kill people who were valuable consumers and workers on the farm, he says.  With social distancing measures in place, it might also be hard for farmers to find people to work on their fields in the coming months.

Another concern, Brewer adds, is that smaller farmers specifically could be negatively impacted if consumers who normally buy their local premium products are not willing to do so in a few months time if the economy crashes.

Phil Hannay, a fruit, vegetable and chicken farmer outside of Buffalo, Minnesota, is worried about the virus’s economic impact both currently and in the coming months. His CSA boxes represent about 90 percent of his earnings. Right now, he says, there would normally be an increase in signups for his summer season boxes, but he’s noticed a significant decline.

“People are out of work and [they’re] not going to spend money on something that they’re not going to get until summertime,” he says, noting that deliveries start in June. ”I’m not going to have any money coming in right now and that’s kind of a little bit [of] anxiety for me.”

To ease potential concerns of his customers, Hannay published a COVID-19 Pandemic Plan on his website at the beginning of March that outlines details on how he’ll be trying to work through the public health crisis. He says that it’s been a challenge dealing with the uncertainty around the virus and he’s started to think about where he might have to cut costs. But he’s optimistic people will eventually come to their senses regarding the importance of buying farm-fresh food within the community.

“People are usually pretty receptive… There’s this feeling of doing good by helping yourself eat healthier,” he says. “I think people will embrace it.”

And Jarosz, who is also grappling with unknowns about the pandemic, says that she is concentrated on keeping her farm running because it’s something that she is able to control.

“You know, I’m exhausted,” she says. “And there’s a bit of a scramble for sure. We’ll divide and conquer all our deliveries… So I think that it’s doable, but you know, we’ll just have to see for how long.”

We need these small producers, keep supporting them.

We need these small producers.