For Boston-based restaurant owner Chris Himmel, it’s all about “respect for ingredients” 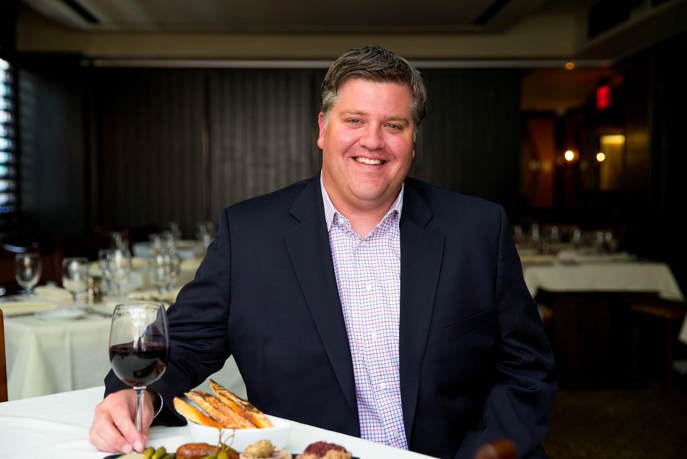 In most places, news of a team-building event isn’t necessarily something to look forward to: awkward conversations with the boss, guessing who’s going to drink much, and all the seemingly endless opportunities for things to go south. But that’s definitely not the case for a group of employees at Boston-based Himmel Hospitality Group.

That’s because at HHG, “team bonding” means renting an RV, eating at some of the nation’s best restaurants, meeting a handful of incredibly interesting farmers, ranchers, and fisherman, and generally having a grand ol’ time—all in the name of getting to better know your colleagues and serve your customers.

Himmel Hits the Road: The Background

For the past three years, Chris Himmel, the company’s president and owner of Boston restaurants Bistro du Midi, Grill 23, and Post 390, and Harvest in Cambridge, Massachusetts, has taken a small group of his more senior-level staff on a roadtrip to visit the restaurants’ small-scale purveyors, and to give the crew a chance to learn more about the stuff they cook, serve, and pour, and, of course, get in that all-important bonding experience. Nicknamed the hashtag-worthy “Himmel Hits the Road,” the annual event is more “road trip with friends” than “forced camaraderie with people you already see too much.”

“I have always been a big believer that the best way to truly learn and develop a passion and appreciation for something is to experience it firsthand,” says 40-year old Himmel, who grew up working in the family’s restaurants (his father opened Grill 23 in 1983)—and not just the cush gigs you might expect of the owner’s son. From teenage summers working in the steakhouse’s maintenance and facilities department to stints as a prep cook, server, and bartender, Chris made the rounds within the family business—and outside it, most notably at Chef Thomas Keller’s The French Laundry in Napa Valley—before eventually returning home and taking on a senior role in the company.

It was during his time at The French Laundry where Chris developed a passion and “a respect for ingredients,” as he says, a sentiment he brought back to Boston and has served as a guiding principle at his restaurants, and eventually as the inspiration for the Himmel Hits the Road trips. But it’s not just the ingredients that Chris finds so important—it’s the connections the trip inspires, too, both with the farmers and within the group.

“This whole industry is relationships,” Chris said. “Himmel Hits the Road is an opportunity to share these relationships so the staff has the chance to develop the same passion and appreciation I’ve always valued for partnering with the finest farms, fishermen, and producers.”

Lauren Brakoniecki, Post 390’s Private Dining Sales Manager, see the trip as a chance to say thank you. “We’re very fortunate to spend a few days visiting new farms and meeting our partners with whom relationships are typically long distance and somewhat anonymous,” she says. “During those visits, we work hard to celebrate the purveyors who contribute to our success as a restaurant, and we do so in an unbelievable setting while having fun. It reminds us why we love what we do.”

But Where To Go?

Himmel Hits the Road just completed its third season, and each year has brought the team on a different adventure. For the first trip, in 2016, Himmel rented an RV and took the group on a cross-country road trip from Boston to Los Angeles with stops along the way to fish, forage, and cook with restaurant partners. The route took the crew far enough south to drink their way down the Kentucky Bourbon Trail and smoke country hams with legendary Allan Benton in Madisonville, Tennessee. The following year, Himmel flew everyone to Seattle before renting the RV, which they then drove down the coast to Portland and Napa, stopping along the way at restaurants of Himmel Hospitality alumni. During that trip, they set-up a pop-up East vs. West Coast rooftop dining experience featuring competing raw bars, a mulefoot hog roast, grilled king salmon, and other flavors from the opposite sides of the country.

This year, however, #HimmelHitsTheRoad focused on the team’s own backyard: New England cuisine. Over three weeks, crews from HHG’s restaurants toured Vermont, Massachusetts, and Maine. The first leg of the experience took the a crew of six from Post 390, plus Himmel, to Vermont, where highlights included visits to Spring-Rock Farm, the east coast’s largest Wagyu beef operation, and Whistle Pig Distillery, a local, top-shelf whiskey provider. Other stops included a Grill 23 hosted surf and turf in Portland, Maine, and a collaboration between Bistro du Midi and Island Creek Oysters at the later’s Duxbury, Massachusetts, farm.

The process of deciding where to travel for the trip is simple: Chris considers what ingredients and regions his team is excited to explore, and also what existing relationships with chefs and/or restaurants the group is looking to deepen. Case in point: this year’s trip to Spring-Rock Farm was the result of Post 390’s executive sous chef, Casey Lovell, suggesting they check out this Wagyu operation in his hometown of Springfield, Vermont.

“It was meaningful to bring a bit of the restaurant out to the farm to be able to show all the folks who had a hand in raising the food—our new friends—that we appreciate the hard work that went into raising the delicious cuts of rarified beef we enjoyed,” explains Nick Deutmeyer, Executive Chef of Post 390. HHG threw a cookout for the staff of Spring-Rock farm (and some local friends, too), for which Chef Nick planned a special menu using a variety of unusual cuts from the prized Wagyu cattle (and he also hemmed the grill for much of the night).

All this learning, relationship-building, and ingredient-appreciating aside, Chris is quick to make sure these trips are a chance for his staff to take a load off and relax. “As is the case with most busy restaurants, there are limited opportunities for our team to break out of the confines of each operation and get to really know one another,” says Chris. “Himmel Hits the Road is a chance for the team spend time quality time outside of work, clear from the day-to-day distractions.”

“It’s an opportunity to reset before heading into a busy holiday season,” says Brakoniecki. “Going on Himmel Hits the Road this year was like a little mini vacation,” added Deutmeyer. “It forced us to take a weekend out of our busy schedules, as a team, to focus on the things that we collectively believe to be important and integral to how we run this business.”

And that’s exactly how Chris likes it: a little learning, a lot of new friendships, and a good time had by all.