The small, family-run operation chooses to use their business as a political platform and apparently, there are plenty of folks who don't appreciate their messages of anti-racism and tolerance. 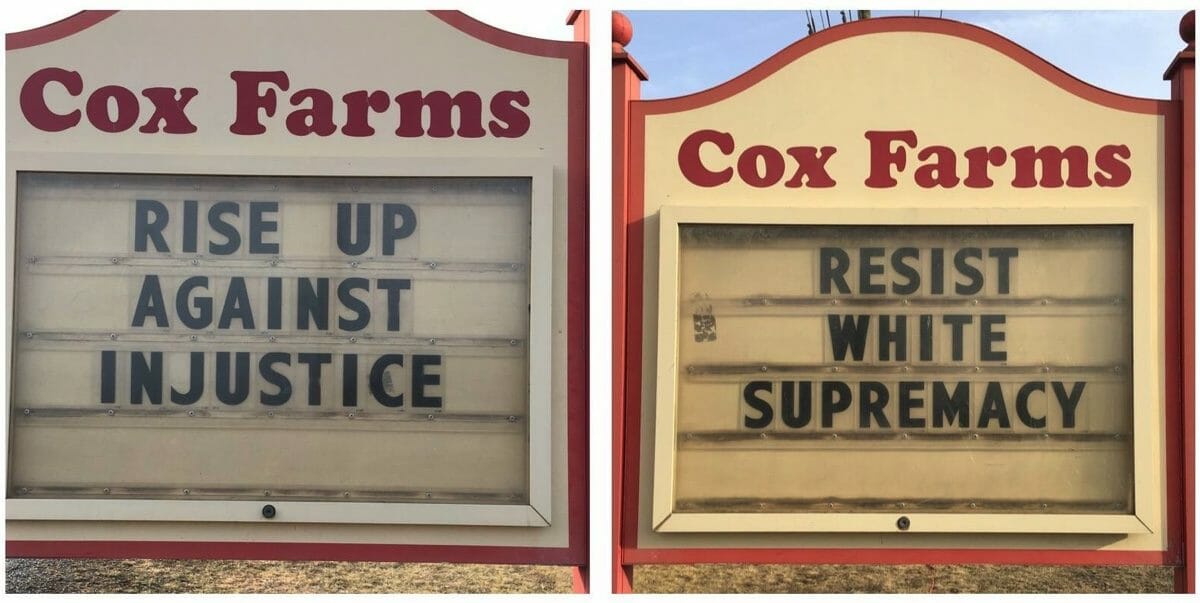 Who would have a problem with fighting injustice? Lots of people.
Photography Courtesy Cox Farms
Share
Tweet
Pin
Email
982 Shares

Cox Farms is a small, family-owned farm in Centreville, Virginia, just a bit west of Washington, DC. They grow some crops and sell produce and plants to locals, and like many other independent farms, their survival is dependent on providing fall entertainment for the community – hayrides, petting zoos, that kind of thing. The family is also politically active, and since the election of Donald Trump, they’ve been using signage at the farm to spread messages of acceptance and tolerance. Earlier this month, they’ve found themselves in the national spotlight after a recent message sparked an explosion of furious political commentary across social media.

“After the 2016 election, we (as the five owners of our family business) formally committed to actively and visibly resist white supremacy,” says Aaron Cox-Leow. That began with pro-immigration signs, saying things like “Immigrants Make America Great” and “We Love Our Muslim Neighbors.” (Virginia has one of the highest Muslim populations of any state.) The Cox family frequently swapped out the messages, and on February 1st configured the letters to read “Rise and Resist.”

Outrage and confusion followed. Cox Farms received an outpouring of vitriolic Facebook messages and even a flow of single-star ratings. Since Facebook “business pages” operate similar to Yelp profiles, low reviews can hurt a business. But Cox-Leow and his family didn’t care much about that. The angry and hateful response did, however, motivate the family to make their message more explicit. On Feb. 9, about a week after the original sign went up, they clarified their words: “Rise Up Against Injustice” and “Resist White Supremacy.”

You might think it would be difficult for anyone to publicly express outrage at those sentiments. You’d be wrong. Tens of thousands of comments flooded Cox Farms’ Facebook page, with debates quickly veering to a pretty wide selection of issues: whether Confederate statues should be removed, Black Lives Matter and its various countermovements like Blue Lives Matter, abortion, Benghazi. Many voiced support; many others voiced opposition.

“We see it as our moral responsibility to use our position of privilege and power to engage visibly and actively in the fight for justice.”

None of this is new to Cox Farms. A sign showing support for the Black Lives Matter movement provoked a boycott from the local Fraternal Order of Police back in 2015. “We got some press for it, and the positive support outweighed the negative, and it ended up being a fantastic season for us,” says Cox-Leow. Decades earlier, a rainbow flag attracted opposition from homophobic visitors.

Cox Farms posted a statement on Facebook about the most recent controversy, stating that “When it comes to speaking out against systems of oppression and injustice, we see it as our moral responsibility to use our position of privilege and power, along with the tools of our trade and the platforms available to us, to engage visibly and actively in the fight for justice. Our roadside sign messages are one small way we do this.”

The Cox family has no plans to give in to the protests. “We’re not strangers to controversy or hard conversations. When we take a stand, we do so knowing that it could hurt our bottom line, and we are comfortable taking that risk,” reads the Facebook statement. They’re true to their word. Last week, in response to the Parkland, Fla., school shooting, the family changed their signs to read “Let’s Stop Killing People,” and “If Not Now, When?”

Cox Farms opens for the season on April 27th, if you’d like to plan a trip to Virginia.