Can Satellite Surveillance Help End Slavery in the Seafood Industry?

Even after reports surfaced of forced labor in the Southeast Asian fishing industry, ships crewed by enslaved migrants persist. Can satellite surveillance smoke them out? 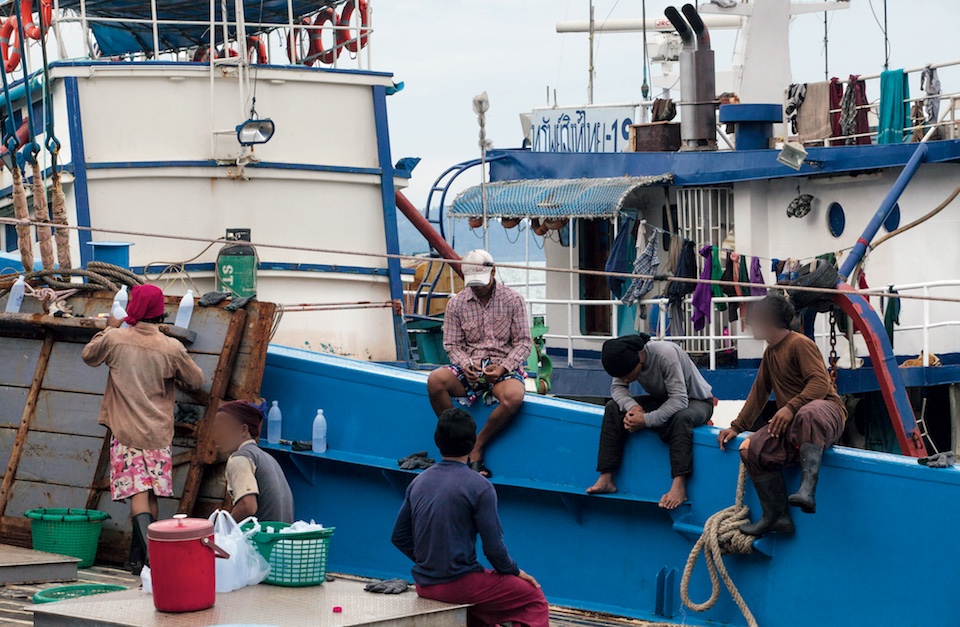 On January 13, 2016, three days before this photo was taken, enslaved Cambodian migrants were found aboard the Sor Somboon 19 and other Thai fishing boats while the vessels docked at the port of Ranong, Thailand.
Photography © Chanklang Kanthong/Greenpeace
Share
Tweet
Pin
Email
777 Shares

Within six months of the AP’s initial report, the government of Indonesia, whose coast Thai vessels routinely trawled, had ordered the release of more than 2,000 enslaved fishermen and arrested at least nine culprits. The media frenzy soon died down. Unscrupulous practices in Southeast Asian waters did not.

Almost immediately, the Thai fishing boats that had evaded the Indonesian crackdown fled the area. Not one of them broadcast Automatic Identification System (AIS) signals, intended to prevent collisions, though some of the ships were large enough to be legally mandated to do so. Still, Greenpeace managed to track this “ghost fleet” to the remote Saya de Malha Bank near Madagascar by monitoring AIS signals from eight refrigerated cargo tankers that picked up the fleet’s hauls and dispatched supplies. (See “Tracking Thailand’s ‘Ghost Fleet,’” below, to trace one such cargo tanker’s route.) 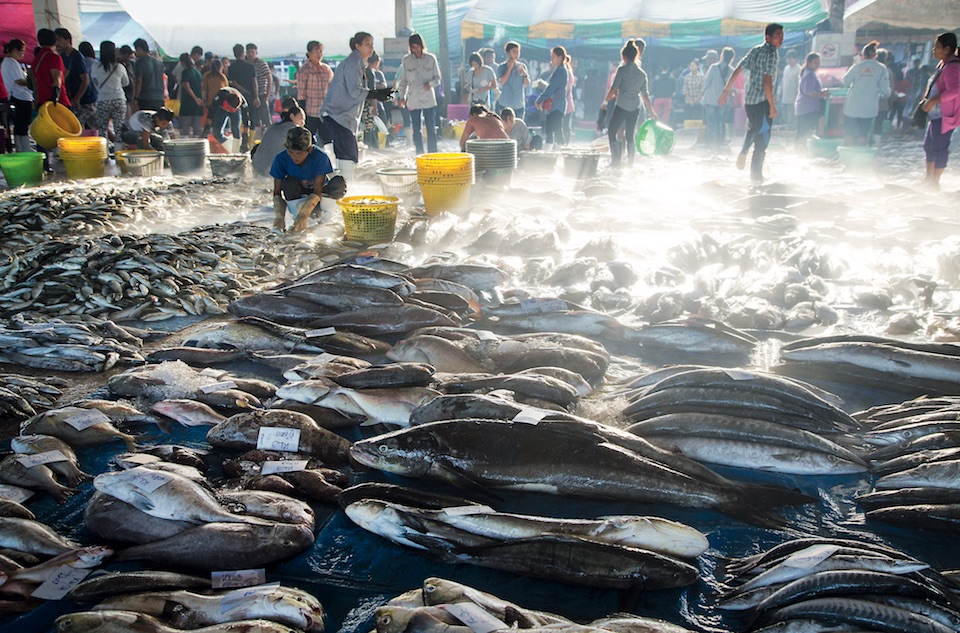 The boats’ haul, being sorted in Ranong, almost certainly included fish caught by the Cambodian slaves, one of whom told Greenpeace investigators, “We were kicked, punched, and beaten with sticks.” © Chanklang Kanthong/Greenpeace

The practice of offloading seafood and onboarding provisions, called “transshipment,” allows fishing boats to remain at sea longer, raising red flags for watchdog groups. John Hocevar, director of ocean campaigns at Greenpeace, sees a clear connection between transshipment and slavery. “Now that we’ve eaten most of the fish in the ocean, boats must go out farther and stay out longer to fill their holds,” Hocevar explains. “It’s become more difficult for fishing companies to turn a profit, so they stop paying fishermen a living wage and, in some cases, stop paying them at all.”

In December 2016, the environmental organization published an investigative summary revealing, among other crimes, further incidences of forced labor involving Thai ships. Five of the 30 Cambodian migrants on the Sor Somboon 19 died at sea; the 25 survivors suffered severe malnutrition. Together, the Kor Navamongkolchai 1 and Kor Navamongkolchai 8 held 15 additional Cambodians captive for over a year. “We were kicked, punched, and beaten with sticks,” one told a Greenpeace investigator.

By March 2017, the Thai government had issued mandatory recalls of its overseas fishing vessels, prosecuting and impounding 61 boats and insisting that the others employ satellite monitoring systems.

KEEP YOUR EYE ON THE WATER.
When Greenpeace tracked the Blissful Reefer’s AIS signals, the satellite system remained largely the purview of ship captains. Today, however, anyone with internet access can monitor commercial fishing boats worldwide, in near-real time, thanks to the user-friendly Global Fishing Watch (GFW) map, launched in September 2016. Above, we overlaid Greenpeace’s abbreviated version of the Blissful Reefer’s route atop a screenshot of the GFW map. If you go to globalfishingwatch.org and click on the map’s light-blue dots, which denote fishing activity, you’ll find information about those boats and their routes. By mid-January 2018, the GFW hopes to have integrated AIS data from refrigerated cargo tankers, or reefers, into the publicly accessible map as well.
Satellite map courtesy of Global Fishing Watch. Ship route courtesy of Greenpeace; iIllustration by Susan Huyser.

Satellite surveillance also informs the new Global Fishing Watch map, accessible at globalfishingwatch.org. (See “Keep Your Eye on the Water,” above.) The data and mapping platform – a joint project of Google, SkyTruth, and Oceana, funded primarily by the Leonardo DiCaprio Foundation – provides a near-real-time view of fishing activity around the world. Tony Long, the CEO of Global Fishing Watch and a former British Royal Navy commander, believes that the real power of the technology lies less in cops-and-robbers-style enforcement than in encouraging responsible behavior: “We’re effectively saying to boat captains: We’re making this information public, so if you aren’t complying with regulations, if you turn off AIS, you will stick out like a sore thumb, and that will bring pressure.” 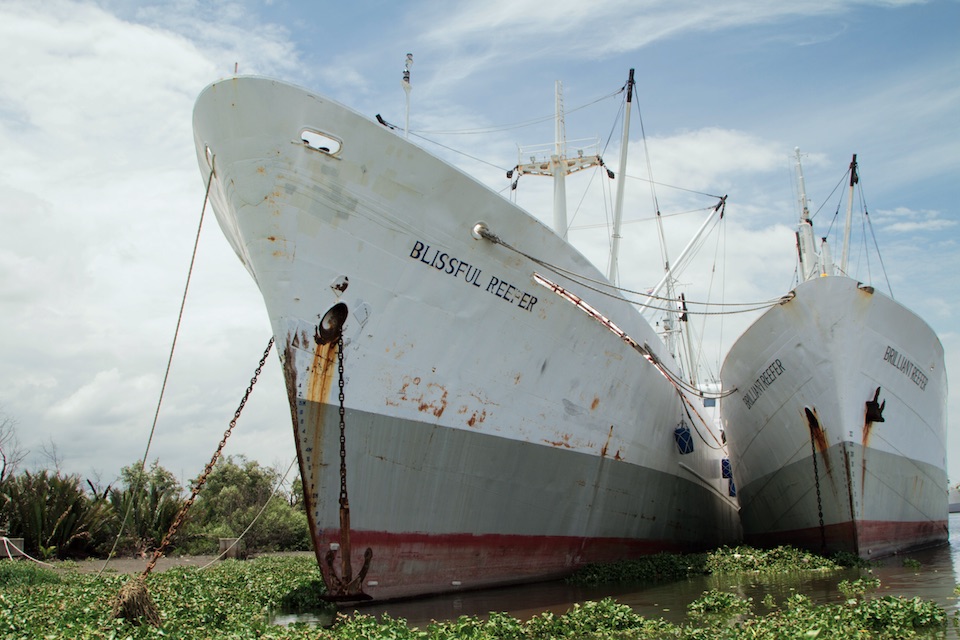 A refrigerated cargo tanker named the Blissful Reefer collected the catch and delivered supplies to Thai fishing boats at sea, allowing them to avoid ports where nefarious activity might be detected. The Blissful Reefer itself was once found to be trafficking eight slaves. The tanker returned to the port at Samut Sakhon, Thailand, in January 2016, where it has been docked ever since.

Long envisions a day when supermarket shoppers will be able to scan the label on any package of tuna or shrimp with their phones and see a map that shows where, by whom, and under what conditions the fish was caught. Already, Boston-based importer and wholesaler East Bay Seafood plans to incorporate the Global Fishing Watch map into the daily inventory list it sends retailers – a small step in the growing effort to raise public awareness. As one enslaved Cambodian fisherman expressed to Greenpeace interviewers, “I want to tell consumers that the seafood you are eating comes from our suffering. . . . When you eat fish, please think about us.”

Popular
The Fertilizer Shortage Will Persist in 2023Shea Swenson
7 Smokable Plants You Can Grow That Aren’t MarijuanaBrian Barth
Agricultural Runoff Pollutes Well Water, a ‘Public Health Crisis In the Making’Madison McVan, Investigate Midwest
Why Don’t We Eat Turkey Eggs?Dan Nosowitz
Move Over, Mezcal. A Sustainable Tequila Alternative Is Taking Over.Hollie Stephens
Explore Modern Farmer
Related
Features, Food Security, Labor
The Rise of Virtual Farmers MarketsLeah Borts-Kuperman
Environment, Labor, Water
California Farms and Farmworkers Attempt to Recover From Record FloodsNaoki Nitta
Aquaculture, Technology
Can Interactive Mapping Tools Guide Shellfish Restoration?Bridget Shirvell
Food Waste, Opinion, Politics, Technology
How Solar-Powered Refrigerators Could Cool Down Climate ChangeAbay Yimere
wpDiscuz
We use cookies on our website to give you the most relevant experience by remembering your preferences and repeat visits. By clicking “Accept”, you consent to the use of ALL the cookies.
Cookie settings ACCEPT
Privacy & Cookies Policy