In Minnesota, solar power and pollinators come together in a sweet combination. 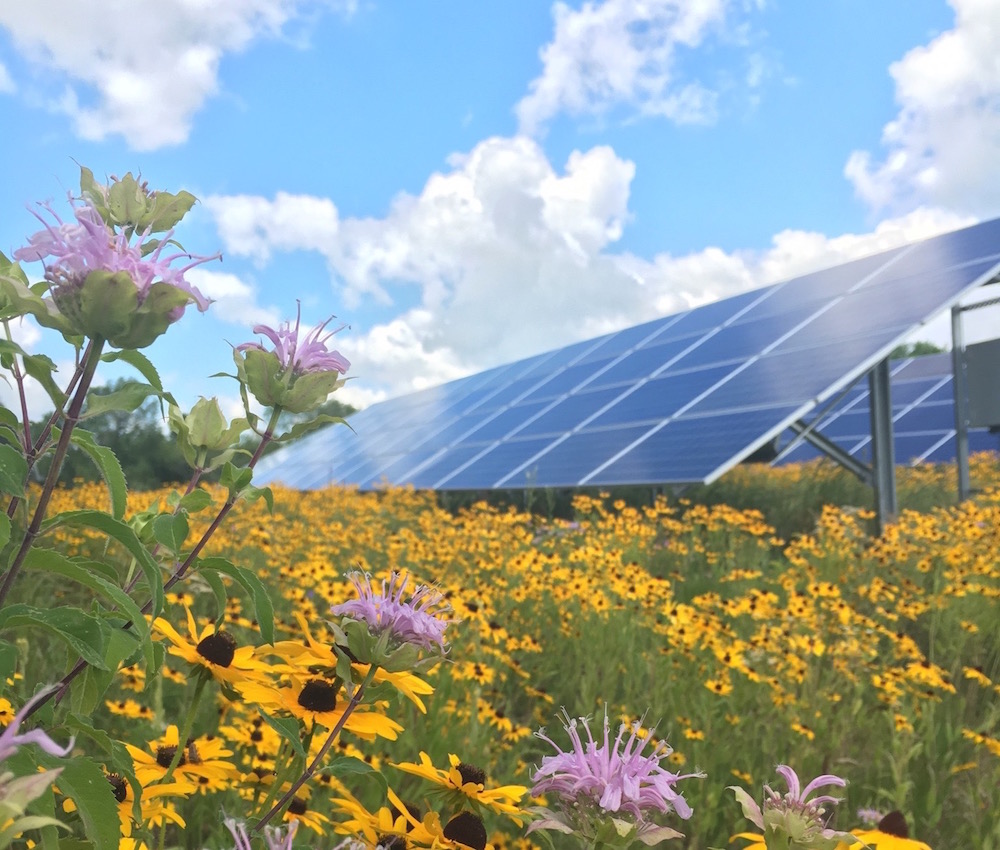 On May 31, 2016, Minnesota Gov. Mark Dayton signed the Pollinator Friendly Solar Act into law, a first of its kind legislation that lays out voluntary standards for managing native habitat – think prairie grass and wild flowers – for pollinators, songbirds, and other beneficial critters. Solar developers and local governments can use these guidelines, which give recommendations on things like what seed mixes to use, the best options for laying out the plants, and how to maintain the site, in order to help provide these beneficial creatures with the a comfortable home. In return, they get bragging rights, so long as they can prove they’re following state regulations. They also have to make their site’s vegetation plan available to the public, among other requirements. The idea is catching fire among solar providers through Minnesota.

Pollinators, as we’ve reported, are facing habitat loss at an alarming rate, due to things like development, logging and mono-cropping. Between 2015 and 2016 alone, the USDA reported a 44 percent decline in U.S. honey bee colonies. Bees play in outsized role in food production, too, pollinating approximately 75 percent of fruits, nuts, and vegetables grown in the U.S.

Connexus Energy, the largest customer-owned power company in Minnesota – they serve about 130,000 customers in the eastern part of the state who buy shares so they don’t have to install and maintain solar panels at their homes – initially incorporated pollinator habitat at its 1.2 acre solar array site, called SolarWise garden, in Ramsey, Minn., soon after the law’s passage. This past April, they took it a step further and installed bee hives.

The company partnered with local beekeepers Bolton Bees on the project, which is the first U.S. solar facility to host a commercial bee operation. Since then, two more, much larger (about 40 acres each), solar array sites from different companies have brought in apiaries, according to Rob Davis from Fresh Energy, an environmental consultancy in St. Paul. “Altogether the three sites provide pollinator habitat equivalent to more than 40,000 homes each having a 6 by 12 pollinator garden,” he tells Modern Farmer in an email. 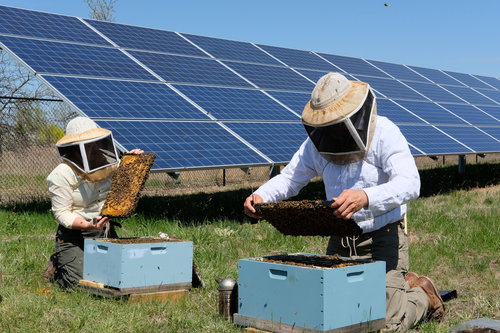 Chiara and Travis Bolton with their bees near a solar array site. Bolton Bees.

Travis and Chiara Bolton, the owners of Bolton Bees in St. Paul, have recently begun their first honey harvest from the three sites and have already extracted 3,600 pounds of what they call “Solar Honey” – honey that’s produced on or around solar array sites – and will be extracting the final 20 frames in October at a special event at the SolarWise garden. Most of the honey will be sold at grocery stores, but a portion will be given to solar garden subscribers or donated to local community fundraising events.

Besides the sites in Minnesota, Bolton Bees is in talks to have apiaries at solar sites in Wisconsin, Iowa, and Illinois. The couple is also promoting the idea of producing marketable honey to other commercial beekeepers in hopes of establishing an industry standard for the practice. They’ve trademarked the name “Solar Honey” and license it to other beekeepers, food producers, and energy companies that agree to follow certain production standards. “We hope that this model can be replicated throughout the nation,” says Travis Bolton.