What’s the Deal With the Cubs’ Billy Goat Curse?

A primer on Chicago's most powerful wizard goat. 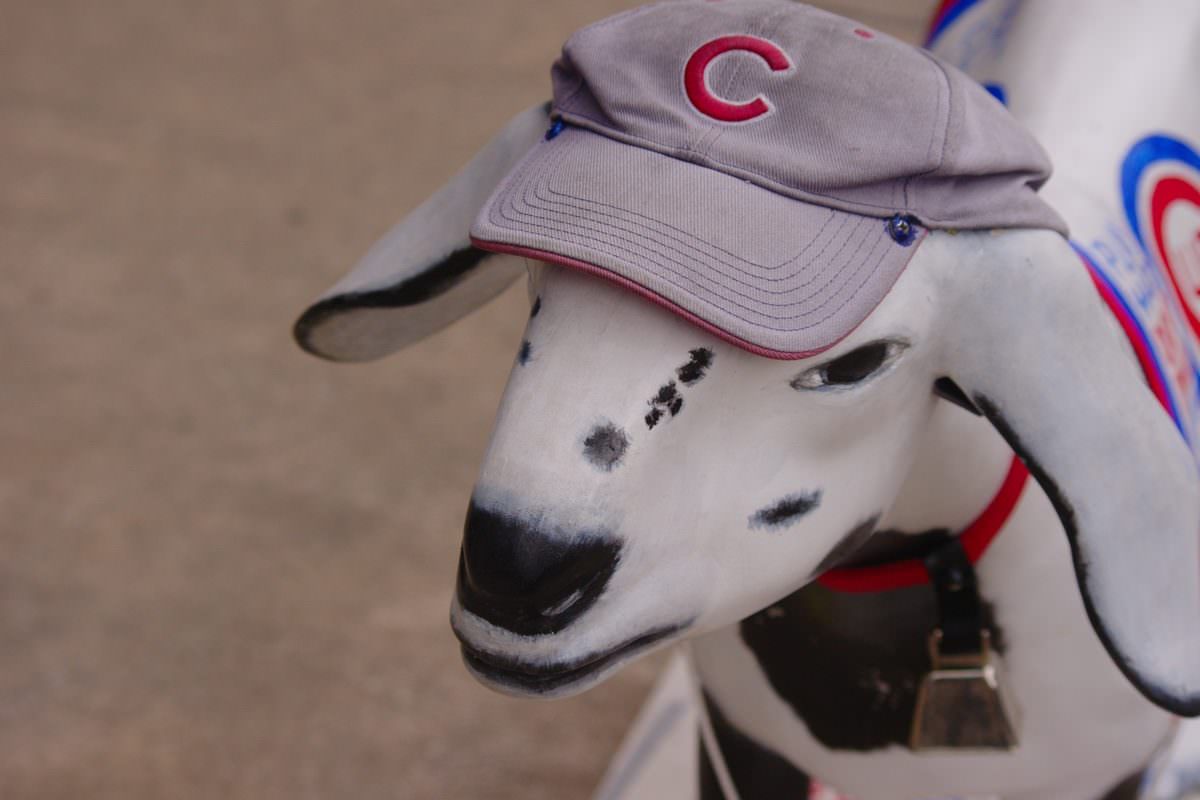 The Cubs beat the San Francisco Giants last night to advance to the National League Championship Series. So, naturally, there’s been a lot of talk in the news about goats lately. And although our own personal news feeds tend to be heavily goat-related all year, non-agricultural types might be wondering why the Cubs produce so much goat news.

The reason is the Curse of the Billy Goat. Here’s the story (much of this information is from the Billy Goat Tavern’s site, which as you’ll see plays a pivotal role in the curse):

In 1945, the Chicago Cubs were a very successful baseball team, with 16 National League pennants and two World Series wins since the club’s founding in 1876. But 1945 proved an auspicious year for the Cubs: Having made it to the World Series, leading two games to one over the Detroit Tigers, the Cubs returned to Wrigley Field to play a home game on October 6. William “Billy Goat” Sianis, owner of the Billy Goat Tavern in Chicago, bought himself two tickets to attend Game 4 of the Series – one ticket for him, and one for his goat, Murphy. The goat was apparently a tavern mascot and a bit of an affectation for Sianis, who had a penchant for publicity stunts. (He paid for the tavern originally with a bounced check, and hung a sign on the tavern during a Republican National Convention banning Republicans from entering.)

Most of this is according to lore, and as the lore comes from Sianis himself, it bears taking with a grain of salt, but the story goes that Sianis’s goat was refused entry into Wrigley Field by an usher. Sianis, being a fairly notable Chicagoan, appealed to the owner of the stadium, P.K. Wrigley, who said, “Let Billy in, but not the goat.” When asked why, Wrigley said that, “the goat stinks.”

Sianis, taking grave offense at this insult to his goat, issued a curse on the Cubs franchise. The exact wording of this curse varies depending on who’s reporting it, but the Billy Goat Tavern says he replied this way: “The Cubs ain’t gonna win no more. The Cubs will never win a World Series so long as the goat is not allowed in Wrigley Field.”

The Cubs never won a World Series again, despite many good teams, especially in the past 20 years. To be fair, the majority of the Cubs teams since 1945 have been awful; fewer than 20 of those seasons found the Cubs winning more games than they lost.

The Cubs franchise has taken notice as the Curse of the Billy Goat has taken Chicago by storm. Sianis’s relatives repeated the tale often, and Chicago sportswriters began writing about it. Those same relatives have been brought out to cleanse the curse, a goat was taken by Cubs fans to an opposing stadium to attempt to “reverse the curse” by setting it on another team, a Greek Orthodox priest (Sianis was Greek) was brought in to bless the dugout, and many, many goats have been brought into Wrigley Field.

Nothing has worked … so far.

Popular
6 Gardening Shows to Watch for Backyard InspirationEmily Baron Cadloff
How to (Actually) Get Rid of Fruit FliesEmily Baron Cadloff
7 Smokable Plants You Can Grow That Aren’t MarijuanaBrian Barth
What I Learned During My First Year of GardeningFrank Giustra
Meet the Mangalitsa, the Hairy Pig That’s the Kobe Beef of PorkJake Swearingen
Explore Modern Farmer
Related
Animals
This Enormous, Deadly Bird Might Have Been Domesticated Before the ChickenDan Nosowitz
Can Yogic Farming Help Boost Crop Yield?Aishwarya Jagani
Plants
6 Gardening Shows to Watch for Backyard InspirationEmily Baron Cadloff
Animals, Food & Drink
The Issue of ‘White Striping’ in Store-Bought ChickenDan Nosowitz
wpDiscuz
We use cookies on our website to give you the most relevant experience by remembering your preferences and repeat visits. By clicking “Accept”, you consent to the use of ALL the cookies.
Cookie settings ACCEPT
Privacy & Cookies Policy