Rush Limbaugh Terrified of Lesbian Farmers for Some Reason 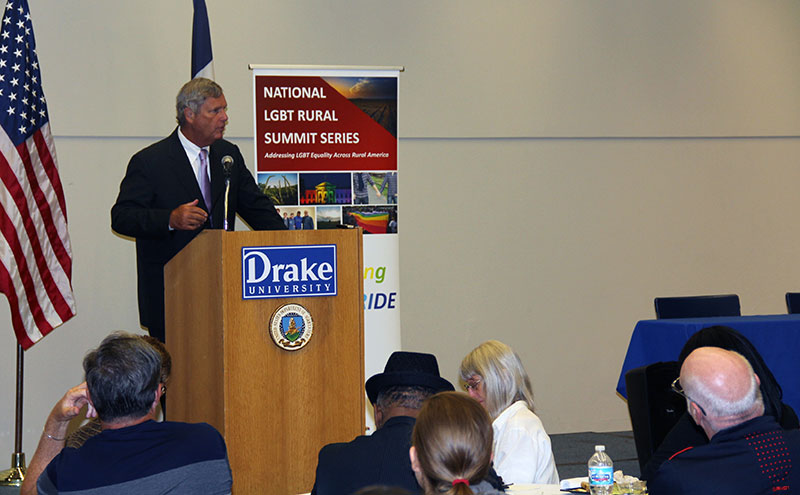 So, the facts: The USDA held an event called the Iowa LGBT Rural Summit, in Des Moines, Iowa, on August 18. Here’s a description of what kind of thing happens at the various events in the Rural Summit series, of which this was one:

Each series will offer a unique opportunity for USDA and other federal agencies to share information relating to policies, programs, and services that exist to protect, promote and strengthen LGBT rural communities. Issues ranging from rural housing loans, community facility grants and bullying will be discussed.

Various right-wing blogs picked up the event, presumably from a Google Alert for “LGBT,” and promptly spun it into something very strange and surreal. “The all-day summit will teach lesbian and transgender hillbillies how to get subsidies from the government like rural housing loans and ‘community facility grants,'” writes Elizabeth Harrington of the right-wing Washington Free Beacon.

Limbaugh picked up the baton from these blogs and, probably, ate it like a Toblerone. On his show, he made the following statement (quoted from New York mag):

They are trying to bust up one of the last geographically conservative regions in the country; that’s rural America … So here comes the Obama Regime with a bunch of federal money and they’re waving it around, and all you gotta do to get it is be a lesbian and want to be a farmer and they’ll set you up … apparently enough money it make it happen, and the objective here is to attack rural states.

There are many obvious things wrong with this line of thought. One is the strange obsession with gay women; all the blogs and Limbaugh specifically reference “lesbians,” even though the USDA is extremely clear about this being an event for the entire LGBT community. Another is the mistaken assumption that the only thing the USDA does is provide aid to farmers; in fact the USDA’s purview includes all kinds of social services throughout both the urban and rural country, from housing loans to small business loans to scholarships to the SNAP program (better known as food stamps).

Another deeply strange and disingenuous line of thought from Limbaugh: “Rural America happens to be largely conservative. Rural America is made up of self-reliant, rugged individualist types,” he said. Farmers are not really among these, factually speaking; the US is on track to spend nearly a trillion dollars this decade on agricultural subsidies, largely to commodity farmers growing corn, soy, and wheat. No other industry is as heavily influenced by government money, from price guarantees to insurance to buybacks of surplus goods. That’s not a judgment, of course; all kinds of factors have combined to force this state of being for farmers. But to somehow insist that rural farmers do not or should not accept government subsidies is…crazy.

Anyway, to quote a friend of ours, we welcome our lesbian farmer overlords, and hope LGBT farmers really do take advantage of the USDA’s programs, even if that’s an egregiously poor reading of the actual event.