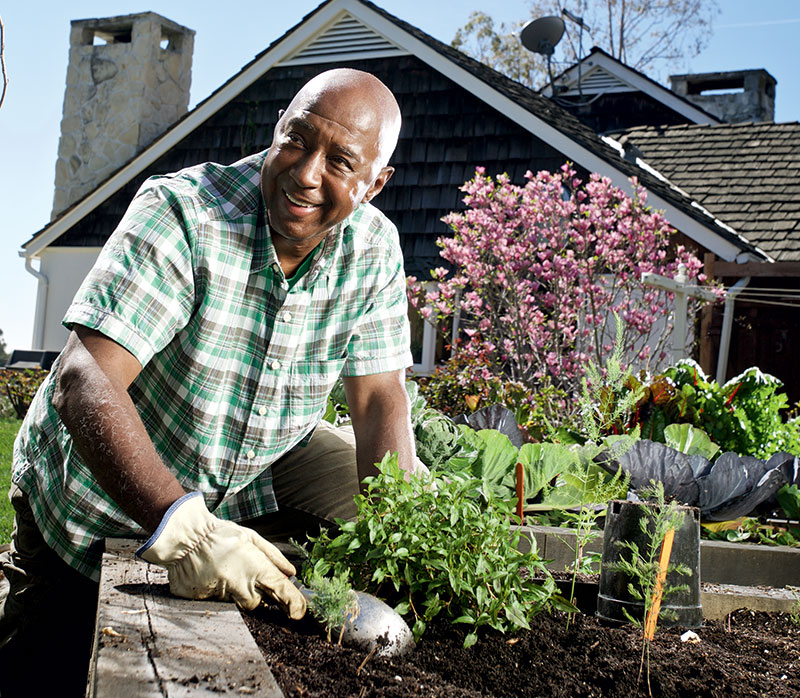 “It’s our family tomato,” explains Jimmy Williams, whose great-great-grandmother carried the seeds from West Africa on a slave ship. Williams learned how to grow them from his grandmother Eloise, a member of South Carolina’s Gullah community. And now he’s sharing the knowledge with Los Angeles’ toniest residents, designing potagers for the likes of Jennifer Garner and Leslie Mann, and selling plants at the Santa Monica and Hollywood farmers markets. Williams has also created the first edible garden at L.A.’s Natural History Museum and co-authored From Seed to Skillet with garden writer Susan Heeger. “Planting seeds has been my favorite activity since I was four years old,” he says. “It just might be the most spiritual thing there is.”

What seeds should beginners start with?
Lettuce, because it’s easy and you won’t get discouraged. Kale, chard – all the greens are pretty simple. I grow red ‘Malabar’ spinach and ‘Purple Tree’ collards. Peppers and beans are easy, too. ‘Incan Giant White’ pole beans produce limas that are four times the usual size.

You prefer raised beds. Why?
You’re bringing in the soil and have control. You don’t need to plant cover crops or constantly test the soil. Nor do you have to worry about having too much clay like we do in Southern California.

How do you keep your soil fertile, sans chemicals?
Compost and worm tea. I put vegetable scraps and spent plants into my worm bins, and the worms break it all down. Then I dilute it with water, five to one. In addition to using worm tea to drench the soil, I combine it with compost tea and spray the leaves to feed my plants and deter pests. Picture being an aphid when someone’s spraying stinky liquid on you! You also want earthworms in your soil – the most beneficial microbes and bacteria are in the tunnel of a worm. You can order the cocoons online at groworganic.com.

Explain your obsession with heirlooms.
When I asked my grand-mother why she grew only ‘Goosecreek’ tomatoes, she said, “Did you taste them?” Plus, that tomato represents an essential piece of Gullah culture that’s been preserved for centuries. Here’s another great plant backstory: An organic certifier who knew Bob Marley once offered me some of the mint Marley used to grow. That was 18 years ago, and as far as I know, we’re still the only ones who offer it.

Are you worried that future generations won’t protect the past?
My son Logan was 12 years old when he started coming with me to the farmers markets. He’d help me set up, then play video games. One day, after I returned from a bathroom break, our booth was mobbed with people. Logan was repeating all the stuff I said. It goes to show that if you leave them alone, they’ll take it in. It’s up to us older folks to pass on our expertise. That’s why my nursery is called Logan’s Gardens.

I used to grow a few vegetables just for fun. It was actually more expensive than buying them in terms of my labor etc. Now I want to grow them for survival. How do we do this in a cost-effective manner? Not interested in lettuce!