Why would you want to do all that the hard way? 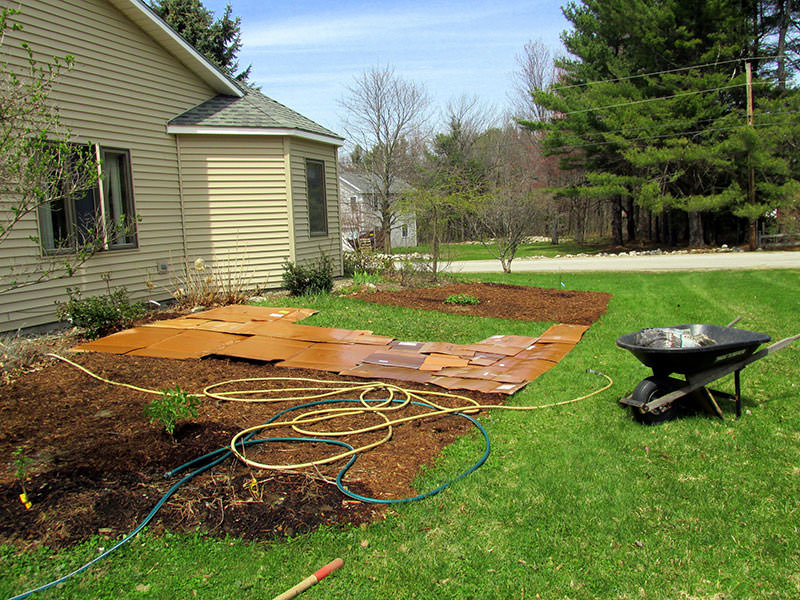 But sheet mulching does even more than that.

Beneath the layers of compost materials, sheet mulches typically include a layer of cardboard to keep grass and weeds from growing through – a great way to smother unwanted vegetation or convert a sod lawn into a garden. Before long, both weeds and cardboard decompose and feed the soil with organic matter, while you pat yourself on the back for finding such a clever way to recycle and relieve yourself of the constant chore of weeding.

Another reason to try sheet mulching: earthworms love cardboard. They literally eat it and excrete “black gold” from the other end.

The actual process of sheet-mulching is simple:

1. Get the right materials. You’ll need cardboard, mulch and/or organic matter, and manure (but that’s optional). At a minimum, you just need enough cardboard to cover the earth and enough mulch to cover the cardboard. From the there the sky is the limit: You can pile up as many layers of manure and organic matter as you want. Woodchips, straw, leaves, crop wastes, and animal bedding are all examples of organic matter – basically anything you would put in a compost pile, other than kitchen scraps, which you probably don’t want strewn about your yard.

Recycling centers are a great source of cardboard. Unless you are sheet mulching a tiny area, try to grab the biggest sheets of cardboard you can find, such as boxes from bicycles and kitchen appliances, to make things easier. Avoid cardboard with glossy color print, as the ink may not be biodegradable. Some people use a thick layer of newspaper instead of cardboard, which is efficient only for sheet mulching small spaces.

It’s critical to overlap the pieces of cardboard by at least six inches to prevent the more tenacious weeds from weaseling through the gaps to the surface, where they will quickly become re-established in the rich soil you’ve made for them. Once the cardboard is in place, wet it down until it becomes heavy and limp so it doesn’t shift around or blow away in the wind as you add layers of mulch and/or compost materials on top.

3. Add organic matter. If you’re just adding mulch, spread what you have in an even layer at least 2 inches thick on top of the cardboard and call it done. If you’re also using manure, spread it in two-inch layers alternated with a one-inch layer of organic material between each one, finishing with a final layer of mulch on top. Another option is to simply cover the cardboard with finished compost and then cover the compost with a protective layer of mulch.

Late spring when the weeds are getting out of control, but haven’t yet spread their seeds, is a great time to smother them with sheet mulch. But it can be done at any time of year. There are just a couple caveats to keep in mind:

If your goal is to plant perennials – whether fruit trees, edible shrubs, vines, or flowers – you can lay down the sheet mulch first, and come back to plant whenever you are ready, brushing aside the mulch and cutting small holes in the cardboard where you’ll dig the hole for each plant. If your perennials are already planted, work around them.

But if you want to plant annual crops, you need to let the sheet mulch decompose in place for a full year before loosening the soil for planting. If you build a really deep layer of sheet mulch – say, 12 inches or so (which will decompose to probably one-fourth that depth after a year) – you can plant your annuals the following year without even tilling the soil.

Hello, I have a long narrow patch of grass on a weird slop that ends in a small ditch which is attached to my neighbors yard. I have hand dug and replaced all my grass in the yard with plants, shrubs and trees but this last area is giving me trouble. I would like to sheet it with cardboard and then add layers of topsoil and compost and sprinkle right away with wildflowers seeds. When the seedling germinate would the roots be able to penetrate the cardboard on their own? Or should I sheet mulch it then cover with wood… Read more »

Hi! How long does it take for for the weeds to be significantly smothered? Enough so I can cut holes easily through the cardboard to plant small to medium size perennials. I live in NE and was considering doing this now, in late November, so I can get a jump on the process and hopefully see the space cleared enough to plant in mid to late Spring. Thanks for the input!

Thanks for the tips, Brian!! Agriculture mulching sheet can be two types, organic and inorganic. Organic is the best option because they can retain moisture and add nutrients to the soil as they decompose.

In July 2020 I’ve sheet mulched…cardboard over weedy lawn then compost then mulch but now I want to remove only the mulch and grow grass on top. Will grass grow on top of compost which is on top of cardboard?

Hi! Gaby here, from Chile. I was just wondering… can I use beer boxes to sheet mulch? I would say no, because of the ink. But being honest I don’t actually know much about gardening. Thanks again

Has this happened to anyone? I laid down cardboard and covered with Coco bean shells in late spring. No weeds so far, but robins have been pecking up the cardboard! Should I be worried?