The Modern Farmer Guide to Types of Apples

Whether you're headed to a U-Pick orchard this fall, or are preparing to plant your first apple tree, it pays to get the nitty-gritty on the varieties first. 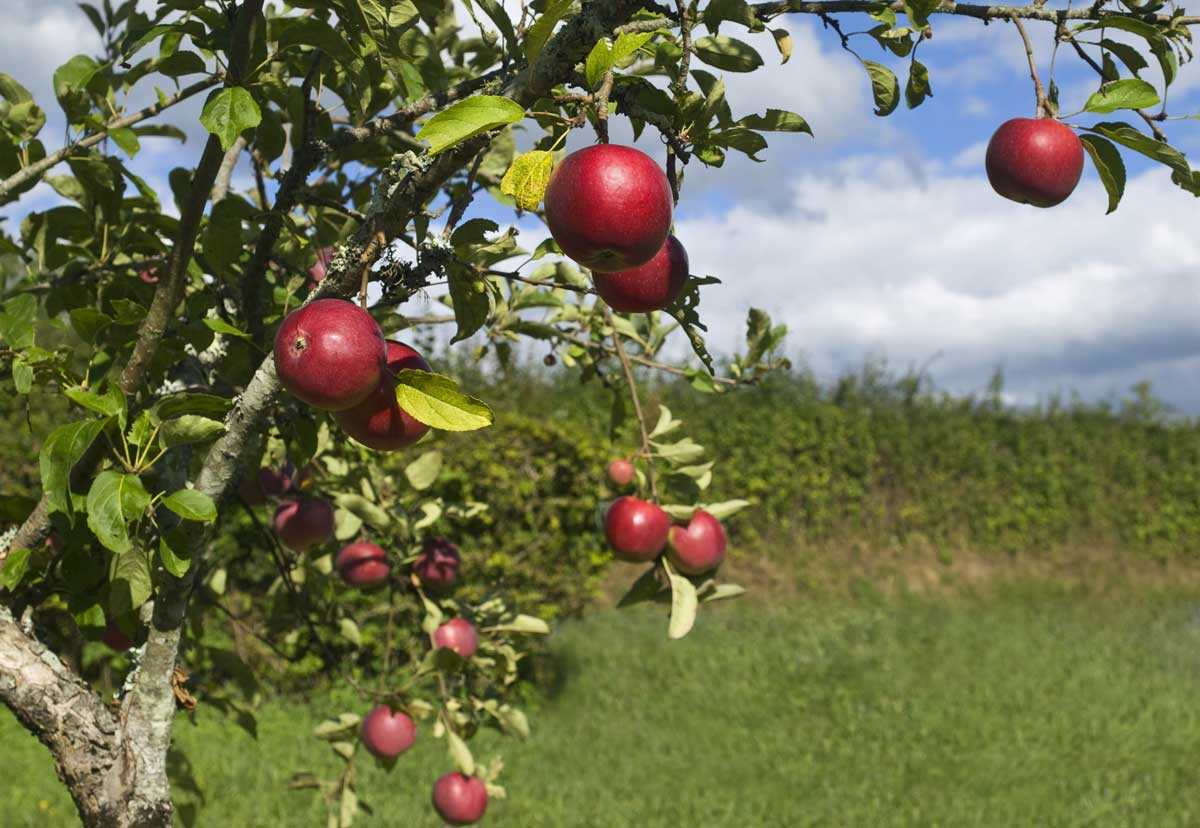 Api Etoile, a star-shaped variety from Switzerland, and Apricot – you guessed it, an apricot-flavored apple – are just two examples of the diversity that’s out there. With so many varieties to choose from, it’s helpful to have a way to classify them so you know which to pick if you’re making cider or a pie – or want to fatten your hogs.

If you’re planning to plant apple trees, there are also technical details that make the difference between a successful planting and a fruitless one. Most apple varieties, for example, require pollination by another variety – not just any variety, but one whose flowers open during the same week or two in spring. Rootstock, chill hours, and fruit spurs also come into play. No idea what those terms mean? It’s all spelled out here.

When Do You Want Your Apples?

Apples are not just a fall fruit. In fact, no other temperate climate fruit is available fresh for as many months of the year. By picking varieties that ripen at different times, you can extend the harvest from July to December. Variety listings typically designate one of three ripening seasons.

What Do You Want Them For?

Dessert: Apples that are recommended for eating fresh from the tree are referred to as dessert apples or table apples, which include American Beauty, Grimes Golden, Ribston Pippin, and Virginia Beauty. They are typically sweet, crisp, and juicy, but beyond that there is a world of flavor to explore. Early ripening apples are often the best dessert varieties.

Cooking: When making pies, preserves, and other baked goods, use drier, sweet-tart varieties (which match well with baking spices) with a firm texture (so they hold their shape after baking). Some good options: Honeycrisp, Jonathan, Braeburn, and Melrose.

Keepers: These are varieties that have been bred to last for months in a root cellar, extending the apple season into early spring when few other fruits are available. Late-ripening varieties like Arkansas Black, Brown Russet, and Mutsu are often the best keepers.

Hard Cider: Historically, most apples were cider apples (eating them fresh is a fairly recent development). Rather than use a single variety, cidermakers usually blend several varieties together based on their dominant flavor profiles. Recipes vary, but 50 percent sweet varieties (high brix rating), 35 percent sharp (high-acid/tart-flavored), and 15 percent bitter (high tannin content). For example, you might mix Rome Beauty (sweet), Winesap (sharp), and Red Astrakhan (bitter). There are also special cider varieties that are used alone, such as Kingston Black and Greasy.

Apple Juice: Any apple can be juiced, but the best varieties to use are a matter of personal opinion. One school of thought says sweet dessert apples are best for juicing, while others prefer the complex flavor in a blend of sweet, sharp, and bitter varieties, as for hard cider.

Livestock: Pigs, cows, horses, goats, and other livestock are happy to eat any apple, but certain varieties that are too insipid for human consumption have been traditionally used for this purpose, such as crabapples.

What Are Your Growing Requirements?

When selecting an apple for planting, it’s not enough to choose based on flavor or use. Some varieties may be better suited to your climate and specific growing situation than others.

Low-Chill: Apples need a certain number of hours below 45 degrees Fahrenheit each winter to produce fruit, which is measured in chill hours. The chill hours required range from less than 100 to more than 1,000, depending on the variety, and are typically listed in the variety description in catalogs. Use a chill hours map to find the number of chill hours in your area. In mild winter climates, only low-chill varieties should be planted to ensure fruit production. White Pearmain, Winter Banana, and Dorsett Golden are among those recommended for the mild winter areas of the West Coast and the Deep South.

Dwarf: In their natural state apples grow to 25 feet or more, making harvest difficult. These are called “standards” in apple terminology and are rarely grown. Instead, most apples are grown on dwarfing rootstocks – another variety of apple that controls the size of the tree (and also determines its adaptability to soil type and resistance to particular pests and disease). Different rootstocks cause different degrees of dwarfing, from the common 15-foot semi-dwarf trees grown by most backyard orchardists to 5-foot miniature apples that will fit in a patio planter.

Self-Pollinating: Most apples require cross-pollination from a variety that blooms at the same time in spring. But a select few are self-pollinating (also known as self-fertile or self-fruitful), including Alkmene, Granny Smith, and Grimes Golden, making them a good choice if you only want to plant one tree.

Multi-Grafted: A single mature apple tree may produce hundreds of pounds of apples – way more than most households will use in a season. Multi-grafted trees, where several different varieties are grafted onto one trunk, are a strategy to spread out the harvest with varieties that are used for different purposes or that mature earlier or later in the season. Multi-grafted trees are a way to fit multiple varieties in a small space and, if the varieties are compatible pollenizers, they function as a self-fertile tree.