An Internet-Connected Scale Taught Me How To Make Pumpkin Pie

I don’t bake. I don’t understand it, the delicate chemistry and dark forces that cause flour and fat and proteins to rise and turn into bread or crust. I cook, a lot (here I will plug my cooking column at The Awl), but I do not bake. A new internet-connected scale, called Drop, is supposed […] 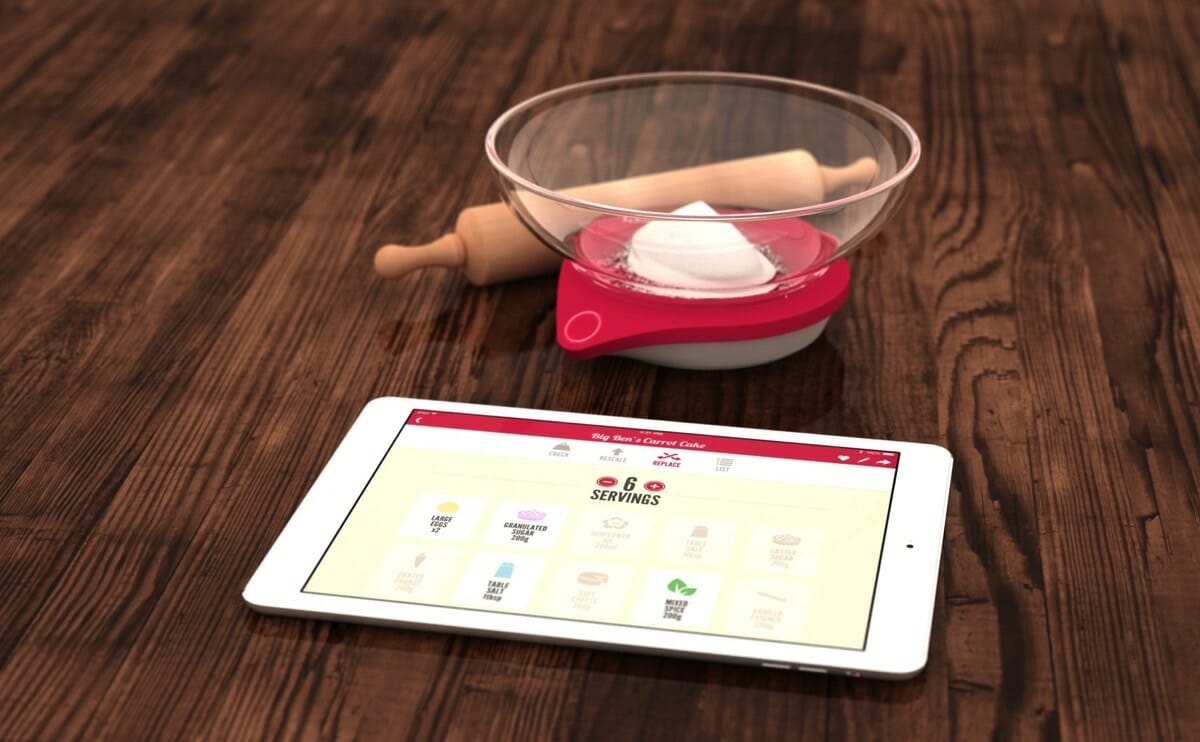 I don’t bake. I don’t understand it, the delicate chemistry and dark forces that cause flour and fat and proteins to rise and turn into bread or crust. I cook, a lot (here I will plug my cooking column at The Awl), but I do not bake. A new internet-connected scale, called Drop, is supposed to help with that, so I got one and attempted to make a pumpkin pie, something I’ve never made before, with it.

It might seem like a scale has no real need to be connected to the internet; what other responsibilities does a scale have, other than telling you how much something weighs? But Drop’s pitch is that it’s not really a scale, but instead a recipe guide disguised as a scale. The Drop hardware itself is about the same size as any other kitchen scale, with a thick red rubber surface and no display. There’s no need for a display, because it uses your iPad as its display. Only an iPad, for now, and only a newish one — no old iPads, no Android devices, at least not yet (Drop says Android support is coming soon).

What makes it interesting is that Drop uses the act of weighing ingredients as a basis for a step-by-step instruction of how to bake. The iPad app has an option to just display the weight of whatever’s on the scale, which is pretty accurate, with at most a gram difference between Drop and my regular kitchen scale, but the built-in, interactive recipes are really the selling point. You browse through a collection of just over a hundred, most from Drop itself and the other some from various other sources like Food52, and tap the one you want. Then it kicks you into an extremely elaborate and, mostly, very helpful and easy step-by-step path to baking.

I dumped way too much ginger into the mixing bowl

I picked “Madeline’s Maple Pumpkin Pie.” Most recipes start by asking you to put a big mixing bowl on the scale, then adding, one by one, the ingredients you need. Each step in the recipe is represented by what looks like an index card on the screen, and you move to the next card either automatically (when you’ve added the right amount of whatever ingredient, the scale will know, and move you forward) or for non-measuring steps like mixing ingredients together, when you tap the “DONE” button on-screen. It works, mostly, really well; when you’re pouring in an ingredient, there’s a goal line in the card telling you how much you need, and as you add in the ingredient, the line that represents how much you’ve added slowly rises to meet the goal line.

If there’s something in the recipe that requires time — in this one, the shortbread crust needs to sit for 30 minutes, and the pie itself needs to bake — it’ll automatically display a little timer in the bottom left corner of the screen while you go through all you go through the next steps. It worked perfectly for this recipe, which is helpful because I’d almost certainly have forgotten to set a timer.

Maybe my favorite part is that the app will automatically change the recipe based on how many servings you want. Reducing the number of servings is a total mess normally, requiring, it feels like, advanced calculus. If I want my pie, which is supposed to feed eight, to feed five, it would normally be basically impossible to figure out how much of any ingredient to add. But with the Drop app, you just tap where it says “Servings” and adjust accordingly. Super easy.

The only real problem I had with the recipe portion of the Drop is that it has trouble measuring small amounts of dry ingredients, like spices. For the pumpkin pie, which relies on ginger and clove and cinnamon and nutmeg, that’s a problem; I dumped way too much ginger into the mixing bowl before realizing that the Drop was not measuring the fraction of a gram I needed correctly. You also can’t substitute ingredients yet; if you want to use more brown sugar instead of maple syrup, you’re out of luck. And, my iPad got pretty gross from touching the screen with raw dough-covered index fingers.

But otherwise I found it a really easy way to execute the recipes in the app; reducing the baking process to a step-by-step like this turns baking into almost a paint-by-numbers exercise, much easier than following a more traditional recipe. But that’s also where Drop falls down, because it only has a so many recipes in its arsenal. The way Drop presents recipes is really involved; converting a regular recipe to a Drop-enabled recipe would be time-consuming, and I can’t think of a way that process could be automated. Drop tells me they’re adding new recipes “every day,” and that the recipes listed as coming from “Drop Kitchen” are created in the company’s two test kitchens (one is in Dublin, where Drop’s creators are from, and the other is in San Francisco). 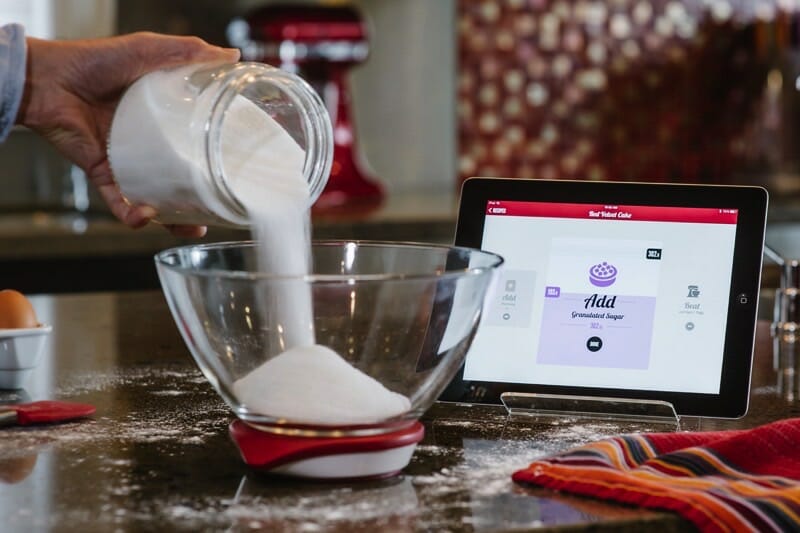 So how did the pie turn out? Well, not bad, really, although I have niggling concerns with the recipe itself, which calls for cornstarch to thicken rather than a roux, and which doesn’t require pre-baking of the crust. That said! The texture was perfect, just the right amount of gooeyness, and despite having four separate types of sugar (!), the pie wasn’t actually too sweet. The crust, which I feared the most, turned out near-perfect, which in itself kind of proves that Drop is a success: I’d never have attempted a shortbread crust without this app to guide me through it, and after I was done, it proved that it’s not really all that hard to do.

The Drop scale (the app is free) costs $100, which is very pricey for a kitchen scale, not to mention the fact that you need to have a new-ish iPad for the thing to work at all. A nice, simple kitchen scale, like this one, the bestseller at Amazon, costs about $15. Is it worth it? I’m not so sure. It’s certainly frivolous, and while the recipe I made was pretty good, there are only 120 of them. I would love if Drop had some kind of ratio measure in it, the way Michael Ruhlman’s Ratio app works; if it had simple ratios for breads, cakes, doughs, and sauces, they could easily expand the number of recipes exponentially without doing too much work. But as it stands, there’s not much room for creativity: either you make the recipe exactly the way the app wants you to, or you’re kind of stranded without a guide.

Still, I like the idea a lot, and to be honest, the iPad makes a lot of sense sitting there in the kitchen. It’s a pretty cool little platform that works basically as advertised. I just hope it builds out and really takes advantage of it, because right now it’s a little pricey for what it does.

One other note: the first review unit I received was broken, refusing to measure correctly and causing the app to do all sorts of weird stuff; Drop tells me it was a hardware problem they were aware of, but that this was “the only time this has shown up in the field, so to speak,” and that they “don’t anticipate” other customers will have the same issue. My second Drop worked perfectly.