The bees that will save the industry: the survivors. 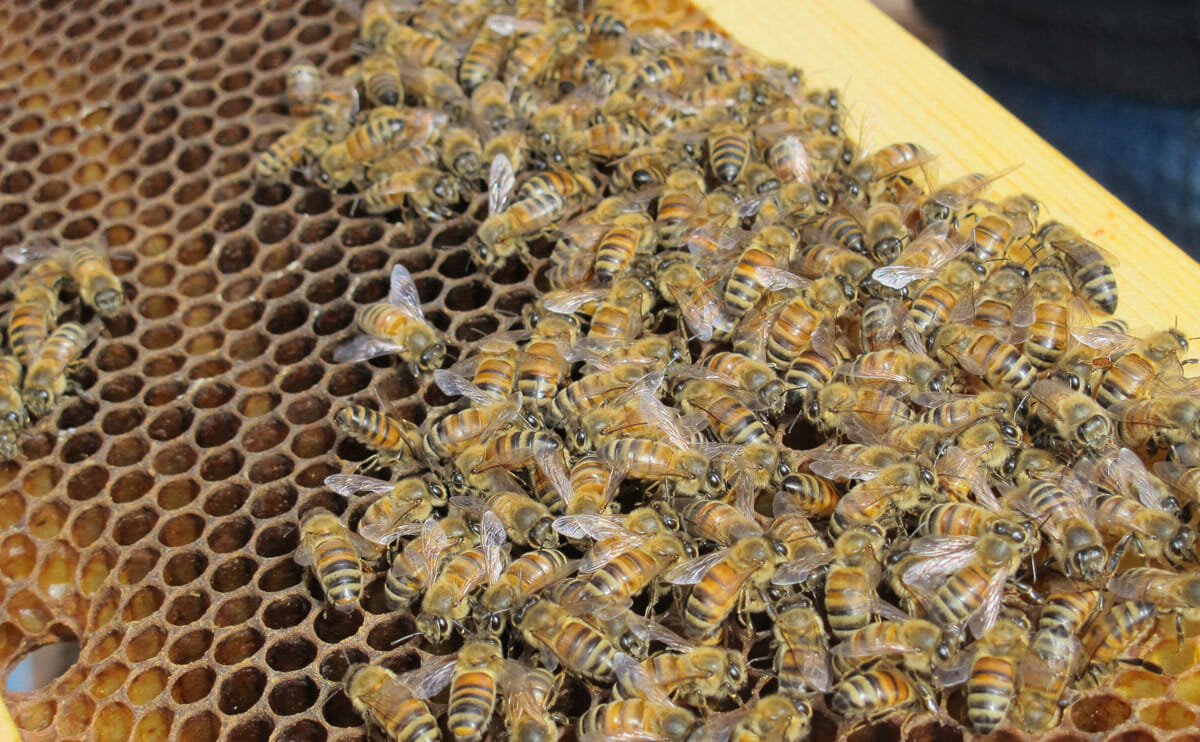 But some progress is being made. A group of honeybee breeders across the nation are looking to hardy, resilient bees they call “survivor stock” as one important step toward a solution. A host of factors likely play a role in CCD, including habitat loss, overuse of agricultural chemicals and an array of pests and diseases. Similarly, a variety of characteristics come together under the survivor stock definition.

For example, one particularly pernicious pest, a parasitic mite native to Asia and aptly named Varroa destructor, can destroy a hive in months. Varroa mites arrived in the U.S. in the late 1980s and have caused significant losses across the country since. In addition to feeding on bees, Varroa, like mosquitoes carrying malaria, are vectors for bee diseases.

While there is no standard definition for “survivor stock,” longevity and natural pest resistance are key.

Most commercial beekeepers treat their hives with a pharmaceutical poison to control the mite, but the pests are developing resistance to the treatments, and the chemical residue can wind up in the honey and comb. It takes, at most, 18 months for varroa to kill a hive, but some hives have a genetic resistance, or have extra hygienic behaviors, and will continue to thrive without pharmaceutical treatments despite a small varroa presence. While there is no standard definition for “survivor stock,” this longevity and natural pest resistance are key.

Another element is hardiness. Near the town of Truchas, New Mexico, nestled under the soaring peaks of the Sangre de Cristo Mountains north of Santa Fe, several dozen beehive boxes dot the meadow at the Zia Queenbee Co. The owners, Melanie Kirby and Mark Spitzig, collect a few jars of honey each year, but their main products are their survivor queens. They are both queen breeders and producers. They isolate specific stock for mating breeder queens and raise up to 3,000 production queens ready to take over or start new hives. Kirby and Spitzig define their survivor stock as hives that have survived two winters, and they cross their breeder queens with drones (male bees) from hives that have lasted at least three or four.

Honeybees have an unusual breeding strategy that makes breeding on most farms an inexact science: A virgin queen may fly several miles in search of drones, which congregate in groups of up to 2,500. She mates only once, storing the sperm of 10-20 males to build her colony throughout her lifetime. Breeders like Kirby and Spitzig, as well as bee clubs from California to Colorado to northern Michigan, Virginia and Pennsylvania, reduce the element of genetic surprise by saturating a region with healthy survivor hives.

However, this approach is not without its own issues. Just as diversity is important to a healthy ecosystem, it is necessary for a strong, fit hive. That’s why Susan Cobey, a bee geneticist at Washington State University, worries that restricting bee breeding regionally in this way limits genetic variation. “Bees are incredibly susceptible to inbreeding,” she says. “If your population gets too small, which is really what selection does – you’re thinning out for what you want – then you get in big trouble.”

Back in New Mexico, Kirby shares that concern. She infuses her bee yard with survivor stock from as far away as Vermont and Oregon. “You still have to bring in stock, or you’ll have a collapse,” she says. She hopes to receive funding to help build a national network of survivor stock breeders to encourage more trading.

Cobey is also a bee breeder, but confines her work to the lab. She’s found a different way to avoid the difficult bee breeding habits: She is one of the leading experts on instrumental insemination, a process of collecting sperm – called “germplasm” – from drones and using it to fertilize young queens. The process is pretty simple and straightforward, she says, but you have to be comfortable with a microscope and good with your hands.

Instrumental insemination allows Cobey to collect semen from specific drones with good genetics to make desired crosses. It is also helping to reinvigorate the honey-bee gene pool in the U.S. Since 1922, when the U.S. government banned live imports of honeybees to help curb the spread of a destructive tracheal mite attacking hives in Europe, American bee colonies have remained largely isolated. Periodic die-offs, including the recent CCD, have further bottlenecked the gene pool. Since European settlers introduced honeybees to the New World, only a handful of the world’s 28 subspecies have dominated the North American landscape. Germplasm imports, however, can introduce a jolt of genetic variety into American honey-bee stock.

And while there is a growing interest in beekeeping, a lack of experienced keepers is its own problem. In New Mexico, there aren’t enough producers to meet the blossoming demand of backyard beekeepers. That becomes a problem when aspiring beekeepers find a cheap source online and ship in bees knowing nothing about their history or health, says Kirby. “We do need more beekeepers, but we need more conscientious ones, and not all in one place,” says Kirby.

Unfortunately, there are more interested hobbyists than experts able to provide adequate training. “You have a lot of new beekeepers on the hobby level, and they are getting this advice to not treat [for varroa] and see what survives,” says Cobey. Varroa is very difficult to detect before it’s too late and once a hive becomes infected, the mite can quickly spread to other hives in the region.

Despite the many complications and potential pitfalls, infusing the landscape with survivor hives can help with overall resiliency. And, Kirby says, an increasing demand for survivor stock will encourage large-scale producers to supply it. “It does indeed take a community to raise bees.”

(Photo Credit: Top image by Panicha Imsomboon. All others by Katie Mast.)