A low-tech, inexpensive solution to an age-old problem. 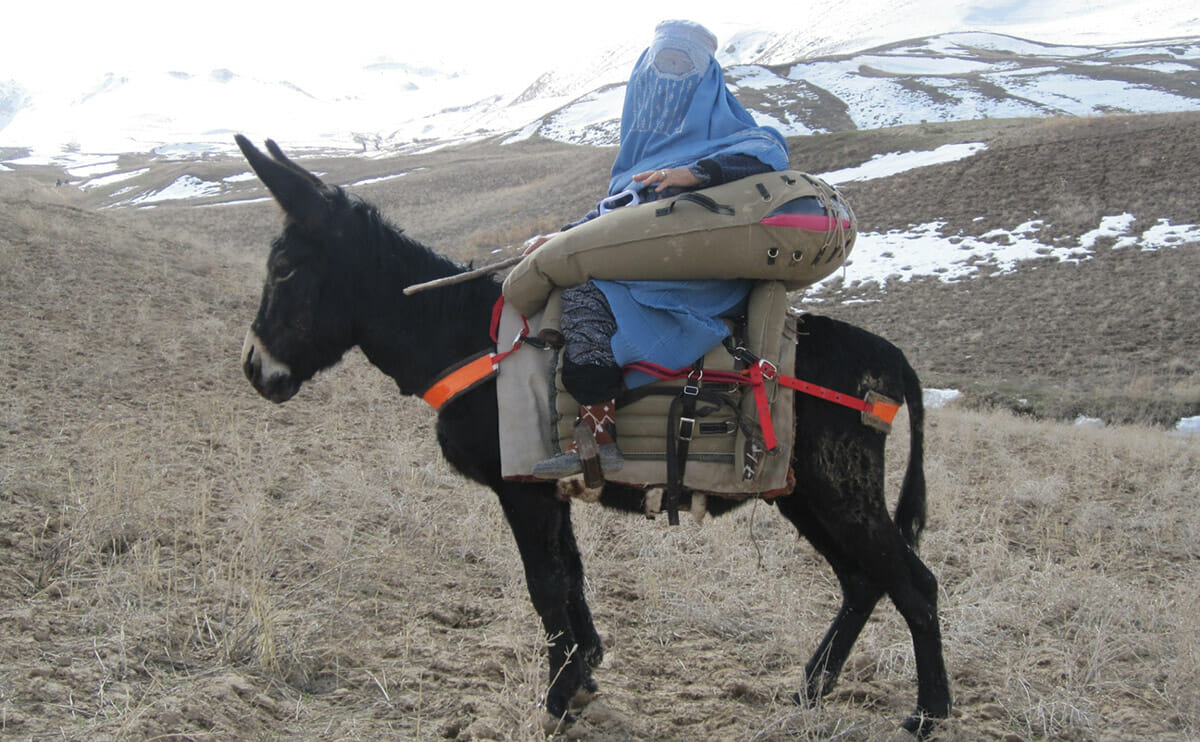 When the U.K.-based charity HealthProm – an organization that supports health care for women and children – asked women in northern Afghanistan how to improve health services, many said that expectant mothers needed a better way to reach health centers. “If you take it that the average labor after the first child is about five hours,” says Stewart Britten, the group’s project manager for motherhood programs in Afghanistan, “if it’s a three hour journey, women are not going to risk it.”

The donkey ambulance is a low-tech, inexpensive solution to this age-old problem. Beginning early next year, the device will be ready for production, and — we hope — will bring glory to the animals that make them possible.

Northern Afghanistan is a rugged, mountainous landscape, difficult to navigate except by foot or four-hooved animal (or helicopter). HealthProm suggested a number of possible solutions for getting women to treatment centers, including a wheeled cart, but eventually, the women they spoke with decided on a traditional mode of transportation, “which is to put a bag of straw on either side of the donkey, and put the woman in labor in between the two bags,” says Britten.

As of 2006, there were 41 million donkeys spread across the globe, the majority in developing nations. In this region of Afghanistan they are extremely common; Britten guesses that almost every family has one. “In Afghanistan, people say that a horse eats as much as a family, but a donkey eats whatever is around,” says Britten. And they’re perfect for navigating the difficult terrain. However, the heavy, hay-stuffed saddles were uncomfortable and put tremendous strain on the animal.

He discovered he could make the saddle much lighter than it’s traditional predecessor by using inflatable elements.

When Peter Muckle happened upon the project, he thought he could build a better saddle than the awkward, chair-like designs HealthProm was considering. Muckle keeps four donkeys on his farm in the U.K., where they do light work, but, he says, “In the back of my mind I had an idea of learning about them and somehow connecting them with how donkeys work in Africa.” Muckle’s father, a retired agricultural engineer living in Kenya, built a donkey-drawn ambulance for use in less rugged terrain. While a cart wouldn’t work in the mountains, Muckle knew the donkey’s unique skills would still be valuable. “They can walk on very narrow paths because they have this threading walk where they put one foot in front of the other,” he says.

Since first attempting the ambulance design two years ago, he has made about 15 prototypes, testing them on his own donkeys before sending them to Afghanistan for trials. From the beginning, he discovered he could make the saddle much lighter than its traditional predecessor by using inflatable elements. “I ended up first using an inflatable pool lounger,” he says. “We cut the seat out and adapted the shape using a canvas cover,” while foam swim noodles made up other pieces of the design. Previously, maternity saddles weighed roughly 100 pounds; with a pregnant woman on top, it was easily more than a 200-pound load. “A donkey with that amount of weight is carrying virtually its own body weight,” says Muckle, “which is possible for them in short distances but is not safe” for either the animal or the mother-to-be. In contract, the donkey ambulance Muckle designed weighs about 10 pounds.

While beginning his design, Muckle sought the advice of Chris Garrett, an independent consultant for the U.K.’s Donkey Sanctuary who specializes in making harnesses. Garrett takes donkey comfort seriously; he has worked around the globe teaching people how to make effective harnesses from local materials. “If you can put a good harness on it, the animal only has to put in 20 percent effort for 100 percent output,” he says. “That way the animal stays strong. And we prove that time and time again.”

Garrett suggested that Muckle look at Egyptian and Ethiopian saddles for inspiration, which put Muckle on the path to the current design. The saddle is deceptively simple: two inflated arms hold the pregnant woman on the donkey, while another pad sits at her back. The saddle is built to be comfortable for the woman and the donkey. “If [the donkeys] are very skinny or they don’t have any fat over [their backs], it rubs over the area with nothing to protect it. We’re trying to help protect as much as possible these areas,” says Muckle.

According to Britten, the response to the prototype in Afghanistan has been positive; “They like it,” he says. “I think a very important aspect of it is that we didn’t have to go and devise something totally new. What the women wanted was just a variation of what they already had.” The testing is now coming to a close and production of the maternity saddles should begin in Afghanistan in March or April; then the group will be able to track the device’s impact on maternal health.

Other opportunities for the heroic donkey to step in are already being planned. Britten hopes to develop a device that will turn the donkey’s motion into electricity, allowing for a light to guide expecting mothers on nighttime journeys. Garrett continues teaching harness making around the world, always startled by the increase in profits reported by improved-harness users (if you happen to have advanced knowledge of pack saddles, his group would love to talk to you!). And Muckle, through the nonprofit he formed this year, SaddleAid, is planning to set up pilot projects in Morocco, Lesotho, Ethiopia and South Africa, and wants to experiment with saddles that could help disabled children reach schools.

Finally, the donkey may receive the respect it so richly deserves. This noble animal will continue to rush in where horses fear to tread. Just ask any donkey enthusiast. As Garrett says, “You hitch them up to something and they’re in the harness and they start to move, and it just makes the hair on your neck stand up sometimes. It’s incredible. It’s a wonderful thing.”